It is always exciting for me when I get the word back that a meteorite has finished being classified and is off to be approved. That happened several weeks ago for Paul and me. Three meteorites I had found while cutting a mixed box of stones looked unusual enough to warrant being sent off and classified.

NWA 10731 as it is now officially known turned out to be a little gem of a stone. It has ended up with a classification of “L3-6 genomict breccia” but the story is more interesting since the stone was right on the edge of another classification. It was a single stone of 1439 grams. Nothing about the outside was unusual. It has a nice exterior, no cracks, solid stone with a generally light matrix and all its metal which explains the W1 weathering state it was given. As soon as I cut it I thought this one needs to be looked at better before we just slice it up and sell it. 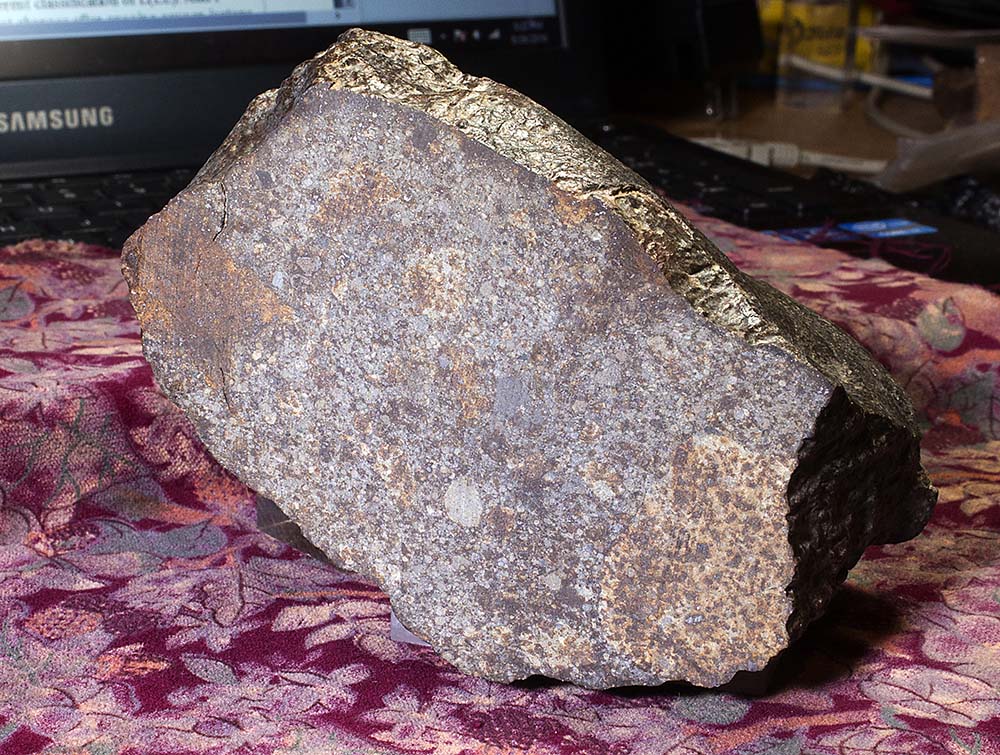 The first thing I noted when I cut the end off the main mass was the striking breccia. It was different then what we see many times. The textures in the several lithologies were widely different. The large clasts were distinctly different in color also. I immediately struck by how pretty it was. There was a reddish brown group of clasts, and a gray group, and masses of very dark almost black rock. There were large inclusions that were light colored and featureless which looked to have no visible metal. I could see that the reddish and gray areas were some kind of ordinary chondritic material but the dark patches looked like melt pockets. Much later when I looked at these under a microscope the metal in the dark patches was quite normal in regard to abundance, size and shape of the metal grains. Often in melt pockets the metal will be round blebs rather than the normal irregular shaped grains. Also a portion of the metal will often be extremely tiny round blebs mixed with the larger round or oval blebs. The metal in the dark patches of NWA 10731 was normal and more careful examination under magnification revealed that there were hard to see chondrules in the dark patches. This would also seem to rule out being areas of melt. When the work on the stone was done I made a comment about the dark patches to the classifier. I had just sliced up a batch of pieces and could not remember if the dark patches I was seeing had been so prominent in the two pieces I had sent for classification. I was assured that there had been dark areas in the samples and was given a very nice explanation of what the dark regions are. I will repeat that explanation here. “The metal and sulfide have been fluidized/melted and make up the material between the chondrules, so the area is opaque/dark, but chondrules are still visible.” So in a sense the areas are melt but not the same as the glassy melt seen in NWA 7347 or Chico where the metal is tiny blebs and the chondrules are melted away.

Some of the inclusions I had seen were igneous and free of metal and sulfides. There were several other types of inclusions I had not seen before sending the specimen off. I never seem to think about photographing the pieces that I send for classification. I can see at this late time in life that it is a great idea and will try to remember in the future. Another large inclusion in the sample was triangular shaped and turned out to be type 6 material. There were additional areas of type 6 material in the sample. However, the material of the main lithology turned out to be made of a mixture that contained 20% type 3 material.

After I cut and finished the slices to a fine polish I took them to my macro photography station to image some of them for this article. What I immediately discovered was the large number of troilite inclusions that were in the stone. I have included several of the images here. Each piece I had prepared contained numerous small spots and two or three larger inclusions of troilite which is an FeS mineral. I found myself running to the Meteoritical Bulletin write up to see what it said about iron sulfide. It stated there was FeS everywhere, in veins, in melt areas, as rims on chondrules and inside of chondrules. There is something about troilite that I like. I am always pleased when I find it in meteorites be they stones or irons. I think it is the bronze color and the fine grainy texture. It is just very pleasing to my eye. And when there is metal on the side or partly enclosing the troilite inclusion that is just a bonus. I found a few of those during my imaging session on NWA 10731.

The following images are of the troilite which is abundant in NWA10731. Some occurs as large inclusions and much is spread everywhere are tiny bits and amoeboid masses. Some mixed Ni/Fe and troilite inclusions are seen also. 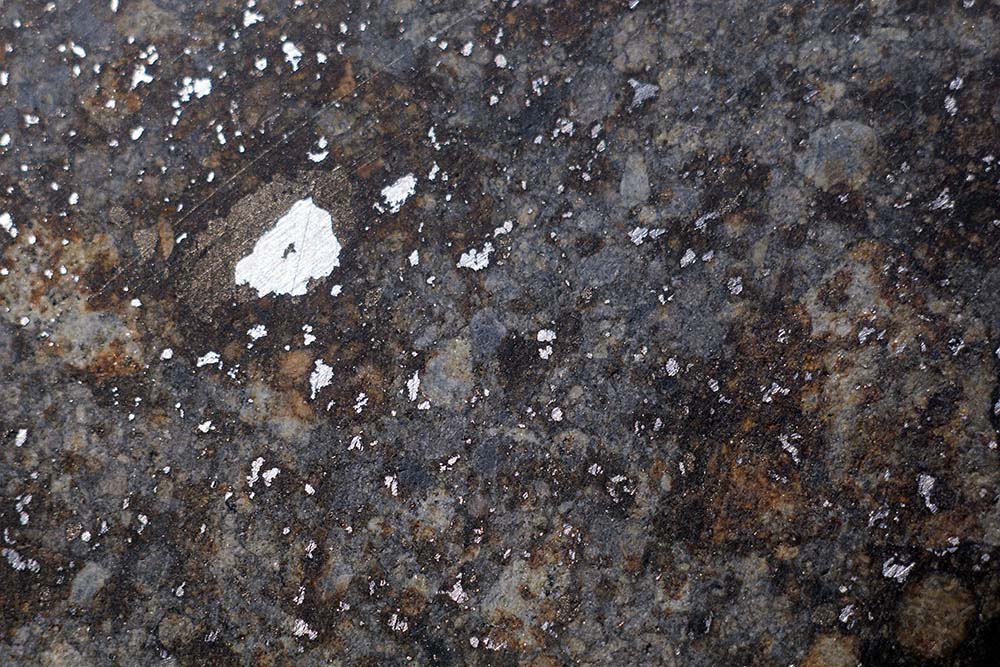 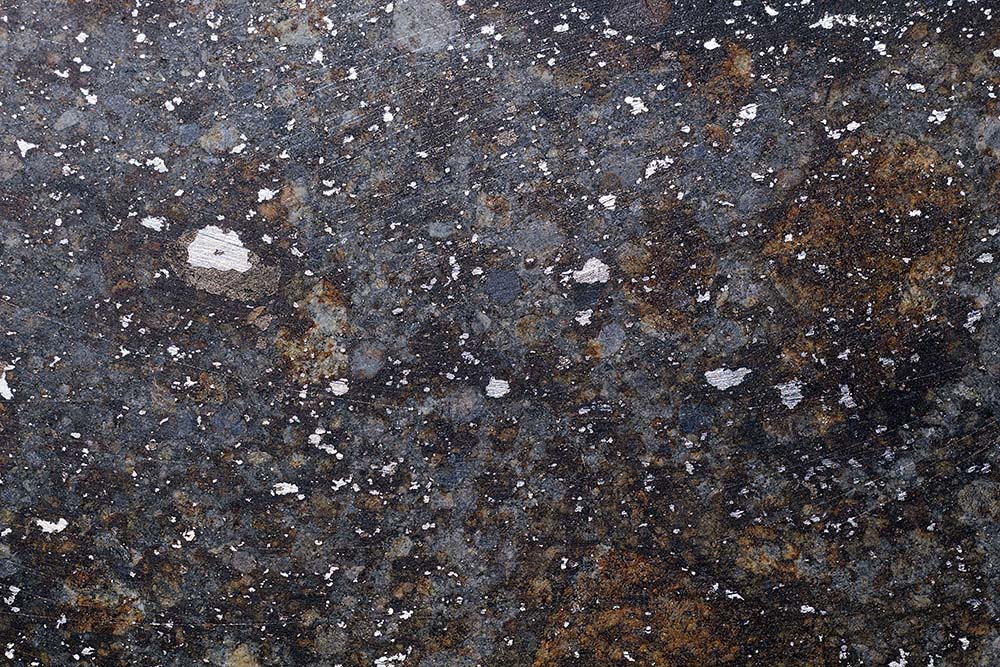 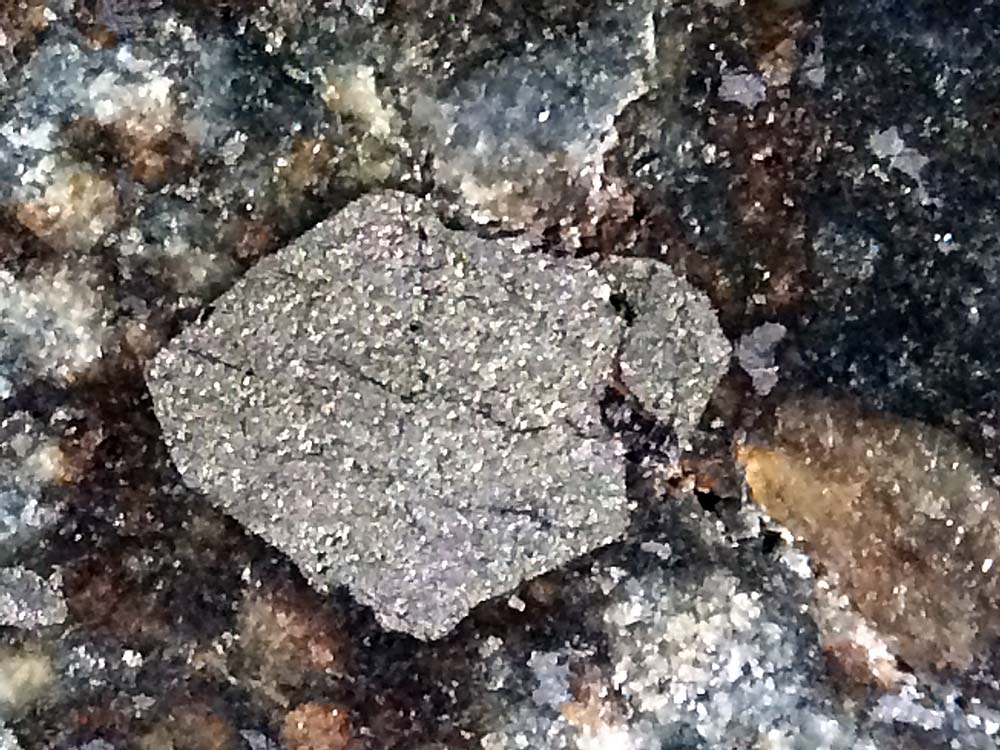 I don’t presume to understand all that has been included in the Meteoritical Bulletin write up on NWA 10731. There are numerous minerals that were found and I have not gone anywhere to see what they are. Maybe I will later. But the mention of metallic copper did get my attention. I kept my eye out for any while the slices were under magnification. I did not see any, it may be that the particles are very small. I would not know what to look for other than if I saw a coppery glint of light. But it is fun to know that it is in there still, metallic copper in meteorites is not very common. 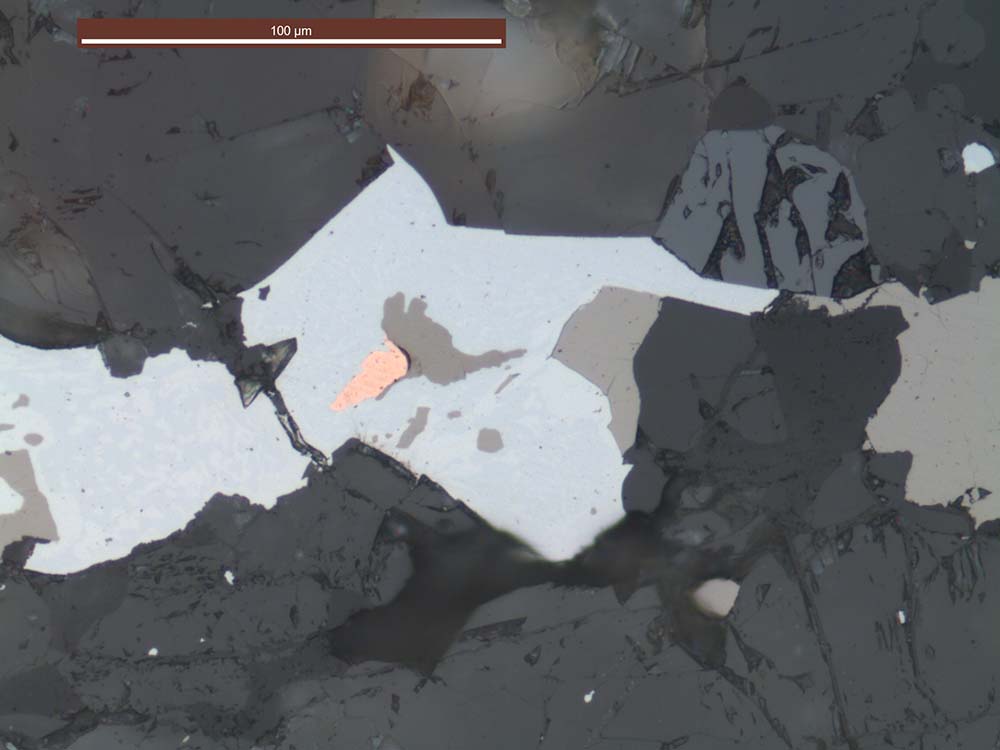 The write up on NWA 10731 is the most exhaustive report on any meteorite that I have ever submitted. And there was a bit of discussion before it was approved about how it should be classified. There were areas that were so borderline LL that it almost received a different classification of L(LL). And I understand that it is still being examined and could perhaps get changes after ongoing oxygen isotope work.

Thinking about some of this as I prepared the pieces encouraged me to do a little nicer surface preparation. On an ordinary chondrite I would normally have left one side at probably 600 grit to show off the chondrules with the best contrast. And I would have finished off the other side to 1200 grit which is a low polished shiny surface free of most visible scratches and streaks from the other diamond laps. But these I finished to 1200 on the backside and I put a polish on the front with 50,000 diamond mesh which is a nice high polish. When they made it under the macro lens I was very pleased that I had done the extra work. I can occasionally image the structure of chondrules when the light is adjusted right and slices are finished this way.

I want to take this opportunity to thank Cascadia Meteorite Laboratory for all their work on NWA 10731 and especially Dr. Melinda Hutson and Dr. Alexander Ruzicka for the time they spent on this stone. These scientist are busy and have many responsibilities beyond their time in the lab. I want to be sure that credit goes where it is deserved to these hard working meticulous scientists. All most of us on the receiving end of their work ever do is cut off a piece and mail it away.

I admit to being very excited about what was found. It always adds a lot to the meteorite for me to have it classified. I wish I could get all the stones studied, but that is impractical today. It is gratifying to know that this meteorite had some features not commonly seen and that some knowledge and information was added to our understanding of the solar system through its study. We have always thought that providing information and knowledge about meteorites had to be a large part of what we do as well the selling . I am happy that this meteorite is offerings some fascinating opportunities for study to the individuals that end up buying it.

The Meteorite Exchange, Inc. was born in 1996 with meteorite.com and Meteorite Times Magazine in 2002. Still enthusiastic about meteorites and all things related to them, we hunt, collect, cut and prepare specimens. We travel to gem shows and enjoy meteorites as much now as in the beginning. Please feel free to share any comments you have on this or any of our other sites.
PrevPart 2 – Tektite or Impactite or Obsidian Pseudo-tektite?
An Interplanetary Ambassador: The Gibeon MeteoriteNext