The year was 1961, and it all began with Dr. Carleton Moore and Harvey H. Nininger.

Arizona State College was now Arizona State University, and with the name change came the goal of emphasizing the research activities of the new university. The Research Coordinator was George A. Boyd who was very familiar with the Nininger Meteorite Collection. With a grant from the National Science Foundation and additional funds from the International Nickel Company, whose Vice-President, Herbert G. Fales was an avid meteorite collector. The collection was bought on June 8, 1960 and moved from Sedona to Tempe. Thus the Center for Meteorite Studies was created
Dr. Carleton Moore, who had recently completed a doctorate on the topic of chemical groupings of chondrite meteorites at California Institute of Technology, was appointed as the Center’s first director. The original collection was made up of 677 distinct meteorites and the primary directive was that the meteorites must be “available primarily for purposes of scientific research by qualified scientists throughout the History of the Center”. Dr. Moore remembers that: “When I came there were very few of us that knew anything about meteorites,” says Moore, who was 29 years old when he began his career at ASU. “At that time, it was mostly chemists who studied meteorites. In the beginning, we just had a small room in the C-wing basement and everything was in steel cases; that’s where they put the meteorites before I came. And then chemistry abandoned a lecture room between the C wing and the B wing and we were given part of that for the meteorites. We eventually moved again to where the vault is now.”
After more than 40 years of dedicated service, Moore retired from ASU in 2003 but to this day he actively participates in the Center’s education and public outreach activities, and numerous public speaking engagements that reach hundreds of educators, students and members of the public each year.
Former NASA administrator Laurie Leshin was a professor in the ASU department of geological sciences and an ASU alumna, when she was named the new director after Moore retired. In 2006, Meenakshi “Mini” Wadhwa, then curator of meteoritics at The Field Museum of Natural History in Chicago, was named director of the Center and professor in the School of Earth and Space Exploration in ASU’s College of Liberal Arts and Sciences. And then Laurence Garvie joined the Center as Curator of the Meteorite Collection. 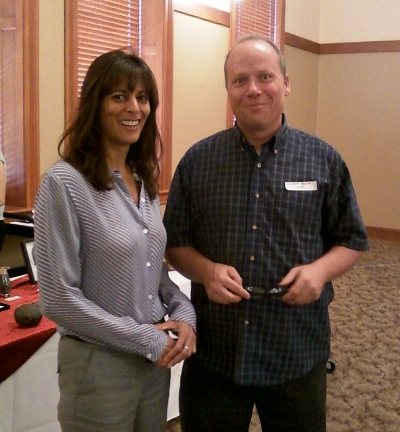 On October 21, 2011, ASU celebrated the 50th year of the Center for Meteorite Studies with a symposium attended by the Who’s Who of the World of Meteoritics, and I was invited.

Dr. Moore welcomed everybody with coffee and a short introduction, and then we all settled to a full day of learning from the masters:

11:15 – Andrew M. Davis – University of Chicago
The role of analytical advances in the advancement of Cosmochemistry
(or how the scientists are getting deeper and deeper into the meteorites)

1:45 – Caroline Smith – The Natural History Museum, London, UK
Meteoritics: The Significance of Collection and Curation on the State of the Field
(or how the Curator of a State-owned facility maneuvers around and through a tangled thicket of laws, rules and regulations, both domestic and international)

2:30 – Philip R. Christensen – Arizona State University
The Complementarily of Remote-sensing and Laboratory Analyses in Planetary Science
(or how the machines are taking over!!! And I thought that a electron microscope was complex!, a toy compared to some of the machines of the future!)

4:00 – Cocktail Reception, University Club
(or a great time to ask questions, and get to know a little about all of those people) 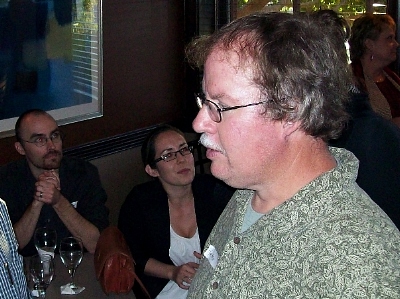 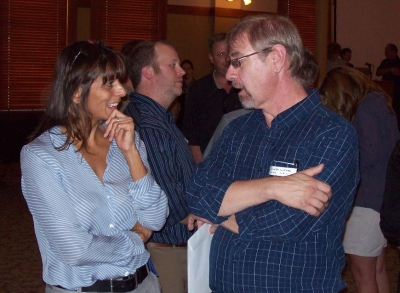 7:00 – Timothy J. McCoy – Smithsonian Institution
Dawn: A journey to the Birth of the Solar System.

Then Laurence Garvie opened the Vault, just a marvelous and very large candy store for any meteorite enthusiast! 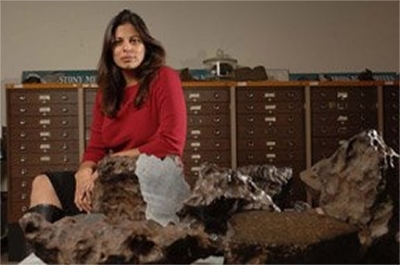 Dr. Mini Wadhwa in the Vault
(Photo courtesy of ASU) 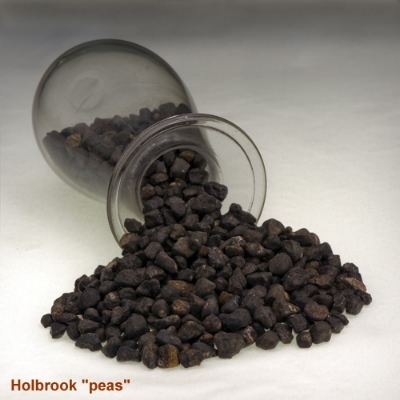 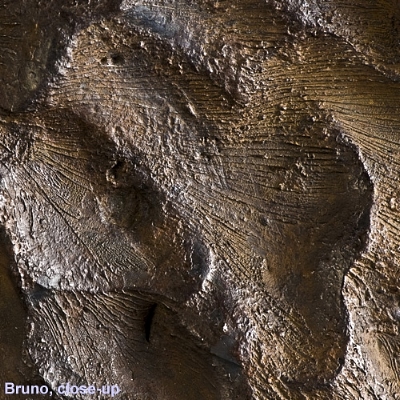 The next morning, most of us assembled bright and early on the steps of Old Main, with coffee, coolers and wearing sturdy walking shoes. We were all going to Meteor Crater for a very special grand tour of the whole site with commentaries and explanations by Laurence Garvie and Dr. Dave Kring who knows every corner of the whole crater from the bottom to the rim. 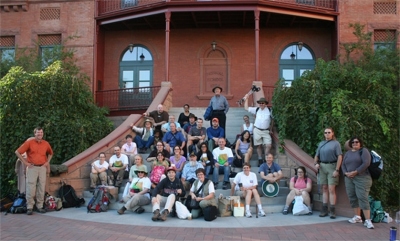 In front of Old Main at ASU: Dr. D. Kring (left) and the whole group
(Photo courtesy of Rik Hill)

Words are truly insufficient to describe Meteor Crater, so allow me to describe it with pictures, after thanking Dr. Wendy Taylor (Assistant Director, R. S. Dietz Museum of Geology, School of Earth and Space Exploration, ASU) for allowing me to pick and choose through the 398 pictures she took on this day. 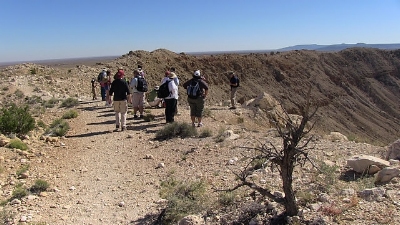 Time–out to enjoy the scenery

Of course, the whole of the crater

Another example of the force of the impact: this rock was turned
upside down (the older layers are on top, above the younger layers)

Layers of ejecta on the outer slopes of the crater. In the distance:
San Francisco Mountain, the dormant volcano north of Flagstaff 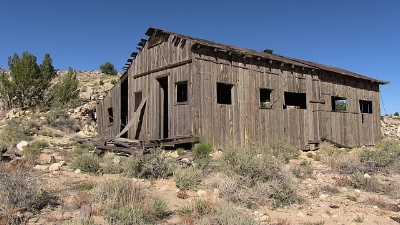 Ruins of the mining camp built for the employees
of Daniel M. Barringer a little over a century ago

And now I would like to thank very sincerely Mini Wadhwa, Laurence Garvie and all the people of ASU who made me feel very welcome and who put together a great celebration of their first 50 years. I wish them many, many more.

This article has been edited by Norbert Classen