It isn’t every day that a new crater is discovered on the Earth but we have been very fortunate that several have been found in the couple years that had meteorites associated with them. The similarities of the meteorites found at Gebel Kamil and Whitecourt is going to be my topic this month.

The physical properties of iron meteorites definitely helps in the survival of greater numbers of fragments then is the case of stone type meteorites which form craters. Other than Dalgaranga and Carancas meteorites are lacking from most stone asteroid cratering events. Weathering and quicker total terrestialization of stone types may also lead to their not being found around craters.

The magnitude of the crater event also plays a role in whether fragments can survive. Smaller event will leave more meteorite fragments recoverable then huge impacts. In the case of both the Gebel Kamil and Whitecourt events they were on the lower end of explosion energy. Larger events may form more glass and melted rock while they vaporize more completely the original impactor.

There is always the need with irons found at craters to make a first visual decision about their form. Are they individuals that fell separate from the main crater forming body? These would be likely pieces that broke off during passage through the atmosphere. Or, the other possible decision to be made, are they torn apart shrapnel fragments that were blasted out of the crater? On very old meteorites like Odessa and sometimes Canyon Diablo it is nearly impossible to be 100 percent sure. In the case of both of these there has been so much time and weathering that most of the smaller pieces were shaped through other processes and have little relationship to how they looked immediately after landing. Large pieces however, from Canyon Diablo or Odessa often still preserve their appearance as individuals. One can say with more confidence that the pits in large meteorites are actually regmaglyphs from flight and not the pits from rusting or the cavities of lost graphite nodules which have weathered out.

Here is a challenge for the reader. Pick out the real meteorites in the following photo. 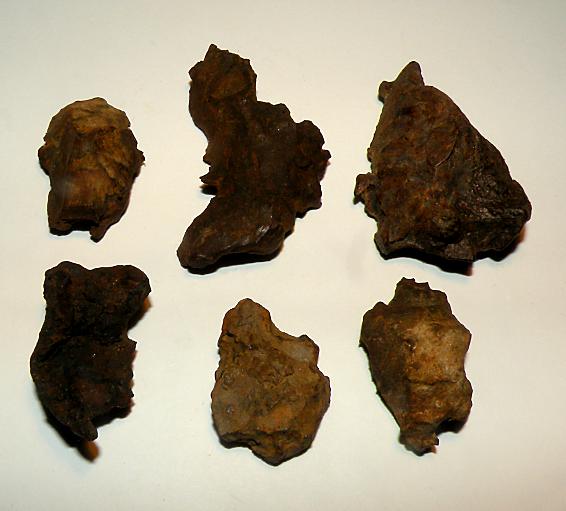 In the case of the following samples of Gebel Kamil and Whitecourt the evidence is much clearer. They are shrapnel fragments. They are metal torn by tremendous forces when their original mass struck the Earth. They show around their edges rolled and twisted thin metal. On the broader surfaces there will usually be striations; lines marking where the metal was ripped apart. The Sikhote Alin fall produced thousands of fragments of meteoritic shrapnel. Fragments from there show these features as well even though most people would not consider Sikhote Alin an explosive impact cratering event. It did produce several large impact pits where massive meteorites were recovered. In explosive events the meteorite is mostly vaporized and the crater is excavated by explosive forces. Impact pits on the other hand are holes in the ground made by the large body just pounding itself into the ground where it fell. There is no real displacement of rock in an impact pit.

The Kamil Meteor Crater is a 45-meter-wide, 16-meter-deep hole blasted into the Egyptian desert. It is likely only a few thousands years old. The Whitecourt Crater is just slightly smaller at a diameter of 36 meters with a depth of 6 meters. It appears to be younger at around 1100 years of age. The Gebel Kamil fragments show what would be expected. They are sandblasted on the exposed surfaces and have thin patinas of oxide. Whereas, the Whitecourt fragments from the wet forest environment show much greater weathering with thicker layers of oxide and often flaking and beginnings of cracking. Even with these differences they are remarkably similar in character and shape. Making one think that similar material acted on by similar forces, will react in a similar way. Nothing shocking I guess, Sherlock Holmes would probably have just said “elementary” to that last sentence. Yet it is still interesting to place the specimens next to each other and see the results of similar forces demonstrated in a single glance.

The twisted and rolled edge of a Gebel Kamil

The real meteorites in the first photo are top row right Gebel Kamil and bottom row middle Whitecourt. The rest are bomb shrapnel pieces collected in the Mojave Desert in a most unlikely location years ago.

As a little side note this month I have the follow picture to offer. About a year ago I was asked to work with a nickel test to see if it had application for the manufacture as a tester for meteorites. After trying it on a wide variety of meteorites I found it to be unreliable and reported my results to the manufacturer. But, I recently had need to try it again and the results were the same. It is still not very useful for meteorites. But, I thought it might be of interest to show how such simple tests do not work on meteorites. The only good nickel test I have found for meteorites is to go all the way with proper chemicals and proper time honored procedures. But, here are some swabs from the commercial nickel test. 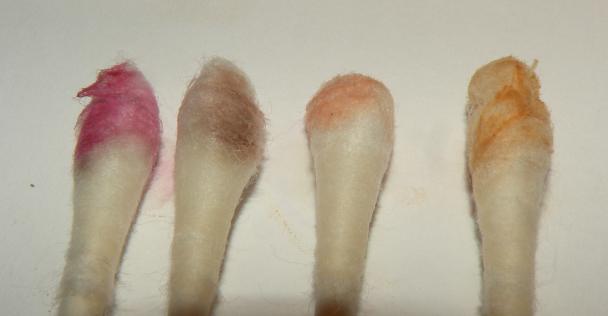 Second swab from left, very slight reaction to a slice of Gibeon. Not a pink reaction more of a purplish black.

Third from left outside of an ataxite individual. Very slight reaction, you can see just a hint of pink to the orange caused by removing a little oxidation onto swab.

Reaction to a piece of rusted iron is swab on right. Nearly the same as last swab no reaction at all except to clean  the surface. This is the reaction it should have had since there is no nickel in the sample.

Until next month have fun with your space rocks there is much to learn.

The Meteorite Exchange, Inc. was born in 1996 with meteorite.com and Meteorite Times Magazine in 2002. Still enthusiastic about meteorites and all things related to them, we hunt, collect, cut and prepare specimens. We travel to gem shows and enjoy meteorites as much now as in the beginning. Please feel free to share any comments you have on this or any of our other sites.
PrevHappy New Year
Hessle, Sweden It’s a Baseball! It’s a Lollypop! It’s Gunpowder! Nope, it’s just a New Years Day MeteoriteNext