You Can Never Go Back

Times change and they say that you can never go back to the way it was in the past. That is certainly true about meteorite collecting. There are a few of us out in the world that remember having to be on waiting lists with dealers. We would tell them what we wanted and hope in the next few months or years that a piece of the meteorite would turn up for sell. It may be that method that led me away from type collecting to a more unfocused style of collecting. There was a time in the recent past when there was just one diogenite and it was $25 a gram. That was a lot of money for a stone but, at least you could fill that category. However, if you wanted a howardite you were pretty much out of luck. There was one but you could not have any of it.

Today, if you have the money and the time I would guess that you could click a mouse and nearly fill a type collection. I suppose that makes this the best of times for meteorite collecting. Though it has created a different atmosphere for both the dealers and collectors. The question that is constantly asked now is “how much does the piece cost?’

Cost was always a concern of course. But, today the economics of meteorite collecting have shifted a little. There are lots of dealers, many selling the same material with prices often all over the place. And you can have any classification of meteorite you want. Lunars were unheard of only a few years ago now you can choose between many different classification of meteorites from the Moon. Martians the same thing many available even a chassignite. Something that is really different from the past is the unclassified meteorites we all have in our collections. There was no such thing as an unclassified meteorite. In fact it was not a meteorite officially until it was classified. Now and forever more there will be thousands of unclassified stones floating around collections of meteorites. 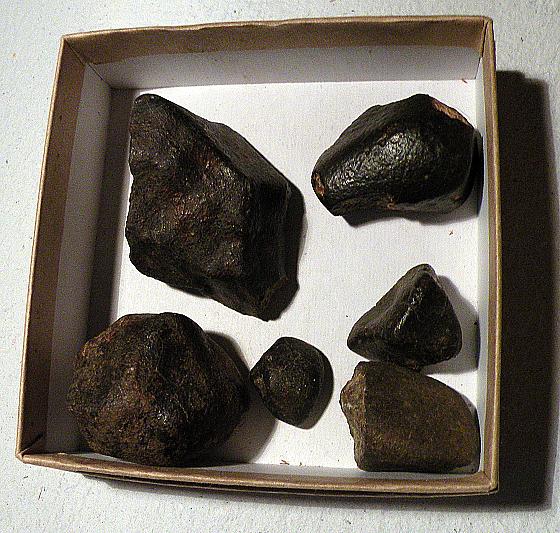 So here is the topic of my article this month. What makes a particular meteorite specimen worth the price that is asked? What factors make a collector decide what price they will pay?

My first thought is Name Recognition. There are some meteorites that I just want to have in my collection. They are historic falls from the very early years of meteorite study and they rarely come up for sell. Per gram price can fade into the background a little as we just suck it up and buy the price. So is an L6 from the 1700’s worth that much more than a fresh fall L6 from the last five years? Its all in the name. And with that goes the need to prove that it really is what its being sold as. Provenance, the history of the piece you are buying can add to the value. Getting all the old collection cards with the specimen when you buy it, is certainly very cool. The cards themselves are actually collected on their on right. 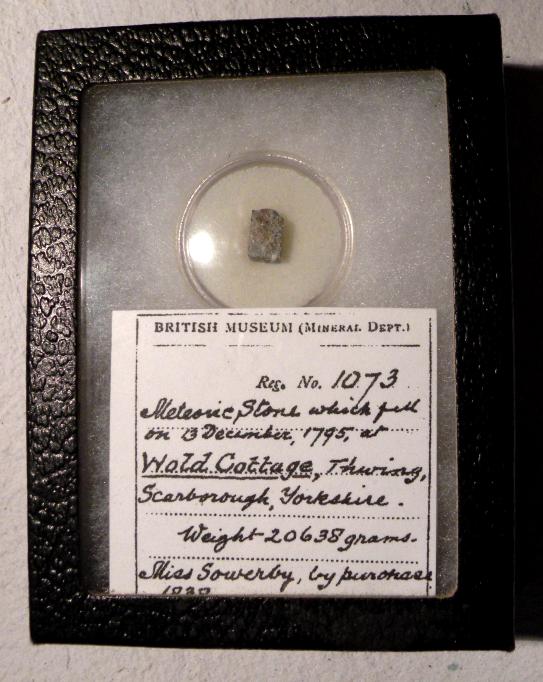 Wold Cottage slice with copy of British Museum specimen card. Note that the actual piece this was cut from and the  name of the person it was bought from are shown

Next thought that I have is Availability. What if there is only one stone which fell. And what if it was not very big. Lets suppose that it too is just a “common” classification. Why do we think that it is necessarily much more valuable than a rarer more interesting type. I think it is partly conditioning. In every thing that is collected there is the assumption made that the more layers of rarity something has the more valuable it will be. So something like 1909 VDB pennies are valuable not just that they are old, but they are scarce, and a fine grade is even more valuable because it is even rarer. In meteorites we have multiple layers of value too it seems. A summary might read this way. One small stone, fell long ago. It has all be in a private collection for decades. Nobody has ever had any except the original couple pieces that went to museums. Now a slice has been cut from the main mass. It has been made into an unknown number of smaller part slices. How much can the owner offer a meteorite like this for to the collectors of the world?

The Circumstances of Arrival. Here we have many factors that seem to play into the eventual cost of a specimen. Was it seen and found right away? Some people only collect falls. Some only historical falls from the long past. Who found it? There are important names in the world of meteorites and owning specimens once touched by these individuals has motivated interested collectors to pay much higher prices then for run of the mill pieces of the same meteorite. I have seen space potato blobs of Canyon Diablo go for more then beautifully sculptured pieces. Why? Just because they were found or owned by a certain person. I am a sucker for these and might buy them myself if I had the money. Who can understand the forces at work in this. What if a meteorite hits a car, or a mail box, or a house, or a cow? Is it really much more valuable? Or it the cultural, psychological, statistical factors we place on it that raises the cost?. And is it OK? Is that part of the fun of collecting? To let the meteorites get under your skin so much that such factors add value. I think so. I have meteorites that are special for crazy reasons. Maybe it is who I was with when I found it or bought it. I would never sell them under any circumstance. Maybe it is one I had to wait months to get. We do seem to add value to things based on many factors beyond just weight and type. Today, you have to add factors like it was caught on video tape flying through the air, or seen on radar, or sniffed out by a doggie. And the list of reasons for making them more valuable goes on and on.

The Actual Costs. After having discussed a little of the ethereal in the last section let’s get right down to the true economics that determine price. I guess that brings up an issue right off. Price does not really have anything but a remote relationship to value in meteorites. It does however establish the bottom line below which a finder is working in the negative. We are dealing with a hobby and an obsession sometimes and price and value separate under those circumstances. A finder may be willing to sell a stone for any amount since they are hunting for fun. But, there are real costs that are involved for the professional. They do effect the price and to some extent the value of meteorites. For dealers selling meteorites is a career and occupation. They are in it for the money they can make. Like most of us they need to pay their bills and feed their family from the money earned through their work. Selling meteorites is their work. I never haggle with dealers for pieces in my collection. I may try to get a better deal if it is something we are going to sell. That’s business. But, if they have to travel across the world and rent transportation and obtain guides, pay for lodging and food, in order to recover meteorites, all that expense only logically becomes incorporated into the price they must sell the meteorites for. So OK it is only an L6, but if you want it you have to pay the price. What if it is a Ureilite and it was tracked from space to the ground. And it fell far away on the other side of the world. You’re gonna have to pay. But, you can massage away some of the pain of the price with all the cultural and psychological stuff.

For example, you can say to yourself.

“It is the only time that an asteroid was found in space and its trajectory to the ground was predicted. It was seen by pilots of a passenger jetliner right when it was supposed to be seen. And it turns out to be a fascinating type of meteorite and not much will ever be available to collectors. If I don’t buy it now my chance may pass or the price may be even higher later.”

That kind of internal talk can help but lets be honest “you want it, you know you want it. . .” (Apologies to Mel Brooks) I doubt that we will ever be able to really define the variables of meteorite pricing. There are too many factors and many are just plain too intangible. But, a bottom line can sort of be set for some.

Many times I just look at a specimen and say boy that is a nice shaped, mostly crusted stone and I would like to get it if I can. So I ask, “How much is this one.” I get an answer and make a decision. Sometimes its yes and sometimes its no. On other occasions I see a specimen on my want list and it is a whole new set of factors that determine the purchase.

Ain’t meteorites fun. I got to go to the garage and clean and cut a bunch today. I wonder what factors will weave together to determine the price they will sell for. One thing I know is that meteorite collecting will never again be as it was only a few years ago.

The Meteorite Exchange, Inc. was born in 1996 with meteorite.com and Meteorite Times Magazine in 2002. Still enthusiastic about meteorites and all things related to them, we hunt, collect, cut and prepare specimens. We travel to gem shows and enjoy meteorites as much now as in the beginning. Please feel free to share any comments you have on this or any of our other sites.
PrevEvidence of Life Found in Another Martian Meteorite!
Witnessed Fall: Vernon County, Wisconsin, USANext