As enstatite-rich meteorites, we (scientists) refer to meteorites from distinct clans, although they share some common characteristics.
Enstatite-rich meteorites include enstatite chondrites (EH and EL groups), enstatite achondrites, and some anomalous ungrouped chondrites and achondrites. Enstatite-rich meteorites are relatively rare, constituting ~ 1% of all meteorite collections. Enstatite chondrites form most of these percentages, as enstatite achondrites are around six times less numerous than enstatite chondrites.
The enstatite chondrite clan belongs to the undifferentiated meteorites (chondrites). It consists of two groups EH (high iron) and EL (low iron). The dividing into these groups was first dependent on the bulk chemical composition (from these times, we have the group names); afterward, it became more dependent on mineralogy, particularly on the chemical composition of (Mg,Mn,Fe)-monosulfides, etc. Like other chondrites, the enstatite chondrites have categories referred to as the petrologic types, representing the degree of thermal metamorphosis or aqueous alteration. The number from 1 to 7 assigns the petrologic type. The most pristine (unaltered) are the chondrites of the petrologic type “3”. The enstatite chondrites consist only of the petrologic types from 3 to 7 (no aqueous alteration hasn’t been known for them). Some enstatite chondrites are classified as anomalous as they don’t fit in any group or petrologic type. Only aubrites and ungrouped enstatite achondrites represent the clan of enstatite achondrites.
One of their shared common characteristics is their mineralogy. They consist of Mg-rich pyroxene: enstatite, which has given them the name. We believe that they formed under similar highly reducing conditions. Their mineralogy reflects these conditions. Due to the reducing conditions, they consist of some rare minerals with compositions that have not been discovered on Earth yet. These minerals include sulfides of lithophile elements (on Earth) such as calcium (oldhamite: CaS), magnesium (niningerite: MgS), etc. Reducing mineralogy is also reflected in the composition of other minerals: Si-bearing kamacite (iron metal), chromium- and titanium-bearing troilite (FeS), manganese-bearing daubréelite (FeCr2S4), etc.
Enstatite chondrites and achondrites are not objects of interest only for their unique mineralogy but also for their isotopic similarities to the Earth-Moon system. The isotopic similarities (notably primitive enstatite chondrites) make them the closest potential material available to study conditions and processes in the protoplanetary disk in the region of formation of the terrestrial planets.
Due to their all similarities, widespread discussion of their common origin has been going on for many years. Although some evidence supports this claim, scientists have tended to think they did not share a common parent body in recent years. It is unclear how many parent bodies existed only for enstatite chondrites. To summarize, we do not know much about these mysterious meteorites. What were the conditions of their parent bodies’ formation? How many parent bodies did they have?
Some of these questions may have answers hidden within the minerals’ chemical composition and their mutual relations.
During my Ph.D. research, I have the privilege to study various meteorites from the enstatite chondrite and aubrite groups. I would like to mention some of the most interesting ones. I had an opportunity to study well-known aubrites such as Mayo Belwa, classified as impact melt breccia, or Bustee, where some scarce minerals such as osbornite (TiN) and previously mentioned oldhamite occurred for the first time. In addition, I was able to study a very famous enstatite chondrite Yamato 691 (EH3) and anomalous enstatite chondrites Yamato 86004 (EH-impact melt) or Yamato 793225 (EH6-an).
Since I focus on mineralogy, I mostly use optical microscopy, scanning electron microscopy (SEM), electron probe microanalysis (EPMA), and Raman micro-spectroscopy in my study, which mainly focuses on mineral troilite (FeS) and its variability in chemical composition, focusing mainly on the variation of chromium and titanium concentrations. During the extensive search for troilites and measuring their chemical composition by EPMA, I found some exciting variability in chromium concentration within the individual grains of some enstatite chondrites. Such variability could indicate the unequilibrity of these troilites in contrast to the equilibrated composition of the silicates. Similarly, in addition to the chromium concentration variation, I found the titanium concentration variation in some studied aubrites. Considering that this could lead to additional information about the formation of the parent bodies of these mysterious meteorites, I decided to look into this issue closely. Is the variability of chromium and titanium concentrations an indicator of the troilite unequilibrity, or is the cause of these phenomena hidden somewhere else?
First, I decided to try more precise micro-scale observation, hoping to get some answers. Although the presence of unevenly distributed fine particles might be one of the possible answers, I was still pretty surprised when I saw the microscopic lamellas of other minerals, which were unobserved during the previous measurements, in troilite grains with a high concentration of chromium or titanium. I found less than micron-wide lamellas of mineral daubréelite as a cause of the high chromium concentration in some of the enstatite chondrites (Fig. 1) and aubrites (Fig. 2).

Similarly, I found sub-micron-sized inclusions of titanium-rich sulfide heideite in the grains with high titanium concentrations in aubrites (Fig. 2).

However, the elevated chromium concentration in some of the enstatite chondrites remained unexplained as I could not find any similar lamellas or inclusions. Could be the lamellas or inclusion even smaller? I needed to use an analytical technique with an even higher spatial resolution to resolve this. Transmission electron microscopy (TEM) allows observation at the nano-scale. Preparation of the samples for TEM is quite complex and time-consuming as they must be electron-transparent. Because I needed to sample the selected troilite grains, I required the technique that allowed me to choose the exact location for the TEM sample preparation. Therefore I used the focused ion beam (FIB) technique. So, I prepared a set of samples consisting not solely of troilites from enstatite chondrites with unexplained high concentrations of chromium but also of troilites with the daubréelite lamellas for comparison.
The observation by TEM gave some new exciting results. For example, in the cases of troilites with daubreelite lamellas observed by SEM, the daubreelite lamellas are also present at the nano-scale (Fig. 3).

In contrast, otherwise, no daubréelite lamellas are found. However, the amount of data that needs to be subsequently processed is enormous. Therefore only a sample from the meteorite Asuka 881314 has been processed. Thanks to electron diffraction patterns, I determined the mutual crystallographic orientation of troilite and daubréelite. I simulated the combined electron diffraction pattern in that mutual orientation to confirm it. This mutual orientation causes the perfect overlap of some diffraction. The exact crystal lattice parameters are required to gain such perfect overlaps. The crystal lattice parameters from electron diffraction correlate well with the simulated ones. To follow this study’s outcomes, I plan to investigate this mineral assemblage of troilite-daubréelite further. To investigate their possible conditions of origin, I intend to execute experiments to synthesize troilite and daubréelite analogs and examine the extent of FeS-CrS solid solution.
In conclusion, investigating minerals at their nano-scale can bring difficulties. Still, the outcomes can shed light on mineral assemblages and their texture formation. By studying such things, we can contribute to revealing the mysteries of the Universe’s creation.

Acknowledgment: This research was supported by the Charles University Grant Agency project No. 1090119 and the Institutional Research Plan No. RVO 67985831 of the Institute of Geology of the Czech Academy of Sciences, Prague. I thank Akira Yamaguchi (NIPR) for the sample loan. Also, great gratitude goes to Petr Harcuba for the preparation of lamellas and SEM observations and to Jozef Veselý for conducting the TEM study. And last but not least, the considerable gratitude belongs to the Brian Mason Travel Award sponsored by the International Meteorite Collectors Association for the 2022 85th Annual Meeting of the Meteoritical Society held in Glasgow, UK, because thanks to this award, I was able to attend this conference in person for the first time. 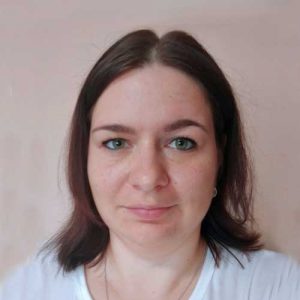 I am a Ph.D. student in mineralogy at the Institute of Geochemistry, Mineralogy, and Mineral Resources at the Charles University in Prague (Czech Republic). My research is focused on chromium- and titanium-rich troilites from enstatite-rich meteorites. As a person deeply in love with peculiar minerals, I was thrilled when I got the opportunity to study such rare minerals as those found in enstatite-rich meteorites. Studying meteorites is such as exciting research field by itself. The chance to contribute to the knowledge about the Universe even a little fills me with joy. Also, it comforts me when everything does not go according to plan during the research.
PrevNWA 11761 36.434 gram Mesosiderite
Junction City Georgia Fall : Technological And Social Aspects Of The HuntNext