Nakhon Pathom, Thailand Breccia like you give a Damn. 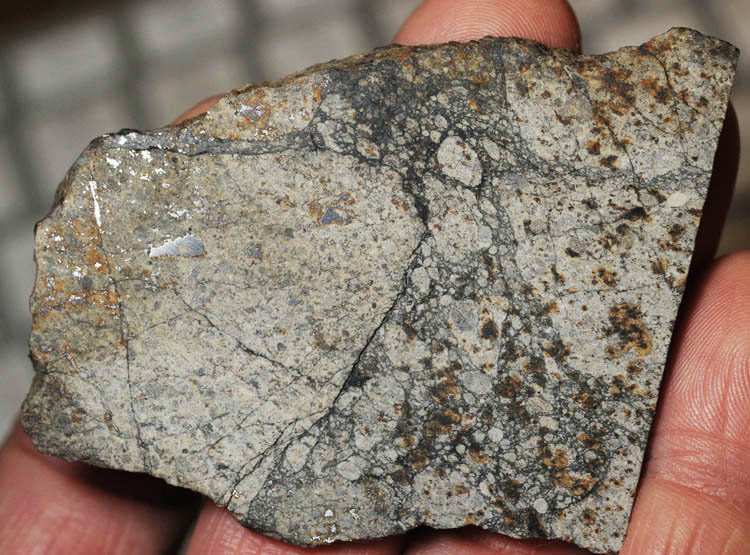 At 9:00 o’clock in the evening on the winter solstice of 1923, the earth welcomed the fifth and final witnessed meteorite fall for that year. Christened Nakhon Pathom, the meteorite fell about 10 km south-east of the Nakhon Pathom in the Don Yai Nom subdistrict of Thailand. The fall was collected quickly helping to preserve the specimen since the landing site was actually a swampy area.

Interestingly, the Nakhon Pathom meteorite was more than ten times larger than any other fall in 1923. And with a published total known weight of only 23.2* kg that says a lot. 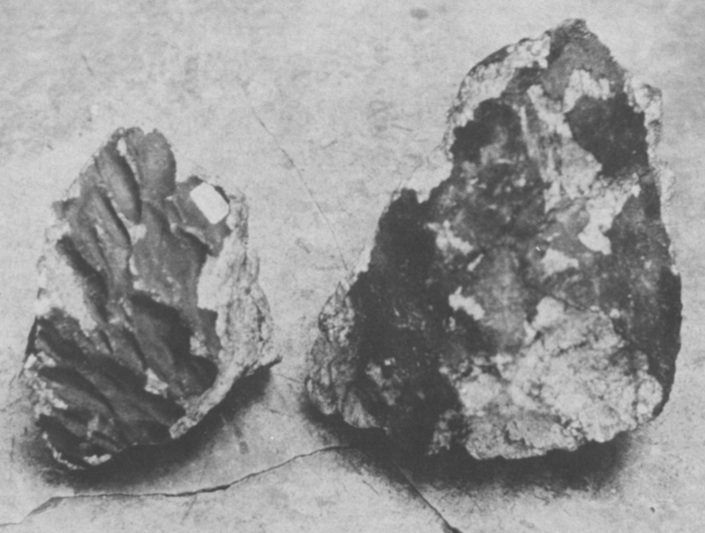 Shortly after the fall, the two pieces of the single individual were housed in a curio case in the National Museum of Bangkok because of their “unusual properties.” Thirty-seven years after Nakhon Pathom fell, while on a visit to the museum the well known Dr. D. P. Henderson and his wife saw the “curios” and rightly suspected that they were meteorites.

Henderson took a photo of the two stones in situ in the National Museum of Bangkok. In the picture above, according to the article, the smaller portion on the left at weighed 9.6 kg that time, and the larger piece weighed 22.6 kg. The smaller of the two pieces was loaned to the US National Museum.

*Interestingly, if one adds the listed weights for the two pictured fragments, the total is 32.2 kg. I suspect that a simple typo transposing the digits in 32 to make a 23 has seeped its way through the meteorite literature including the Catalogue of Meteorites. 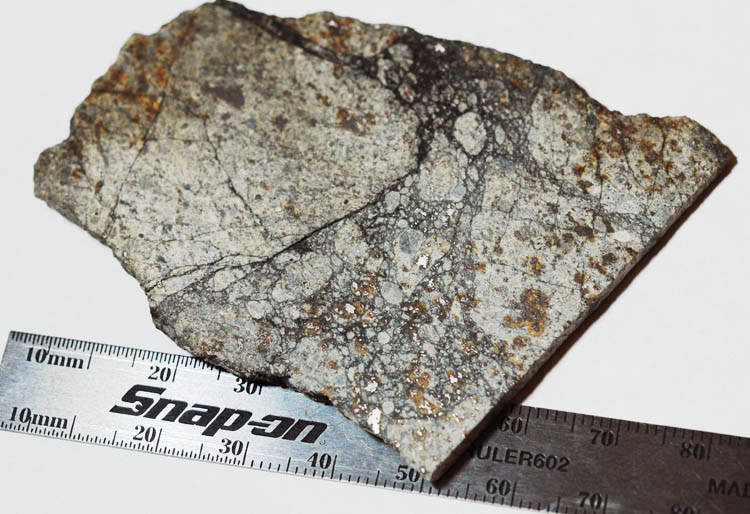 Today, according the Catalogue of Meteorites, the distribution of Nakhon Pathom material is as follows:

The main mass still resides in the Thailand

382 grams are in the Smithsonian Natural History Museum

130g are in the Natural History Museum in London

116g reside in the meteorite collection of Arizona State University

36g in the University of New Mexico collection

32g in the Max Planck Institute in Mainz, Germany

Nakhon Pathom is classified as a humble L6 chondrite, but it is hardly ordinary. The brecciation is stunning, and the sharpness of those lovely circles we covet is dramatic especially for a type 6. While most of the circular features are not chondrules, like a coin in the grass, our collecting senses have been finely tuned to appreciate the presence of round designs in meteorites. Nakhon Pathom merely capitalizes on this “chondrule mimicry” making Nakhon Pathom more desirable than its class in life intended. 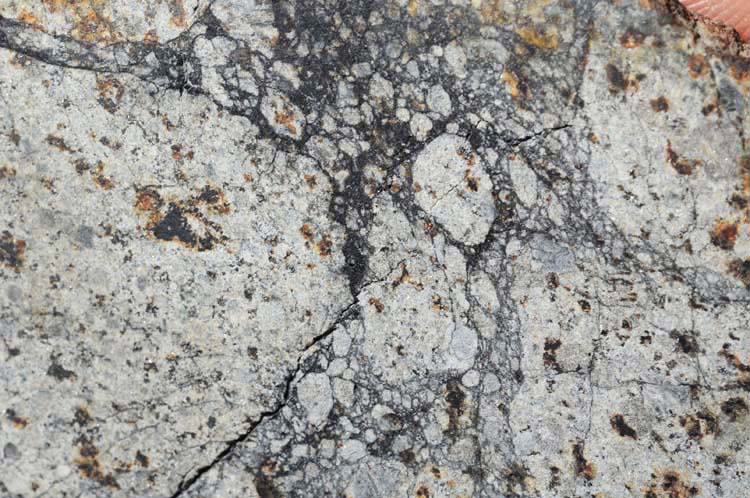 As the final Accretion Desk of 2009 rolls to a stop, I want to take a moment to thank all of my readers and wish you all well, and a happy holiday season as we journey together into yet another new year.

Dr. Martin Horejsi is a Professor of Instructional Technology and Science Education at The University of Montana, Missoula. A long-time meteorite collector and writer, before publishing his column "The Accretion Desk" in The Meteorite Times, he contributed often and wrote the column "From The Strewnfields" in Meteorite Magazine. Horejsi is also the Lead Technology Reviewer for The National Science Teaching Association, and just celebrated his 22th year working with NASA and the JPL in education and public outreach (EPO), and is a NASA Solar System Ambassador. Horejsi specializes in the collection and study of historic witnessed fall meteorites with the older, smaller, and rarer the better. Although his meteorite collection once numbered over a thousand pieces with near that many different locations, several large trades and sales and trades have streamlined the collection to about 250 important locations with all but 10 being witnessed falls. Many of the significant specimens in Horejsi's collection are historic witnessed falls that once occupied prominence in the meteorite collections of Robert A. Haag, James Schwade, and Michael Farmer. Other important specimens were acquired through institutional trades including those from The Smithsonian Institution, Arizona State University, and other universities. Horejsi was awarded the Harvey (Nininger) Award in Tucson in 2006, The Brotherhood of Guardians of the Ensisheim Meteorite in 2011, a JPL Inspiration Person, on the JPL STARDUST Team that was awarded the Smithsonian Air and Space Museum Annual Trophy in 2008, and former board member of the International Meteorite Collectors Association, and the Northwest Council for Computers in Education.
PrevTools and Techniques for Cutting and Finishing Meteorites
Interesting Odd Shaped Rizalites TektitesNext