I left you all hanging a couple issues ago regarding a meteorite I bought at the Tucson Gem and Mineral Show. Well, I am ready to tell all now that it is done being classified.

Yet for some reason I thought it could be something interesting if it was truly a meteorite. It was as you can see sort of bubbly on the outside and it had circles that looked just like bubbles with the tops broken away. Here are a couple pictures of the circle and cup formations. 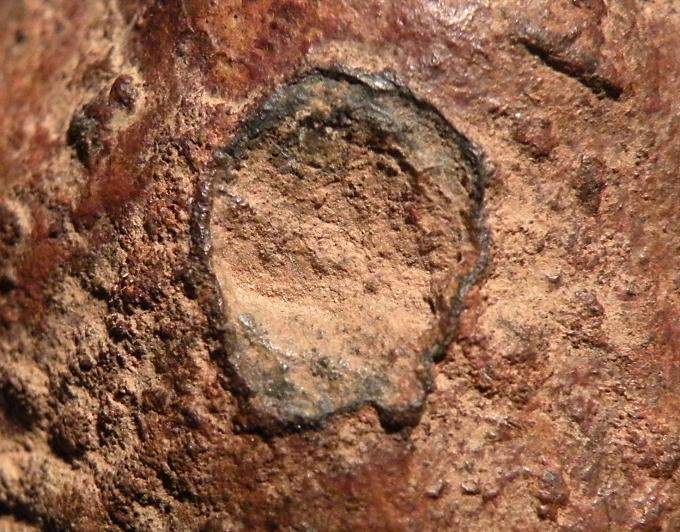 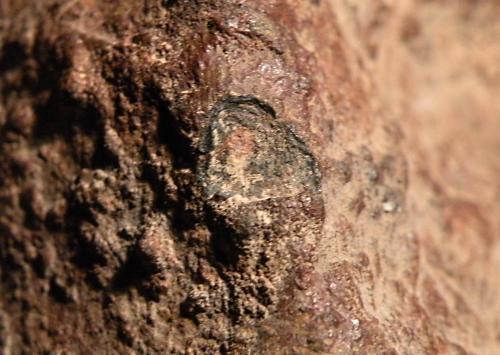 That question of whether or not it was a meteorite remained in my mind as it turned out for two days. I had intended to get a diamond file and grind a spot immediately to see what was inside. It would be a while before Paul and I made it finally to a place where I bought a $2 diamond file. That evening at the hotel room I checked the rock out. I started out a little worried as I ground into it. It was a flat dark gray color inside. I was thinking magnetite for a few seconds then I saw a tiny but unmistakable grain of metal and gave out a sigh of relief. It was undoubtedly a meteorite but it was weird.

I placed the 1,500 gram rock in my bag and could not wait to put it in the saw. That happened the following morning after getting home. As I said two months ago I cut off the end piece shown below and almost jumped out of my shoes. It was the most wonderful impact melt I had seen in a long while. Reminded me visually of a Cat Mountain picture I had seen. 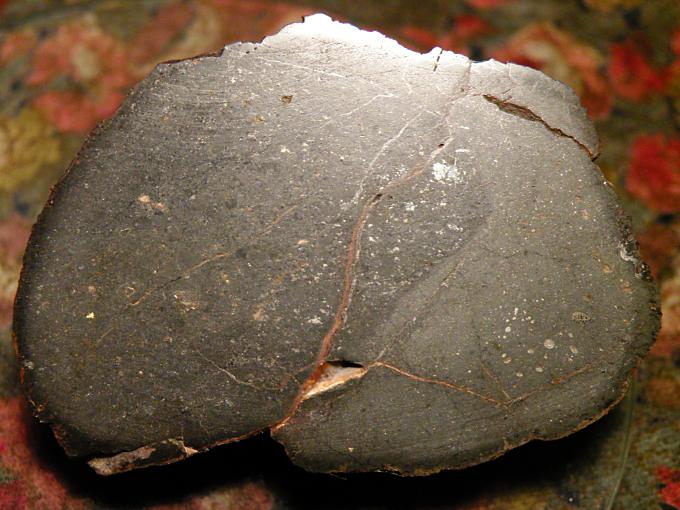 I lapped and polished the face of the end piece and hurried into the house. I needed to send this somewhere to get classified. That is not so easy a thing to do in the world today. All the researchers are very busy and backlogged. I took two digital pictures and attached them to an email. I sent it off to my first choice of lab. I was presumptuous enough to say in that email that it was an “impact melt unless I am mistaken”. I guess if I had not been so excited I would have been a little more reserved and let the expert tell me. Especially since I was asking for his help.

Dr. Rubin at UCLA has done characterization work on several meteorites for Paul and I over the last 10 years. And I was sure hoping he would be interested in doing this one. I was delighted when I got an answer from him that it was an “impact melted ordinary chondrite”. He wanted to get a normal type specimen size piece and a small piece of each of the two lithologies for making thin sections. So I was off to the saw again and I cut a thick slice off the end piece I had already prepared.

I had by pure accident picked a spot on the meteorite that had cracks. So wouldn’t you know, while I was lapping down the thick slice I was giving to UCLA it broke in half. Well, both pieces had both lithologies and both were over the size required for a type specimen so I sent both. Whichever piece was best for thin sections Dr. Rubin could choose.

I ran right out to FedEx and sent the pieces off. They weighed a total of 62.57 grams. I was still pretty excited about what a wonderful meteorite the mystery rock had turned out to be. I was seeing Paul the following day and took the stone and end piece for him to see. He had been through all the buying and grinding in the hotel room part it seemed only right to subject him to all my after cutting enthusiasm.

The following are the results that Dr. Rubin got characterizing the stone. Work for which I remain very grateful to him.

In the following pictures I will try to show some of the features mentioned in the above details. 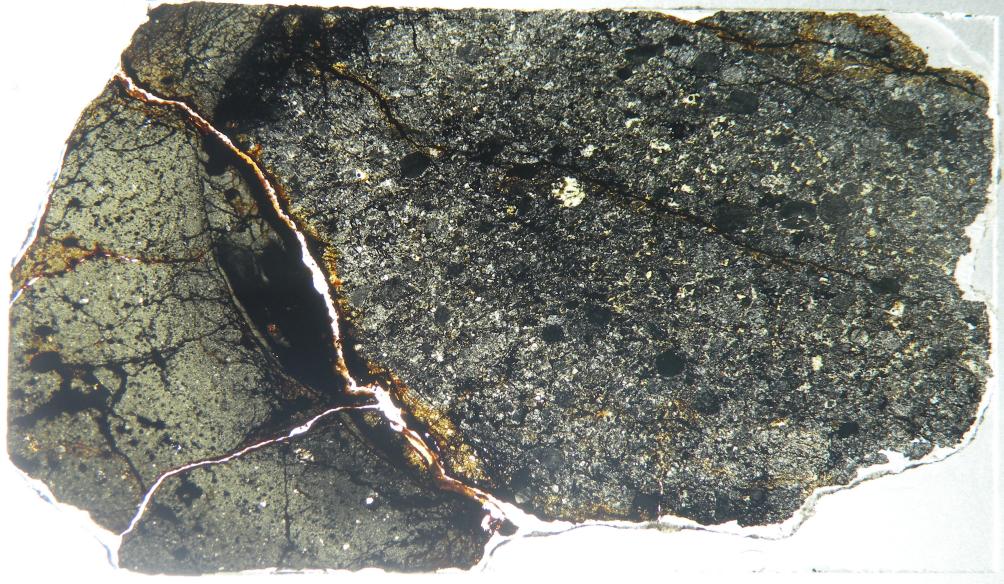 I could not help myself and made a thin section of the meteorite. It meant putting the endpiece back in the saw and cutting a slice or two. I had no prior experience with thin section preparation of an impact melt, but it went about like any other thin section. I suppose over the last 15 years I have made almost a hundred thin sections in the garage. I really wanted to be able to give you some pictures of how the meteorite looks on a microscopic level. It took a couple hours for me to make the thin section. It took a couple more to get some nice photos. As one would expect with a type 6 chondrite it will still have chondrules and they will be in poor condition. That was certainly seen here. Aggregations of mineral grains much of it olivine are scattered in areas that still appear as chondrules to the unaided eye. There were a few chondules that were in a little better shape with the grains of mineral still close together. But. all the chondrules are faded into the ground mass and rimless. Few of the individual crystal grains had distinct sharp edges. There was one very strange structure. I think that it is likely a ruptured chondrule as well. I will start with that picture. 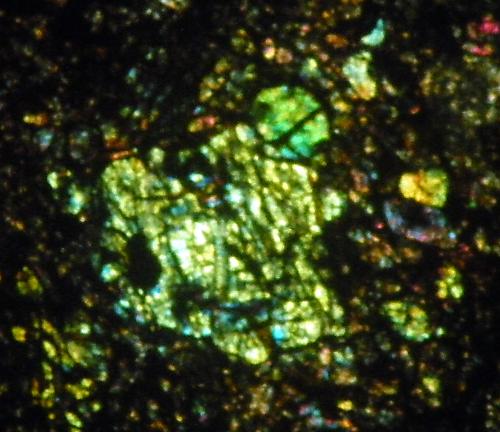 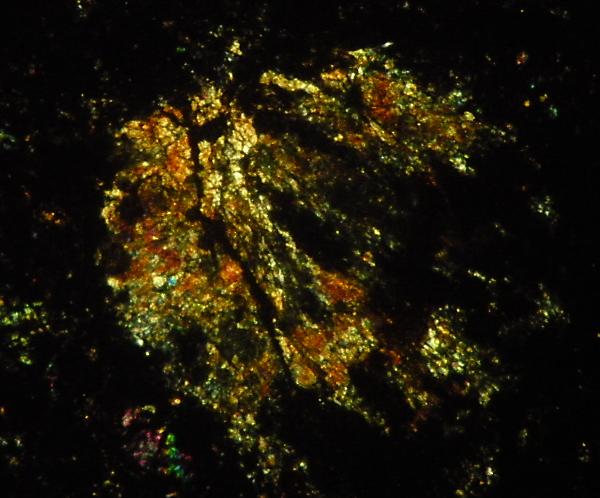 When viewing thin sections in cross polarized light it is important to always rotate the slide so that you not only see everything, but so that you can observe what is happening to the elements you are looking at. Some items may not show at all at a particular orientation of the slide. When rotated some will appear and others will disappear. This disappearance is called extinction. At a certain point in the rotation of the crystal grain it may have its transmitted light cut off by the filters. In fact the angles at which extinction occurs is a measurement taken by optical petrologist when examining rocks and their minerals. So here is another picture of the choundrule shown above but with a large portion not extinguished. I like the extra information seen in the larger first picture. Not only did individual grains appear but interference colors emerged in much of the portion that did not extinguish. 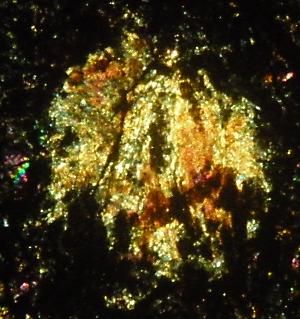 The following picture is of one of the wide aggregations of mostly olivine crystals. The center of the shot shows grains probably all from the same slightly dispersed chondrule. 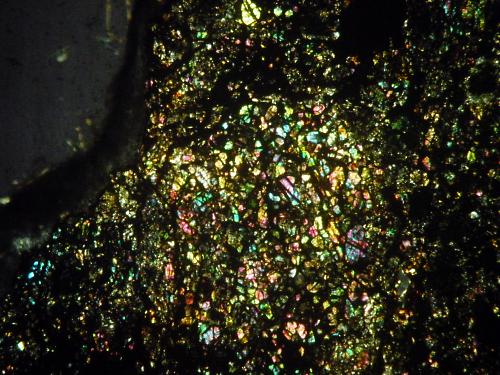 Here are a few more chondrules that I shot to give a further idea of how different they are from the beautiful sharply defined chondrules of a type three chondrite. For those of you who love crisp sharp chondrules. You will find little in the following pictures to make you happy. 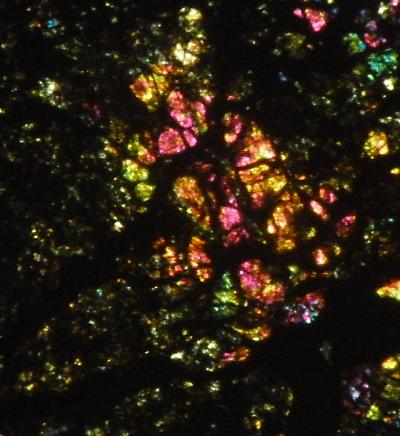 This was once a pretty barred chondrule I think, but not anymore. 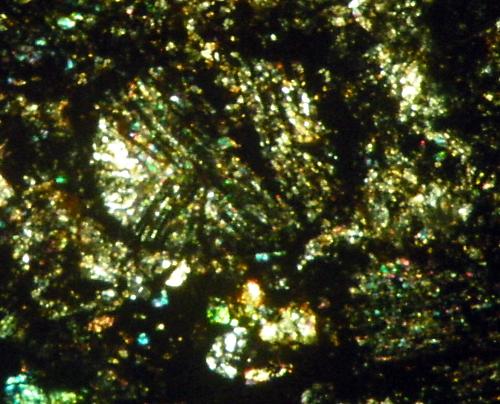 The next group of pictures show the range of interference colors that olivine often has in cross polarized light. In most cases it is of small masses of crystal grains or portions of disrupted chondrules. 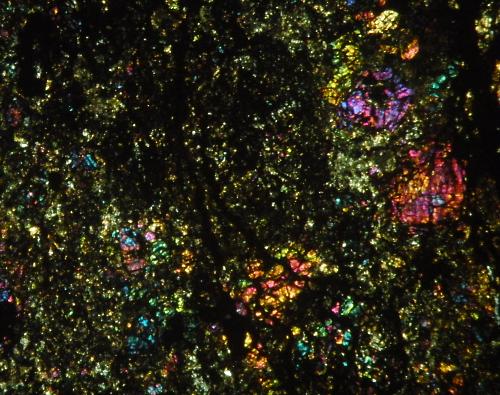 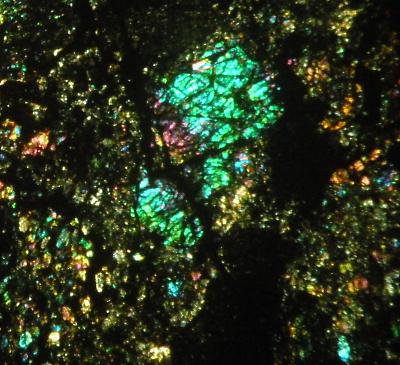 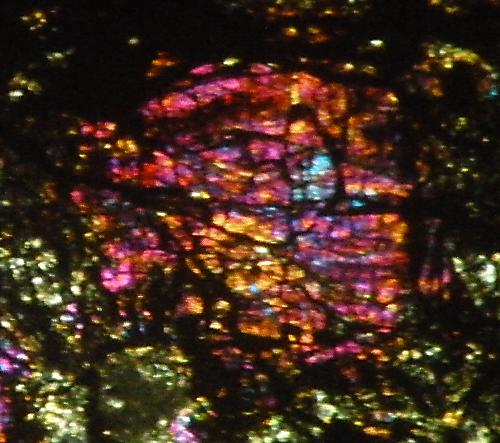 Here is a detail from the picture two above showing how damaged the crystals are in highly shocked meteorites. Though a portion of this meteorite was completely melted and has nothing showing in the thin section but a few widely scattered tiny crystal fragments, the chondrite portion has been pounded badly also. It is too bad that I am not set up to rotate the slide. I would love to check for undulatory extinction in some of these larger olivine masses. Maybe I will have to make a rotating stage for my microscope.

The meteorite has been submitted to the Nomenclature Committee and I expect that sometime in the future it will get an NWA number and be included in the official list of meteorites. This is especially exciting for me since this meteorite is unusual and of more interest to science then some others I have had characterized. It does make me wonder about what is hiding inside the other unclassified stones in my collection. Ones I have not cut. This one was just so darn strange and odd looking I had to see inside.

Until next month enjoy your meteorites, Jim

The Meteorite Exchange, Inc. was born in 1996 with meteorite.com and Meteorite Times Magazine in 2002. Still enthusiastic about meteorites and all things related to them, we hunt, collect, cut and prepare specimens. We travel to gem shows and enjoy meteorites as much now as in the beginning. Please feel free to share any comments you have on this or any of our other sites.
PrevIMCA Insights – April 2012
Lissa: Fell 110 years before Czechoslovakia, and 182 years before the Czech RepublicNext