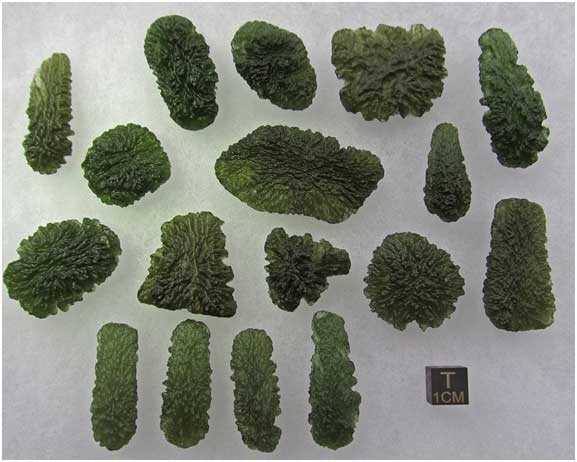 This year at the big Tucson show, one of the Czech moldavite suppliers had a frame of stunningly beautiful specimens recently recovered from the Ločenice area, a few kilometers northwest of Besednice (Southern Bohemia, Czech Republic). Ločenice is a long-known locality that has been revisited and systematically searched in the last year or two resulting in some of the finest specimens ever. The pieces are robust, richly colored, and the skin ornamentation is deep and glossy with a smoother character than the fragile, spiny, and somewhat frosted nature of Besednice. 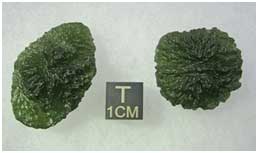 Some specimens exhibit unmistakeable Anda-like ornamentation with parallel grooving reminiscent of rodent chew-marks. The first beauty we sold is being set into fine jewelry, an application perfectly suited to the new Ločenice material! Diamonds, emeralds, rubies, and sapphires require a lot of modifications to bring out their glory. But these superb Ločenices are finished works of art. I am in awe.

Norm Lehrman is a recently retired exploration geologist with over 45 years experience. His career involved fieldwork in over 35 countries on every continent except Antarctica. While stationed in Australia, Norm and his wife, Cookie, became interested in collecting Australites, which ultimately led to a generalized passion for tektites, impactites, meteorites and related materials. In 1999 they founded the Tektite Source business (www.TektiteSource.com) which has evolved into one of the world's premier providers of tektite and impactite specimens. Norm has retired to a ranch near Spokane, Washington, where they continue to serve tektite aficionados worldwide.
PrevThe Atoka Meteorite
OvergrowthsNext