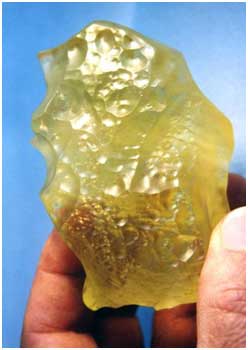 There is as yet no clear consensus regarding the detailed origins of Libyan Desert Glass. What we do know is that 28.5 million years ago in what is now Egypt’s Western Desert, in the southern part of the country near the Libyan border, there was a significant encounter with a cosmic visitor. No crater is yet confirmed, but it is believed that the land surface may have been over a thousand feet higher at that time. Libyan Desert Glass is a melt of nearly pure quartz grains that fused and flowed during some immensely hot thermal event. We know it involved a bolide that contained chondritic material because the dark brown-gray streaks and patches in some LDG have been shown to carry elemental signatures matching stony meteorites. This was dust from the demolished impactor that mixed into the viscous molten sand. Debate mostly centers on the nature of the event. Was it a direct crater-forming meteorite impact? Or was it a comet? Or a thermal airburst like Tunguska, maybe with no crater at all?

Whatever the case, most scholars agree that 28.5 million years ago there was a massive burst of thermal energy associated with a body from space that exploded in or above the surface of the earth in this area. The ground surface, which evidently consisted of very pure quartz sand with only traces of other weathering resistant minerals, fused to a considerable depth—at least a foot or more—into a straw yellow glass. Microscopic images show that every quartz grain collapsed into a long spindle shape, forming a mosaic of parallel eyes set in a braided matrix of viscously flow-banded ribbons. Tiny bubbles were stretched into elliptical planar shapes, sometimes yielding a silky chatoyance to the glass when viewed from certain angles. None of the glass has ever been found that shows definite flight-modifications as is characteristic of tektites and many impactites. It was a fused ground-surface crust of molten glass that slumped and flowed short distances.

It is found in a very large area, over 80 miles N-S and 30 miles E-W, but a central ring-shaped zone about 3 miles in diameter is reported to carry the highest concentrations, possibly reflecting the location of ground zero. If it is true that the original ground surface was a thousand feet higher at the moment of the event, then we are forced to suppose that as the underlying bedrock gradually eroded away, the LDG crust fragmented and deflated to its present location. Such processes would inevitably have dispersed the glass widely, so its present regional distribution does not demand any extraordinary sort of event.

There is a further story to the LDG jewels we now behold in wonder. The place where they are found is a region of linear sand dunes and wind-deflated desert pavement corridors. Constantly pelted (truly “sand-blasted”) with wind-driven sand grains, exposed parts of each piece have been fluted, shaped, and polished. Such stones are termed “ventifacts”, and each facet reveals a common direction for the prevailing winds. The frosted base that most specimens exhibit is the part that was buried and protected from erosion in the desert pavement.

The occurrence of LDG was mentioned as early as 1850 but the first significant investigations were not until the 1930s. This is a very remote and challenging setting hundreds of miles across the sand sea from the nearest roads. Even with today’s equipment, carrying sufficient fuel and water for the arduous trip is a challenge, entailing significant dangers. The nearby borders with Libya and Sudan add a measure of political/military risk. I have been told that it has been a recent requirement of the Egyptian government that expeditions finance a military escort. 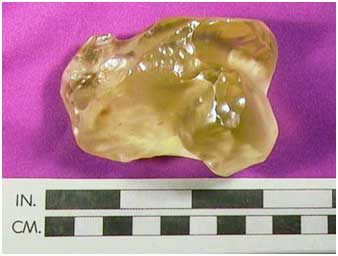 Our best specimen ever, a wonderfully sculpted and polished 168 gram iceberg of jelly-like clarity was recovered over 10 years ago during an expedition by Parisian mineral and meteorite dealer, Alain Carion. There have been a number of recent expeditions, mainly by Russian meteorite dealers, and there is at least one commercial photographic tour group that offers tours into the area. There have been recurring reports that the Egyptian government no longer allows LDG to be taken out of the country.

But this story of challenge and danger and overwhelming odds sets the stage for one of the greatest pieces of LDG trivia: The straw-yellow scarab in the center of King Tut’s pectoral is LDG! Somehow, someone gathered LDG in early Egyptian times, the days of the Pharaohs! Your mental pictures should involve camel caravans in the deepest desert.

But then, perhaps we shouldn’t be surprised. In the collecting area, Paleolithic artifacts are widespread, mainly consisting of simple blades of the sort that were set in rows into slotted sticks to form sickles for some of the earliest grain farmers, ancestors to a great many of the people now on earth. These artifacts tell a different story concerning this region: this land was not always a raging desert. In the long experience of the Desert Glass, rivers and lakes and tropical jungles passed over the land. It seems there was a time when fields of grain were growing there, and people were learning agriculture. But those days came to an end, and now the desert holds a firm grip.

Libyan Desert Glass posesses the highest silica content of any natural glass known. The fluted and polished forms often have a beautiful sculptural quality. The color, as seen by the human eye, varies with the spectral character of sunlight at various seasons and latitudes. In near equatorial regions, pieces take on a glow of neon-apple-green, while at higher and lower latitudes, the glass is typically perceived as pale straw-yellow. As natural works of art, LDG certainly ranks with the most beautiful of stones.

Norm Lehrman is a recently retired exploration geologist with over 45 years experience. His career involved fieldwork in over 35 countries on every continent except Antarctica. While stationed in Australia, Norm and his wife, Cookie, became interested in collecting Australites, which ultimately led to a generalized passion for tektites, impactites, meteorites and related materials. In 1999 they founded the Tektite Source business (www.TektiteSource.com) which has evolved into one of the world's premier providers of tektite and impactite specimens. Norm has retired to a ranch near Spokane, Washington, where they continue to serve tektite aficionados worldwide.
PrevSeymchan Meteorite – 355.9 Gram Transitional Part-Slice
Souslovo L4Next