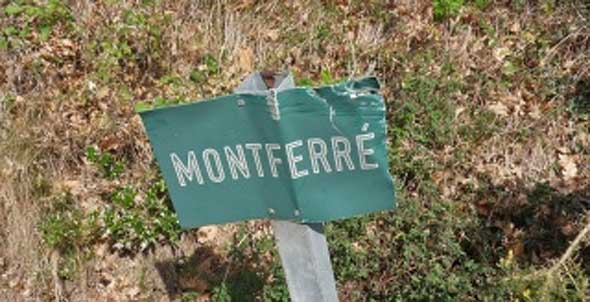 Late in the evening probably around 10pm, during the summer of 1923, the inhabitants of the village of Treville in southwest France between Toulouse and Carcassonne observed a large fireball crossing the sky. The bolide was lying from south to north and passed just east of the village. A loud whistle pierced the night as the bolide illuminated the sky. At the farm “Le Graulet”, Leon de Bataille then 16 years-old, was closing the windows when he heard that loud whistling and saw the fireball fall right behind a small hill only 400 meters from the farm.
During the following few days Leon de Bataille and some friends searched for the object fallen from the sky but without success.
About the same time just a little north of Treville, a farmer found that a few tree stumps in the middle of his vineyards had been burned. He figured it was simply the result of lightning but the event stayed in his memory.

Notes:
1) The burned tree stumps might be due to imagination.
2) All the witnesses and the documentation indicate the fall of one mass only with no explosion or fragmentation reported by anyone.

In 1966 after a regrouping of lands, Georges Krivobokow received a new parcel of land as a lease and his brother Michel went to work digging out tree stumps with his plow and then a stump bent the blade of the plow. He took it to the local blacksmith who straightened it and went back to work. Again a tree stump bent the blade; again he went to the blacksmith and again he went back to work, but when the blade was bent for the third time he decided to go work on a different field. All was going well for a while but then again something bent the blade. This time it had not been done by a tree stump but by a large stone. Since that stone was right in the middle of the field and very much in the way he asked his brother Georges to help him get it out. Neither one of them had ever since a stone like this one; it was rust-colored and covered with some kind of crust. They rolled that stone all the way to the southern edge of the field and since the village had just dug out a ditch along there, they just left it there. But Georges remembered the old story told by Leon de Bataille and immediately wondered if that was the result of the fireball that had illuminated the sky of Treville some 43 years earlier.

Michel then went to the owner of the field, Madame Gil, to tell her about the big stone that was much in the way on the edge of the field. Madame Gil refused to have it moved and Michel didn’t want to do it either so the stone stayed there for four years. But Georges was still intrigued and decided to get it out of there. He placed a cart in the ditch right below the stone and with the help of his brother they rolled the stone onto the cart and took it to the farm “La Gravette” where they were living at the time.

In 1971, geologists from the CEA (Atomic Agency) were prospecting in the area as part of a campaign to find sources of uranium; they happened to pass by the farm “La Gravette” and noticed the stone sitting by a barn. They immediately identified it as a meteorite, they broke a piece that they sent to the British Museum in London for analysis and the Museum confirmed that it was indeed a meteorite, an ordinary chondrite H5. Georges’s dream was confirmed, it really was a meteorite; the geologists allowed Georges to keep it at the farm but then he moved it inside on a base. Georges was fascinated by that stone, he built himself a nice library with many scientific books and it became a passion.
For years after this, Georges welcomed people from all over the area and whole school buses, happy to show them the meteorite and talk about the discovery.
NASA contacted him wanting to acquire it. Collectors made generous propositions but Georges preferred to keep his treasure fallen from the sky wanting only to share it with everyone, big and small. And scientists and enthusiastic amateurs from all over the world, Americans, Europeans, Japanese,…..kept on coming to the farm “La Gravette” to admire his meteorite.
Georges never married or had children; the meteorite was his unique passion and he found great joy in telling its story.

In the 1980s, the project of mining for uranium in the area seemed to be about to become a reality and then Treville would be surrounded by quarries. The mayor alerted the press and the television stations to tell them about all those grand projects; between the uranium and the meteorite, Treville and its inhabitants were suddenly in the spotlight.
But the years went on peacefully, Michel and Georges moved to another farm, “Plaisance”. Then, before moving to a retirement home, Georges offered his meteorite to his nephew also named Georges. And that is when trouble started………….

To better understand that trouble, it is important to make a few points perfectly clear:

At the time of the discovery, the field belonged to Madame Gil then to her daughter who married a Monsieur Gras; that couple was perfectly happy to see Georges (the uncle) enjoy his meteorite, they did not want it and they never wanted to cause any problems to anyone. Many years later their son Claude (Gras) decide that he wanted to sue the Krivobokows to get the meteorite back but his mother was firmly opposed to the idea. When his mother died, Claude Gras demanded that his father sue the Krivobokows to get the meteorite back but the father refused to go against the wishes of his deceased wife. Claude Gras had to wait until the death of his own father to start any legal proceedings. He then demanded that the inhabitants of the village sign documents stating that they had seen the meteorite in the farm “La Gravette”; he hired a private detective to carry his own investigation and a geologist to get GPS readings of the area then he gathered a mass of documents. It included a letter from the Museum of Natural History in Paris wanting to acquire it and forbidding its exportation.
The case between Claude Gras and Georges Krivobokow (the nephew) was heard in court several times after 2000, first in Carcassonne then Montpellier and finally in Paris. Claude Gras lost every single time, all the way to the highest Court of Appeals because of the “Loi du Trentenaire” that only gave him 30 years to make a claim; the meteorite was discovered in 1966, therefore it had become the official property of the discoverer, Michel Krivobokow, in 1996.

During my investigation, I learned that the meteorite has disappeared: not long before his death in 1999, Georges (the uncle) apparently went back to his nephew, retrieved the meteorite and hid it so well that to this day no one knows where it is.

I would like to thank the inhabitants of Treville who helped me reconstruct the history of this meteorite, Jean-Luc Billard for his active participation in this research and William Sanchez for his advices at the beginning of the research.