What better way to introduce the COMETS club, of which I am a member, than to use their own website: www.peaktopeak.com/comets

Our History …as briefly told by Fred Hall, a founding member…
“I met Anne Black and Mike Jensen at a restaurant for breakfast before I led a meteorite hunting trip to find some Johnstown meteorite. While seated in the restaurant, I mentioned that I was thinking of starting a meteorite club in Colorado. Mike and Anne looked at each other and Mike turned to me and said ‘We were thinking of doing the same!’ or something close to that. Mike started up the Yahoo site and we soon held our first meeting.” That was in 2000.

What do we do?
It’s all about meteorites. We collect them, look for them, read about them, dream about them… you name it, we do it. We try to meet once a month so we can swap stories, have a “show’n’tell” with the goodies that we have acquired (found or purchased), talk about what’s going on in the meteorite world and just have a good time with fellow meteorite enthusiasts and friends.

Two things immediately stand out, the focus of the club is Meteorites, and the members meet in restaurants, in fact it is quite often a Mexican restaurant with very good margaritas. And one thing the Club is not is stuffy, or even organized. As stated above the COMETS club was created in 2000 but we never got around to creating any rules, or regulations, there are no officers, and no dues. We usually meet once a month, if there are enough members in town and available, and then we just chat about our favorite subject. We have organized a few meteorite-hunts, very few, in fact. The one to Johnstown mentioned above did not result in any findings, but it did get us out of town and we explored the small town of Johnstown, the church, the cemetery right behind it where they were preparing for a funeral when the meteorite fell on the 6th of July 1924.

But all the members do rally and get to work once a year for the Denver Gem and Mineral Show, mid-September. Occasionally one of the members will set up a display case in the Main Show in the Merchandise Mart; in 2008, Fred Olsen did a great double case featuring the Meteorites of Colorado, a display that was very well received. Thank you, Fred! 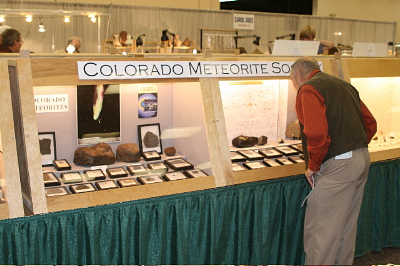 The main focus of the whole group is our Auction and Get-together. It used to be held on two consecutive evenings but was consolidated into one long evening a couple years ago and is traditionally held in the warehouse of “Mineral Boxes and Supplies”. Fred Olsen, the owner and our resident (retired) geologist, moves all his boxes a bit out of the way, we set up a buffet with barbecue beef, pork and all the trimmings, and of course a keg of beer and some wines. When everyone has had plenty of time to eat, drink, look at the pieces offered in the auction, and most of all chat, we open the Auction. Not a very big auction, nothing really high-priced, the goal is mostly to cover the expenses. 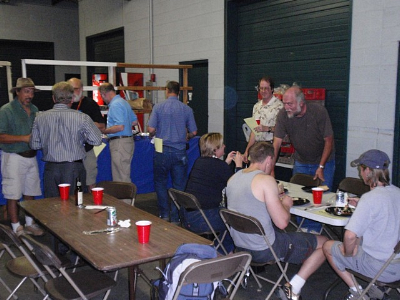 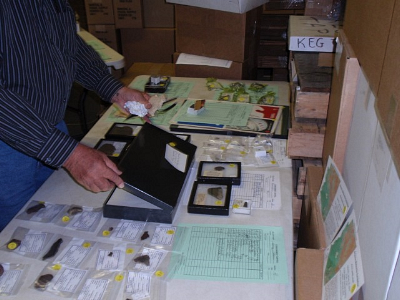 All ready for the Auction 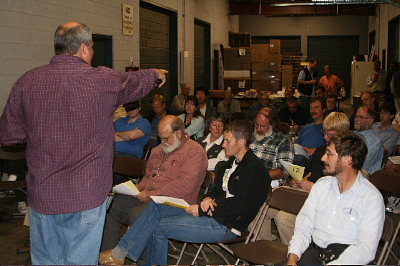 Mike Jensen is usually our Auctioneer

Another group effort has been the renovation of the meteorite display in the Geology Museum of the School of Mines in Golden, just west of Denver, with the approval of Dr. Geller, the very friendly curator of the Museum. We donated one display, and Dan Wray has been very busy renovating several others. And of course we all helped with labels and specimens. Now, we highly recommend the Museum to any meteorite enthusiast coming to Denver. 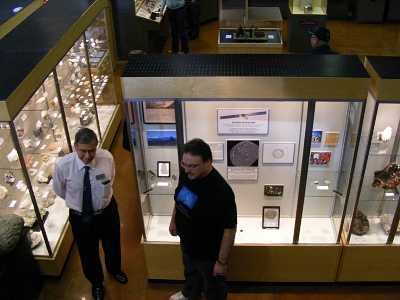 Dr. Geller (left) welcomes the COMETS members
during another of our regular visits 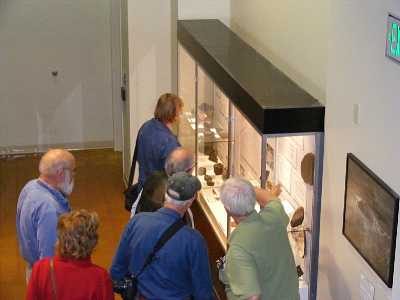 One of the 3 display cases housing the Meteorite Collection
of the School of Mines, and a few of the COMETS members

In conclusion, and because it is the season, we also have our own small Christmas party. For the last few years, it has been held in Roger’s large and pretty house. Thank you Roger! This year only a dozen members were in town, but size of the group is not everything. It is “pot luck” and this year the buffet was really international, from lasagna to an oriental salad and French wine. 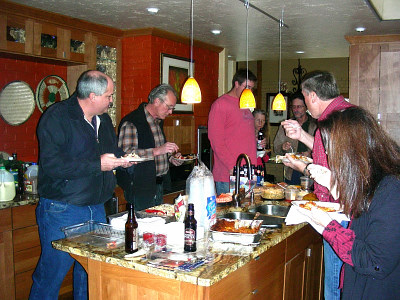 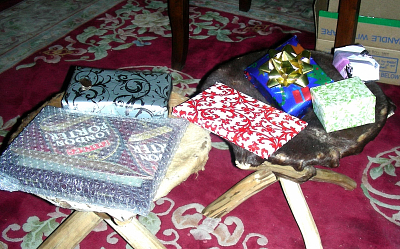 Of course no Christmas Party is complete without Christmas gifts

All the COMETS members wish you all,
wherever you are around the planet,
a joyous end to 2011 and a very happy New Year 2012.

This article has been edited by Norbert Classen