“I Just Know It Is A Meteorite”

For once I have used the springtime for Spring Cleaning. Over the last couple years I have been doing project after project non stop in the garage and it was really getting out of control. I had reduced my available work space down to the corner of one work table. So after two weeks of work and dozens of old busted cardboard boxes thrown out and replace with new boxes the garage is clean and vacuumed and ready to go for meteorite work and astrophotography tech prototyping. 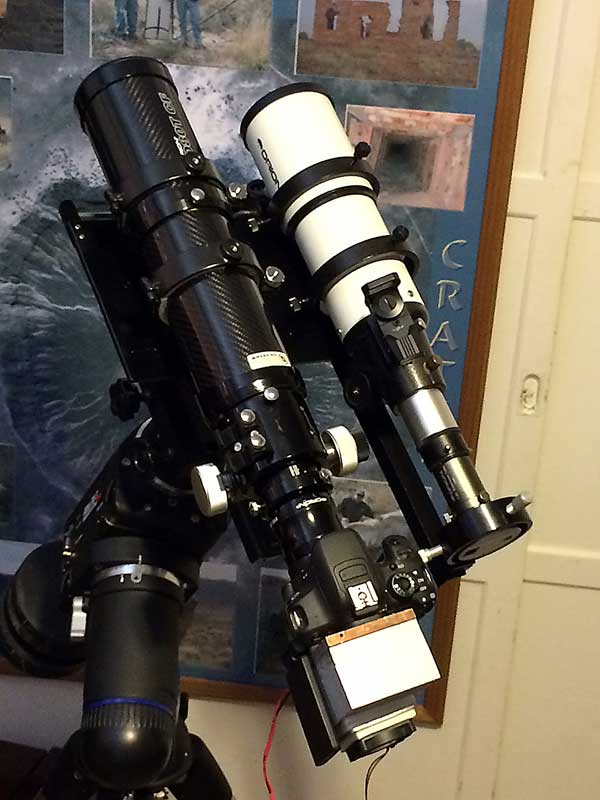 Paul and I usually get in our first big astrophotography trip in May but this year not until June. Before that trip I build all the electronic accessories and experiment on improvements to my telescope rigs. But about two days a week is still spent working on meteorites. I have a lot space for that again. I even have the scales out of the tiny corner I could barely get to. They are out where I can actually use them.

I weigh all the meteorites before I cut them just in case they turn out to be something that we decide to send off for classification. The total known weight is of course one of the questions that must be answered when the meteorite is submitted to the Nomenclature Committee to get its official name or designation. I am not going to find any Martian or Lunar meteorites in the boxes of unclassified material but it is surprising at how often I find something very interesting from the chondrite family.

I am so happy that I have a good working knowledge of what real meteorites look like. But even so I find a few stones that I am sure are meteorites but can not put into a group. So far they are a small pile of individual low weight stones. They all have something that identifies them as meteorites but they are weird.

So with all that said I guess it is time for my current irritation. My social media activity has been trimmed down to working on what Paul and I do ourselves along with Facebook and Google+. I have dropped out of sight on all the rest. It just takes too much time to look at that mass of stuff two or more times a day. So when my time looking at meteorite related social media is wasted with one non meteorite after another, and wild claim after wild claim of how wonderful a total fake stone is, I sometimes feel like cutting my friends list to just a few people and withdrawing from all the groups that are not regulated against such posts. I don’t have the time or desire to become one of the meteorite sheriffs. But I appreciate the individuals that attempt to point out the fakes being sold and promoted. Especially those who offer some insight and knowledge as they do their policing.

There have always been false meteorites around. Sometimes it was just a lack of knowledge by the seller. It used to be the seller’s belief in a story they had been told about how grandpa found the stone over the hill after seeing a bright meteor. But more often now the stones are pure attempts to cheat buyers who also don’t know what meteorites are really like.

I have not mentioned it in a long while. But a couple years ago I wrote a book for the business to sell on meteorite identification entitled “Meteorites – How To Recognize Visitors From Space”. It is an ebook. We were interested is giving hunters and collectors who were learning a tool with simple tests and lots of pictures that could be used to identify real meteorites.

The world of meteorites never ceases to provide a wild variety of views into the human psyche. There seems to be more individuals all the time that have no knowledge of real meteorites, but have found a new never before seen type. It is of course always priceless and made of something exotic. But these stones almost never have any characteristics of real meteorites. They never have fusion crusts and the thumbprints are just breaks on the surface. They are usually porous just full of bubbles, and they never have anything simple to identify like a chondrule or two. They are often made of something that science has never seen before. And here is the part that really gets me interested as an observer of human activities. The finders of these phenomenal rocks even after several labs have told them they are slag or basalt or rusted mill balls or something else earthly will reject those determinations and maintain their belief that they have found the secret
to the universe. Often clutching upon the notion there is a conspiracy to keep the information away from the public. They go on a crusade to find someone that will say they are meteorites. They generally move from meteorite labs to commercial material testing facilities that have never seen a meteorite. They find places with tools not designed for meteorites which are used in testing their rocks. Producing of course glorious results in rare elements, noble metals, new minerals and precious gemstones.

What are the results for us in the meteorite world that are interested in real meteorites? Well one of the results is less laboratories that will work on our genuine meteorites. Part of the process is to accept stones and sort the real meteorites from the non meteorites. It is a thankless job too; with thousands of regular earth rocks for every meteorite that is sent in. The sorting is important work and the individuals doing it know what meteorites look like. It is the arguments that come after the sorting from a few individuals which have been told they had slag or basalt or magnetite. The debates become discouraging to classifiers. I have seen several individuals and a few facilities stop taking specimens. Repeatedly the workers at the labs still accepting samples have told me they don’t have time or energy to argue with people they are basically doing a favor for.

We don’t send a lot of specimens off to be classified. But when I do want to send one off I find myself approaching scientists with sort of a hat-in-hand already apologetic attitude. I send a message to see if they are willing to classify one along with an image showing the type stone it is. I know that they are busy and have had a few irate people since my last request. It causes me to feel like I only want to send the meteorites that are super special for classification. This means that many other nice meteorites will never become classified. I have this feeling whether justified or not that I don’t want to use up what I feel are limited opportunities for lab time. I realize that some of this may be only real between my ears; that the reality is that I could actually get many more classified if I just sent them in. Especially now that some labs are happier to do classifications since they get paid a fee.

So I got this little pile of weird meteorites in the garage. I guess for the time being they will sit right where they are. But sometime I will get invited to an activity where someone I know from a lab will be in attendance. It is pretty out of character for me but I might just put a few of those stones into my pocket and take them with me for show and tell.

Every time I start a cut on a new stone I have a passing thought “maybe this will be something really cool and interesting.” Funny thing is that I like meteorites so much that no matter what the stone looks like after it is cut, it always seem to be really interesting. And they continue to be fascinating even without having gold and silver or kryptonite in them. So it is actually off to the garage to do some cutting as I finish typing this. Then maybe tonight it will be time for me to watch “Enemy from Space” a classic old sci-fi movie about meteorites that are filled with death for mankind. And meteorites don’t ever get any stranger than that.

The Meteorite Exchange, Inc. was born in 1996 with meteorite.com and Meteorite Times Magazine in 2002. Still enthusiastic about meteorites and all things related to them, we hunt, collect, cut and prepare specimens. We travel to gem shows and enjoy meteorites as much now as in the beginning. Please feel free to share any comments you have on this or any of our other sites.
PrevCrystalline Lunar Spherules
A Meteorite Field Trip To the Field MuseumNext