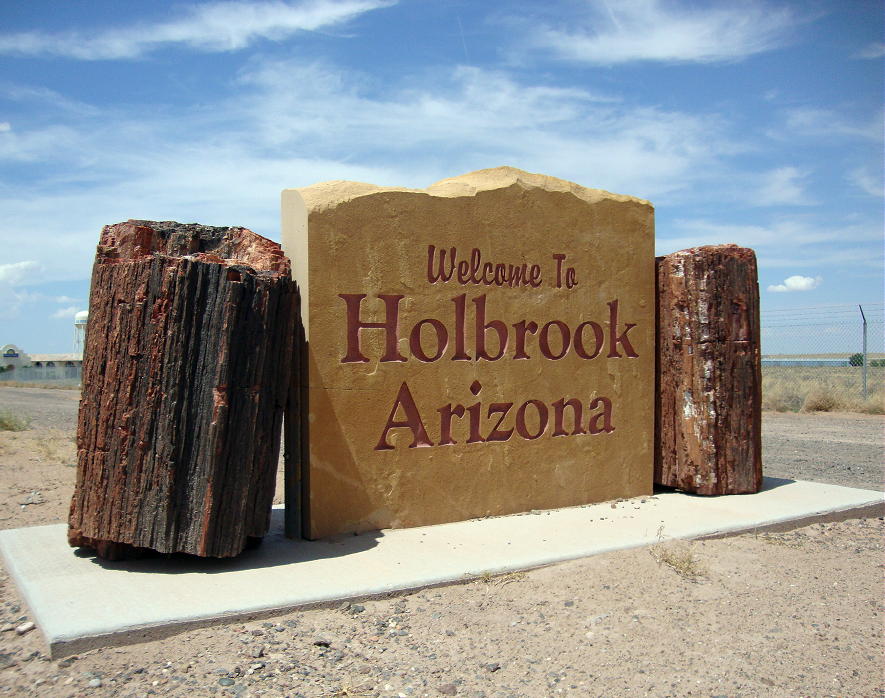 So, a big “THANK YOU” goes to Ruben Garcia (who is always the first person to volunteer to be host for any social gathering), for taking a casual comment about a “99 year anniversary” and to turn it into a fun, group meteorite hunt (not that Ruben needs an excuse to socialize). And the same “Thank you” goes to Jim & Wendy Wooddell for their logistical support and managing of the daily (and nightly) activities, which insured a successful social event.

And to all of those who have taken the time to share their images and videos of the Holbrook Hunt with us, a big “Thank you”, as well. I’m sure glad that Ben Fisler’s son, Erik, is such a good photographer, and that they took time from finding all of those meteorites in order to record this “event”. Because, I think they’ll be talking about this “group hunt” or many years from now.

Although this group hunt has been ably documented by many of those in attendance, I still wish I had taken more images while hunting in the strewnfield. Especially of people making their very first meteorite find, because this only happens once in each finders lifetime. And to be able to re-live this event (even vicariously) through its recording, would be reinvigorating to the soul of every meteorite hunter.

So, my article this month will be primarily a compilation of everyone’s images and reports. At least, all of those images and reports that I could find. Hopefully, this will serve as a convenient “Reference” in the future for those who will be making plans to attend the “100th Anniversary Holbrook Meteorite Hunt”. 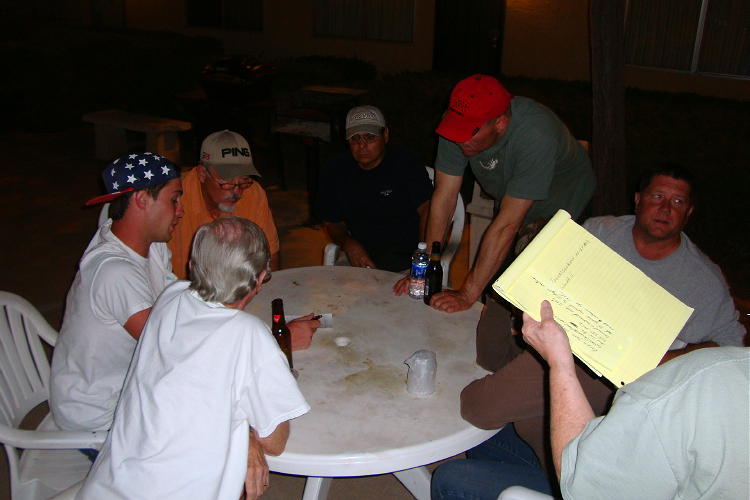 (L-toR) Erik Fisler, Troy Ball, Roy, Richard Garcia, Terry Scott, Jim Wooddell
But I did record the group activities the evening before and after the Saturday hunt. And that is what I would like to comment on here. Upon arriving at the Motel 6 on Friday evening and entering into the central courtyard, it was as if we had registered for a symposium, because we encountered several dozen people standing around in small circles engaged in animated discussions (talking about meteorite-recovery). All that was missing were the name-tags.

(L-to-R) Ruben Garcia, Michael Mulgrew, Xu Zhang, Rob Crane, Terry Scott, Bob Verish, Erik Fisler, Nick Gessler
A good percentage of these people had never found a meteorite, and a few had never gone on a meteorite hunt before coming to Holbrook. Some of these neophytes had brought rocks they had found with the hope that one of the more experienced hunters would deem their “hopeful” as being a meteorite. All of the others were intently listening, trying to learn why these meteor-wrongs were not meteorites. The crowd around Ruben Garcia was particularly large. It seemed like the meteor-wrong discussions were going to last all night. 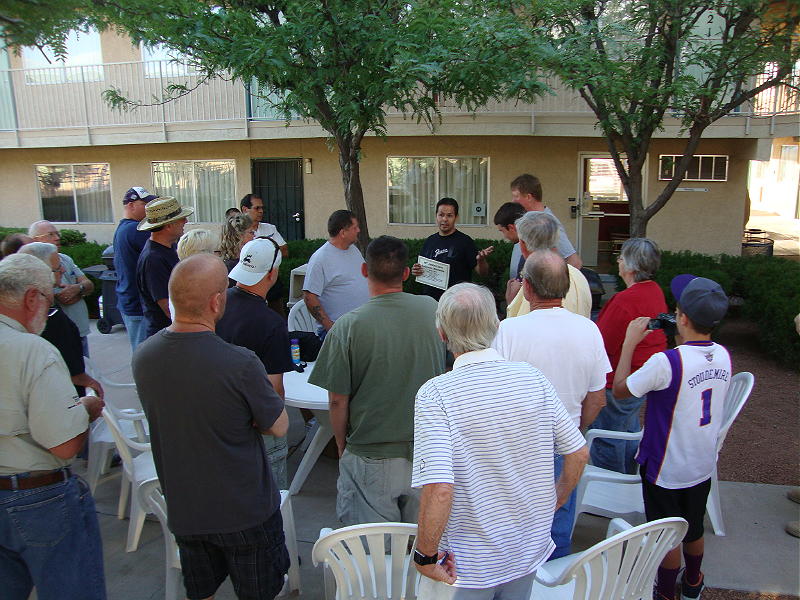 In an effort to answer everyone’s questions, Ruben brought out his collection of Holbrook stones and conducted an impromptu free-clinic on “Meteorite Identification”. I feel that Ruben’s extra effort in educating, by conducting this class on meteorite ID, was a factor in the overall success of the hunt the next day. After Ruben’s free-seminar, conversations over dinner would be centered on meteorites. After dinner, small groups would form to continue discussing various meteorite-related subjects long into the night.

Standing: Jim Wooddell, Richard Garcia, Ruben Garcia, Erik Fisler, Mark Bowling, Michael Mulgrew
Then the next evening, even after a whole day of meteorite-hunting, everyone pitched-in to make the awards ceremony as memorable as making your first find. Jim and Wendy found the time to make Certificates of Achievement for all 47 participants, as well as, the trophy awards, not the least of which was the award bestowed upon Ruben for his unique social skills which made possible this anniversary as a historical day in meteorite-recovery. 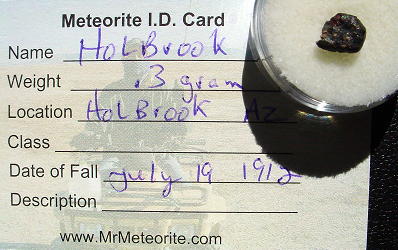 The specimen that Ruben Garcia presented to Moni Waiblinger
After Ruben accepted his award, he and Erik personally awarded each meteorite hunter with their Certificate, and in addition, if that person hadn’t made a find that day, they were given an original Ruben Garcia genuine Holbrook meteorite along with limited-edition Mr.Meteorite ID Card & CoA (which were much larger than any of the fragments that I found)!! By my count, there were 19 people who were presented with a Holbrook meteorite gratis-free by Ruben!

As I mentioned earlier, I have some images of the Holbrook mini-meteorites that I found. I’ve uploaded those and I’ve made them available on-line on my “Image Gallery of microscopic Holbrook Meteorites”. Just wanted to comment here on some of the other activities that centered on the “99th Year Anniversary” Holbrook Meteorite Hunt. 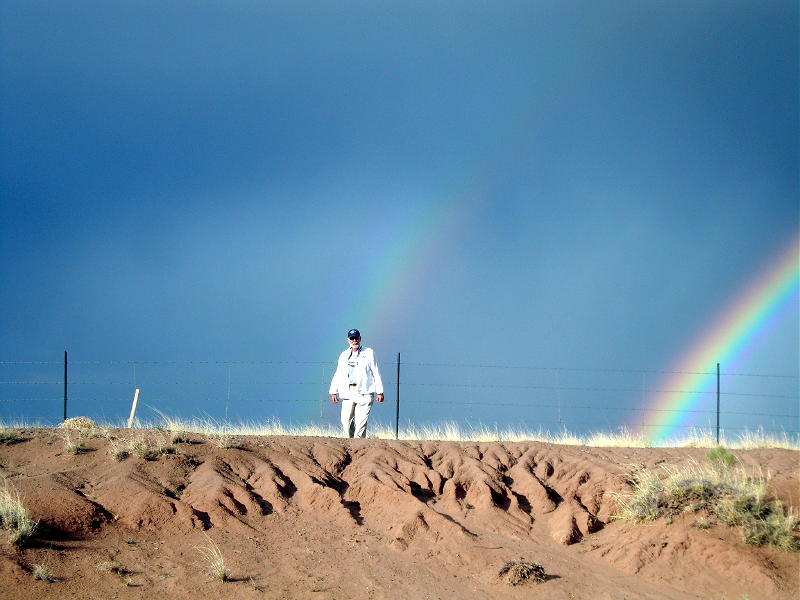 I am looking forward to next year, and to the “100th Anniversary Holbrook Meteorite Hunt”.

The Wikipedia: entry for Holbrook
– contains links to the Holbrook Meteorite.
http://en.wikipedia.org/wiki/Holbrook,_Arizona

Ruben Garcia – post in Club Space Rock:
where he first proposed the idea of a “group hunt” to be held on the anniversary of the Holbrook fall,
with MANY comments:
Holbrook 99th anniversary Meteorite Hunt
Posted by MrMeteorite.com
on May 27, 2011 at 11:36AM in “Meteorite Hunting”
http://meteorites.ning.com/forum/topi cs/holbrook-99th-anniversary

The following “References” are links to postssent to the Meteorite-List soon after the “99th Year Anniversary – Holbrook Meteorite Hunt”:

The following “References” are links to images and videostaken by individuals who attended, or actually hunted on July 16th, at the “99th Year Anniversary – Holbrook Meteorite Hunt”:

Michael Mulgrew: his first post, including
a link to an image of his “first ever” meteorite find (made during the Holbrook Hunt)
in his reply to Ruben’s 2nd post, titled:
[Meteorite-List] 99th year Anniversary Holbrook Hunt – A Huge Success!
http://six.pairlist.net/pipermail/meteorit e-list/2011-July/078368.html

Jim Wooddell: his next post, which includes
a link to his website’s “Scrapbook” with his images taken during the Holbrook Hunt
in his reply to Ruben’s 2nd post, titled:

[Meteorite-List] 99th year Anniversary Holbrook Hunt – A Huge Success!
by Jim Wooddell
Mon Jul 18 12:55:56 EDT 2011
——————–
Hello everyone, once again!
I apologize, if I am bugging anyone! I just posted Wendy’s and my
Holbrook Hunt finds in my scrapbook. Note the little steel-blue Iron
meteorite I found. I had several field comments on this one…like “WOW!”
Check it out.
I also posted the only field picture I took that day (shame on me) of
Richard’s Garcia’s 47 grammer! What an awesome stone and my new phone
takes fair pictures!
Hope you enjoy..
http://desertsunburn.no-ip.org/ScrapBook/07162011/inde x.html
Jim Wooddell
———————
http://six.pairlist.net/pipermail/meteorit e-list/2011-July/078378.html

Michael Mulgrew:
– included a link to a great gallery of IMAGES (as part of his Holbrook Hunt “trip-report”),
in his reply to Erik Fisler’s post, titled:
[Meteorite-List] Photos of Holbrook Anniversary Hunt & Finds
by Michael Mulgrew
Wed Jul 20 01:42:08 EDT 2011
List,
Please allow me to share my pictures from the weekend’s hunt:
http://www.mikestang.com/holbrook2011.htm
-Michael in so. Cal.
http://six.pairlist.net/pipermail/meteorit e-list/2011-July/078449.html

Nick Gessler:
– included a link to his recently updated Holbrook webpage
which have excellent images of his microscopic finds from the 2011 July 16th Hunt
in his post to the Met-List, which started an interesting thread, titled:

Abe Enochs:
– was at Holbrooks with his son and filmed this VIDEO
[can’t find his post to the Met-List], although it is listed with other videos HERE!
But his video is titled:
[Holbrook – 99th Anniversary Meteorite Hunt ] on YouTube!
http://www.youtube.com/watch?v=X hpf63iAOhs&feature=youtu.be

To go back to the top of this page, click on the word “REFERENCES:” for the list of links pertaining to the 99th Anniversary Holbrook Hunt. My previous articles can be found *HERE*

Bob is a retired aerospace engineer living in Southern California, and has been recovering meteorites from the Southwest U.S. Deserts since 1995.
PrevIMCA Insights – August 2011
Tektite Testing RevisitedNext