Images from the gathering of meteorite hunters celebrating
the 100th Anniversary of the Holbrook Meteorite fall.

Sixteen (16) meteorite hunters showed-up in the Holbrook strewn-field at the very moment – when the fall had occurred – exactly 100 years later.

Even though the 100th Anniversary day, July 19th 2012, came on a Thursday this year, there was still a good turn-out of meteorite-hunters for a middle of the week Group Hunt. This Holbrook 100th (Anniversary) Hunt was going to be a three-day event that would carry-over into the weekend, and indeed, more people did show-up on Friday night and Saturday, but the attraction of finding a Holbrook meteorite on this day, the 100th Anniversary of this classic Arizona fall, is what made for this good Thursday turn-out. 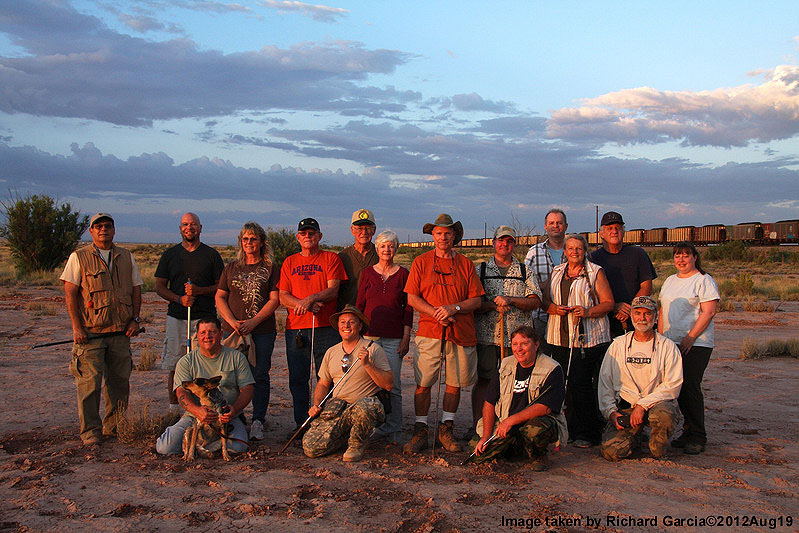 http://www.mail-archive.com/meteorite-list@meteoritecentral.com/msg105275.html On Thursday, didn’t arrive at Holbrook until late afternoon. Checked-in at the Motel 6 before heading-out to the strewn-field. While checking-in we met a lot of people that had been hunting that day and were now taking a break from the heat before going back out to the field. The good news was that most everybody had already made a couple finds. Dropped-off my bags in my room, put on my hiking boots, and grabbed my water bottles even though the sun was setting. Storm clouds started to form out on the horizon, but they never threatened, yet they gave some hope for shade. It seemed that everyone was heading back out to the strewn-field at the same time.

In the last few remaining hours of daylight, I managed to find two small, sub-gram Holbrook individuals. As the sun touched the horizon, we all knew that it was time to take the group picture. Setting-up all of the cameras made for a very curious scene. Synchronizing all of the time-delayed cameras and having all of the cameramen run back (at the same time) to get into the picture was humorous and made it easy for everyone to be smiling. This feat required a couple repeat takes. But the exact moment finally came, and on this take, everything “clicked” – the clouds parted, the setting sun came out, the train came by, and a hundred years came and went since first the Holbrook Meteorite fell.

Eventually it became too dark to search the strewn-field any longer and we all met-up back in town. Unlike last year, where there would be a speaker leading various group-activities in the central courtyard of the Motel 6 each evening, this year everyone would just show-up with food and drinks, and we just partied. Of course, most of the conversations were about meteorite-hunting. And although there was no one expert leading a classroom-like discussion, there was still a lot of expertise that was shared between the more-successful Holbrook-hunters and the less-experienced students. Several people remarked that these conversations made a marked improvement in their meteorite-recovery over the course of the weekend.

Above are the 9 Holbrook finds that the Wooddell’s made on Thursday, the 100th Anniversary date (2012-07-19).
(Image courtesy of Jim Wooddell©2012.)
A lot of people told me that, if I go to Holbrook this year, not to expect to find very many meteorites, especially not after the highly successful group hunt at the “99th Anniversary” gathering where over 100 people found 93 fragments of the Holbrook fall. I may have even bought into that kind of thinking, because I remember saying, “Yeah, maybe. But I’m going anyway just to socialize.” Which ended-up being true, because even if I hadn’t found any meteorites, I can honestly say that I still would have had a great time meeting and hunting with everyone, and then at night just hanging-out with everyone at dinner and at the motel, and just talking “meteorites” all night. As it turned-out, the Holbrook finds were the “icing” to the literal icing of Twink’s delicious Holbrook Cake, which we all shared. 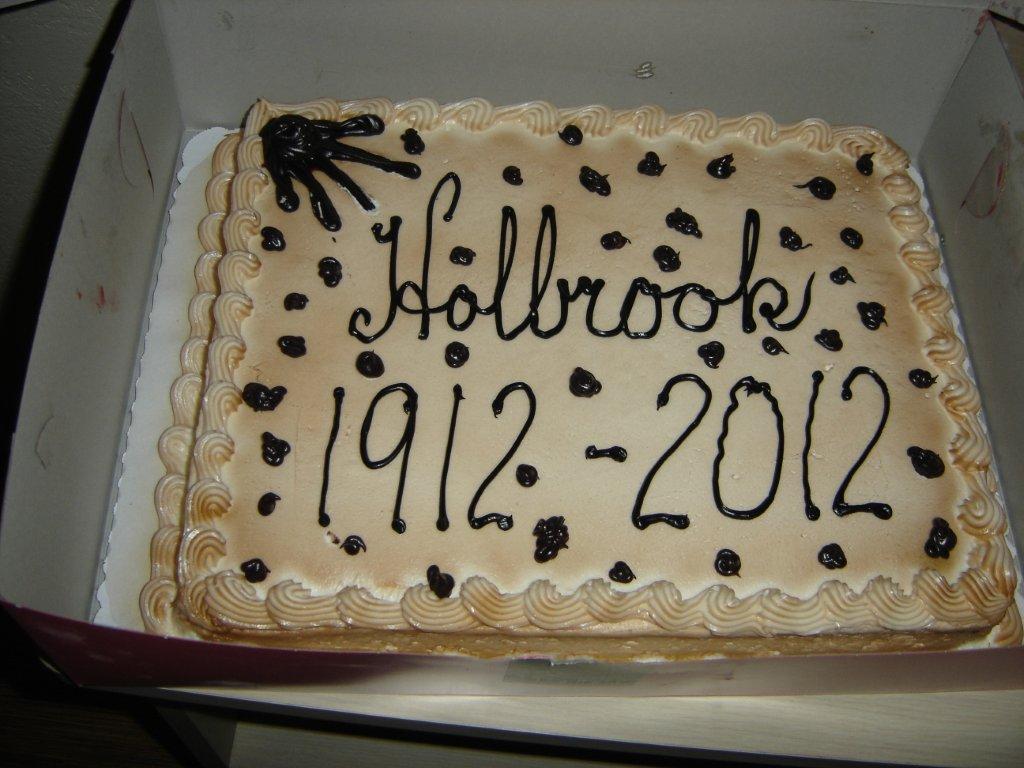 Twink Monrad (famous for her “Gold Basin Cakes”) baked a big Holbrook cake.
It was really big, so there was plenty for everyone.
(Image courtesy of Twink Monrad©2012.)
That’s not to say that my scientific-curiosity wasn’t piqued as to whether or not the surface of the Holbrook strewn-field could “bounce-back” and offer-up more Holbrook stones in time for the 100th Anniversary gathering. This was of enough interest to me that I wanted to be there and witness first-hand the out-come of this group hunt. (As it turns-out, the Fislers have done a good job of documenting their return visits to Holbrook which shows that this “bounce-back” interval of time is probably much shorter than would be expected.)

The “South-side” (a view to the south from the train tracks).
(Image courtesy of Mike Mulgrew©2012.)

Compared to last year, there were fewer people hunting the strewn-field (based on a per-day total) this anniversary. And there were fewer first-time hunters this year. Although there were fewer people making their “first-time finds” this year, there were a total of 93 Holbrook meteorite finds reported this weekend, which is remarkable, since that was the exact same number that was reported last Anniversary! And although the total reported weight for the weekend was half of what was reported last year, it must be kept in mind that there was one monster stone found during last years Anniversary Hunt that weighed 240grams, and if you subtract that from last years total, the two Anniversary totals are remarkably comparable. So if anything, this shows that the group this year was more productive than the group last year.

Want to see more “numbers”? On the DesertSunBurn YahooGroup website, there is a compilation of these finds listed in a file titled, “Holbrook 2012 REVISION 4.xls“.
So, in a nutshell, here are the totals:
At least 22 meteorite-hunters found 93 meteorites (not aware of any first-ever finds) over a 3-day period (July 19-21, 2012) totaling over 200grams.

I had more images that I took of the Holbrook 100th Hunt, but I lost those that were in one of my field cameras that just simply died. So, I want to say “Thank you!” to all of you who gave me permission to use your photos.
To wrap-up my report I would like to end with a Photo Gallery of in-situ images of my finds: 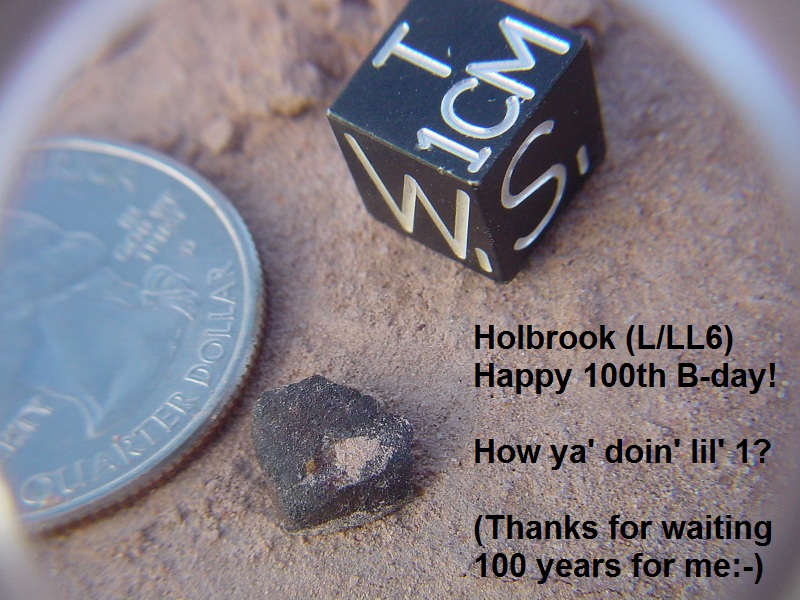 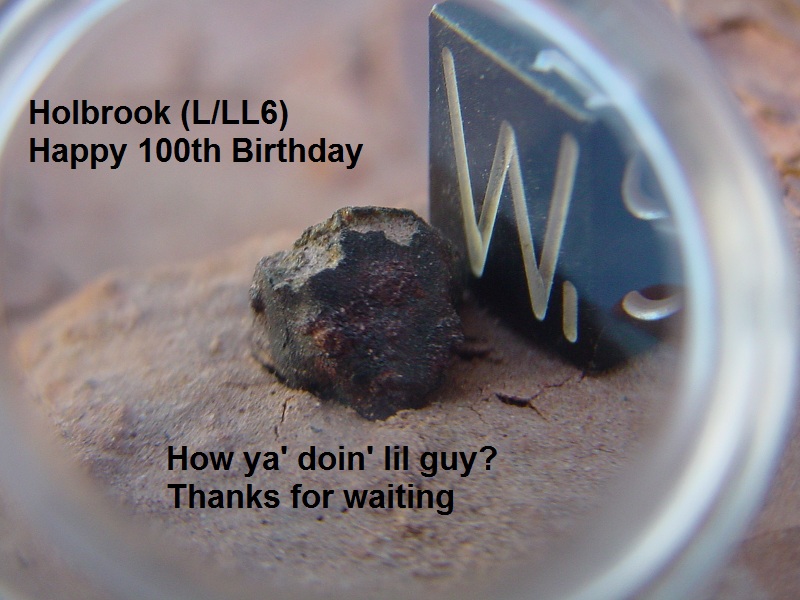 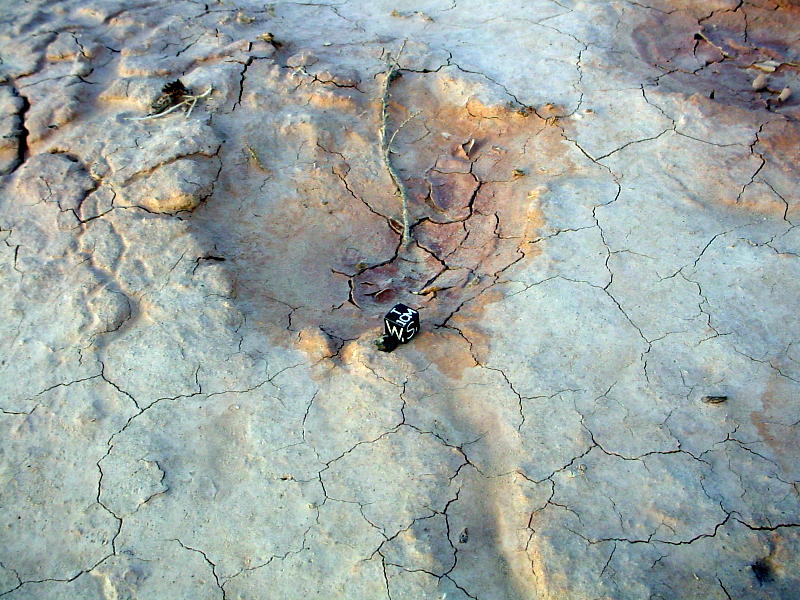 My 2nd find was found exposed right on the edge of a weathered hoof-print.
Rainwater washing the silt back into the hoof-print has exposed this once buried stone. 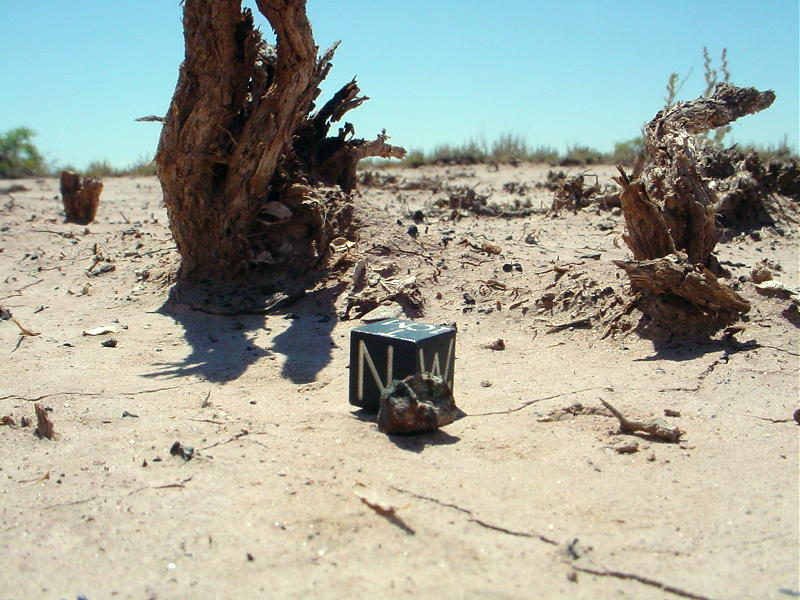 My 3rd find for the weekend was found exposed right at the base of an eroded hummock.
Because the shrub that once protected it, is now just a stump. 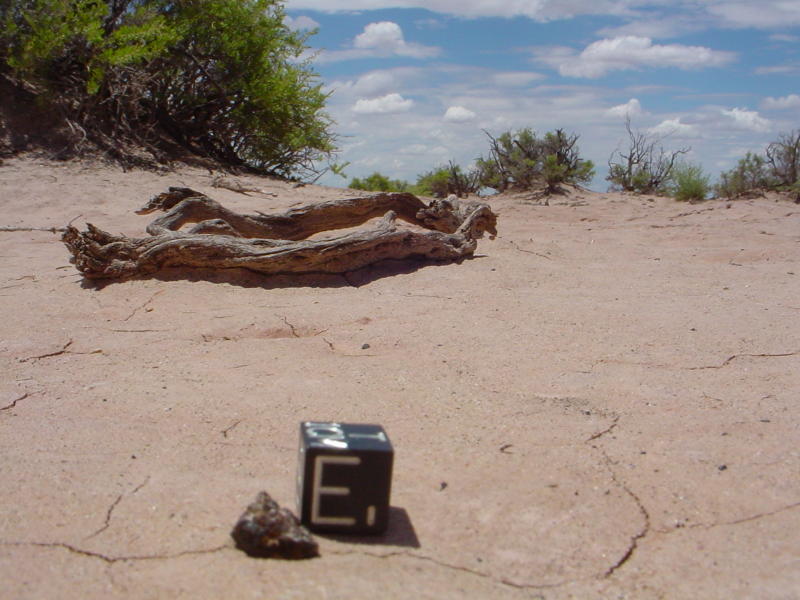 My 4th find was found right out in the open on a bare, smooth mudflat.
(Right where I was told “You won’t find any on those surfaces”.) 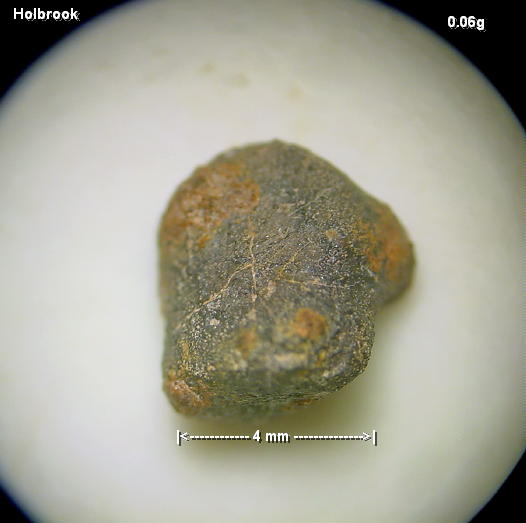 My 5th find was found with a magnet-stick near an old, eroded ant-hill.
(At 0.06grams, it’s rather heavy for it to be an ant-carried stony.
Would be equivalent to me carrying the Old Woman Meteorite on my shoulders back to my garage!)

The ant-hill grains of sand that are attracted to a magnet need to be examined under a microscope in order for them to be identified as meteorites. Fortunately, these “micro-meteorites” often look just like their bigger brothers, especially if they are 100% fusion-crusted grains, but if they are fragments it could be difficult to get a convincing ID. Unfortunately, the train-tracks are underlain by a bed of “slag” which has spread throughout the strewn-field supplying some very convincing meteorite-looking sand grains. 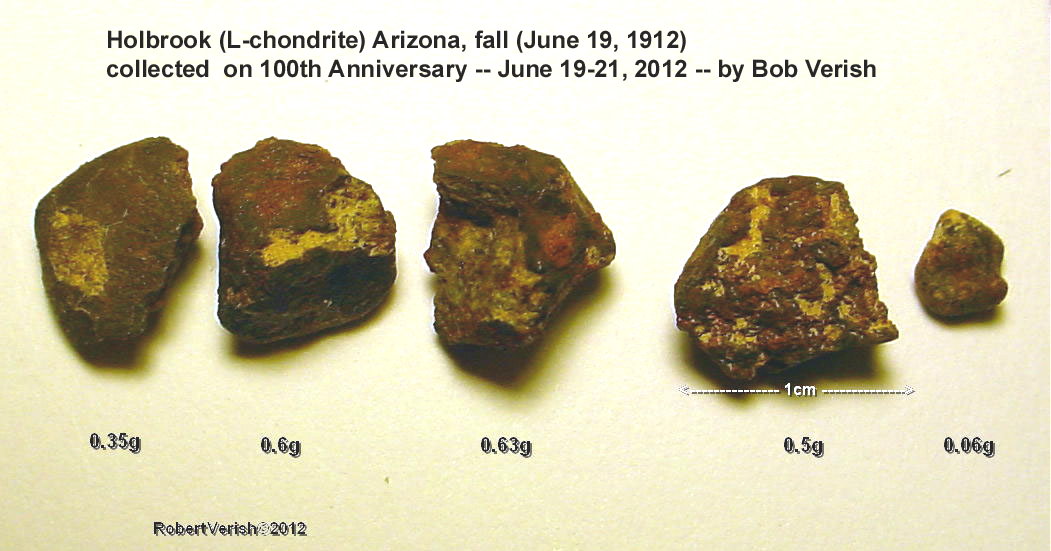 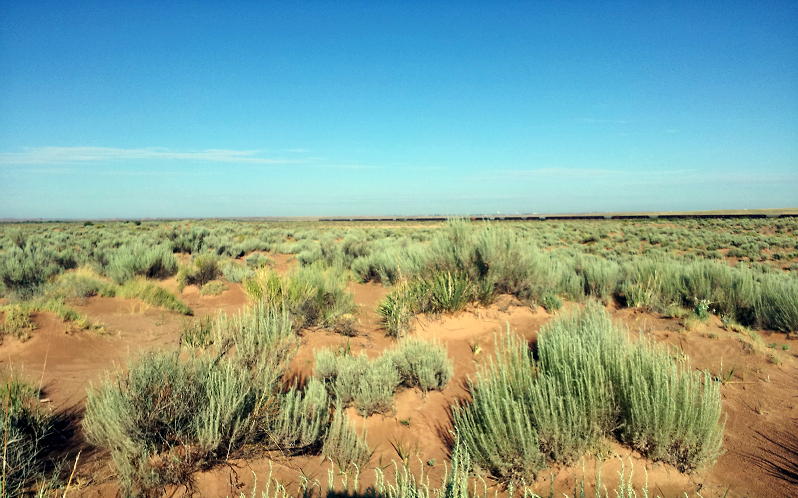 On the south-side standing on a high dune looking toward the northwest in the morning.
(A train is traveling west, up the strewn-field, going towards Holbrook.)
I am looking forward to next year, and to the “101st Anniversary Holbrook Meteorite Hunt”.

Meteorite-List Archives: for the results of a website Search for posts with the keywords “Holbrook+100th”, click HERE!

In Meteorite-Times Magazine: last years Bob’s Findings article for “Holbrook 2011” with images and a list of links pertaining to the 99th Anniversary Holbrook Hunt.

The Wikipedia: entry for Holbrook
– contains links to the Holbrook Meteorite.
http://en.wikipedia.org/wiki/Holbrook,_Arizona

More “REFERENCES“: the following are individuals who hunted between July 19th & 21st at the “100th Year Anniversary – Holbrook Meteorite Hunt” and posted (on the Internet) links to imagesof their Holbrook finds:

Erik Fisler:
– included a link to a great slideshow of his images titled: “Erik Fisler Meteorites’ photostream ”
in his Tue Jul 24 03:35:26 EDT 2012 post to the Met-List, with the Subject: 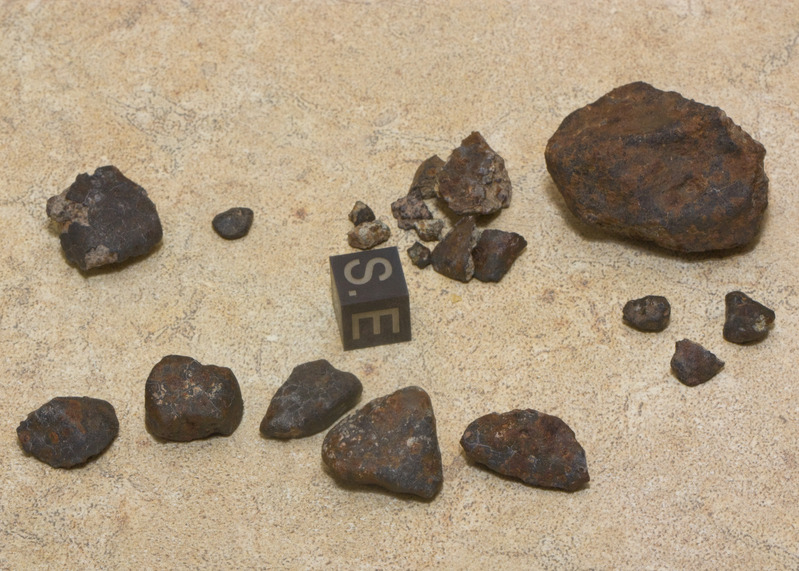 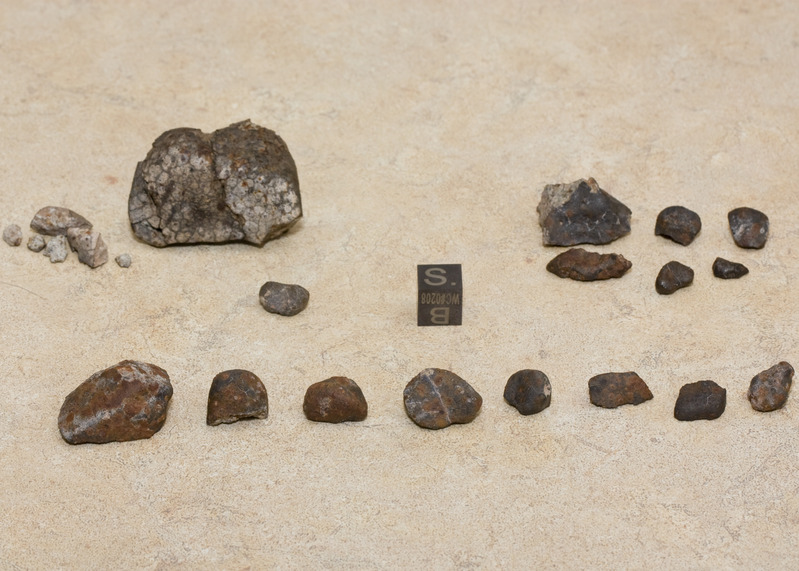 Michael Mulgrew:
– included a link to a great gallery of IMAGES (as part of his Holbrook Hunt 2012 “trip-report”),
in his reply to Erik Fisler’s post, titled: 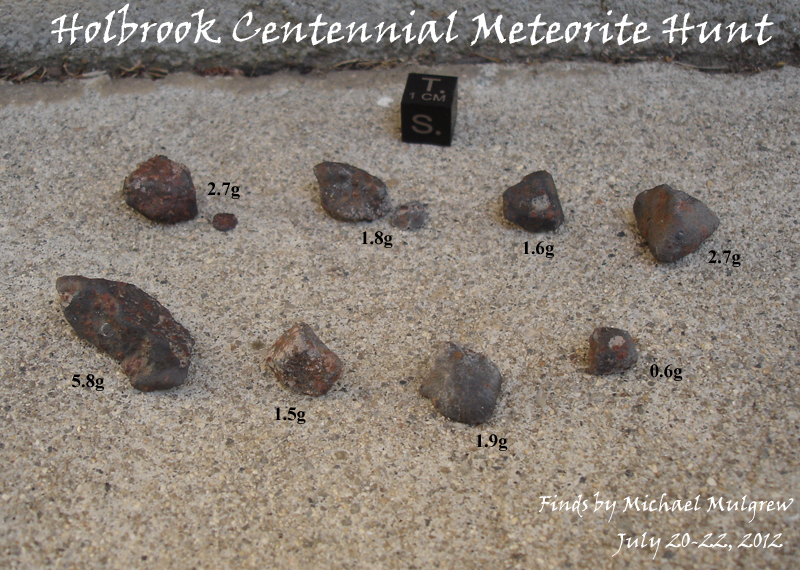 Richard Garcia:
the following image is courtesy of Richard Garcia. It depicts his three finds from the 2012 Holbrook Hunt and is one of several photos that he is sharing “ON-LINE“: 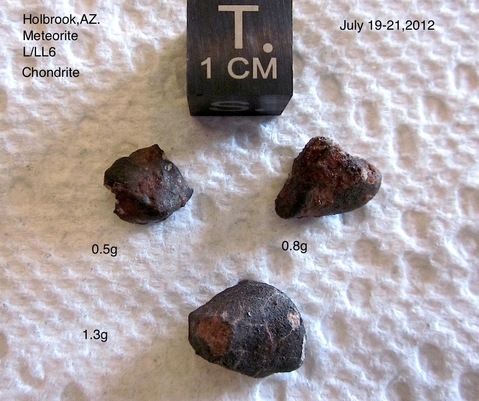 “Dolan” Dave:
the following image is courtesy of David Libuszowski. It depicts his 9.8g find from the 2012 Holbrook Hunt and represents the results of his one-day effort on Saturday morning: 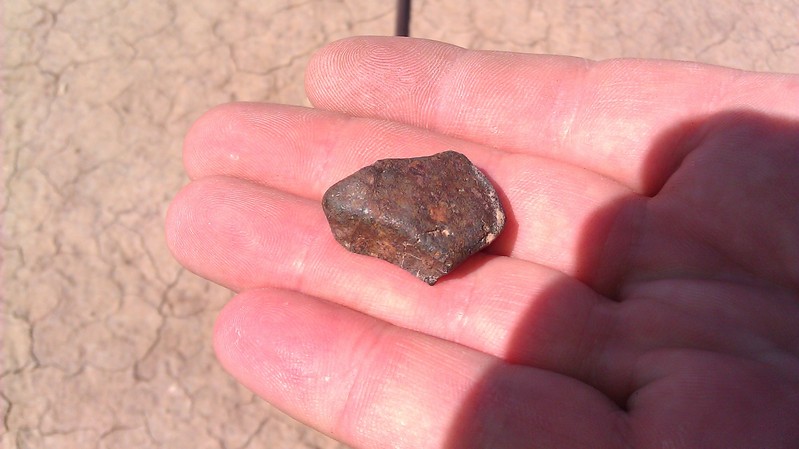 Jim Wooddell:
has a link to a file containing all of the results from the 100th Anniversary Holbrook Meteorite Hunt
on his YahooGroup website known as “DesertSunBurn“.
This file is in a folder on his Group’s website. The folder is titled:
[Files] : contains the Excel file titled, “Holbrook 2012 REVISION 4.xls”
which is a listing of the “Holbrook Hunt” participants, the ~93 finds made during those 3 days (July 19th-21st), and the ~200grams total weight found – with underlined numbers giving links to images of finds.
http://tech.groups.yahoo.com/group/desertsun burn/files/

To go back to my 2011 Holbrook article, click on the word “REFERENCES:” for the list of links pertaining to the 99th Anniversary Holbrook Hunt.

Bob is a retired aerospace engineer living in Southern California, and has been recovering meteorites from the Southwest U.S. Deserts since 1995.
PrevIMCA Insights – August 2012
Meteorites and TelescopesNext