It had been several years since I had been to the Griffith Observatory and my granddaughter had never been so we took her. My wife loves the place too so it was an exciting day for all of us. The parking on the day we went was difficult but as it turned out we did get a spot very close and not down on the approach road. I knew Kayli would want to see the planetarium show so we looked around a little then bought our tickets for the showing in a couple hours. That would give us enough time to see everything and go to the gift shop as well. She had been saving her money for a while and was going to find something cool to get for herself.

The exhibits have improved so much over the years. Some are still the classics of the past like the solar spectrum and the solar telescope imaging. The Camera Obscura is the same. The Tesla Coil is in a new location as it has been for the last few years. They do not run it I guess without finding the correct person and twisting his arm. But, that is OK everyone in my family has seen a lot of tesla coils. Making them was a favorite hobby of my dad and I years ago. I still have several around the garage from big ones to little table top size. All kinds from classic monopolar to unusual bipolar types. Some of the new exhibits at the observatory are very nice indeed. The astronomy history ones have small holographic like animations that you watch. Very cool. After you have been to the old portion even with its great new exhibits it is time to run downstairs to the important part where the meteorites, tektites and impact rock exhibits are.

As you come into the lower level you meet again, as at the Natural History Museum a display with many offerings from Robert Verish. Bob has put a great many meteorites from California at the Observatory. Other hunters are represented also, but Bob has really given from his heart to Griffith. I tried to get the best shot I could but it was crowded and people were actually getting annoyed with me taking time in front of the display cases to photograph them. 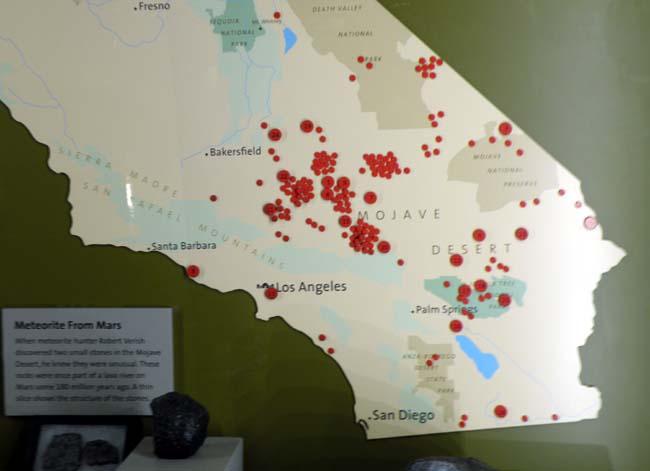 Some where in this photo one of these dots represents Paul’s find and my own find from California. If I every get off my butt I have a couple more that Bob has the information on but that I have never gotten anyone to classify. This picture is a great visual history of the recent and past recovery of meteorites from California. 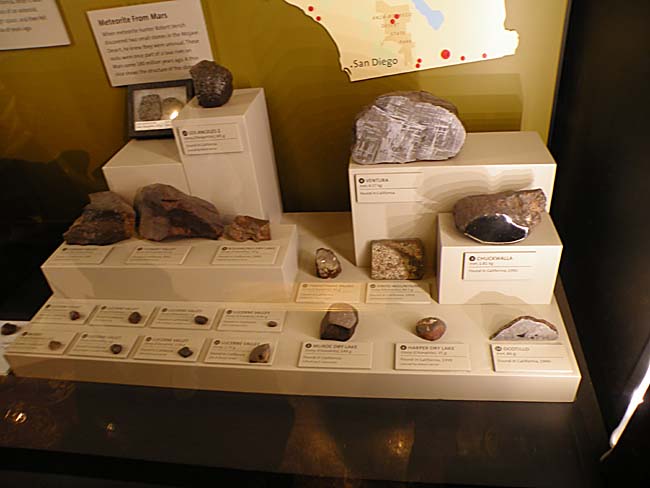 Down just a couple cases is a display on tektites, it is always nice to see Darryl Futrell’s name on the tags. This display was once upstairs in the old section along with just a few meteorites. I am glad that they have kept it and put it in a great location.

There was a meteorite and meteor-wrong display. Kayli has seen enough of her grampa’s meteorites all her life. So she took the challenge and tried to find the meteorites mixed with the other items. I am proud to say that she got most of the meteorites and none of the wrongs. They had some good wrongs in there too. One piece of hematite that was quite meteorite looking. She and I both failed to see the one very small stone that was sort of nestled next to another rock. A fun display.

Next to the meteorites were a couple of other really neat items to not miss if you visit. The two cosmic ray detectors were new since I visited right after the reopening. They had a very awful cloud chamber years ago. What they have now is so cool it is hard to say enough. You can just stand there and see particle trails of every shape and style with no difficulty at all. None of the old wait for the cloud to form and then try to look real fast before it dissipates. The cloud is vapor at the bottom of an acrylic box and it is always there and so are the particle trails. The spark detector is right next to it and it is like a comic ray bug zapper. Also very cool.

The Observatory has some great Canyon Diablo meteorites. Here are the two in the meteorite area. I always wish I knew when specimens like these were acquired. It is one of those Meteor Crater history things I guess. I think these are probably ones gotten in the 1930s. The Observatory has been around for 80 odd years I think. 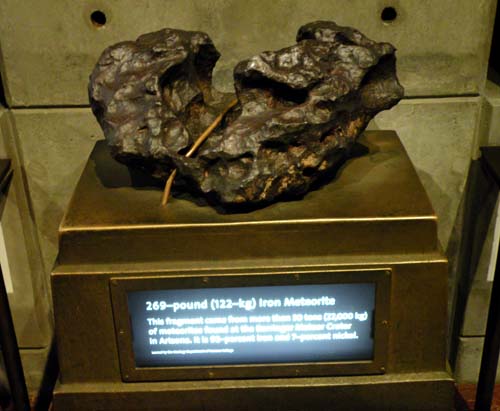 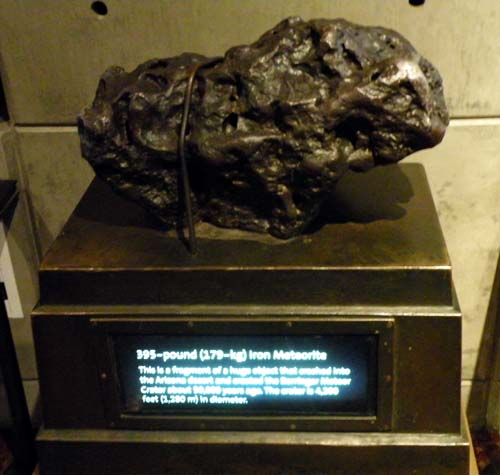 There is another exhibit that I found really neat. A thin section microscopic viewer is in the meteorite area. It has a large eyepiece with fabulous eye-relief. So here is a picture I got just holding the camera in front of the lens. There is a small arm the projects from the side of the barrel. You can rotate the polarizing filter with it. The meteorite is visible in plain and cross polarization. You can only see the area they have it put on. But, what a nice barred chondrule they have chosen. 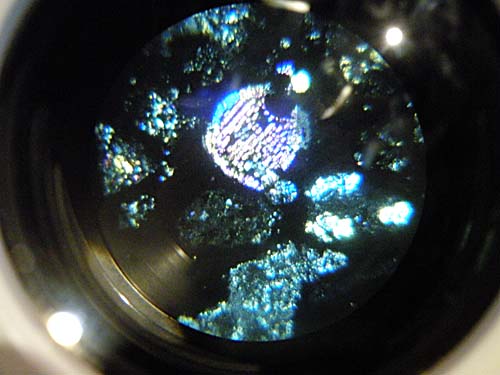 We finished down in the planet and galaxy area where Einstein is still sitting. I took a picture of my wife with him the last time. Here he is talking to our granddaughter this trip. 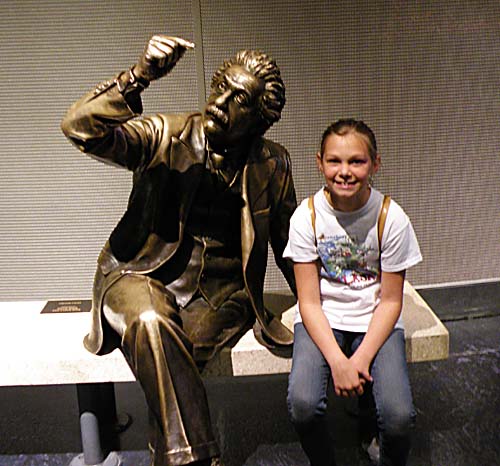 Be sure to check the dates and times for your visit the Observatory is not open everyday and the time it opens is different also. But, it is one of those not to be missed locations in Los Angeles. It is really worth a visit every few years since they keep it very fresh with new exhibits.

Until next month, bye.

The Meteorite Exchange, Inc. was born in 1996 with meteorite.com and Meteorite Times Magazine in 2002. Still enthusiastic about meteorites and all things related to them, we hunt, collect, cut and prepare specimens. We travel to gem shows and enjoy meteorites as much now as in the beginning. Please feel free to share any comments you have on this or any of our other sites.
PrevSutter’s Mill #12 Meteorite
Pantar: The Sky is Falling. Really!Next