It is one of the interesting factoids of tektite lore:

Never, not even once, has a splashform tektite been reported that shows an embedded object or clear imprint from the ground surface on which the tektites fell.

However, that noteworthy constant only serves to sharpen the search for the first one. Most tektite aficionados have visited the time and place of the falling of the australasians in their imaginations many times. For a great many of us the vision is similar: we immediately find ourselves fortunate to be present at this great event in thought rather than body, for it involved a towering fireball exploding into the sky that no embodied mortal could witness and survive. As the fiery head of the plasma rocketed upwards into dark space, a deep darkness settled below. Then a storm of deadly blobs of black glass began to fall like hail, whizzing and thudding all around. In this particular vision, it just seems inevitable that somewhere the falling tektites were still incandescent and should have draped over and molded onto objects on which they fell. And so, we are always looking……

This column focuses on the most commonly misidentified “embedded object”. In some regions of Thailand and Vietnam, tektites are found in a laterized soil profile where deep chemical weathering has dominated . Specimens sourced from such regions often have hard ferricrete infillings tightly adhering to deeper skin ornamentation features. 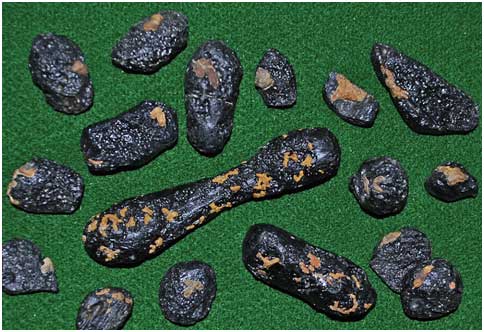 The deepest pits and grooves and impact starbursts filled by orange ochre-colored fingers of iron precipitates often give rise to distinctly hieroglyphic-looking patterns. (Predictably, such ancient scripts command a premium on auction sites!) 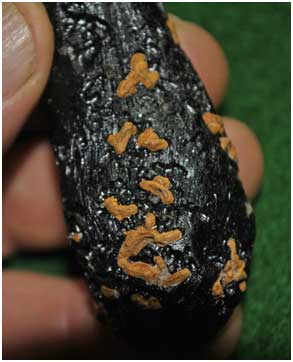 In the early days of our tektite business, we were eager to present bright, clean specimens, and we put a great deal of effort into aggressive cleaning with acids and dental picks. I became all too familiar with this material. It can be flinty hard, and if it fills a void with slightly overhanging edges, it can actually require drilling to remove. For those who choose to believe that they have material that is embedded in the tektite, this very difficulty of cleaning becomes evidence.

The ferricrete is composed of iron oxides and oxyhydroxides like hematite and limonite. In deep chemical weathering, most elements are progressively leached away. But, in the presence of oxygen, iron forms rust and becomes highly insoluble. This process can result in minable residual concentrations of iron-rich laterite with rock-like ledges of “ferricrete” duricrust. This sort of iron precipitate is a completely natural and normal part of lateritic soil development

Here we touch on a most important subject: there is another element which can form economic deposits in laterization environments: nickel! Often such deposits are also enriched in cobalt. Anomalous enrichments can occur anywhere mafic or ultramafic bedrock is being weathered.

In the very beginning of our tektite journey, I labored under many misconceptions. I had read of tiny beads of Ni-Fe recovered from a few tektites (I just didn’t comprehend how tiny). I supposed that such impactor remnants might be the nucleus for the little ferricrete nodules we sometimes saw. And so, I sorted through boxes of tektites, searching for examples, thinking that I was amassing a fine collection of impact glass containing remnants of nickel-iron impactor material. I was wrong.

Returning to the nickel. Someone once approached me with a chemical analysis from a large ferricrete infilling in a spherical bubble cavity, which, on the basis of an anomalous nickel concentration, he was sure was terrestrialized meteorite material. I had to share that, depending on the character of the bedrock weathering away, nickel was an entirely possible natural enrichment in a ferricrete environment and consequently cannot be considered diagnostic of meteorite content. 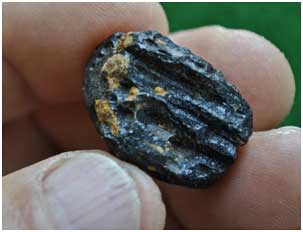 Another fruitful source of confusion arises in Muong Nongs or other tektites with elongate tubular bubble cavities. These voids can be infilled with lateritic iron and if then intersected by a saw cut will appear as a round pellet of limonite completely surrounded by glass. Add a little anomalous nickel and cobalt and this can be very misleading indeed. 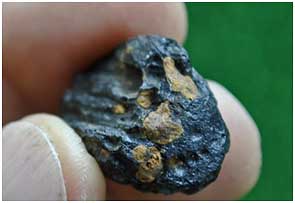 Over my career, I have worked in lateritic environments all over Africa, Australia, Central and South America, and Southeast Asia. This is a familiar subject for me, and in the early days when Thailandites were abundantly available, such pedogenic iron material was common. I had opportunity to examine (and clean) thousands of pieces. The ferricrete infillings are not terrestrialized fragments of the impactor (even if they contain Ni!) They are not embedded clasts or pebbles from the ground surface on which the tektites fell.

Tektites showing deposits of dense ferruginous material such as we have been discussing have a different sort of story to tell. Such stones were held in the embraces of a soil undergoing extreme chemical weathering in a low-relief swampy jungle environment. Quite sharply defined laterite profiles are a characteristic result. In this case, a redox boundary controlling pedogenic translocation of iron coincided with a tektite-bearing zone in the local stratigraphy.

No need to further complicate that one.

Norm Lehrman is a recently retired exploration geologist with over 45 years experience. His career involved fieldwork in over 35 countries on every continent except Antarctica. While stationed in Australia, Norm and his wife, Cookie, became interested in collecting Australites, which ultimately led to a generalized passion for tektites, impactites, meteorites and related materials. In 1999 they founded the Tektite Source business (www.TektiteSource.com) which has evolved into one of the world's premier providers of tektite and impactite specimens. Norm has retired to a ranch near Spokane, Washington, where they continue to serve tektite aficionados worldwide.
PrevProbing the early Solar System at the atomic level.
Mukundpura CM2Next