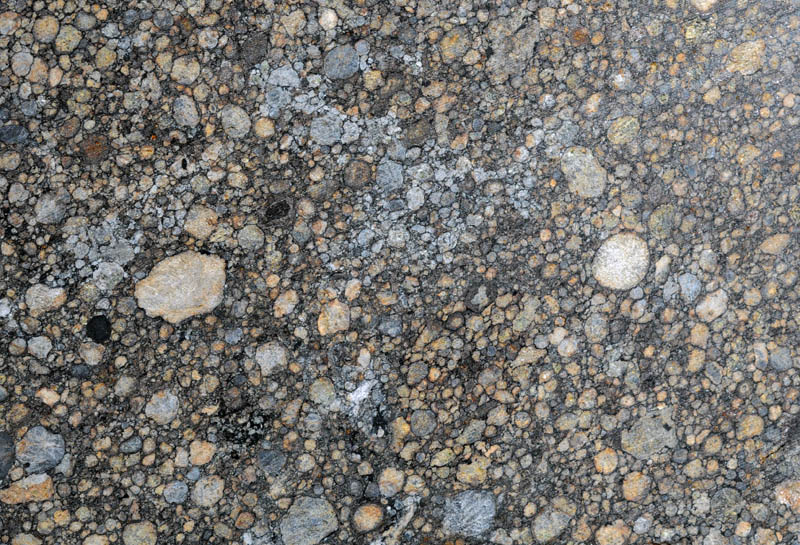 Let’s be honest, usually when we talk about a meteorite being gorgeous, beautiful, amazing, stunning, or magnificent, the average person might not be able to tell it from one we describe as ugly, hideous, or gruesome. But in the case of Krymka, even the casual observer is impressed with the look to the point of using their own words like gorgeous, beautiful, amazing, stunning, and magnificent.

Krymka fell to earth as an LL3.1 chondrite on January 21, 1946, but as our meteorite classification scheme matured thanks to Grossman and Brearley (2005), today we refer to Krymka as an LL3.2. 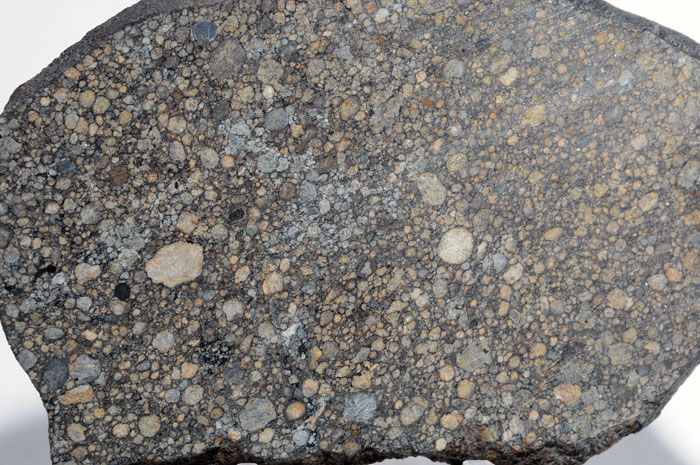 A number of years ago, a slice of Krymka blipped my shopping radar and I jumped on the chance to add a slice to my collection. Arriving in my postbox was a absolutely gorgeous crusted complete slice with more chondrule density, definition, and diversity than I have ever owned in the form of a witnessed fall. I do have to qualify the statement as “owned” and not “seen” because I once spent some time with Semarkona in the meteorite lab at the Smithsonian. Semarkona is the world’s only LL3.00 and looks it!

Oddly, the fall of Krymka is reported to have been a shower of 25kg that was recovered soon after it arrived, and another 25kg was recovered at a later date. What’s odd about that you might ask? Well, nothing except the Catalogue of Meteorites reports only about 13kg is accounted for world wide. How could you misplace 39kg of meteorite this amazing. 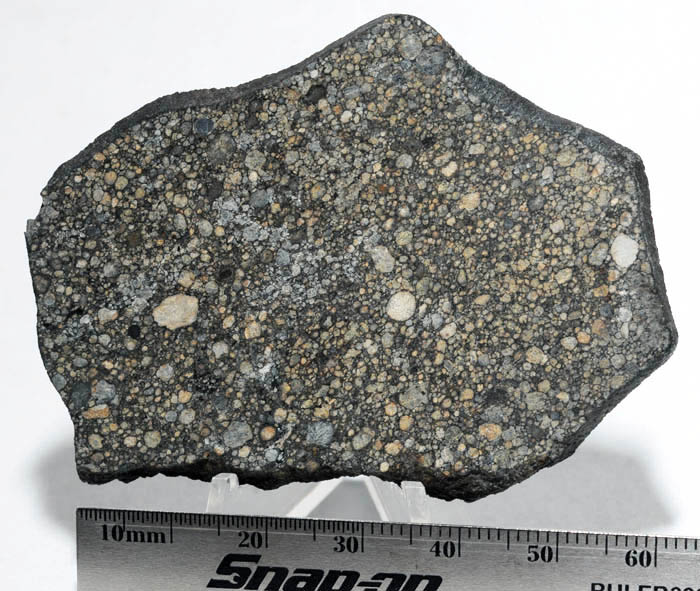 Krymka is characterized by the occurrence of a high modal abundance of xenolithic clasts (Semenenko and Girich 2001; Semenenko et al. 2001). These fine-grained foreign inclusions are dominated by carbonaceous clasts, which are of extraordinary scientific interest.

This very rare, fine-grained, dark material has so far been discovered only in two meteorites, Krymka (LL3.1) and Supuhee (H6). Laul et al. (1973) detected an enrichment of Ag, Tl, and Bi in these two ordinary chondrites. They concluded that this enrichment has its origin in an admixture of a phase rich in these elements in a late condensate introduced during a brecciation event. Since the petrographic carrier of the volatiles could not be specified, they named this material “mysterite.”

The mineralogical, chemical, and isotopic features, as well as the nature of the graphite and other minerals, were investigated to obtain information on their mineral associations with the aim of finding conclusive evidence concerning the origin of mysterite, a material that had already been associated with comets. The results of these combined investigations allow the following conclusions: the xenolith formation is a result of the accretion of heterogeneous components in a region depleted in chondrules. After this process, which was followed by lithification and a probable collisional fragmentation of a primary carbonaceous body, this xenolith and some others (Semenenko et al. 2005) were covered with extremely fine-grained silicate dust. Together with the main Krymka constituents, the xenoliths were accreted in the Krymka parent body.

The detailed TEM study of the Krymka carbonaceous xenolith K1 plainly indicates that a thermal and shock metamorphism must have taken place, either on a primary body of the xenolith or on the Krymka parent body itself. 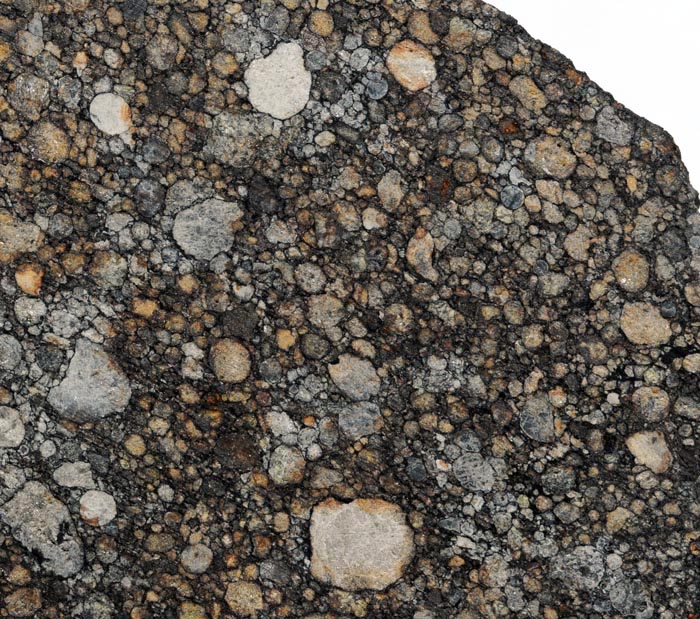 Although a large number of presolar Al2O3 and MgAl2O4 grains have now been studied, only a handful of presolar hibonite (CaAl12O19) grains and a single presolar TiO2 grain have been previously reported. We report the identification and detailed isotopic characteristics of 46 presolar oxides from a new residue of the Krymka unequilibrated ordinary chondrite (LL3.1), including 15 Hibonites and 2 TiO2 grains.

As we begin a new year for the Accretion Desk, I would like to personally thank my readers. The emailed comments are fun to read. I know there is a small but growing number of collectors who specialize in historic meteorites, witnessed falls, or like me, prefer both. Thanks for reading!

Dr. Martin Horejsi is a Professor of Instructional Technology and Science Education at The University of Montana, Missoula. A long-time meteorite collector and writer, before publishing his column "The Accretion Desk" in The Meteorite Times, he contributed often and wrote the column "From The Strewnfields" in Meteorite Magazine. Horejsi is also the Lead Technology Reviewer for The National Science Teaching Association, and just celebrated his 22th year working with NASA and the JPL in education and public outreach (EPO), and is a NASA Solar System Ambassador. Horejsi specializes in the collection and study of historic witnessed fall meteorites with the older, smaller, and rarer the better. Although his meteorite collection once numbered over a thousand pieces with near that many different locations, several large trades and sales and trades have streamlined the collection to about 250 important locations with all but 10 being witnessed falls. Many of the significant specimens in Horejsi's collection are historic witnessed falls that once occupied prominence in the meteorite collections of Robert A. Haag, James Schwade, and Michael Farmer. Other important specimens were acquired through institutional trades including those from The Smithsonian Institution, Arizona State University, and other universities. Horejsi was awarded the Harvey (Nininger) Award in Tucson in 2006, The Brotherhood of Guardians of the Ensisheim Meteorite in 2011, a JPL Inspiration Person, on the JPL STARDUST Team that was awarded the Smithsonian Air and Space Museum Annual Trophy in 2008, and former board member of the International Meteorite Collectors Association, and the Northwest Council for Computers in Education.
PrevOpportunities Missed
Ring Waves And Aerodynamic Flow Lines On AustralitesNext