Since I have been collecting tektites, I have been intrigued by some of the odd surface features on several of my specimens. I have seen these features described as “impacts,” “bubbles,” and “rings.” But every one I’ve picked up has raised more questions than answers. A few past articles have suggested how these features were formed, and I have continued my search for a specimen that might tell a more definitive story.

Right after a tektite is formed, and while it was still hot and in motion, the exterior would begin to cool at a faster rate than the interior. Since we know that tektites were shaped in flight, giving us the vast array of splash forms, we can conclude that the cooling exterior is still somewhat flexible. Any surface bubbles or thin areas on the cooling surface could rupture allowing the still molten interior to press and ooze out from the center. This could be the result of pressure from the outside cooling and contracting, from centrifugal force while the tektite is in flight, or from the force of impact with the ground when the exterior is deformed. Any of those forces could cause the hot interior to be pressed out of the new hole in the surface. The amount of material that would press out of the interior would depend on several factors, including the size of the specimen, the size of the breach, the fluidity of the core material, the plasticity of the exterior and the movement or deformation of the specimen after the breach
occurred. 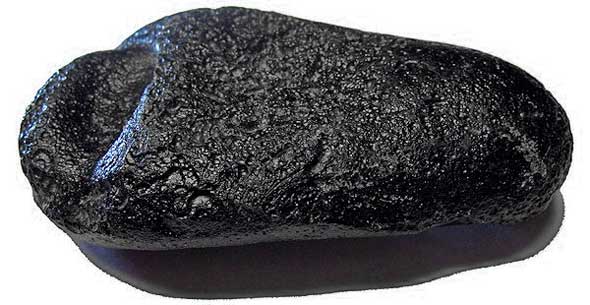 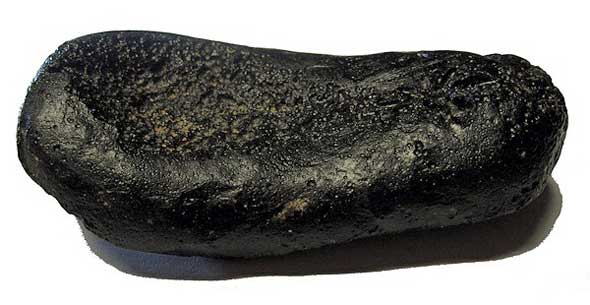 As you can see, this specimen is an extreme case of a surface “ring” on the end of 164 gram bar shaped splash form Vietnam Indochinite. 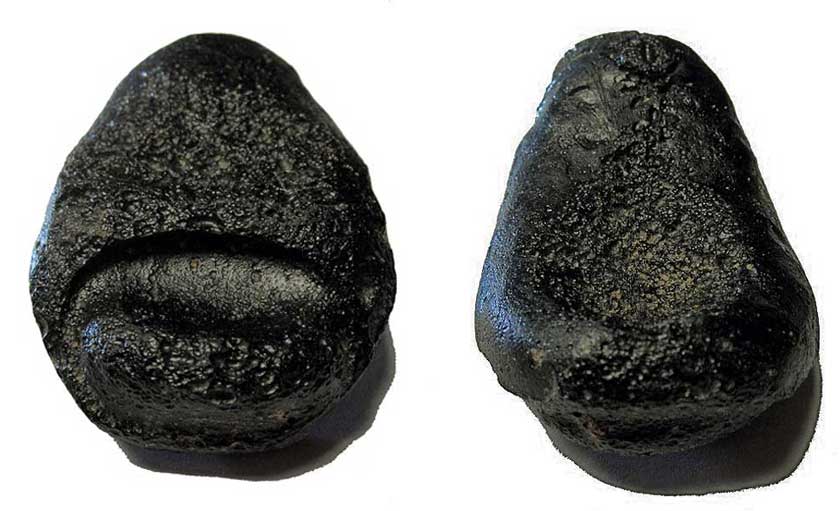 I think this is the first tektite I’ve ever owned that stuck it’s tongue out at me in defiance.

The breach in the surface exterior is oval shaped, approximately 4 cm wide by 3 cm high. So much of the interior of the tektite was extruded that the central area at the end of the bar has deformed and thinned enough to allow light to pass through the remaining material (in the photo above, the thin area is just at the rear of the “tongue.”)

It looks just like someone opened and squeezed a tube of toothpaste — thinning the pressed area and forcing the interior out of the available opening.

Until I came across this Vietnam Indochinite, I was not sure if these features were due to an impact or an interior bubble. With this specimen in my hand, and the examples of other tektites with similar “rings” for reference, I suggest that the simple explanation for these “ring” tektites is that they are the result of more fluid interior pressing out through a breach in the surface while the tektite was still molten. While I have no doubt that there are tektites out there with bubbles close to the surface, or even two tektites melded together from a collision, I think that this simpler explanation works for the majority of the specimens I have seen and collected.

Paul is the webmaster for all of The Meteorite Exchange's websites including Meteorite Times Magazine. His fascination with all things space related began as a young boy during the Space Race. His free time is divided between meteorites, astrophotography, webmaster, and the daily operations of the ecommerce website www.meteorites-for-sale.com.
PrevAccretion Desk Will Return Next Month
Oriented Taza Meteorite – Northwest Africa 859Next