Last month in my Jim’s Fragments article I wrote about the dangers to a tektite specimen during the cutting process. It is obvious from the title of this month installment that those dangers were realized. At about the 40 % point in the cut the tektite exploded. 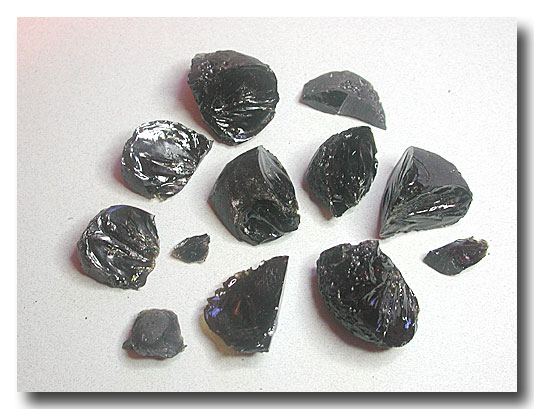 Some pieces remained on the saw, with others spilling out into the air off the saw. I collected up the pieces that I believed constituted all the new parts and began a reassembly. I was pieces short. A longer hunt in my garage finally produced the two additional pieces which were missing.

That is enough talk about the destruction of the tektite. The point in cutting it was to reveal the nature of the inside of the specimen. Was there a bubble that produced the bulge on the surface? Or in this case was the bulge caused as Paul and I were convinced, by a small, cooler, harder tektite hitting and welding to a larger, hotter, softer tektite. I had desired to cut the piece straight through the bulge and make a thin slice that I hoped would reveal the independent schlieren patterns of the two welded portions. As it turns out I did not need to do that to find some of the answers. And, that cutting though still possible, will not be done at the present. The shattered specimen has become far more interesting as it is now. So further cutting will be deferred. 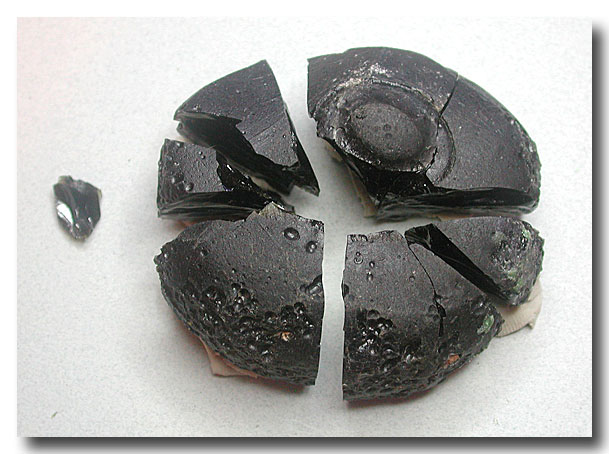 I am not going to use a lot of words to describe the pictures.  The pictures do a much finer job of showing what’s going on. There was a discussion a few months ago about the cause of this unusual tektite form. One idea was that a bubble inside pushes them up. The other idea being as I mentioned above of tektites being welded together.

In this picture the complete unshattered specimen is seen with the bulge and ring valley surrounding it. Other than these two features the tektite is unremarkable. It has the common cup shaped pitting. It has the normal grooved pits and the bald spot found on most specimens. The focus will be therefore on the two uncommon features: the bulge itself and the associated valley. The bulge as seen in the next photo has a groove and lip structure on the side which was the first indication to us that no bubble inside formed it, unless the wall thickness was substantial. 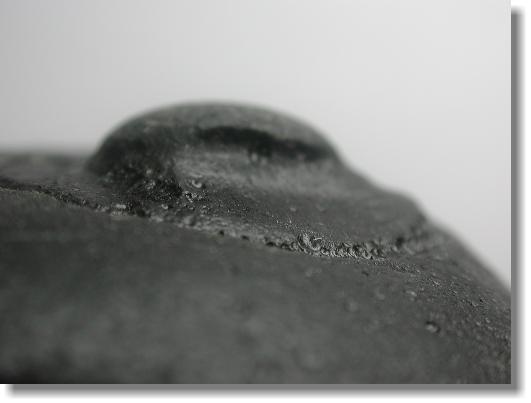 The contours of the bulge itself were not those of a bubble. There is convex curvature on the outside of the “bulge” in the bottom of the valley. If followed by eye from side to side the curvature of the bottom of the smaller tektite can be traced even though it is welded and submerged in the larger tektite’s body.

The valley which surrounds the bulge has a fine texture of parallel lines that run from one valley side down the valley and up the other side. After some considerable thought one possible explanation is that plastic glass of the large body was stretched by the impact. After penetrating the glass of the larger mass the smaller cooler body may have floated back up slightly bringing with it this newly welded and stretched glass, pulling a little glass away to create the valley. Being cooler or even colder it may have chilled the glass around it preserving the fine line stretched glass texture.

On now to the main discussion of the internal nature of the tektite. There is no bubble inside the tektite which caused the bulge. There is no evidence that a bubble was ever there and later collapsed . This tektite is a solid disk of glass except for the occasional tiny bubble common to all splash form tektites. It is in fact very possible that a one millimeter tiny bubble was the cause of the shattering of the tektite during cutting. The end of my saw kerf touches one such bubble. Having shattered a few tektites by sawing them I can imagine a tiny chip and fracture being created as the blade breaks through the bubble. This might well be enough to begin the stress relieving cascade of shock waves. But the tiny bubble was not closer than about half an inch of the bulge.

I think it is significant that the bulge (of solid glass) was kept intact during the shattering process. The welded ring likewise remaining attached to the bulge while the entire rest of the larger tektite disintegrated into pie slices below and around the little bulge. I suggest as a possibility that though it was welded to the larger tektite body it was not melted and incorporated into the larger body’s stress pattern. Its impact (which we believe to be what happened) may have even increased the stress by changing the shape of the larger mass near the end of its plastic state, and possibly chilling one region quicker. 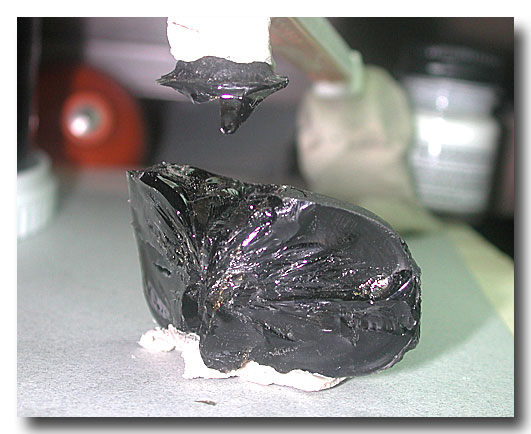 As always, we welcome opposing views. This is our theory which we have spent years thinking about prior to any cutting and over a month pondering since the fateful explosion.  We have confidence that some of this is correct and reflected in the specimen. Other is conjecture based on what we believe is the latest thinking in science about tektite formation. But, like every aspect of the topic of tektites there remains much that is still not completely settled.

However, there was no bubble.

The Meteorite Exchange, Inc. was born in 1996 with meteorite.com and Meteorite Times Magazine in 2002. Still enthusiastic about meteorites and all things related to them, we hunt, collect, cut and prepare specimens. We travel to gem shows and enjoy meteorites as much now as in the beginning. Please feel free to share any comments you have on this or any of our other sites.
PrevCassini at Saturn: A Personal 32 Year Journey
Plane Crash At Meteor Crater RevisitedNext