Ensisheim – Meteorite 2011 Images from the international gathering of meteorite aficionados. 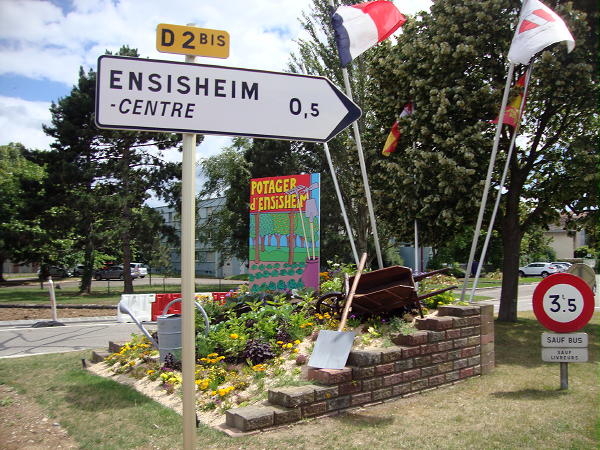 This was the year that I finally made it to Ensisheim.
For years I’ve been reading about and seeing the images from all of the meteorite collectors and dealers who attend this “Show”. But this was the year that I got the opportunity to return to Europe, so I made sure my trip would coincide with this annual event. But chosing this time of year to visit France and Germany is a “no-brainer” because the weather is so mild in the late Spring. In June the weather is quite variable, and although there were brief storms during the week prior to, and after the “Show”, the conditions over the course of the weekend of the event were excellent.

I mentioned “return to Europe” because I actually lived in Germany for a short while nearly 40 years ago. It was during that time that I met for the first time a very young woman by the name of Monika Waiblinger. That girl impressed me so much that, 40 years later, she is now my fiancee. Yes, that’s right, you know her as Moni “Meteorite-Huntress”. And being my fiancee, I felt that this was a good time to go to Germany to meet her family and relatives.

So, our trip to Ensisheim is actually just a part of a 2-week long European vacation. That weekend of the “Show” spent in the Alsace region of France was “bookended” by a prior trip to the Steinheim Crater, and then a subsequent return trip to France for the “Mineral Show” in St. Marie sux Mines, soon followed by another trip to Nordlingen and the Ries Crater. I won’t be describing those trips in this article because they each deserve their own individual articles.

Another thing I won’t be describing is the history of the Ensisheim Meteorite Show or the fall of the Ensisheim meteorite, or the origin of the Saint-George’s Brotherhood Since this article is already one of several in an on-line magazine dedicated to meteorites, I will spare the devotees an education they have already acquired. But, for those of you who may have arrived here by way of an errant Google search engine result, or are otherwise un-initiated to our peculiar subculture (yet are now curious about “Alsacian sky rock collecting”) you would be best served to go directly to my “REFERENCES” section at the end of this article.

Actually, compiling a list of references that are Ensisheim-related was my main objective when I wrote this article. I wanted to offer a web page that would serve as a compilation of all the various image galleries for the 2011 Ensisheim Show. Besides, most of those galleries were far superior to my images anyway. And now I am free to write a more personal reflection of our trip to Ensisheim. 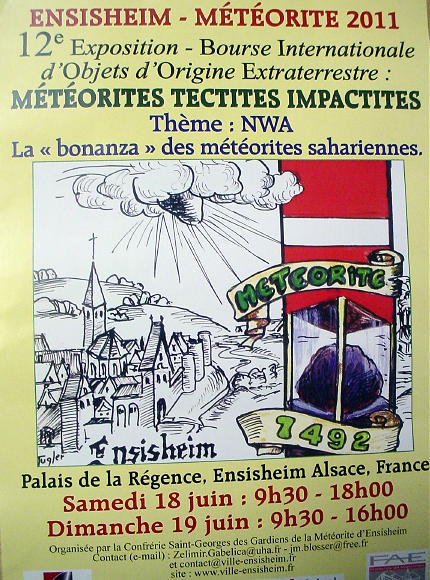 Translation = “Ensisheim – meteorite 2011 Show,
12th Annual Exposition & International Exchange(or Study) of Objects of Extraterrestrial Origin:
Meteorites & Tektites & Impactites
Title of Lecture: NWA, the Bonanza of Saharan Meteorites.
At the Regency Palace, Ensisheim Alsace, France, 18-19th June 2011”.
(This is a very rough ENGLISH translation.)
(You can click on the above image in order to ENLARGE.)

This wasn’t Moni’s first trip to the Ensisheim Meteorite Show. She had attended the 2006 Show. So, this was great for me. I had my own personal guide. Moni was able to offer me a running commentary as what was the same from her 2006 visit, and what had changed. The good news is that Moni didn’t see any major changes. There were some vendors from 2006 that didn’t set-up this year, but overall there were more people selling (but they all weren’t selling meteorites). Moni didn’t go so far as to say that there were more meteorites being offered by vendors, but she did say that the percentage of unclassified NWA was less. It was my impression that there was very little room for any additional vendors, and the room that was made available for each vendor precluded that only the very best material would be displayed.

My one suggestion (in order to make for more display/vendor space) would be to move the table with all of the Omani meteor-wrongs (at the top of the spiral stairwell, right at the entrance) to a less conspicuous spot (like across the courtyard and into the cathedral, where only prayer and a miracle could turn those -wrongs into -rites). At the least, the meteor-wrongs were an amusing distraction for the seasoned collector, but must have been very misleading for the neophytes. Unfortunately, everytime that I would enter or exit the display room in the Palace, I would pass by this table full of rocks that some poor soul had brought all the way from the Omani desert. And as if the table was beckoning me to try and find a real meteorite, I would stop and examine a few more of these meteor-wrongs, hoping that one of these desert rocks was a meteorite. But it was a waste of my time, because they were all terrestrial. In hindsight, my time would have been better spent had I went straight down to the plaza and had a few more drinks in the tent with the other attendees.

Come to think of it, we should have spent more time down in the plaza. Because we had a great time there; whether we were drinking in the tent with old friends, or meeting people, or making new friends, or eating with them out in the open-air cafe. 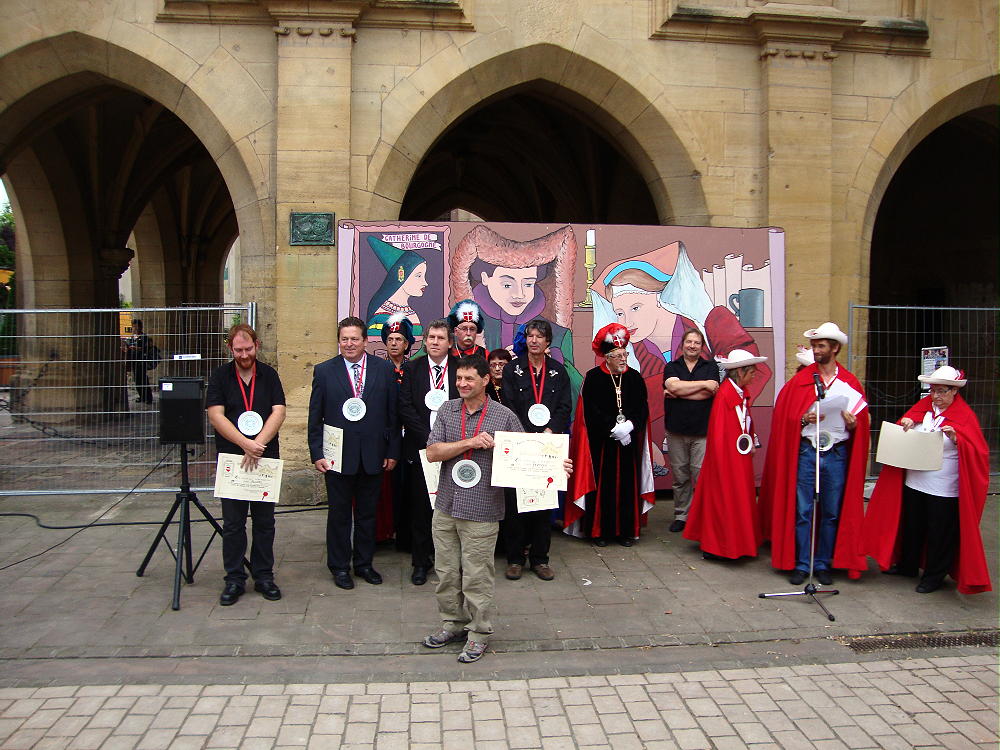 Five more Guardians are inducted into the Saint George’s Brotherhood. In this image our own Martin Horejsi from Montana USA, author of the “Accretionary Desk”, stands front and center with his award. (You can click on the above image in order to ENLARGE.)

Speaking of meeting old friends, it was a pleasure to run into Martin Horejsi early on the first day, and we were thrilled to be present at the ceremony when he was inducted as a Guardian into the “St. George’s Brotherhood of the Ensisheim Meteorite”. Martin was one of the first Americans that we met upon our arrival, and I found it appropriate because his article, “Ensisheim! The King of Meteorites” is one of the best tellings of the Ensisheim story that I ever read.

Martin had brought his son, Lucas, with him. In fact, entire families were not the exception at Ensisheim. Lucas was kept company with Dave Gheesling’s daughter, Maddie. Dave’s family was often seen with Russ Finney’s family, as well as, with Sven Buhl’s entire family. We all stayed at the same hotel, The Domaine du Moulin. According to Moni, this hotel had been recently renovated. She said that it certainly wasn’t there in 2006, as best as she could recollect.

Another improvement since 2006, according to Moni, was the expansion and renovation of the museum (Musee de la Regence) on the first floor and in the basement of the Palace (Place de lEglise). This is where the Ensisheim Meteorite is presently on display. There were two other display cases of meteorites that were on temporary display, just for the Show. The rest of the museum had great natural history displays with professionally prepared exhibits depicting Ensisheim’s Archeology, History, and Potash Industry. I found this museum to be a convenient and very good reference point for all of the other attractions in the Ensisheim-Alsace area. 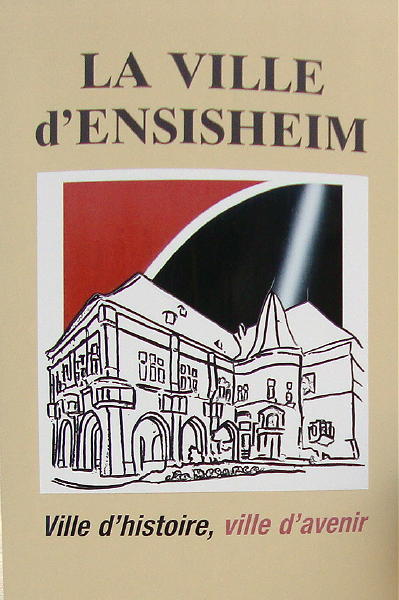 “A village with history, a town with a future!“.
(You can click on this link in order to get an ENGLISH translation for this website.)

Plan well your visit to Ensisheim – Meteorite 2012, and give adequate time to view all of the many great museums and historical sites. (You can click on the above image in order to ENLARGE.)

Time went by quickly and I didn’t get to photograph every meteorite that I found interesting at the Show. But that wasn’t my main objective. I figured that would be done by others anyway, and probably done so even more professionally, especially by the owners of those special meteorites. It was my hope that I could give a different perspective on this “Exposition”. I hope that my personal view of this event (in the context of a side-trip as part of a 2-week long European vacation) will give the reader another insight into this unique international gathering and of the town of Ensisheim, itself.

I am looking forward to the next time that we can return to Ensisheim.

The following REFERENCES are links to image galleries taken by individuals who attended, or were vendors, at the 2011 “Ensisheim Meteoriten Show”:

Click here to go to “Bob’s Findings Article for July 2011 – Gallery of Images” to see more images from Ensisheim Meteorite 2011.

To go back to the top of this page, click on the word “REFERENCES:” for the list of links pertaining to the 2011 Ensisheim Meteorite Show.

Bob is a retired aerospace engineer living in Southern California, and has been recovering meteorites from the Southwest U.S. Deserts since 1995.
PrevEnsisheim 2011
Unclassified MeteoritesNext