Dubrovnik: A Lumberjack Meteorite from the land of Oak Forests 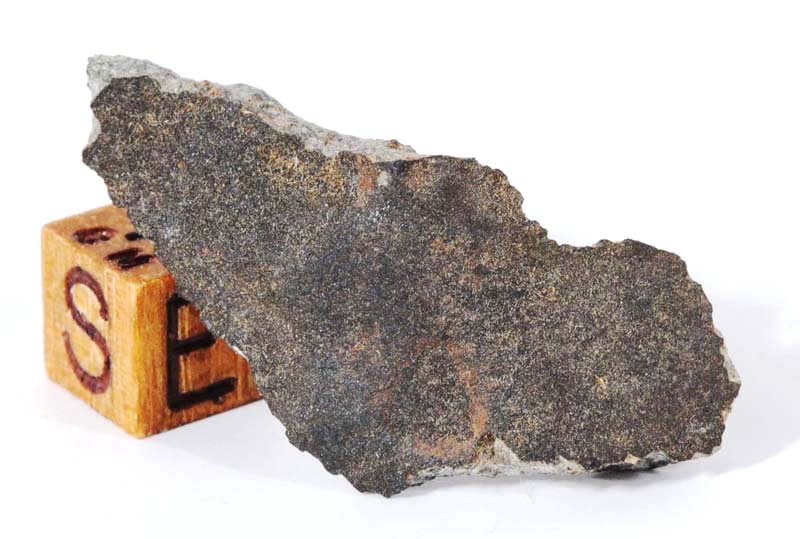 Until most of the trees were cut down and used to build ships, the city of Dubrovnik was not only surrounded by ancient fortified walls, but also surrounded by trees. Even the name Dubrovnik is the Proto-Slavic word for oak forests. Yet there had to be at least one tree still standing February 20, 1951 when an L3-6 polymict brecciated chondrite fell from space at about 2:00 in the afternoon because it hit a tree. The single 1.9kg stone was recovered after burying itself “several feet” in the ground.

According to Yokoyama and others, “Meteorites of regolith breccia preserve the records of formation and evolution of surface material on the asteroids. With longer residence time, the surface material changes its textural and mineralogical properties, so called “space weathering”, mainly due to cosmic dust bombardment and solar-wind implantation.

In addition, cosmogenic nuclides are produced via spallation reactions between in-coming cosmic rays and the surface material. Therefore, it is expected that the meteorites that have experienced heavier space weathering contain higher concentrations of implanted solar winds and cosmogenic nuclides.” 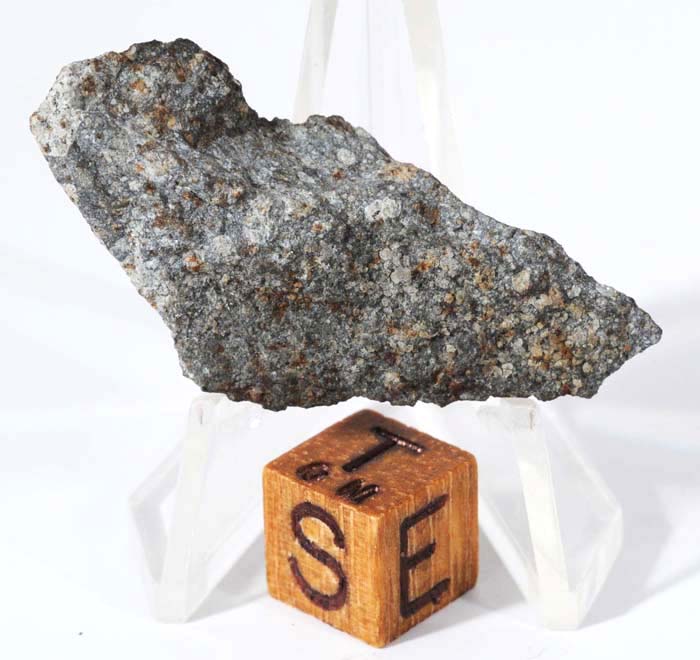 Croatia claims only four meteorites recovered from within its borders. All are falls, but in an interesting twist of synchronicity, exactly 200 years after the first known Croatian meteorite named Hraschina fell, the most recent Croatian meteorite fell and christened Dubrovnik.
Immediately preceding the Dubrovnik meteorite’s arrival to earth, “a noise like a thunderclap was heard.” I can only imagine the wondrous sound the compression waves made as they roiled around inside the walled city of Dubrovnik. However, the combination of the historical turmoil of the region and the recently deceased World War 2 might have made a meteorite fall not the first thing the citizens of the area thought of upon hearing the boom. 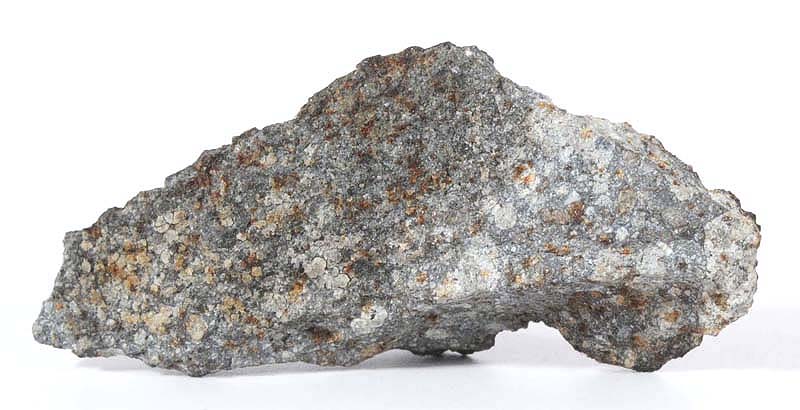 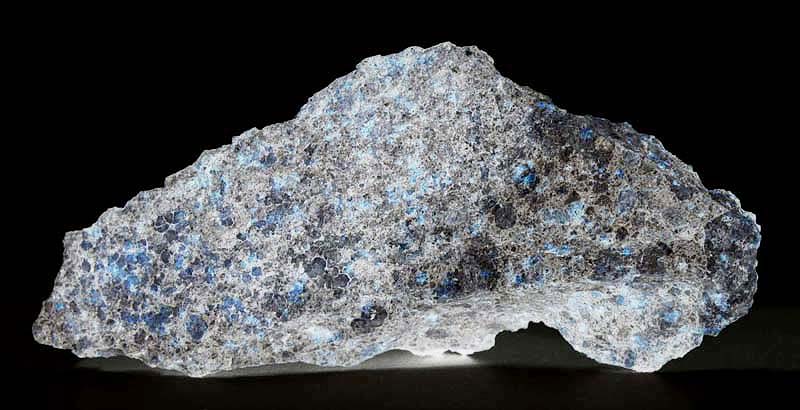 In an article titled Petrology, Mineralogy, And Noble Gas Composition Of The Dubrovnik L Chondrite Breccia by Yokoyama, et. al., a detailed inspection of the cosmochemistry of Dubrovnik is presented resulting in a telling story of Dubrovnik’s cosmic history. Without adding much embellishment, the story could read better than a dime store novel complete with car chases and love stories. Enough talk. Here’s the text…
“Based on the results of a series of analysis, we infer the formation and evolution history of the surface of Dubrovnik parent asteroid. First, the whites formed in the interior of the parent body during prolonged thermal metamorphism at around 900. Then a large impact destroyed the parent body which excavated the deeper-seated white to the asteroid surface and, at the same time, might have disturbed the composition of Fe-Ni metals due to impact heating.

The dark material was produced with time on the surface by space weathering. The whites and the dark were mixed due to repeated impacts. Mg-rich pyroxene in the dark would have incorporated from least metamorphosed portions of the surface, or as in-coming meteoroids during the impact-induced mixing processes, and the black melt pocket was also produced due to local shock heating. During impacts, the dark and the whites consolidated together to form a chondritic regolith breccia. After consolidation, there is no heating enough to degas noble gases.”

The collection distribution of the Dubrovnik according to the Catalogue of Meteorites provides a different picture on the small total known weight of this locality. Of the 1900 grams recovered from the fall, 1790 grams are in the Dubrovnik Museum in the form of a single main mass. After the 204g in the Vienna Museum (ignoring the discrepancy in TKW), it goes downhill rapidly from there. 39.3g are listed as in the AMNH in New York; 23.5g in the Field Museum in Chicago; another 23.5g in London; 22g in the collection of the University of New Mexico; five grams in Moscow; and 3.8g in the DuPont collection.

Although many of the specimens of Dubrovnik listed in other collections are small, I suspect that many samples have a sizable helping of crust just as mine does. 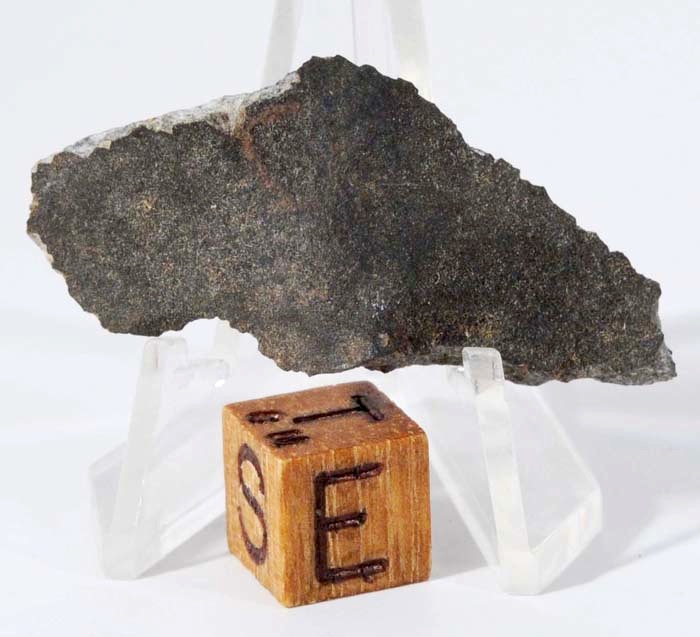 A number of years ago, as I was negotiating an exchange with another collector, a Dubrovnik blip started moving on the radar screen. Although not terribly old, this youngster’s earth age was easily overshadowed by the desirable collection qualities including the low total weight and low distribution of Dubrovnik, the interesting fall location and circumstances, the museum and collection documentation, the excellent crust, and, of course, its coveted classification. 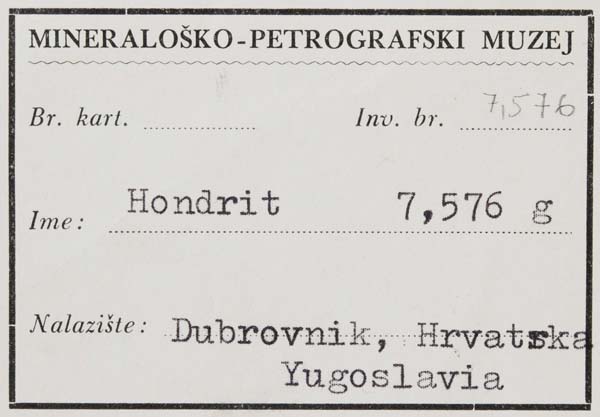 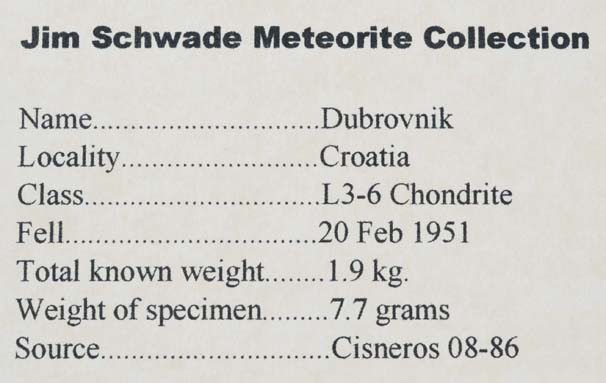 The specimen label that came with this piece Dubrovnik is from the Natural History Museum in Zagreb, Croatia. Back in 1989 I spent some time in Zagreb. What a wonderful place filled with kind people. I have not been back since the Croatian War of Independence, but that region of the world has moved back up on my list of places to visit again.

And when I again visit Croatia, I’ll be sure and stop by to say hello to the main mass of Dubrovnik.

Dr. Martin Horejsi is a Professor of Instructional Technology and Science Education at The University of Montana, Missoula. A long-time meteorite collector and writer, before publishing his column "The Accretion Desk" in The Meteorite Times, he contributed often and wrote the column "From The Strewnfields" in Meteorite Magazine. Horejsi is also the Lead Technology Reviewer for The National Science Teaching Association, and just celebrated his 22th year working with NASA and the JPL in education and public outreach (EPO), and is a NASA Solar System Ambassador. Horejsi specializes in the collection and study of historic witnessed fall meteorites with the older, smaller, and rarer the better. Although his meteorite collection once numbered over a thousand pieces with near that many different locations, several large trades and sales and trades have streamlined the collection to about 250 important locations with all but 10 being witnessed falls. Many of the significant specimens in Horejsi's collection are historic witnessed falls that once occupied prominence in the meteorite collections of Robert A. Haag, James Schwade, and Michael Farmer. Other important specimens were acquired through institutional trades including those from The Smithsonian Institution, Arizona State University, and other universities. Horejsi was awarded the Harvey (Nininger) Award in Tucson in 2006, The Brotherhood of Guardians of the Ensisheim Meteorite in 2011, a JPL Inspiration Person, on the JPL STARDUST Team that was awarded the Smithsonian Air and Space Museum Annual Trophy in 2008, and former board member of the International Meteorite Collectors Association, and the Northwest Council for Computers in Education.
PrevTucson Show 2011 Recap
Indochinite 69.7 GramsNext