“Then came a flash so brilliant that you could not see anything and it lit up everything bright as day. Then came the explosion after the light faded out, which shook the house with such force that the windows and dishes rattled.”

There are many shocking things about the fall of the Peace River meteorite including just how many witnesses were awake at 4:35 AM on a cold Sunday morning. Mr. Grigoleit’s account quoted above is one of dozens that when combined shrank the witnessed fall area from 4000 square miles to about 100 square miles. From there, the elliptical strewn field was further refined resulting in a quite manageable 5.5 by 3.5 mile search area.

So less than a month after the March 31 fall, and after the snow melted, the first piece of the Peace River meteorite was found, an 8kg fragment that John Westgate pulled from a field a mere two days into the serious search after the snow melted and the floodwaters subsided. A total of seven pieces of Peace River were reported found weighing from 360 grams to 16.6 kilos for a total recovered weight of over 45 kilograms. There were also many so-called souvenir specimens collected but not recorded or weighed.

Solid fieldwork led to the location of the Peace River fragments now in captivity, but the first hurdle in the science of the Peace River meteorite was convincing those in academia that such an event actually took place and was worthy of the 300 mile drive. But like L’Aigle, the eyewitness testimony was consistant and overwhelming making a six-hour one-way trip to the fall area worth the time of university researchers. Arriving on site, the interviews began. In essence, each witness was taken to the exact spot where they were when Peace River fell. The witnesses were given a stick to point at whatever they remember seeing. The directions and angles were recorded and measured using a Brunton compass.

On a side note here, although many consider Brunton compasses to be from an American company, it was actually D.W. Brunton who commissioned a watchmaker in Denver, Colorado to build Brunton’s invention, a Pocket Transit Compass. Brunton himself was a Canadian-born geologist and mining engineer.

Some of the eyewitness testimony collected and documented by R. E. Folinsbee and L. A. Bayrock in their highly detailed account of the fall included:

“…First noticed when ground and interior of car lit up like sheet lighting.”
-R.C.M.P. Constable Lowe

Saw an orange fireball the size of several full moons descending at a very steep angle …exploding…leaving behind a large number of bright fragments that fell to the ground.

Saw the sky brighten and a reddish bolide about one-third the size of a full moon descending.

Saw a flash in the sky and then a yellow to reddish fireball about one-tenth the size of the full moon at the same time he heard a sound rumbling sound.

Saw the whole sky brighten up and a fireball of very deep red color about “one foot” in diameter.

Saw a bolide travel across path of his car west to east. The bolide was small at first and became larger and larger until at least the size of the full moon at which time it exploded. Noted that the explosion took place 15-20 miles away.

And on and on.

Once the general area of the fall was identified, a Cessna 180 airplane was used to search for fragments. However the snow cover prevented finding anything. A ground search at that time was equally ineffective. And as anyone around farmland knows, when the snow melts, the fields flood. So although a mild search proceeded with searchers wearing wadding boots it too was unfruitful. Even worse, chert pebbles are a common rock in the area and they look remarkably like meteorites and were collected in droves. And finally, adding insult to injury or rather the other way around, the day before the first fragment was found it was reported that “all our searchers acquired was a severe sunburn.”

Much was learned back when Folinsbee searched the Bruderhiem, Canada fall in 1960 (discussed here in the Accretion Desk back in 2011). So building on that knowledge and lessons-learned including the fact that even large meteorite fragments can be easily overlooked in a cultivated field unless a highly systematic search is undertaken.

One particular fragment was most interesting not because it was a meteorite but rather because it was not a “meateorite” (this author’s choice of spelling). Its thought a coyote was disappointed the stone was not a sharp-tailed grouse or other tasty beast. In disgust after sneaking up on the rock, the canine defecated on the fragment. That story reminds me of the dog that urinated on a piece of Lost City before it was recovered. Perhaps there is a new collecting genre for such localities similar to “Hammer Stones.” If such a category is opened, may I suggest the name “Meteortoilite.”

Three followup searches were made, one each in June, July, and August of the same year. Folinsbee and Bayrock outlined two facts about the functional search for Peace River meteorite specimens including:

-Its possible to accurately “Pinpoint” a fall area even when the closest witness is 20 miles away.

-A systematic reporting system is necessary to collect the diversity of witness information. Also use the media and “on-the-spot education in meteoritics.” (in the article Nininger was given a nod for that tip) 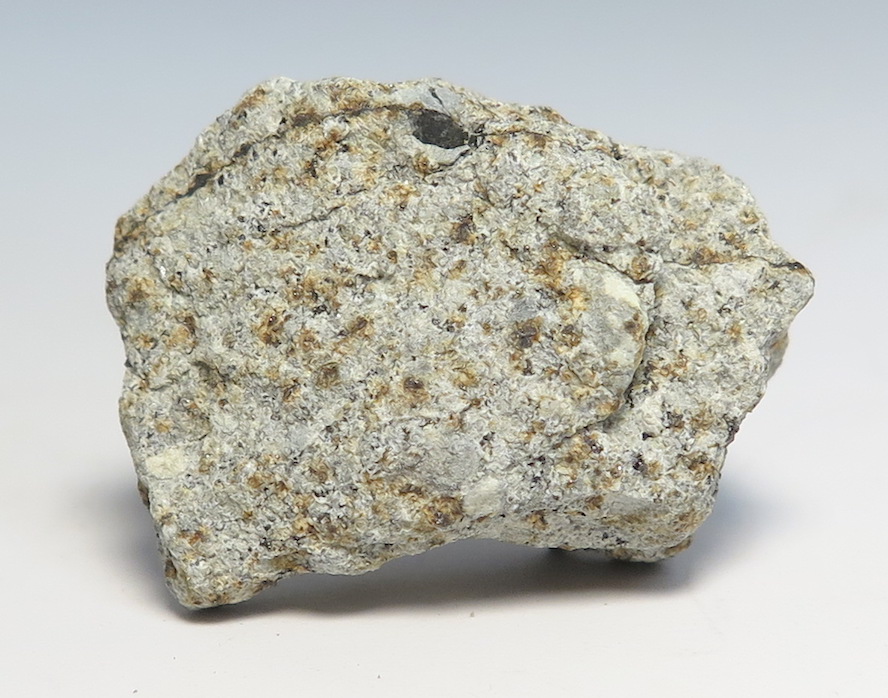 Robert Folinsbee died in 2008, but his rich scientific career lives on as does his memory with asteroid (187679) Folinsbee named in his honor.

Like all witnessed meteorite falls Peace River is filled with excitement and chase. But dare I call Peace River historic? Well, considering that it fell in the year I was born, I’d say Peace River, while a wonderful and highly collectable L6 chondrite with a rich documented history, it is far from historical.

Dr. Martin Horejsi is a Professor of Instructional Technology and Science Education at The University of Montana, Missoula. A long-time meteorite collector and writer, before publishing his column "The Accretion Desk" in The Meteorite Times, he contributed often and wrote the column "From The Strewnfields" in Meteorite Magazine. Horejsi is also the Lead Technology Reviewer for The National Science Teaching Association, and just celebrated his 22th year working with NASA and the JPL in education and public outreach (EPO), and is a NASA Solar System Ambassador. Horejsi specializes in the collection and study of historic witnessed fall meteorites with the older, smaller, and rarer the better. Although his meteorite collection once numbered over a thousand pieces with near that many different locations, several large trades and sales and trades have streamlined the collection to about 250 important locations with all but 10 being witnessed falls. Many of the significant specimens in Horejsi's collection are historic witnessed falls that once occupied prominence in the meteorite collections of Robert A. Haag, James Schwade, and Michael Farmer. Other important specimens were acquired through institutional trades including those from The Smithsonian Institution, Arizona State University, and other universities. Horejsi was awarded the Harvey (Nininger) Award in Tucson in 2006, The Brotherhood of Guardians of the Ensisheim Meteorite in 2011, a JPL Inspiration Person, on the JPL STARDUST Team that was awarded the Smithsonian Air and Space Museum Annual Trophy in 2008, and former board member of the International Meteorite Collectors Association, and the Northwest Council for Computers in Education.
PrevMysteries Solved at the Saw
Canyon Diablo SpheroidsNext