Collecting Near the Source

Collecting Near the Source

Seventh in a series of introductory topics for the beginning meteorite collector!

It stands to reason that the closer to the finder a meteorite can be purchased, the better will be the price.  In theory, this is a valid assumption as long as the statement is qualified.  As example, many fine meteorites are coming from hot desert regions at this time, including Morocco/Algeria, and the Dag al Gani plateau, among others.  We are beginning to see some of the local traders making themselves known via auction sites and e-mail lists.  Once your name is known, as a collector, on a meteorite list, unsolicited offers May come to you.  Initially, these need to be looked at with caution.  It would be folly to send money to an unknown source in an unknown country for unknown and unauthenticated merchandise.  In such instances there needs to be some homework on your part to become acquainted with said source.  Is the person known to others?  Is he/she reliable?  What is the quality of the offering?  Will the seller offer guarantees and stand behind the sale?  If these questions are answered positively, then it May be in order to give it a try with a small purchase to see what happens.  The source individual will probably be happy to offer a selection or May ask the inquirer to “make an offer”.  You will now be confronted with more choices.  Is the material classified or unclassified?  If it is unclassified you most likely will have the opportunity to buy an “orphan” that May never become classified, although it May be a nice meteorite. Under these circumstances, it should be possible to obtain a nice specimen at a fraction of what one would pay, otherwise.   If it is classified, you need to realize that in all likelihood the specific individual you are interested in probably is not classified, but that one of the other pieces from the same presumed strewnfield was the classified meteorite.  In other words, if x number of similar pieces are found in a strewnfield and yours looks like the others, one member of which has been classified, is yours, in fact, paired (from the same fall) even though it appears to be?  Probably it will be, but the only way to have a 100% positive classification of meteorites which are found under such unregulated conditions is to have had the specific individual you have uniquely classified.  This May be a fine point, but it is an important one.  This is where the professional meteorite dealer comes in.  If, in fact, he/she purchases from the source, a large (Maybe rare) individual, has it classified, and then sells pieces of that very same rock, you can be sure what you have.  On downside, the price May now have been escalated by many factors of ten.  So, it is a bit of both a gamble and a trade off.  Such dealing, with a source can, however, be a positive experience and an opportunity for the collector to gain knowledge and expertise in the process of acquisition, which is all part of the collecting process.

Not so brave?  Then try a trade show.  The reader is undoubtedly aware of the several trade shows that are held annually.  Two of the most popular are those held in Tucson (first part of each February)  and in Denver.  I can only speak of the Tucson Gem and Mineral show, as I have not been to the Denver show although I hear many good things about it.  I have, however, attended the Tucson show since the mid-1980’s and seen it grow in size and become more interesting each year.  In earlier years, it was only a Gem and Mineral show.  Slowly, meteorites began to appear, then more and more meteorite dealers…a mix along with rock, mineral and gem sellers to make attendance very interesting for not only meteorites but everything else from lapidary equipment (discount offers if you want to buy saws, cases, plastic bags or other equipment and supplies for your own use) to exotic hand-carved wooden stands and psychedelically lighted bases for your specimens.

Aided by show-maps showing localities of all the wares, one ferrets out the many dealers who are scattered among many hotels (their sleeping rooms now transformed into mini-showrooms), tents, otherwise vacant lots, and curbside, some offering good prices and others, not so good prices.  As always, it is mandatory that the collector spend time shopping and comparing both quality and price before buying anything from anyone. But having done that, there are good deals. And some good deals can be bargained to make them even better (especially on rainy evenings)  At the trade show you are one step closer to the source than buying from a website or retail catalog.

A primary advantage of buying at a trade show is that you have the opportunity of finding new material that is appearing for the first time and you can select the very best pieces among many. 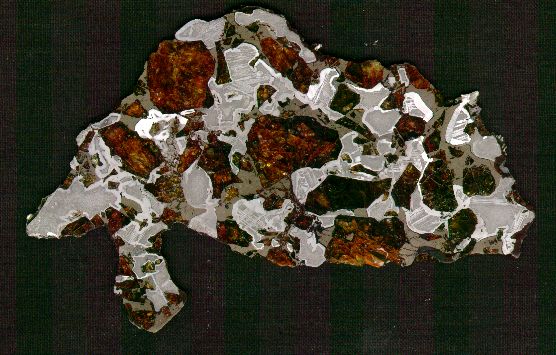 As an example, the picture shown above is of a Glorieta Mountain (PAL) slice, cut and nitric-etched by Marlin Cilz of the Montana Meteorite Laboratory) which I purchased from Steve Schoner at the Tucson Show in 2001.  Steve had just made available slices from his recent 20 kg. find at Glorieta, NM.  (Meteorite, V. 6, No. 4, Nov. 2000).  I was immediately attracted to this piece as I viewed the many available specimens in the display cases in Darryl Pitt’s (www.macovich.com) hotel showroom.  While not the largest, it had one of the most interesting shapes and was by far the nicest in my price range.  It remains a centerpiece in my museum collection on display at Mt. San Antonio College.

Not to be ignored are the meteorite auctions.  At Tucson, there are two regularly scheduled as annual highlights of the show.  One is, again, Darryl Pitt’s auction, set up on a Sunday morning on the lawn next to the pool (a very relaxed setting) at the Inns Suites Hotel.  This is a very formal auction, and bidding is done in a most serious manner.  Most pieces are rare or exotic.  This is an excellent opportunity to find unusual or one of a kind pieces.

The second is that held by Michael Blood.  This auction is held in a rented hall.  A bar is maintained at the rear of the room.  (This is offered, of course, for the collector to avoid experiencing dehydration from the excitement generated during auctioning.  Michael’s auction allows anyone to submit meteorite related items. It is an opportunity for even small collectors to exchange inexpensive pieces.  The flavor of Michael’s auction is very different, as it is more festive (perhaps due to the rear of the room) and attendees appear to have a great deal of fun bidding against one another.  This is not to say that bidding is not taken seriously.  It is, and many good fine pieces can be won.

More and more,  trade shows are becoming not only the domain of the dealer and trader, but of the individual collector as well.  If one can afford to take a vacation and spend a weekend at such a gathering, it can be rewarding in finding valuable acquisitions for one’s collection, and in having the opportunity to make many new friends who share the same interests.

Paul is the webmaster for all of The Meteorite Exchange's websites including Meteorite Times Magazine. His fascination with all things space related began as a young boy during the Space Race. His free time is divided between meteorites, astrophotography, webmaster, and the daily operations of the ecommerce website www.meteorites-for-sale.com.
PrevETCHING IRON METEORITES (or…”The Myth of Nitric Acid”)
Tektites: Do Small Worlds Collide?Next