Greg and Mike went to Aiquile to hunt for meteorites and attempt to acquire stones from the inhabitants. Things didn’t quite work out that way…

It would take us over two weeks after the fall to fly to Bolivia due to Mike’s yearly show commitment in Japan. Just 24 hours at home after returning from the show, Mike flew to Florida to meet me. On December 8th we began our journey to South America from Miami. Our travels would take us by air to Aiquile by way of La Paz and then on to Cochabamba, then to Aiquile by private hire. With no sleep for over 30 hours of travel from home to the dusty town near the strewnfield, we were exhausted but too excited to rest. We went right to work meeting with fellow meteorite hunter, Dario Ruiz, who had been there for two weeks. He introduced us to individuals about hunting for meteorites or buying some, but our hopes were quickly dampened by the news of the town’s government putting up road blocks to deny access to the strewnfield. It turns out that the officials were confiscating stones from the Quechua finders which put them in a panic and afraid to talk to outsiders. Things quickly became complicated.

We realized we were not going to be able to hunt for stones ourselves without the threat of arrest, or far worse, physical harm from protective villagers we were told may use force to stop outsiders from hunting. Knowing this, we immediately went to ‘Plan B’ and were granted secret meetings with owners of pieces from the fall. To our thrill and amazement, we were able to see several stones ranging from small broken fragments to large kilo-sized pieces. Throughout the 48-hours we were on site we were told of several large pieces included a 50-kilo ‘Puzzle Stone’ which we believe to be just rumor as is consistent with most falls.

On our second day we had an early start with a scheduled meeting to see some stones, but being on ‘Bolivia time’ we sat for several hours waiting, waiting and waiting some more. To keep us from leaving and going to other contacts, our new friend entertained us with some guitar play dressed in his caballero ranch clothing made of javelina, lama and other durable animal skins. Aiquile is known as the ‘Capitol of Charango’ (guitar) where the guitar is manufactured. It was nice to enjoy this flavor of music high in the mountain village.

Noon was soon upon us with nobody bearing stones for us to consider so we walked down the street for lunch and chose one of a few street vendors offering potatoes and sausage. We ventured to the local market and town square for a little tourism while we were there. The meal was very tasty and the sightseeing was nice but we were eager to get back to work.

Approaching our meeting place to see the stones we noticed two out-of-place characters on brand new mountain bikes looking our way and pointing a cell phone towards our direction and acting like tourists. We knew immediately they must be government officials with their shiny bikes, mirror sunglasses and new clothing. And we thought WE stood out in the crowd! Most Quechua don’t own bicycles in this town, and if they did they would be very old and worn out. Entering the hotel meeting place we were led to a wall where we were informed that a notice was hastily taped on the wall in the darkness of night. It was a new ‘law’, or heavy suggestion as we surmised, that encouraged locals to hand over their finds and forbid hunting for the meteorite or the sale of them. This new ‘Declaration 69’ would be voted on in 60 days at which time it would either become official law or be struck down.

Not wanting to tempt fate and be accused of stealing meteorites or be set up by the ‘tourists’ on the mountain bikes, we decided to cut our trip short and bug out early. We didn’t want to alert anyone of our revised plans so we made new appointments for later that day and the next morning. After making arrangements for an inconspicuous ‘escape’ we met with our driver who quickly loaded our small amount of luggage and he made his way through back alleys away from prying eyes. He stopped by an out of town gas station but did not pull in like normal but chose to park behind a large bush for concealment from the cameras at these locations. We would later learn that some cars are stolen from Chile and utilized in small villages in Bolivia without proper plates or registration after the right people are paid off. After filling the tank from a gas can we were easily permitted to travel an old Quechua trail. The trail was a handmade cobblestone road that threaded alongside treacherous mountains with hundreds of hairpin turns without guardrails and lined with 1000-foot drop-offs. Many memorial markers lined the path indicating where many souls met a terrifying death.

After six hours of a white knuckle and frightening ride utilizing five different vehicles, either for evasion from possible followers meaning to do us harm or because of the ‘stolen car’ issue, we finally made it to safety in Cochabamba. During our travels on the ‘Highway from Hell’, as we called it, we received word of meteorites that were in Cochabamba that we could possibly acquire.

We arrived at the pre-determined location and were escorted to a dimly lit corridor in a downtown room without furniture. After much negotiation in Spanish between Mike and the owner, a few pieces were purchased. The large stone was not to be had as the owner wanted to what amounted to the cost of a large ranch. We left content with the few pieces we managed to get and took two different taxis to a hotel we booked online while in route to the meeting. We took no chances of being set up or followed. Risk of false imprisonment in South America is high so we had to constantly be on guard and switch plans on the spot. ‘Head on a swivel’ was the motto here. We managed to get a 2-hour power nap after changing our itinerary back to the U.S. before we had to be at the airport to fly to La Paz.

Upon checking into yet another spur-of-the-moment hotel, we had a few hours for some sightseeing around the neighborhood before getting rest before yet another 3:00 a.m. wake up call to catch a flight.

After departing La Paz, with a quick stop in Santa Cruz, we flew over the jungles of Brazil, Colombia and the northern Caribbean coast over Barranquilla. Next was a narrow of emerald-colored sea that led us over Jamaica and through central Cuba before delivering us to Miami.

While most of the meteorites recovered from this fall were confiscated by the municipal government, some of those will be put on public display in the local museum. This means that of the very few that were legally obtained before any overnight laws potentially go into effect, very little will be available to the collecting community. While we were prepared and had to bug out early due to a challenging and fluid situation, we overcame the difficulties and returned home safely. The Bolivia meteorite adventure was a quick thrill ride composed of; Excitement, Frustration, Disappointment, Danger, Reward and most importantly – A trip we will not soon forget! 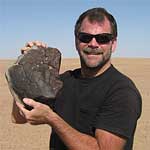