Are you sure Tektites are Meteorite Impact glasses?

…And when your children shall ask “what meaneth these stones?” ye shall answer that this marks a place where the heavens touched the earth. 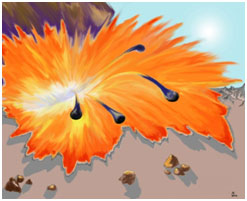 Touched indeed. With typical encounter velocities in the range of 15 to 25 km per second, an onrushing fragment of an iron asteroid is a freight train with a lot of kinetic energy. When it stops abruptly against an immovable object like planet earth, a great deal of that kinetic energy flashes instantaneously into thermal energy. Large volumes of target rock can be subjected to temperatures in excess of 2000 degrees C, well above the melting point for common earth materials.

Depending on the specific character of the impactor (size, density, encounter speed) and the target rock, a range of impact products may form. At the lower threshold for significant glass formation, shattered target rock fragments in a glassy matrix form a crude paste hardly recognizable as glass (Monturaqui). At the other extreme, Libyan Desert glass is the highest purity natural glass known on earth.

“Impactite” is the broadest designation for anything and everything generated by hypervelocity impact events. It has been common usage to let the “impact glass” term be a general umbrella for all kinds of glassy impact products. Tektites are often viewed as a subset of impact glass, but I will here argue that there is a profound distinction between proximal (near) and distal (far) glasses, the tektites.

One of the great joys of a diverse collection of this sort arises when comparative sets are assembled. This is a fine example, inviting a reassessment of all we may have believed before seeing the bigger story.

In this image, the front row shows a selection of impact glasses found in either the immediate vicinity of an impact crater or thought to be proximal. The back row includes examples of all of the five generally accepted tektite strewn fields known. From left to right, I have selected a sampling of proximal glasses to show the range in character associated with a range of impact energies, and a corresponding increase in glass quality and fluidity. 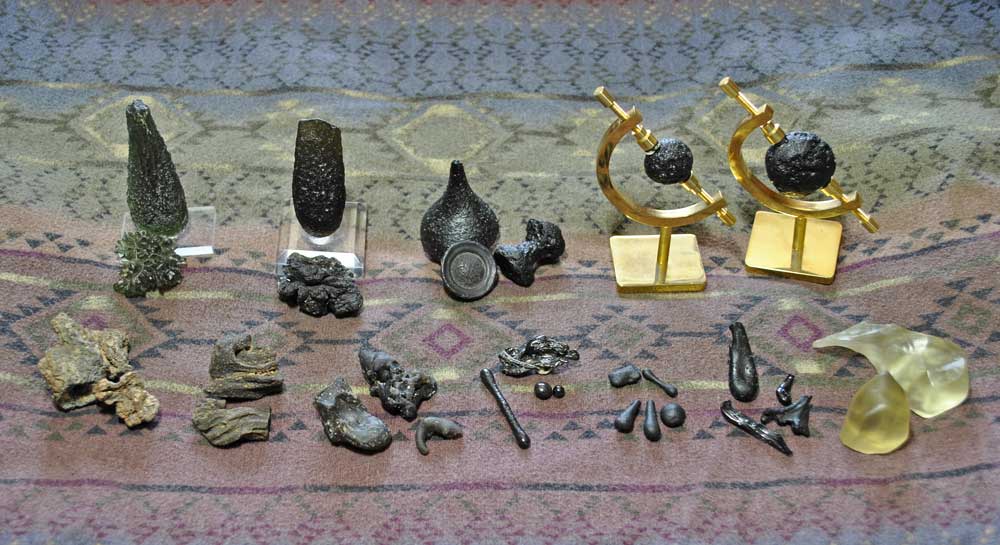 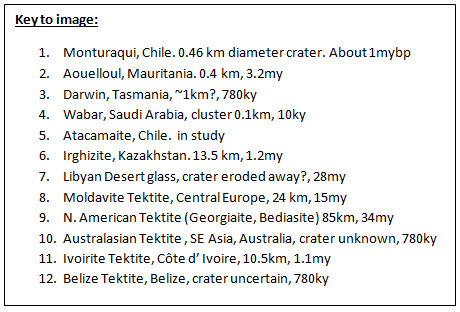 Impact glasses (or their alteration products) are known from hundreds of sites spanning billions of years of earth history. In the world of significant impacts, proximal glasses (meaning those found within or very near an impact crater) are probably universal (as they should be given the energy releases involved in such events).

But strangely, we presently know of only five tektite (or four?, more to follow,) strewn fields on earth. Where we can associate an impact feature or source region with a tektite strewn field, they are separated by hundreds to thousands of kilometers. All accepted tektites show evidence of aerodynamic flight modification (excepting Muong Nongs of course. More on that below.) All impact glasses described in this article are found within or in the immediate vicinity of earth impact features (if the source is known).

Something is different. Tektites and proximal impact glasses are not on the same continuum.
The Key table for the image above offers some insights: in general, the tektite events are associated with impacts 1 to 2 orders of magnitude larger than the proximal glass events. Available data suggest that the Australasian, Darwin, and Belize strewn fields are about (and might well be precisely) coeval. There is a strong possibility that this event involved multiple near-simultaneous impacts, suggesting a Shoemaker-Levy-like train of bolides.

Faithful readers will recall that I channel the voice of Muong Nongs begging me to give credit to dozens of airburst fireballs in SE Asia, essentially one or more for every concentration of Muong Nongs. (Apologies to any who don’t know what I am talking about. Please see the sidebar and check in the column archives. Muong Nongs hold the answer).

In the case of the Australasians, my whole story hinges on a friable , probably cometary, bolide that shattered high in the atmosphere, shot-gunning southeast Asia, and believably, sending a few big chunks hurtling to widely scattered destinations elsewhere on earth (Belize, Darwin).

If you will accept this argument, the number of recognized and distinct tektite-producing events is reduced to only four: the 34my Chesapeake Bay North American event, the 15 my Central European event, the 1.1my Ivoirite event, and the 780,000 year Australasian/Belize/Darwin event. (Do recall that glass is geologically unstable. After 40 or 50 my, glass will be represented by alteration clays that may neither endure nor be recognized, so our deep time record of impact glass is limited).

I contend that tektites form when a structurally weak body explodes high in earth’s sky and produces a mushrooming fireball that can blast into near space, perhaps even creating an evanescent hole in the atmosphere. Below, it vacuums the face of the earth with buzzing serpentine tornado fingers licking electrically, removing all surficial materials (the recognized chemical stuff of tektites) and drawing them into the heart of the sun-like impact energy. Tektites took form suspended in such chaos. There is no requirement for a crater below.

Similarly, even those events with seemingly coeval source craters may well have had directly associated aerial bursts that were actually responsible for the tektites, not the craters per se. The craters we can see tell us something about a major bolide in the event, but it only hints at simultaneous atmospheric bursts that we imagine were probable or possible at that same time. Maybe the big ones of this sort arrive in clustered fragments. Some break up way high, others punch through to the ground. When an impactor strikes earth, we get impact glasses. When a structurally weaker bolide shatters high in the atmosphere, massive aerial bursts can result. Muong Nong-type tektites mark the locations of such atmospheric impacts. These are fundamentally different from earth impacts. Splashform tektites splashed only against the air. How they got where they went is a story for another time.

If you like the challenge of getting hold of a slippery eel or a greased pig, try tektites. Suppose everything I have surmised is correct (a virtual Copernican revolution in itself) and we now have uncontroversial oscillating blobs of tektite glass flinging through the turbulence of an unthinkable explosion of aerial-burst energy, —supposing that is all correct, it is not over. We still need to get these tektites a 2000 km ride to shower farther down range than an atom bomb could ballistically propel a pea! Maybe a subject for next time. This is the fun of tektites. I seem to move forward, but I find no end.

(If you will review the archives of this column, you will find more detailed descriptions of each of the dozen impact glasses and tektites mentioned in this article. More discussion regarding the sanctity of Muong Nong-type tektites awaits the scholar there as well.)

Norm Lehrman is a recently retired exploration geologist with over 45 years experience. His career involved fieldwork in over 35 countries on every continent except Antarctica. While stationed in Australia, Norm and his wife, Cookie, became interested in collecting Australites, which ultimately led to a generalized passion for tektites, impactites, meteorites and related materials. In 1999 they founded the Tektite Source business (www.TektiteSource.com) which has evolved into one of the world's premier providers of tektite and impactite specimens. Norm has retired to a ranch near Spokane, Washington, where they continue to serve tektite aficionados worldwide.
PrevTHE FIRE OF THE NATIONAL MUSEUM OF RIO DE JANEIRO
NWA 3118 CV3Next