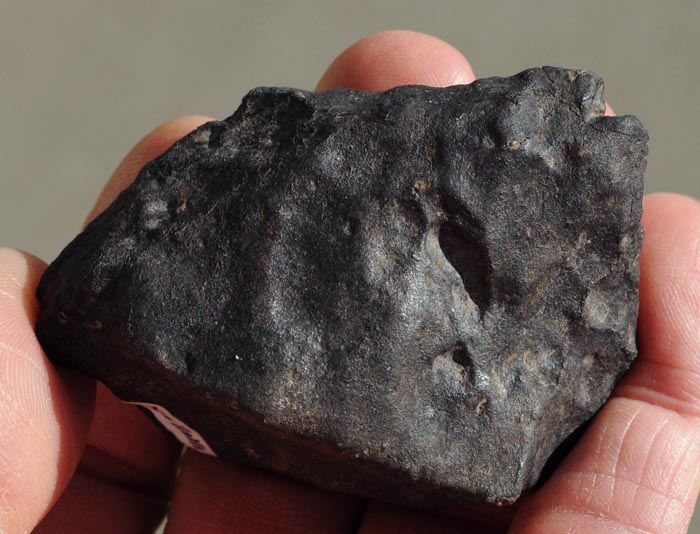 According to the Meteoritical Bulletin entry for New Halfa, “The fall occurred near village No. 9, 15 km NE of New Halfa and was witnessed by Khalil Mohamed Khalil and Ibrahim Hamed from this village.”

New Halfa is classified as an L4, S3 chondrite. Not the most exciting class to fall from the sky, but a little better than an L6 in my book.

It was reported that “seven larger specimens, ranging from 5 kg to 100 g, and many small ones were collected by the Geological Research Authority of the Sudan.” What I find important here is that my individual of New Halfa breaks the minimum 100g threshold affording it special status as one of the lucky seven specimens considered large.

Now mine might be number seven of seven, a mere fiftieth of the largest mass, but its size qualified it as a standout among the many smaller stones. 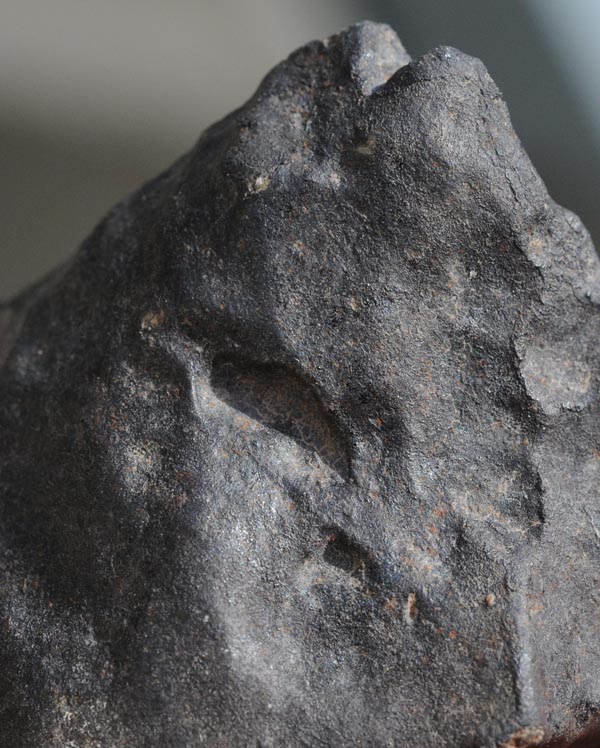 The distribution of the 12kg of recovered New Halfa material is, according the Catalogue of Meteorites, is very poorly distributed. It seems that 12kg of the 12kg, including the main mass (imagine that?) resides in the Geological Research Authority of the Sudan, while another 290 grams lives in the Bartoschewitz collection. Humboldt University finishes up the list with its 8.4g specimen. No specimen is listed as part of the collection of the Natural History Museum in London, nor does it appear that any institution in the United States holds an entry for New Halfa in their collection catalog according to the Catalogue.

I do know that small slices and fragments of New Halfa are circulating in the private collecting community, but until I hear otherwise, I’ll assume that my piece is the third largest collection entry in the world. Of course the GRA of Sudan could make a big trade and depending on cut-loss, 100 other collectors could jump ahead of me in size ranking. 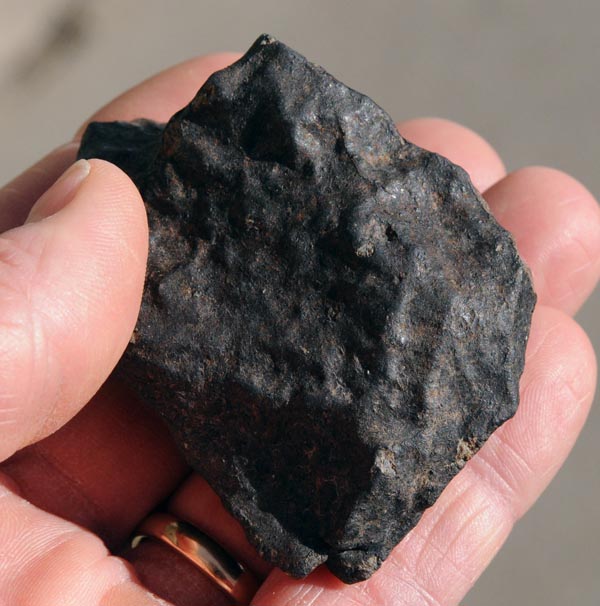 While an L4 fall not even two decades old doesn’t exactly peg the excitement meter, this complete individual, at 127 grams, is one of the magic seven noted in both the Meteoritical Bulletin and the Catalogue of Meteorites. For me, that was enough to make it worth considering.

Having the referenced seven reference point helps when there is only one individual available and the dollars are flying. In the case of New Halfa, it was a purchase from the Michael Farmer collection when he sold some of his best pieces with the intent of purchasing some land.

To survive the feeding frenzy of a collection deselection, any serious collector must be able to make snap-decisions with a clear focus about the importance of a piece to his or her own collection. For me with New Halfa, it was the rarity of the specimen in the overall story of its fall, that it was a completely crusted complete individual, it had nice presentation form, and something that is always a bonus, the price was right. Steep, but right. 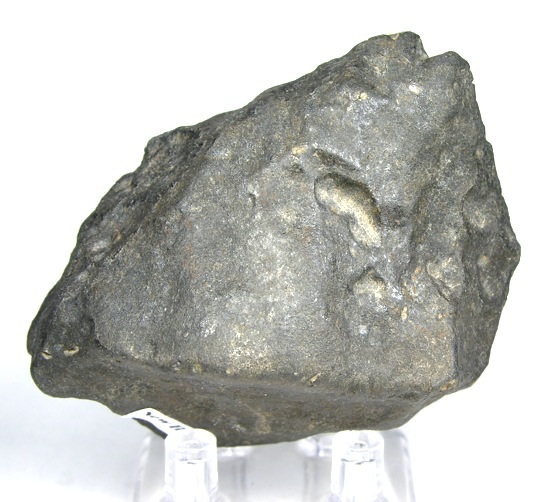 In an article by Y. A. Abdu from the Department of Earth Sciences at Uppsala University in Uppsala, Sweden, New Halfa makes a brief foray into the scientific scene. Here is an excerpt from the abstract that appeared in the proceedings of the 67th Annual Meteoritical Society Meeting in 2004, but if you want the full text, click here: http://www.lpi.usra.edu/meetings/metsoc2004/pdf/5033.pdf

A New Method For The Extraction Of The Metal Particles Of Ordinary Chondrites: Application To The Al Kidirate (H6) And New Halfa (L4) Meteorites.

Recently, we have developed a simple magnetic separation method for the extraction of the metal particles of ordinary chondrites, then dissolved kamacite in conc. HCl to obtain taenite-enriched samples. The whole rock powdered sample is first subjected to magnetic separation in acetone using a hand magnet.

The magnetic fraction is then taken and submitted to further grinding and magnetic separation in acetone several times in order to purify the metal particles from silicates and troilite. The Mössbauer spectra of the metal particles extracted from the Al Kidirate (H6) and New Halfa (L4) chondrites, using the above method, contain kamacite (the dominant phase) and small amounts of taenite and antitaenite.

The presence of abundant disordered taenite (~ 30 %) coexisting with tetrataenite (~ 29 %) in the metal particles of the New Halfa indicates that the parent body of New Halfa may have experienced shock and re-heating events, consistent with the shock stage S3 (~ 15-20 GPa) reported for this meteorite.

I guess in a nutshell, the article says that the New Halfa parentbody got itself into a bit of a wreck smashing the hell out of its taenite. And that antitaenite stuff? Sounds exciting from a quantum perspective. Converting the pressure to something more understandable, an average bicycle tire is inflated to around 60-80 pounds per square inch of air pressure. The 20 GPa the New Halfa parent body experienced is about 43,000 times more than a bike tire, somewhere in the neighborhood of three million pounds per square inch! Or in metrics, that’s about three billion kilograms per square meter! Ouch!

So as another Accretion Desk wraps up followed closely by another year, I can only smile as 2009 winds down because with each passing year, my New Halfa gets one more orbit closer to being historical.

Dr. Martin Horejsi is a Professor of Instructional Technology and Science Education at The University of Montana, Missoula. A long-time meteorite collector and writer, before publishing his column "The Accretion Desk" in The Meteorite Times, he contributed often and wrote the column "From The Strewnfields" in Meteorite Magazine. Horejsi is also the Lead Technology Reviewer for The National Science Teaching Association, and just celebrated his 22th year working with NASA and the JPL in education and public outreach (EPO), and is a NASA Solar System Ambassador. Horejsi specializes in the collection and study of historic witnessed fall meteorites with the older, smaller, and rarer the better. Although his meteorite collection once numbered over a thousand pieces with near that many different locations, several large trades and sales and trades have streamlined the collection to about 250 important locations with all but 10 being witnessed falls. Many of the significant specimens in Horejsi's collection are historic witnessed falls that once occupied prominence in the meteorite collections of Robert A. Haag, James Schwade, and Michael Farmer. Other important specimens were acquired through institutional trades including those from The Smithsonian Institution, Arizona State University, and other universities. Horejsi was awarded the Harvey (Nininger) Award in Tucson in 2006, The Brotherhood of Guardians of the Ensisheim Meteorite in 2011, a JPL Inspiration Person, on the JPL STARDUST Team that was awarded the Smithsonian Air and Space Museum Annual Trophy in 2008, and former board member of the International Meteorite Collectors Association, and the Northwest Council for Computers in Education.
Prev2009 Meteorite Vacation
Moldavite TektiteNext