Australites are a far-flung member of the c. 790, 000 year Australasian tektite event. Truly far-flung, with the best Aussie hunting grounds located 3000 to 4000 miles from the apparent ground zero area in Southeast Asia. Whatever it was, it hit hard!

In 1959, Harvey Nininger, the first man so audacious as to try (successfully) to make a living searching for meteorites, made a 3000 mile trip across the Australian outback searching for tektites. He found none. None! They bought collections along the way, but they never found a single one. Although widespread, they are not abundant. In the early years of our collecting, we considered a place where we could find one per hour a good spot. In the process of filling a bag at the rate of one per hour, about every hundred finds there will be an Australite dumbell, (often termed “peanut”). Ranging from 56.9 to 2.1 grams, these pictured below are the finest examples from a collection of around 3000 Australites. They are very special stones. 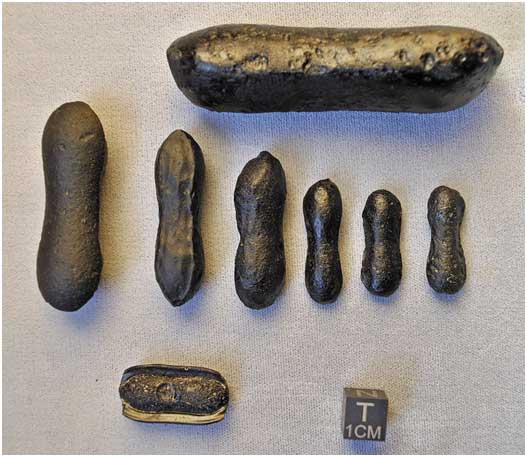 One consequence of the extremely long trajectory of the Australites was their subjection to incandescent temperatures upon atmospheric re-entry. Virtually all primary forms were modified by thermal ablation, something never seen amongst the Indochinites. A few examples are known from Java and the Philippines. With Australites such effects were nearly universal. 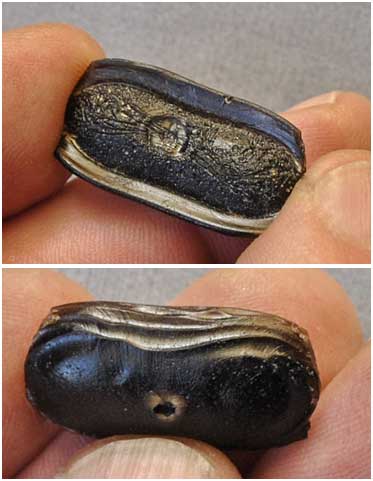 The thermal ablation effects took two forms: fusion with melt flow, and core spallation. Pictured here is a fabulous 3.2 gram trophy that illustrates the former. The second image shows the leading face, with ring waves of what was once molten glass pushing towards the back where a high-velocity equatorial vortex sculpted the melt into a classic flange. (You know how rare flanged buttons are. Guess how rare flanged dumbbells might be. ) This is not unique, but it is one of a small group of this quality in captivity. Note that fusion of the frontal surface barely breached a small internal bubble. Had this happened earlier in re-entry it likely would have caused fragmentation.

If you can appreciate fine tektites, this is eye candy. I look at these pictures as I write and the magic of tektites comes flooding back. What a fantastic souvenir of a phenomenal moment in the history of our planet!

Can you grasp the wonder of this? About 790,000 years ago something from deep space exploded in the skies of Southeast Asia. Glassy blobs sprayed from the site of the catastrophe. Later (I wonder how long?) they rained on Australia, 4000 miles away. I am holding one of these in my fingers! 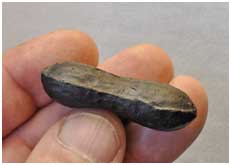 In this specimen, surface melt formed dimply cuspate waves and had just begun to migrate to the shoulders to form an incipient flange. This is an 8.7 gram peanut that really does resemble a peanut. The flight direction was side-on, towards my thumb. 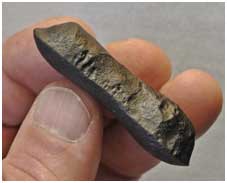 The second form of thermal ablation is size dependent. Tektites under about 10 grams in weight ablated by frontal fusion and melt migration. Above that approximate size, atmospheric transit time was apparently too brief for thermal equilibrium to be achieved through the full mass of the tektite.

The near vacuum of the tail draft in combination with evaporative cooling served to refrigerate (and contract) the trailing region, while the frontal surface was at the melting point of tektite glass or above (c. 650⁰C). Expanding flakes exploded away, leaving the leading surface scarred and somewhat fluted. Such stones are termed thermal ablation cores.

In the 14.9 gram example pictured above, the leading surface in side-on oriented flight was towards the upper right. This gives rise to a confusing morphology. In this case the smoothly rounded shield form is the trailing face (and is a remnant of the primary splashform). Oriented meteorites present an opposite case, with a frontal shield and an irregular posterior. 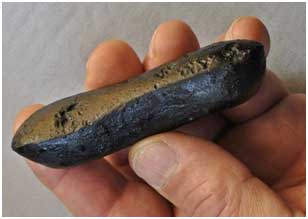 Finally, here is a true monster at 56.9 grams. (Typical Australites are the smallest of the Australasian tektite family. Anything above 20 or 30 grams is a big one. Only around 100 Australites weighing over 100 gms are known out of upwards of 200,000 specimens).

This beaut (using the appropriate Aussie vernacular) is a thermal ablation core, with the leading surface towards my palm. An unusual gloss on that face suggests that after spallation had concluded its work, a thin glaze of melt formed.

Regarding the link between ablation style and mass, Australites offer one more idiosyncrasy: the really big ones (with a threshold somewhere around the 80 to 100 gram mark), sometimes show no ablation effects at all. I suspect that most never achieved consistently oriented flight (the giants are typically roundish and would likely tumble) and their thermal conductivity was too low given their size to trigger the thermal stress conditions leading to spallation.

Welcome to the world of ablated Australite dumbbells. I have had fun writing this piece. I had never before gathered together my favorite peanuts and asked them for their stories. They are a treasure.

Norm Lehrman is a recently retired exploration geologist with over 45 years experience. His career involved fieldwork in over 35 countries on every continent except Antarctica. While stationed in Australia, Norm and his wife, Cookie, became interested in collecting Australites, which ultimately led to a generalized passion for tektites, impactites, meteorites and related materials. In 1999 they founded the Tektite Source business (www.TektiteSource.com) which has evolved into one of the world's premier providers of tektite and impactite specimens. Norm has retired to a ranch near Spokane, Washington, where they continue to serve tektite aficionados worldwide.
PrevParnallee LL3.6 Meteorite
NWA 2798 L3.2Next