The strangeness of 2020 continues and I am spending most of my time at home. About the only meteorite related stuff happening to me is whatever happens in the lab. I work nearly every day on meteorites or tektites. The next hunting trip to the desert is still a while away, so this article will be different from many. I rarely do articles on a single meteorite unless it is one classified for me which I bought or found. But the Meteorite Exchange did a trade recently that brought into the lab a very special meteorite. Chwichiya 002 is a meteorite found in 2018 and it is unique.

I have never spent much time discussing the different classifications and types of meteorites in my articles. That material is readily available in books and on the internet. But, for this article, I need to say that as asteroids and meteoroids are wandering out in space things happen to them. They may slam together and be melted or crushed to powder. The material may be altered by water or heat over eons of time. As a result, most of the meteorites which we recover on Earth have a long story to tell. Type 6 chondrites for instance will tell a story of being heated until most of their chondrules have been reduced to tight clumps of associated mineral grains without any defined edges, the matrix will be recrystallized material. Type 7 ordinary chondrites will be even more altered with so little of the chondrite nature remaining that just the chemistry keeps them from being called achondrites. But if you go the other direction and look at Type 5 ordinary chondrites you will see that the chondrules are not so terribly disrupted and preserve their shape somewhat. They may still show disrupted rims. Type 4 chondrites will be even better preserved sometimes with abundant chondrules that are easily seen under a hand lens or microscope. They may even be quite well defined making chondrule lovers like myself think the meteorites are more pristine than they are. When that happens we don’t get that Type 3 classification we hope for when we send them off to the lab. Type 3 is the least altered end of the ordinary chondrite spectrum. And as the years have passed it has become a classification that has been enormously defined.

I remember when there was just Type 3. Then the decimal point distinctions appeared as the subtle differences were seen in the stones. One might be slightly less heat altered while another had less aqueous alteration. It looked from the outside to me as a collector that there was a holy grail quest going on to find the least altered meteorite. The missing stone that remained the most like it was at the beginning.

So subdivisions of Type 3 stones appeared, 3.8, 3.6, 3.5, 3.4, etc. and ranges appeared in the classifications too. We began to see stones like NWA869 that were so mixed up with different materials that they received classifications such as L3.5-6 initially and later changed to L3.8-6 officially. We saw R3-6 and R3.9 as this trend moved to Rumuruti meteorites and other chondrite families got involved too such as the E enstatite meteorites. Still, the search went on for that perfectly preserved stone. The designations continued to change also. With new symbols being used in the classifications. The / and ( ) began showing up in the late 1990s and early 2000s. Collectors were having trouble knowing what these meant and it appeared so were the scientists since there seemed to be no consensus about their application until real rules were created.

In the following section, I am going to offer some images of meteorites. Most will be type three only but we will start with NWA 869 which has been so commonly distributed that it has not been appreciated for how fantastic a meteorite it is. It contains material from almost every other type of stone meteorite including carbonaceous. It is often brecciated in amazing ways containing large clasts that are very different from each other. For my purpose here I am just going to use it to show the mix of chondrules from crisp to faint faded ones. 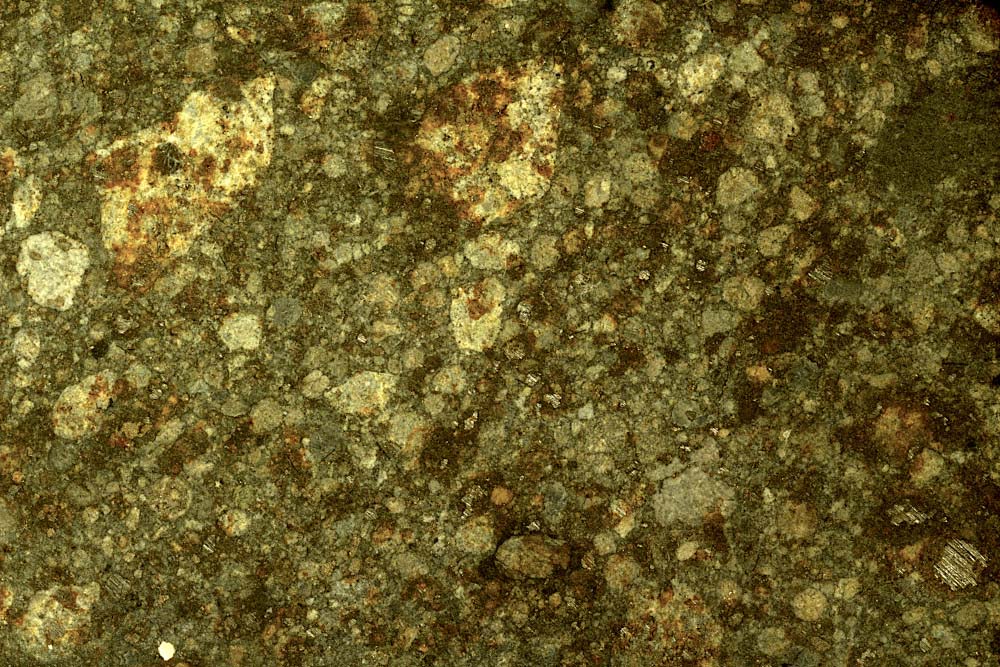 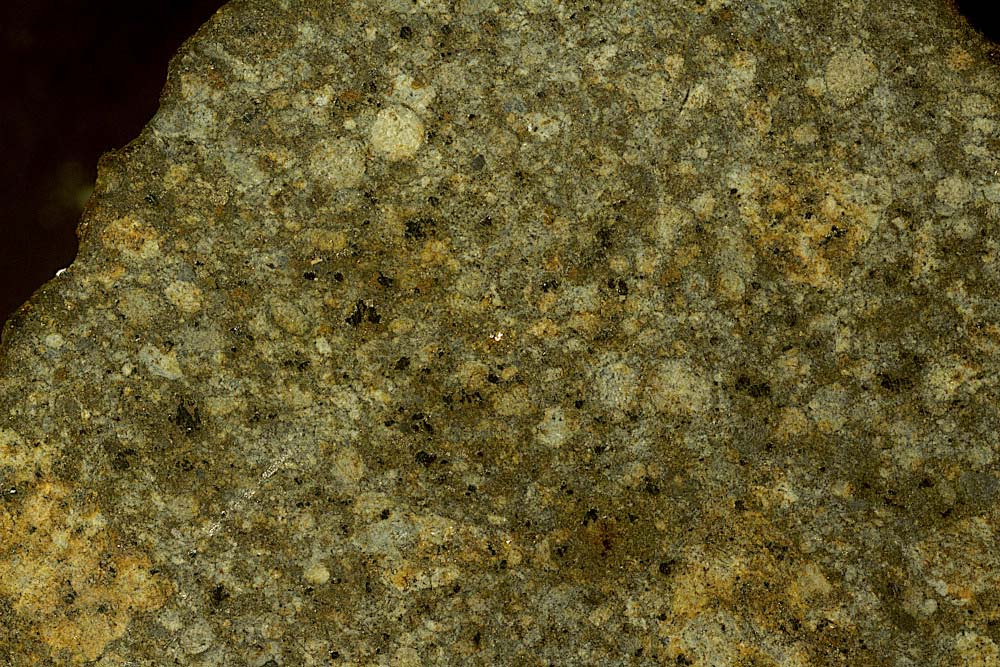 As these images of NWA869 show, there are some very sharply defined chondrules and many that are just clumps of mineral grains. There appears to be much more matrix also then what is seen in many of the type 3 meteorites where chondrules are dense. As shown in the following image. 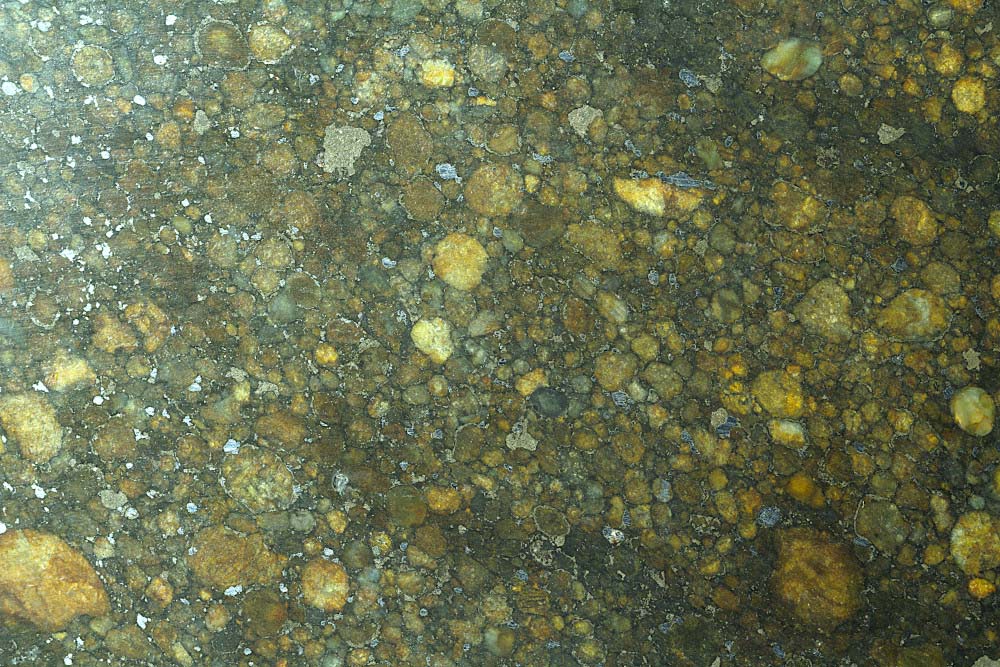 One more really fine Type 3 ordinary chondrite is NWA13090 an LL3, S3, W1. In this stone, the chondrules are often oblong and aligned. Again many are rimmed with sulfide. Native copper is present in this stone. 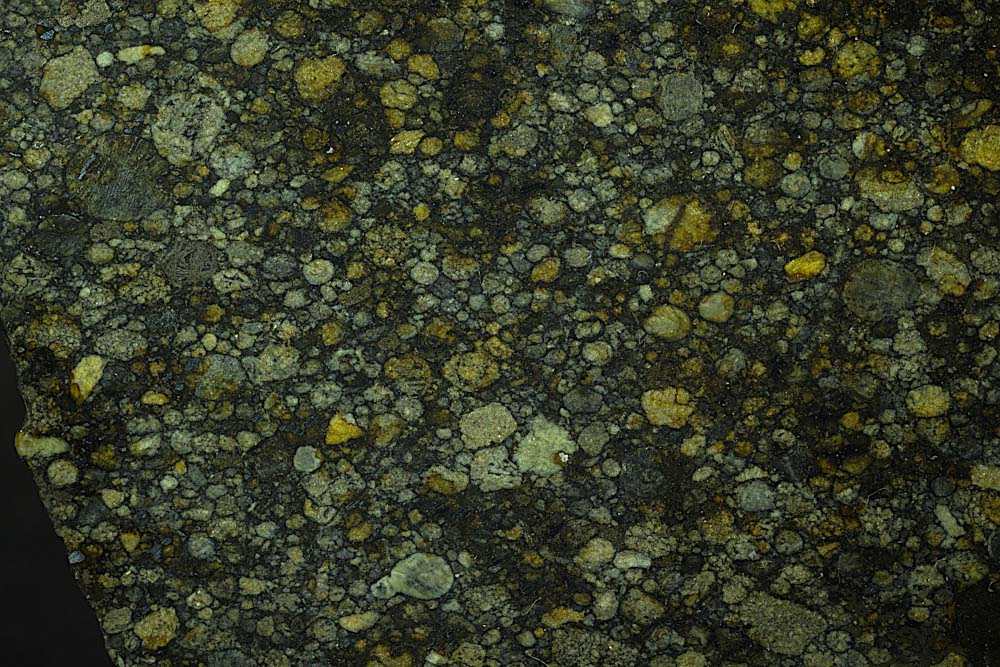 The Type 3 classification was further complicated by mixed material designations such as L/LL3 and L(LL)3 and L/H3 which each came along in their own time. We saw more brecciated ordinary chondrites being recovered and the number of meteorites soared. Though the L3.0 designation had officially been used a few times there was now the equipment and skill for such subtle study of the stones that a second decimal point was added to put some room in between 3.0 and 3.1. Making 3.0X a place for distinguishing very unaltered ordinary chondrite meteorites.

And then there was Semarkona. It was classified when it fell in 1940 in India. My old blue “Catalogue of Meteorites” from 1985 has it listed as an LL3. Only 691 grams were found of this meteorite after the witnessed event. It was a very pristine meteorite loaded with chondrules. In 2005 it was reclassified using the new designations and subtle distinctions as Type 3.00. The listing in the Meteoritical Bulletin was changed in 2007 to reflect the new classification. Semarkona has since become sort of the touchstone for unaltered meteorites both ordinary chondrites and other stone types.

After that long and condensed and maybe not a 100% accurate characterization of the last 40 years of meteorite Type 3 classifying, we can return to Chwichiya 002. It is a carbonaceous chondrite ungrouped but was compared during its analysis to Semarkona, at least regarding how heated it had been. Chwichiya 002 was recovered in Western Sahara in 2018 as black stones with a black interior with abundant chondrules. The Meteoritical Bulletin shows 480um plus or minus 300um as the average chondrule size, I am here to say that the chondrules in the slices I cut were very small. What the Meteoritical Bulletin listing does not say is the meteorite is soft, friable, and honeycombed with fractures. Nor does it say that though it is stone it cuts more like a piece of charcoal.

There are only three meteorites listed as type “C3.00 ungrouped,” they are NWA 11750 found 2016 with a total known weight of 8.5 grams, NWA12957 found 2018, 43grams TKW, and Chwichiya 002 found 2018 with 644 grams of total weight. The first two are suspected of being paired to Chwichiya 002 and if this is true then the entire classification “C3.00 ungrouped,” is less than 700 grams and from a single event. Each of the other two meteorites was also classified using Semarkona as the reference for heat alteration. The three were all said to have “a low extent of heat alteration less than the least heat altered ordinary chondrite Semarkona.” This meteorite has been spared during its life in space from any event that would heat the rock. Chwichiya 002 suffered no collisions, no close encounters with the Sun, no high heat from radioactive decay like is found in deep Earth rocks. It just relaxed and drifted without a care for a really long long time.

I do not keep much of the material that passes through my hands as I am cutting it. But, I did keep a small slice of 0.485 grams of Chwichiya 002. It is black and shiny like the graphite in a pencil. It is heavy actually for being a C chondrite. It has a significant Fe content which is seen in the stone as, scarce free metal, troilite, and magnetite. I had to do some tricky light arrangements to photograph the black slice with almost invisible tiny chondrules. There were what looked to be tiny CAIs too. The chondrules are nice as one would expect with 3.00 even though this is a C chondrite. And as a collector that lives to work with type 3 stones, this was exciting, . . .after it was cut. It was a pain when it was being cut. The nice full slices fell apart at their many fractures into smaller pieces. But as with Martians and Lunars, everything of this one is valuable and saleable.

I have sent a few meteorites off for classification and it is not surprising that none are Type 3.00. The closest I think I have gotten is a Type 3.2 with a comment in the Met Bulletin that something indicated it was less than Type 3.3. It is not likely that I will submit a meteorite on the level of Semarkona, but wouldn’t that be fun.

The Meteorite Exchange, Inc. was born in 1996 with meteorite.com and Meteorite Times Magazine in 2002. Still enthusiastic about meteorites and all things related to them, we hunt, collect, cut and prepare specimens. We travel to gem shows and enjoy meteorites as much now as in the beginning. Please feel free to share any comments you have on this or any of our other sites.
PrevOzerki L6 IMB
Hey Lost City Meteorite, Smile! You’re on Camera.Next