A messenger from a cometary aerial burst fireball! 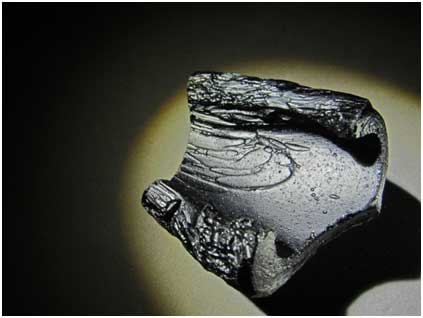 How can one follow the last issue story that explains the greatest tektite mystery of all time? If you missed it, check the archives. I am now satisfied that the Indoaustralian tektite event consisted of a large cluster of aerial bursts with no deep crater formation anywhere!
This month’s Tektite Teaser fits nicely into the heart of an aerial burst fireball.

Every year at the great Tucson rock & gem show, Cookie and I have sorted through every box of tektites we have seen. Always. All of them. It used to be crates of them. We spent whole days helping dealers unwrap their specimens for the show. And we always, one by one, set aside the very best and most interesting pieces. We would bring all the money we thought we would need for the show and be standing in line when the bank opened on the next business day to get more cash. It was not unusual for us to spend over $10,000 buying Indochinese tektites. This year (2017), we spent $25. Our standards have not changed. We continue to buy every quality piece we see. We bought five stones. There were no more that met our standards to buy. Let that sobering thought settle deeply—take your time, reflect, do the sums. But that is another story. This is about one of the five keepers from Tucson 2017.

Something really amazing happened about 780,000 years ago. A string of cometary fragments slammed into the earth’s atmosphere, exploding into great aerial burst mushroom fireballs that vacuumed their substrate clean, even plucking stones from the face of the naked rock! Plasma-hot blobs of molten glass went spinning and oscillating in the boiling, turbulent cloud, into an inferno that made the sun seem cool by comparison! Earth materials were drawn into the heart of the furnace updraft where everything, whether rock or dust, was either burned or vaporized or melted into glass. In the due course of time it spat the products out. Yellow-white turned to neon-orange and so on, until there was a world of white ash speckled with aerodynamically-shaped black blobs of glass scattered on the ground. Dunes of fine particulates welded into Muong Nong layered tektites.

The subject of this month’s column, a trough-shaped piece weighing 60 grams, fell from the towering mushroom cloud. This was once part of a very large bubble that popped. When I symmetrically honor and project the curvatures of this fragment, I get a very large oval bar, about 5 X 3.5 X 2.5 inches (12 X 9 X 6 cm). At some point, after the primary bubble had taken form and the external surface was deeply ornamented in typical tektite fashion, the gases inside began to expand. A blister developed on the surface. It stretched thin, into a filigreed film of lacework, then ruptured and a flap of the torn lace collapsed onto the shiny interior of the bubble where it welded firm.

This is a dangerous topic, as it requires that I talk about tektite bubbles (for which I have only feeble explanations). It is commonly reported that the large bubbles sometimes found in tektites show pressures (actually partial vacuums) corresponding to very high closing elevations (tens of kilometers, but precise calculations are hampered due to possible reactions of bubble gases with the glass of the bubble walls and/or inward diffusion of atmospheric gases). In simple ballistic flight within the cold world of extreme elevations, thin and tiny films and threads of molten glass would cool to brittle temperatures in a fraction of a second.

But this specimen stretched into gossamer threads which then collapsed onto the surface where they welded into the interior of the earlier bubble as if both were at molten temperatures. The testimony of this specimen speaks of primary bubble formation (closure) at a high elevation and, as will be developed below, further transport to even higher elevations, all while remaining in a thermal environment above the melting temperature of the tektite glass. I interpret this to be consistent with a hot, turbulent fireball/mushroom cloud.

The sketch following imagines the instant of skin rupture. While this is a schematic cartoon, it 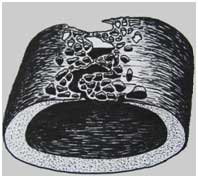 does portray an odd feature of the subject stone. The slightest directional vector to the stretching will draw bubbles into alignment with the elongation vector and the edges then tend to part with stringy cords rather than cellular openings. The relatively equidimensional cell structure shown by this stone rules out a directional splitting of the primary bubble. These fenestrae require a uniform omnidirectional tension, like the skin of a distending balloon. The gases trapped within the bubble were expanding, inflating the still molten glass bubble. Why? 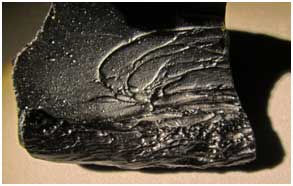 My guess is that, once formed as a primary bubble, this specimen was entrained in a turbulent fireball billowing toward the edge of space. The overall environment within the mushroom cloud was well above the melting point of the glass, so as the atmospheric pressure decreased with increasing elevation, the ball expanded with little resistance and ultimately popped. A stretched flap consisting of a delicate cellular lacework of molten glass threads collapsed onto the interior of the primary bubble and welded deeply into the surface. The entire primary form then apparently fragmented into many parts. I suspect this was a consequence of the imbalance, instability and loss of structural integrity of the stone after popping.

There were many millions or billions of glass blobs spinning and oscillating in the fiery furnace of naked plasma. Everyone had its story, but I find this one special. It offers titillating clues as to the internal structure and processes of an aerial burst fireball of astronomic proportions. That’s pretty cool (or more accurately, hot!). 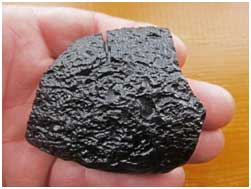 I found this in a small box of scrappy Chinese tektites. The seller, sad that I was only wanting two pieces, charged me two dollars for the stone. She would not have known that she could’ve asked $200 and I would’ve thought it a good deal!

Norm Lehrman is a recently retired exploration geologist with over 45 years experience. His career involved fieldwork in over 35 countries on every continent except Antarctica. While stationed in Australia, Norm and his wife, Cookie, became interested in collecting Australites, which ultimately led to a generalized passion for tektites, impactites, meteorites and related materials. In 1999 they founded the Tektite Source business (www.TektiteSource.com) which has evolved into one of the world's premier providers of tektite and impactite specimens. Norm has retired to a ranch near Spokane, Washington, where they continue to serve tektite aficionados worldwide.
PrevFrom Weston To Creston Book Review
NWA 2724 EucriteNext