A Lost Can of Pristine Sikhote-Alin Meteorites

Seventy years ago the largest witnessed fall of an iron meteorite crashed through the air above the Sikhote-Alin Mountains in southeastern Russia. February 12. 1947 was a year and half after the US dropped an atomic bomb on Hiroshima, Japan so there is little doubt that such an explosion in the sky from a hundred thousand kilograms of iron from space heard up to 300 kilometers away caused pause and a mental comparison of what might have happened.

It was quite a while before the Sikhote-Alin strewn field was fully explored, and once accessed it was clear this was a major meteorite event. Maybe the most major one on record. The 1.3 square kilometer strewn field was filled with craters, the largest over 26 meters in diameter and six meters deep!

Two main styles of meteorites were discovered; complete individuals and shrapnel fragments. And all are classified as group IIAB coarse octahedrite iron meteorites.

Many years ago I purchased a small lot of Sikhote-Alin shrapnel fragments in their natural form. To many observers, the samples were little more than chunks of rusty metal that could be from almost anything. To my eyes, the samples were glorious relics of a globally important meteorite fall, impossible to mistake. Oddly, many commonly available samples of Sikhote-Alin have been cleaned by various means including talc-blasting, wire brushing, and acid dipping. Unfortunately while the cleaned iron might look shiner and prettier, they lack much of the original look that graces so few pieces available today. 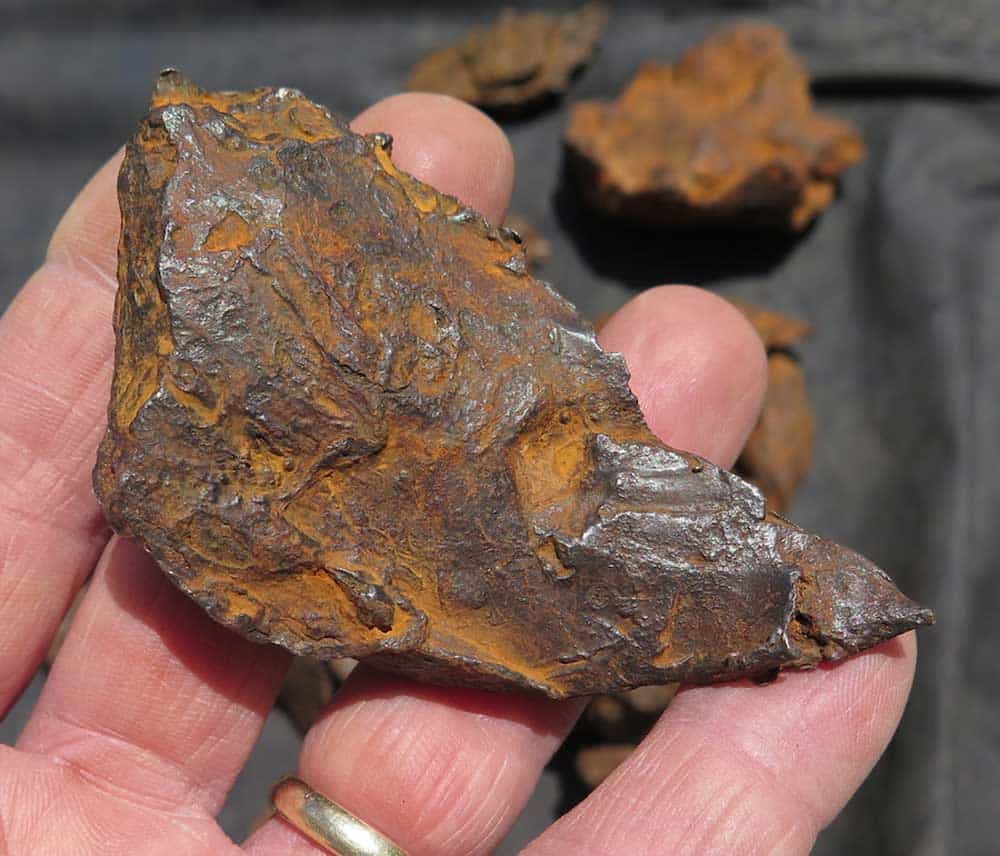 Shortly after the lot of meteorites arrived, I wrapped them in a plastic bag along with some silica gel and placed the bag in a coffee can. That sealed coffee can then sat on a shelf for a over decade in Idaho, and at least another decade in Montana. Until now, that is.

For this article I let sunlight pour into the can illuminating the samples that spent almost a third of their entire earthly life imprisoned in a coffee can sitting on a shelf.

Cleaning Sikhote-Alin specimens not only removes rust but also the natural patina of space iron exposed to an oxygen rich world, a world avoided for the previous 4.6 billion years of life of these specimens. In addition to the surface rust, many small details unique to Sikhote-Alin are also removed. The Sikhote-Alin meteorite proper entered the atmosphere like most other meteorites, but while still traveling at 14 kilometers per second, the meteorite started to fragment. Then at a scant 5.6km above the earth surface (about half as high as commercial airlines fly), the largest mass of Sikhote-Alin broke up in a violent air burst. With little distance to travel before impacting the earth, many of the subtile features of the breakup were preserved. Had the air burst occurred much higher, there would still have been both time and velocity to melt or break off the tiny projections and undulations of molten iron solidified.

So with pleasure, I offer you the first glimpse of these Sikhote-Alin specimens, almost as-found. Enjoy.

Dr. Martin Horejsi is a Professor of Instructional Technology and Science Education at The University of Montana, Missoula. A long-time meteorite collector and writer, before publishing his column "The Accretion Desk" in The Meteorite Times, he contributed often and wrote the column "From The Strewnfields" in Meteorite Magazine. Horejsi is also the Lead Technology Reviewer for The National Science Teaching Association, and just celebrated his 22th year working with NASA and the JPL in education and public outreach (EPO), and is a NASA Solar System Ambassador. Horejsi specializes in the collection and study of historic witnessed fall meteorites with the older, smaller, and rarer the better. Although his meteorite collection once numbered over a thousand pieces with near that many different locations, several large trades and sales and trades have streamlined the collection to about 250 important locations with all but 10 being witnessed falls. Many of the significant specimens in Horejsi's collection are historic witnessed falls that once occupied prominence in the meteorite collections of Robert A. Haag, James Schwade, and Michael Farmer. Other important specimens were acquired through institutional trades including those from The Smithsonian Institution, Arizona State University, and other universities. Horejsi was awarded the Harvey (Nininger) Award in Tucson in 2006, The Brotherhood of Guardians of the Ensisheim Meteorite in 2011, a JPL Inspiration Person, on the JPL STARDUST Team that was awarded the Smithsonian Air and Space Museum Annual Trophy in 2008, and former board member of the International Meteorite Collectors Association, and the Northwest Council for Computers in Education.
PrevStrange and Weird, Odds and Ends
A Partial Australite ButtonNext