A Glass of Three Tales (reprint)

This is a “Best Of” reprint of one of Norm’s favorite articles as he was not able to write an article due to factors beyond his control. 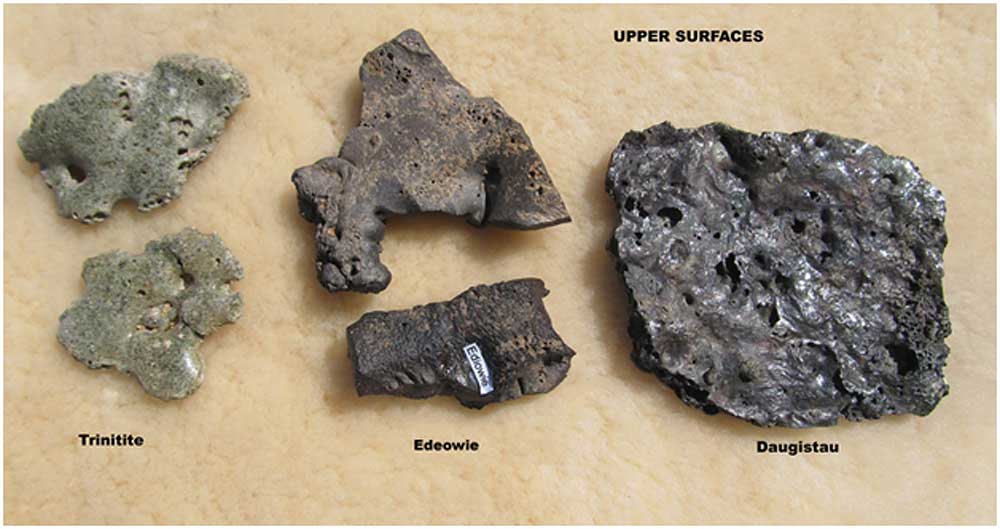 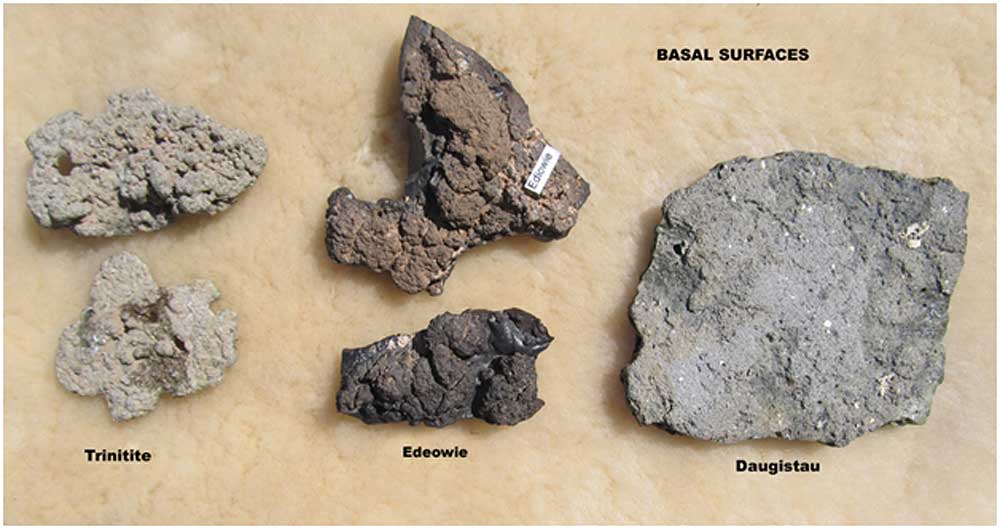 Trinitite. Edeowie glass. Daugistau glass (if you’ve ever heard of this last one, you are part of a very exclusive brotherhood indeed. This article may well be the first time this material has been discussed in any public venue). These three (there are others, but this is a tale of three glasses!) are all of quite remarkably similar character. They consist of relatively thin plates or spatters of glass rarely in excess of a few cm thick. On the basal surface they fused to the substrate sands or soils. On the top they are commonly glossy, sometimes with bulging, ropy, or plastic flow features, like miniature tongues of pahoehoe lava. In broken profile, all are similarly vesiculated.

But don’t suppose that these similarities indicate similar genetic explanations. They all surely involved intense heat of some sort, but no single story works for all three.

(Before I go further I must warn the concerned reader that this article may appear to be supportive grounds for the author’s commitment to some sort of treatment facility. But I have here selected stories that serve to illustrate the remarkable range of thought represented by those who find such glasses interesting and worthy of a good tale). 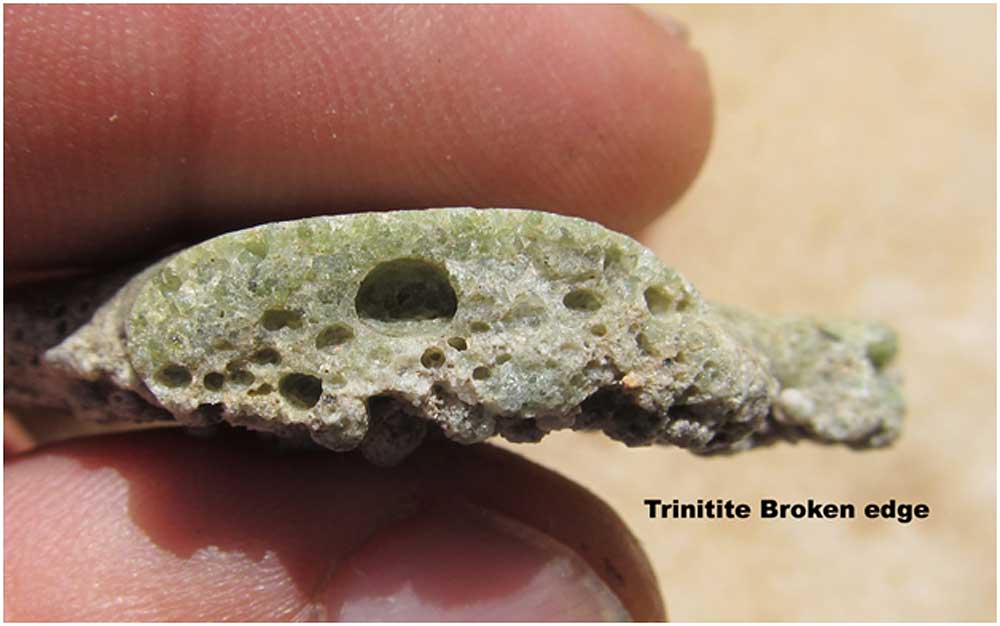 We begin with the only one of the three glasses whose story we know with good clarity.

Exploding with the force of 38 million pounds of dynamite, a billowing fireball rocketed upwards atop a slender cauliflower-textured mushroom cloud, ringed with outward speeding shock-waves, and flashing with massive plasma bolts. For the most part, it vacuumed an 800 meter-wide crater deep into the bedrock of ground zero. The materials sucked into the sun-like temperatures of the fireball were quickly reduced to blobs of green glass, that tumbled about in the white-hot turbulent cloud until spattered out on the ground below as a glistening crust. The blobs fused onto the sand on which they splatted and bubbled slowly, so viscous that bubbles could form but not escape. On steeper surfaces, fingers ran a little, like a thick hot wax.

This is the one glass of the three that we understand with solid knowledge. It took an atomic bomb to make it. Pretty exotic, but nothing compared to the next story! 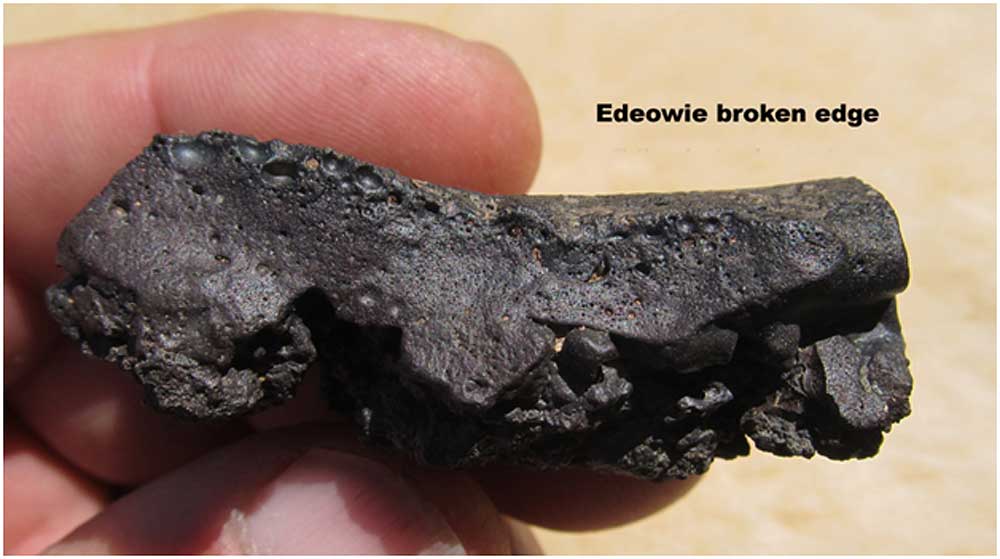 Down under our planet, there is a region about 55 km long and 10 km wide running along the west side of the Flinders Range in South Australia, where discontinuous sheets of glass significantly thicker than Trinitite spot the face of the earth. Some have argued for lightning strike origins, others for some sort of aerial burst like a giant Tunguska. But I’m writing this story, so we’ll talk about my favorite theory: an antimatter bolide! With all the dark matter that astrophysicists see drifting around in space, it has been argued that there is a theoretical possibility of earth being struck by a mass of mirror matter. What would happen? As soon as the antimatter starts encountering atoms of matter on entry to our solar system, it would begin blazing a track of pure energy bursts released by annihilation. In the denser matter-packed lower atmosphere, annihilation would have spawned a searing flash of thermal energy.

Theoretically, one kilogram of matter reacting with one kilogram of antimatter could approach the energy released by the Tsar 27,000 kg bomb, the largest thermonuclear device ever detonated.

Do we have anything on earth that has the earmarks of an antimatter bolide impact? Some would say Edeowie Glass is the best fit. It wasn’t a nuclear blast, so despite its similarities to Trinitite, we need another explanation. Lightning strikes are perhaps the most widely accepted suggestion, but I don’t accept it. We have all sorts of fulgurites from all over the world, and I’m not aware of anything resembling Edeowie. As for a Tunguska-like thermal burst, the linear 55 X 10 km field of distribution doesn’t seem right.

The idea of an antimatter bolide streaking at a low angle across the sky as a bolt of scorching thermal energy is a mind-stretching violation of Occam’s Razor, but at least it’s a fun idea, and I don’t know of anything more plausible at this point, so Ockham may have to hold his breath a while longer.

It even gathers a bit of indirect support from the story of Daugistau glass, the final tale of our three glasses. Here, for the first time anywhere, we present a most peculiar story.

We’ve seen what an atom bomb can do to the face of the earth. We’ve learned ways to harness that power, but it still has a devastating rebellious streak. We speculated on the character of possible products of an antimatter bolide colliding with earth or its atmosphere. Now, we will imagine the practical applications of matter/antimatter-fueled energy release.

This is a personal story. It began for me in 1992 in a Soviet-era uranium producing region so secret that it is not shown on maps of earlier vintage. When the doors of free enterprise first cracked open, I was sent to the Kyzyl Kum Desert of Uzbekistan, looking for gold. At a place called Daugistau, not far from one of the biggest gold deposits on earth, there was a Russian geological expedition village so old that very large trees were buckling the sidewalks by their root mass. I entered the office of the Chief Geologist of the expedition. By force of trained habit, my eyes scanned the shelves of his office for mementos of the most interesting things in the region. There was still a KGB presence that the locals euphemistically called “Department number one”, and a lot of nervousness on the part of our hosts as to what they could or could not reveal about strategic resources, so we learned to scrutinize museum collections and office shelves for clues regarding ore deposits that had not been described to us. In this case, one window sill held a sequence of glassy (trinitite-like!) objects. After formalities and business matters were concluded and the setting had become social, I asked about the glass, and was told the following story:

“During the cold war, this was a very secret place with a strong military presence. In the 1960’s, there was a period when there were many reported UFO sightings in the region. At the height of the excitement, some kids came running into the Daugistau expedition chief geologist’s office, breathlessly describing that they had seen some sort of aircraft land. Humanoid beings got out and collected rocks then got back in and took off. The kids took the geologist to the place, where they had seen the aircraft blast off, and he found there a glistening elliptical patch of glass about 20 meters long. At one end, the glass was up to 6 inches thick. It tapered off to a feather edge at the far end. Beyond that, there were scattered blobs of clinker glass strewn over the desert surface.”

“We considered everything. The military said they had no role in its formation. Lightning was excluded. There was no elemental signature characteristic of some exotic source and no radioactivity. The children’s story is the only story we’ve got.”
My piece is from the downstream apron of the ellipse, a gift from the Chief Geologist’s window sill collection. Although the locality was not far away, he was reluctant to take us there as he was upset by the way the odd feature had been vandalized by UFO buffs.

I am imagining that if one were to ask a nuclear physicist: “What is the most extreme source of power we can imagine that has some degree of scientific plausibility?” I would suppose the answer would involve the thermal burst ballooning from the annihilation of matter and antimatter.

So, indulge me the short leap from a consideration of energy derived from the reaction of matter with antimatter to “best hypothetical interstellar travel propellant”, and we have the story of Daugistau Glass. At Edeowie we boldly speculated on the possibility of an antimatter bolide annihilating in the lower atmosphere. At Daugistau, we find something that looks quite similar where kids said they saw some sort of a spacecraft take off. There, the glassy remnants are limited to a dimensionally small area, but the intense heating event was apparently highly focused. Although an order of magnitude smaller than the Trinitite atom bomb crater, the glass was up to an order of magnitude thicker at the proximal end of the ellipse! Was it the product of technologically controlled mutual annihilation of matter and antimatter? Was this the propellant for interstellar (or intergalactic?) travel? How would one fuel a warp-drive propulsion system?

A glass of three tales, indeed!

Lest this article should signal the end my reputation as a serious scientist, I will toss a conciliatory bone to dear old William of Ockham. There probably is a simpler explanation.

Years ago, we obtained a fragment of what appeared to be typical Trinitite, but is was much thicker than any specimen known to me, something in excess of 3 or 4 inches. It generated a lot of interest and discussion amongst Trinitite enthusiasts, and it was ultimately concluded by most of us that it was not Trinitite at all.

At the Alamogordo White Sands research facility there was work underway on things other than nuclear weaponry. For one, rocket engines were being developed and tested, sometimes anchored to stationary bases in order to better measure and observe performance parameters. Such relatively intense and sustained mega-torches reduced the desert sands—the same desert sands that Fat Man melted—to thick puddles of Trinitite-like glass.

Returning to the Daugistau case, I am sure that neither William of Ockham nor most of the rest of us would find it hard to believe that the cold war era soviet military might be less than forthcoming about secret test work undertaken out of sight of prying eyes deep in the highly classified region of the Kysyl Kum Desert. The asymmetrical puddle of glass sounds just right as the product of a test burn of a rocket or missile engine directed horizontally from a fixed position.

If I had to place my bets, this is where I would put my money, but it is not nearly so much fun as an antimatter-fueled UFO!

Norm Lehrman is a recently retired exploration geologist with over 45 years experience. His career involved fieldwork in over 35 countries on every continent except Antarctica. While stationed in Australia, Norm and his wife, Cookie, became interested in collecting Australites, which ultimately led to a generalized passion for tektites, impactites, meteorites and related materials. In 1999 they founded the Tektite Source business (www.TektiteSource.com) which has evolved into one of the world's premier providers of tektite and impactite specimens. Norm has retired to a ranch near Spokane, Washington, where they continue to serve tektite aficionados worldwide.
PrevThe Rise of the Raj and the Fall of Shergotty
Serra Pelada EucriteNext