A Tour of Tektite Teardrops

On our planet, the grand cabinet of curiosities contains a very limited range of glass teardrops. Volcanic eruptions can form fire-fountain droplets like Pele’s Tears that take their name from Hawaiian traditions. Occasionally, lightning strikes and electrical discharges produce a spatter of glassy droplets, termed “exogenic fulgurites”. I am sure there must be a variety of glassy droplets in coal seam fire slag, but I have no examples. Volcanoes and lightning caused a few tears to fall, but most of Earth’s tears were shed on the occasions when our planet was visited with exceedingly great violence by big rocks from space. 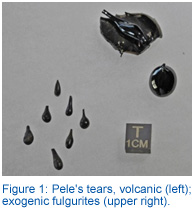 In nearly every instance where glassy impactites formed, teardrops are abundantly represented. As with the dumbbell morphologies described in the last edition, teardrops range in size from hundreds of grams down to microtektite dust. 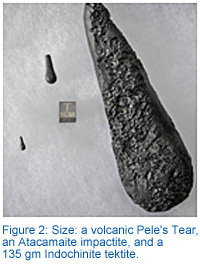 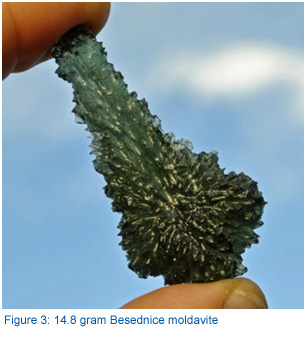 It seems right to begin this tour of tektite teardrops with a tip of the hat to the world’s most beautiful. The deeply etched stones of Besednice, Czech Republic, have no rivals. As the glass solidified some 15 million years ago, symmetrical stress patterns were frozen into the glass which served to guide soil acids that exposed the detail.

These Besednice moldavite treasures came from a depth of 4 meters in an area no bigger than a football field. Nothing quite like them is known in the entire world. To recover a flawless piece of this fragile character required hand digging with utmost caution. The deposit is now completely mined out and turned to parkland. 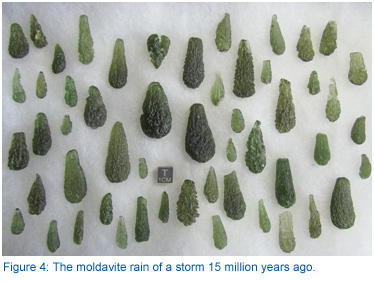 I consider Besednice moldavites to be among the most beautiful natural jewels of the planet. I get lost in daydreams when I consider the day raindrops of green glass fell from the sky! I have written of this before in this column, but the moldavite rain picture is worthy of repetition.

The idea that teardrops are parted dumbbells has been too generally applied. Some certainly are of that origin, but I believe most are simple bulbous splatters. In the case of moldavite rain, hardly any dumbbells fell, maybe one dumbbell for every hundred teardrops. I find it easier to imagine a rain of primary drops than to suppose that they are all parted dumbbells AND that most all of the dumbbells that once were, parted. 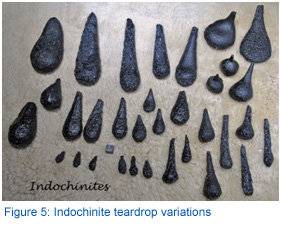 In addition to the geographic and temporal diversity of earth’s tears, the tears themselves come in many forms, best illustrated by an array of 800,000 year Indochinite teardrops. The variations in shape are the result of secondary deformation (which I call “splatting”). It is apparent from these forms that the teardrops fell with differing angles of attack while still plastic. Side-on elongate watermelon seeds, angled golf-clubs, straight on Hershey’s kisses, long bulbous tears, short stout ones, and every other variation.

The lower size limit for Indochinites is restricted by the depth of skin ornamentation: once deep pitting reaches in from all sides and both ends on a small object, primary form is lost. We see very few tiny Indochinite teardrops simply because they did not survive. 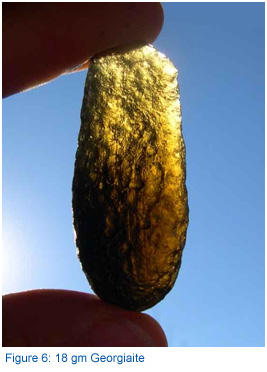 This superb Georgiaite is a particular source of pride and joy. With some 35 million birthdays to its credit and a recent history of annual churning under an iron plow, this amazing teardrop has survived without a flaw. It has been featured in two Georgia textbooks. It was found near Riddleville, Washington County, Georgia.
While both Georgiaites and Bediasites are associated with the Chesapeake Bay impact, there is a peculiar color difference between the two. Georgiaites are mostly shades of straw yellowand quite transparent, while bediasites have darker molasses tints if they transmit light at all. I don’t have an explanation. 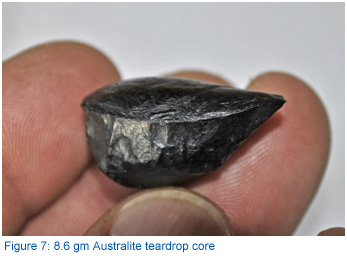 Australite teardrops offer some special fun. Of all the world’s tektites, none have thermal ablation features so characteristically as Australites. Far-traveled members of the 800,000 year Indo-Australian tektite event, Australites commonly show evidence of frontal remelting or thermal spallation related to atmospheric re-entry. This superb example features a side-on attack angle (towards my thumb). The combination of expanding white-hot frontal surfaces with the vacuum-refrigerated posterior resulted in explosive spallation of flakes from the frontal surface. The flake scars are particularly evident on this ablated teardrop Australite. 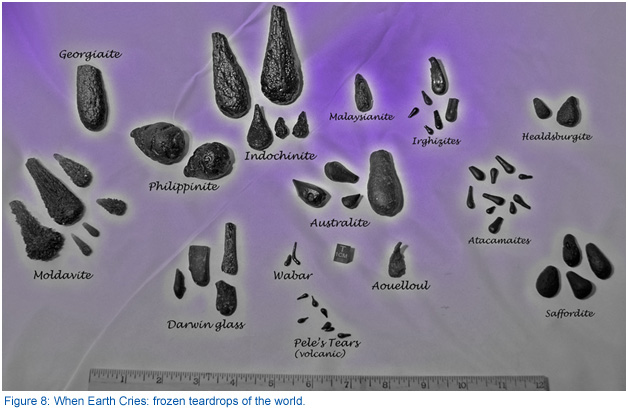 Figure 8 presents a sampling of the earth tears in our collection. Moldavites, Georgiaites, Philippinites, Indochinites, Malaysianites, and Australites are all tektites. Darwin glass, Wabar glass, Aouelloul glass, Atacamaites, and Irghizites are considered to be impactites. Pele’s tears are terrestrial volcanic.

Included in the image are two pseudotektites that can sometimes have nice teardrop forms: Healdsburgites and Saffordites. When closely examined, it will be noted that internal banding does not conform to the physical form of the stone. Their shapes are erosional accidents. This should serve as a reminder: Some things just look like tektites. Some things just look like teardrops.

Glass is unstable over geologic time, so we know little of tektite-producing events before the 35 million year North American Georgiaite/Bediasite event. From that time forward, at least five glass storms are given evidence in the form of tektites. It is the testimony of the tektite teardrops that at random intervals averaging once in every 5 or 10 million years, somewhere on earth showers of molten glass rain down from the sky. It will happen again. These stones give you some idea what to expect. Real preppers will wear hardhats when outdoors. 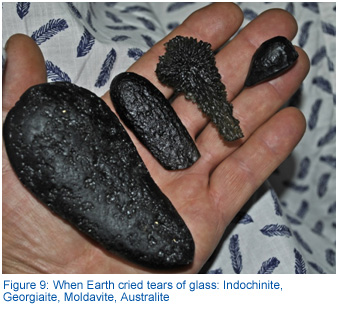 Norm Lehrman is a recently retired exploration geologist with over 45 years experience. His career involved fieldwork in over 35 countries on every continent except Antarctica. While stationed in Australia, Norm and his wife, Cookie, became interested in collecting Australites, which ultimately led to a generalized passion for tektites, impactites, meteorites and related materials. In 1999 they founded the Tektite Source business (www.TektiteSource.com) which has evolved into one of the world's premier providers of tektite and impactite specimens. Norm has retired to a ranch near Spokane, Washington, where they continue to serve tektite aficionados worldwide.
PrevSalon de Ensisheim June 21-22-23 2019
Aguas Zarcas CM2 – Dust Mantles and Thin Thin SectionsNext