2012 Vacation Part One “They Came From Space”

5:30 AM Wednesday morning the alarm went off though I was already awake. It had been a restless night of sleep. I guess I was pretty excited about the trip we were about to take. Paul was picking me up at 6 AM I had just enough time to set all my stuff outside on my front porch. We were headed to Phoenix with a one-day stop in Quartzsite. There was a meteorite exhibition opening on Friday morning at the Challenger Center in Phoenix. It was being put together by Geoff Notkin. We expected it to be something fantastic.

We arrived at Quartzsite about noon I guess. Drove around town for a few minutes checking out the RV parks. We found one that was pretty nice and headed off to get something to eat. After lunch we made the rounds of the rock stores and collectibles shops. I found some chunks of rock and I simply couldn’t live without. We bought some neat rotating specimen stands. They were solar powered and not very expensive. We got done walking around town which killed about three hours and it was time to head off to the RV park. We got all checked in and as we were leaving the office the woman there told us that the Italian restaurant just down the street was really excellent. Our intent had been to cook something for dinner in the RV. But fresh made restaurant pizza sounded pretty good to both of us. It was just a short walk from the RV so after working on the computer for a couple hours we headed over there. The pizza was just as delicious as we hoped for and since we were walking we both had a couple of beers. Our plan for the next day was to go just down the frontage road a little to a placer gold mining area and do some metal detecting. We would only be able to hunt there for a few hours before it got too hot. It would be over 100º F again. 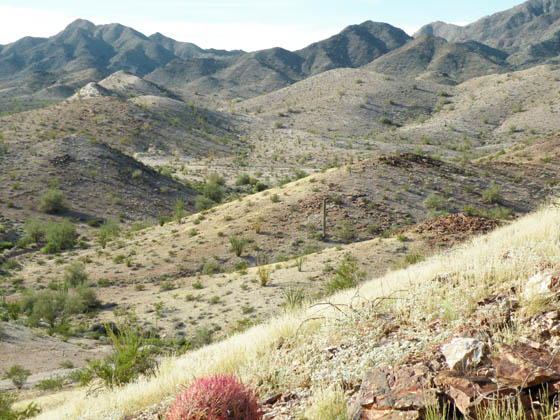 We were out on the hills a little before eight o’clock sweeping the metal detectors. It was a spectacularly bright beautiful day. There were mines, adits, and pits all over the area. All the region west of Quartzsite has been hunted for gold since before the Civil War. After a little while we stopped swinging the metal detectors, and just enjoyed the exploring. We did take a lot of pictures of course. As we hiked up around one little hill we saw something pretty surprising. In all the years of hiked in the desert neither of us had ever come upon a grave before. It was exciting, fascinating, interesting, and just a little tragic all at the same time. Guess we have a research project now to see if there’s anything we can learn about the grave. There have been three major phases of activity out there. The first, before the Civil War, the next around the turn of the last century, and the last the mid-1930s. To me the grave looks older than the 1930s but not as old as the Civil War. The wood that’s left of the cross is really weathered but doesn’t look to be 160 years old. We pressed on from the grave across a valley and up over one more hill which gave us a really good vantage point of the rest of the area. It was about 10:30 AM by then and time to head off to Phoenix. 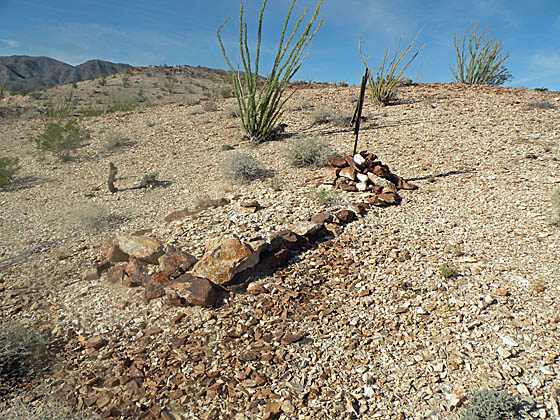 We usually watch movies on my laptop at night in a motorhome. The night before I realized I’d forgotten the power cord that plugs into my power supply. Not only would we not see movies I would not be doing any writing or work during the week. I called my wife and ask her to find it in my office. That was not very hard, it was sitting right next to the where everything for the trip had been piled. She sent me a picture from her phone just to be sure it was the correct cord. And it was the right cord. She took it down to FedEx Office and send it overnight to a location close to where we were going to stay. So by the time we got done hiking and exploring I was able to check and see that it had arrived. We made our way through Phoenix and over to Peoria. The FedEx Office was only one block off the freeway so I hopped out, got the package that was on hold, jumped back in the RV, in about 5 minutes we were back on the road.

We settled into our RV Park, got all showered up and cooled off, we had a couple hours to relax before we headed for dinner. We had been hoping for about a week that Geoff would be able to get his exhibit all set up and could join us for dinner. As it turned out in the last couple hours of working at the museum the exhibit just all came together. Paul and I were really looking forward to dinner. Paul’s brother Tony and his girlfriend Tricia live near Phoenix and they had chosen the place for dinner. It was a wonderful buffet at one of the casinos. Geoff was bringing Tim Mallory a vice president at Fisher Labs, as happy Gold Bug 2 users we were interested in meeting him. Bob Holmes another good friend from Arizona was joining us as well. We had a super great group of people and expected to have a wonderful meal. We were not disappointed, we got to hear great stories told by Geoff and Tim. We got to catch up a little with Bob and it’s always great to see Tony and Tricia. Paul and I always seem to be the last ones to leave restaurants whenever we go out to dinner with Tony and Tricia. The same thing happen this time we looked around and realized no one else was in the buffet and most of the lights had been turned down. Geoff invited us to meet somewhere near his hotel to continue the fun and conversation a little longer.

I have driven through Phoenix about three times in the last 20 years. But I’ve never gotten out of the car until that Thursday morning when I picked up the cord at the FedEx Office. It was pretty surprising to find as we drove to the sports bar across from Geoff’s hotel that it was about 200 feet from the corner that the FedEx Office is on. Just one of those really strange coincidences that happen in life.

Paul and I were on a little bit of a tight schedule. We had to be back on the road by about 1:30 or two o’clock in the afternoon. So we got to the Challenger Center soon after they opened in order to see all the rest of the museum before Geoff’s big opening. It’s a great science center. It has lots of shuttle era memorabilia on display, many interesting pieces of spacecraft hardware, an observing deck on the roof for public star parties, and some great outreach programs for the young and the community at large.

There was a reception in one of the conference rooms starting at noon before the ribbon-cutting ceremony for “They Came From Space” Geoff’s wonderful exhibit. The reception was a roomful of dignitaries and famous individuals from Arizona’s meteorite community. We felt pretty honored to be invited. Maria Haas arrived and it is always a joy to see her, so the IMCA was represented at the opening as well. The director for the Challenger Center was MC at the reception. She introduced Tim Mallory who gave a nice though brief talk about Fisher Labs commitment to knowledge and exploration. Fisher Labs is one of the corporate sponsors of the exhibit. We watched a nice long clip from an episode of Meteorite Men, and than it was Geoff’s turn to speak. He gave a great talk, woven together with stories, and lots of humor. The excitement and anticipation were building. Everyone wanted to get into the exhibit. We still had to wait for the ribbon-cutting ceremony. Soon enough though the room was open and we got to see a truly fabulous display of meteorites, memorabilia from Meteorite Men, costumes from the show, metal detectors and tools.

The exhibit runs for the next year. If you are in the Phoenix area I highly recommend that you visit the Challenger Center and see “They Came From Outer Space”.

We regretfully made our good byes and got on the freeway heading north to our next stop on what proved to be the best vacation we have ever taken (so far). But that is a story to continue in the next two articles. Stay tuned, as the old expression goes to hear more of our adventures on the 2012 vacation trip.

The Meteorite Exchange, Inc. was born in 1996 with meteorite.com and Meteorite Times Magazine in 2002. Still enthusiastic about meteorites and all things related to them, we hunt, collect, cut and prepare specimens. We travel to gem shows and enjoy meteorites as much now as in the beginning. Please feel free to share any comments you have on this or any of our other sites.
PrevThe Recovery of the “Novato” Meteorite that Fell on 2012 October 18, 02:44 UT (Oct. 17, 19:44 PDT)
Ochansk: If it’s abundant, it better be goodNext