10-year Anniversary for Nevada Meteorite Picture of the Month

At least once a month since 2003, a Nevada meteorite has been showcased on the “NevMetPoM” website . 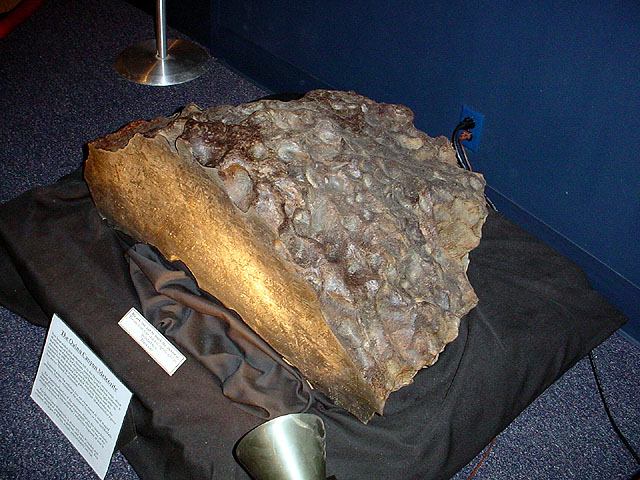 The above image is the first one that started it all. And a decade later, I’m still highlighting Nevada meteorites on that webpage. At least once every month, I’ve posted a picture of a different Nevada meteorite (along with a description and any available information), covering a span of ten years. Admittedly, some meteorites like Battle Mountain (which was Nevada’s first and only observed/recovered fall) got more than a couple months’ worth of attention. I think that’s understandable. Also, a couple of bona-fide DCAs (Dense Collections Areas) like Tungsten Mountain may have garnered more than 12 months worth of attention, but that is only a reflection of the diversity of classifications from that locality. And if you “do the math”, I’m sure you’ll realize that there are many more “months” in a ten year period than there are “classified” meteorites allocated to Nevada, which shouldn’t be your first clue that there will be a fair-share of “unclassified” finds depicted on my NevMetPoM. But you have my personal guarantee (no matter how badly weathered the find) that every image is of a real meteorite.

What is truly remarkable is that there are still so many more meteorites in Nevada that NevMetPoM may still be going strong 10 years from now!

In any case, it was my initial hope that my “pictures” would be informative, if not actually instructional, for people who wanted to see what a meteorite “looked like”, or who wanted to know “what to look for” when meteorite-hunting.

That still is my hope, but now I have an additional, more urgent hope. I hope that the sheer number of these Nevada meteorite finds will lend some credence to those researchers who are suggesting that more attention (funding) be given to these rocks from space that are falling on us in frequency of numbers and SIZES that may be UNDER ESTIMATED.

All I’ll say is, how certain can we be of the frequency of Tunguska-style impacts, which leave no evidence of their occurrence in the geologic record? Yet, should it re-occur even in the next 100 years over a densely-populated area, it would obviously be a major cataclysm, but we couldn’t call it “unavoidable”, let alone “unexpected”.
It may seem quite a stretch relating the little weathered chondrites that I depict monthly on the NevMetPoM to huge “city-smashing bolides”, but I see all of these space rocks as a continuum where the number of small meteorites that have landed on this planet is relational to the number of large meteoroids yet to hit us. 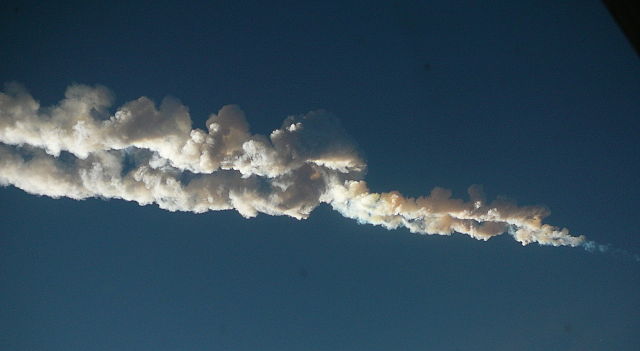 On a lighter note, before I sign-off, I would like to thank all of those that attended our little Meteorite & Tektite Party in northern San Diego County on August 24th. It was a lot of fun and we are hoping to make it an annual event (and possibly have a Meteorite Auction next year, if Michael Blood has his way;-).

This small fete was held at the same venue where my 65th Birthday Party was held last year, and is where I got the idea to resurrect the old Annual Tektite Party (hosted by Paul Harris and Jim Tobin) that I used to attend 10 years ago in Torrance, California.

This year the “Meteorite & Tektite Party” was an open event to anyone that was “in the area” or was willing to travel down the Interstates to San Marcos, California. But all of the credit for organizing and running this event goes to my better-half, Monika Waiblinger. She initiated this function shortly after she formed a Facebook Group called the “California Meteorite Club“. Originally this was an “open” Group, but shortly after its formation the members voted to limit membership to California residents only. At least, that’s what they tell me. Because, I’m still NOT on facebook! 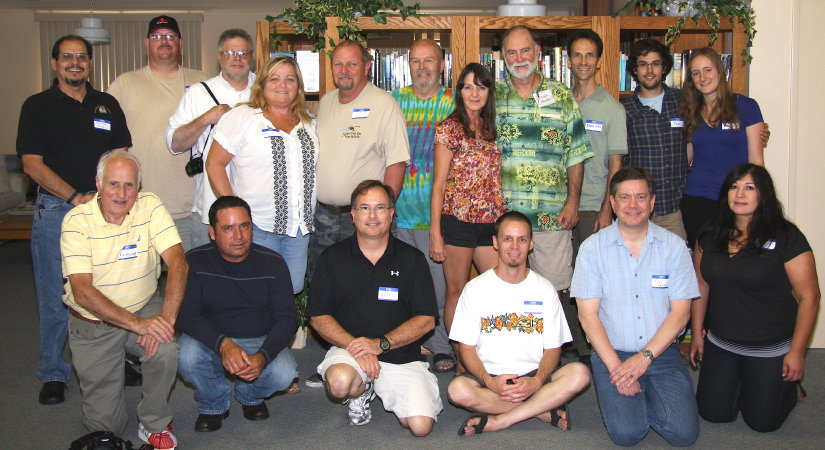 Moni had set up tables for meteorite displays, and it seemed that everyone brought a meteorite with them to share. There were some fulgurite-looking rocks displayed and people were asked to vote “yea or nay” (the vote was “thumbs-down” on it being a fulgurite). And there was a California Meteorite display that I pieced-together from my collection. But the hit-of-the-party was the whole-stone Lunar rock (NWA 7022 prov.) that Jason Utas carried in his pocket. There was some discussion about having a “slab exchange” (trade specimens), or a “silent auction”, or even talks and presentations at next years Meteorite Party. 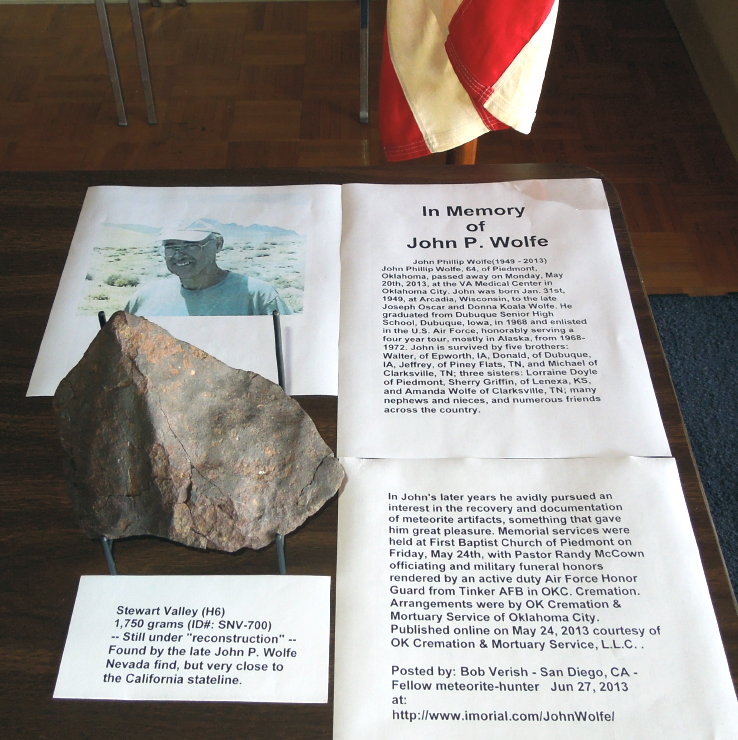 Memorial for our friend and fellow meteorite finder John P. Wolfe
Among the various displays and “show&tells” was this Memorial to John P. Wolfe that I set-up in remembrance of our recently departed friend and colleague.

If you would like to pay your respects, I have published an on-line memorial at this website:
http://www.imorial.com/JohnWolfe/

For a “Directory” of past Nevada Meteorite Picture of the Month | click on ARCHIVE at the bottom of each NevMetPoM webpage.

Bob is a retired aerospace engineer living in Southern California, and has been recovering meteorites from the Southwest U.S. Deserts since 1995.
PrevAllende Special
Meteorite Hunting and Astronomy Time AgainNext