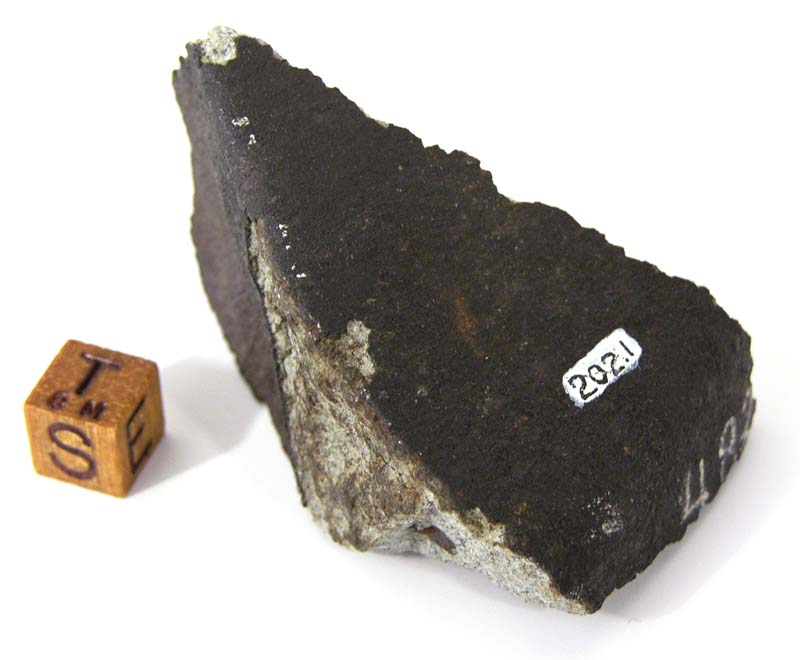 Sixty-one years before John Glenn, the first American to orbit the earth, was born, a meteorite fell in the county of his birth. The stone later named New Concord, was the first of only two meteorites that fell in Ohio and whose falls were witnessed. At the time, some described this fall as “the most remarkable ever observed in this country, and equal to, if not surpassing, the famous fall at L’Aigle, in France.”

There were many eyewitnesses to this fall, many will compelling stories rich in metaphors. My favorite is the description that this fall appeared as blackbirds in the sky. It is obvious that that particular May Day was little more exciting than most.

For example, Dr. McConnell of New Concord made the following report:

On Tuesday, the first of May, at 28 minutes past twelve o’clock, the people of that vicinity were almost panic –stricken by a strange and terrible report in the heavens, which shook the houses for many miles distant.

The first report was immediately overhead and after an interval of a few seconds was followed by similar reports with such increasing rapidity that after the number of 22 were counted, they were no longer distinct, but became continuous, and died away like the roaring of distant thunder, the course of the reports being from the meridian to the southeast.

In one instance, three men working in a field, the self-possession being measurably restored from the shock of the more terrible report from above, had their attention attracted by a buzzing noise overhead, and soon observed a large body descending strike the earth at a distance of about one hundred yards. Repairing thither they found a newly-made hole in the ground, from which they extracted and irregular quadrangular stone weighting 51 pounds. This stone had buried itself two feet beneath the surface, and when obtained was quite warm. 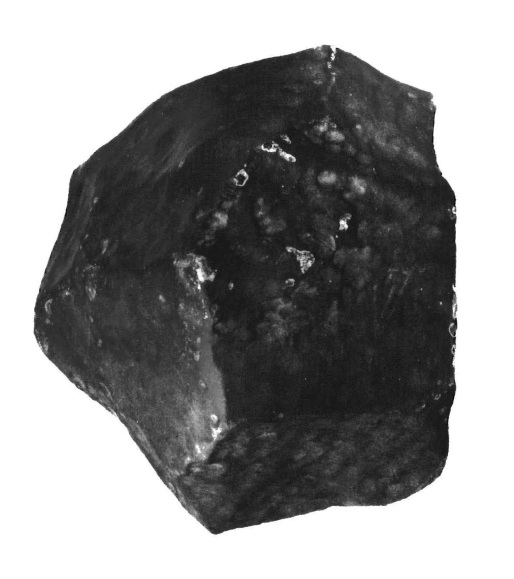 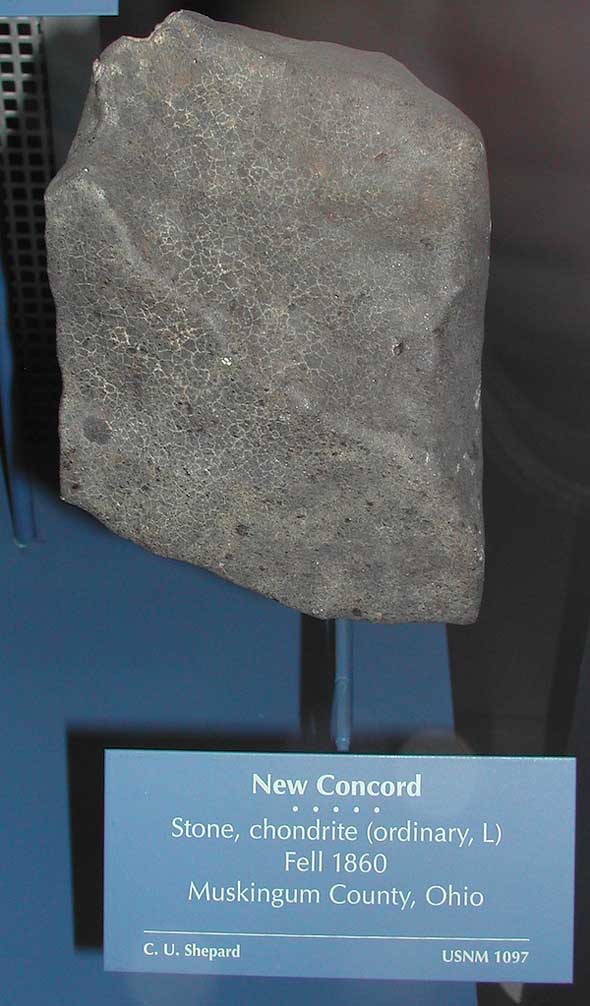 An extra-ordinary phenomena occurred on Tuesday, about noon, which has been noticed in many counties in eastern Ohio. This occurrence, although it may be incredible to some, was certainly noticed by many in different localities about the same time. In this city an explosion or noise was distinctly heard.

At New Concord 16 miles east, a gentleman who was out in his field, heard a large crash similar to sharp thunder, a succession of which lasted for about half a minute and died away like the sound of a receding train of cars. On looking up he observed an object descending with great rapidity in an angling direction, and on marking the point where it touched the earth, he found there a stone imbedded two feet in the earth and somewhat warm, weighing 53 lbs. Another was found of 56 lbs, one 40 lbs, and one of 36 lbs in weight, and all within the circumference of a few miles. A small portion of one of these we have in our sanctum.

At Bellair the concussion was so strong as to force open the large doors of a car house.

At Malaga some of the inhabitants were frightened thinking it an earth quake.

The shock at Barnsville seemed to jar the buildings to their foundation.

Some boys were out in the woods near McConnellsville, which is perhaps 30 miles from New Concord, and observed what they termed a large red ball descending to the earth with a fiery tail to it, but were so frightened they immediately returned home.” (Anane, 1860) 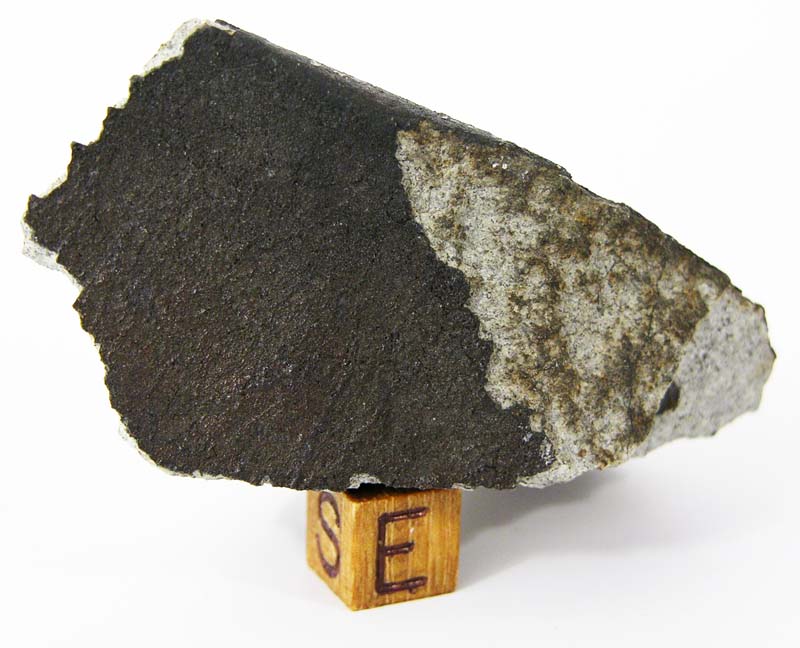 An article in the 1861 issue of the Silliman’s Journal (xxxi, pp. 87-98) contained the following passage:

Mr. McClenahan states that at Cambridge, in Gurnsey County, Ohio, about twenty minutes before one o’clock P.M., three or four distinct explosions were heard, like the firing of heavy cannon, with an interval of a second or two between each report. This was followed by sounds like the firing of a musketry in quick succession, which ended with a rumbling noise like distant thunder, except that it continued with about the same degree of intensity till it ceased.

It continued two or three minutes and seemed to come from the southwest, at an elevation above the horizon of thirty to forty degrees, terminating in the southeast at about the same elevation. In the district where the meteorites fell the explosions were heard immediately overhead.

The reports were so heavy as to produce a tremulous motion, like heavy thunder, causing the glass in windows to rattle. The sound was so singular that it caused some excitement and alarm, many supposing it an earthquake. At Barnesville, twenty miles east of Cambridge, the cry of fire was made , as the rumbling sound was thought to be the roaring of fire. 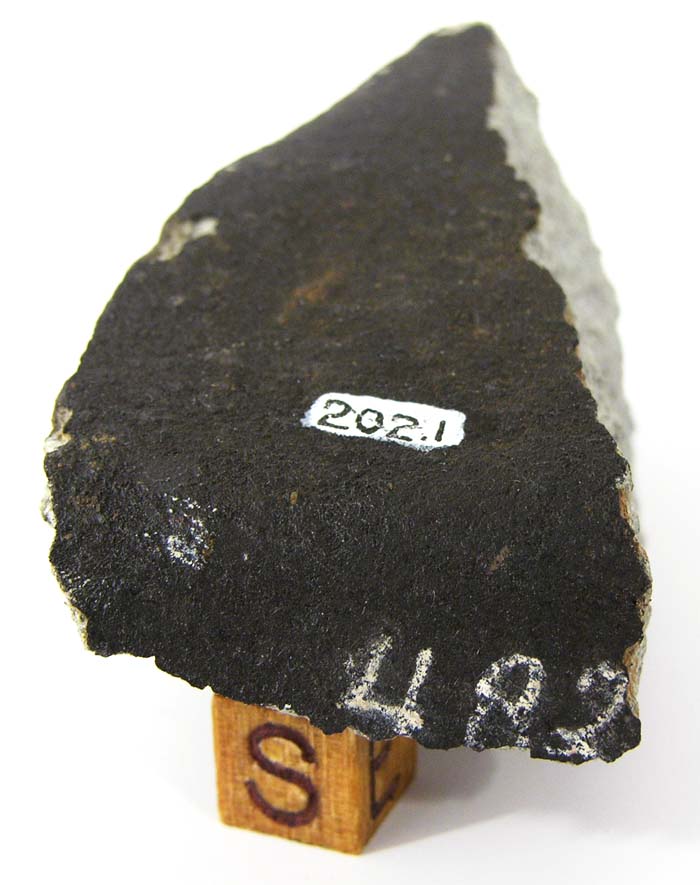 There is no shortage of modern references to the New Concord fall hitting and killing a horse. A colt no less. The problem is there are no historic references to this event that have been found (at least that I know of). One reference mentioned that one of the stones missed a horses head by three feet. But three feet might as well be three miles.

Almost a hundred years after the fall of New Concord, a mention of the colt event appeared in the second edition of Catalogue of Meteorites. However, the story was absent in the first edition published some 30 years early and still six decades after the fall.

O. C. Farrington made a highly detailed compellation of information about this fall available in his monumental 1915 work titled Catalogue of the Meteorites of North America to January 1, 1909. I strongly recommend that any collectors or dealers who want to continue keep kicking the dead horse story, that you read Farrrington’s entry for new Concord. I find it very hard to believe that if an animal was killed by this fall, that particular earth-shattering fact would not have escaped Farrington’s pen.

For those who want to delve into the dense writing, here is a link to the .pdf of the entire book. I highly recommend reading it just for the shear excitement and appreciation of the fall. Be warned, however, the download is 70+ MB and the New Concord story is on pages 329-342.

While the colt killing makes an already interesting fall even more significant, repeating the story does not make it any more real. Sorry about that.

Dr. Martin Horejsi is a Professor of Instructional Technology and Science Education at The University of Montana, Missoula. A long-time meteorite collector and writer, before publishing his column "The Accretion Desk" in The Meteorite Times, he contributed often and wrote the column "From The Strewnfields" in Meteorite Magazine. Horejsi is also the Lead Technology Reviewer for The National Science Teaching Association, and just celebrated his 22th year working with NASA and the JPL in education and public outreach (EPO), and is a NASA Solar System Ambassador. Horejsi specializes in the collection and study of historic witnessed fall meteorites with the older, smaller, and rarer the better. Although his meteorite collection once numbered over a thousand pieces with near that many different locations, several large trades and sales and trades have streamlined the collection to about 250 important locations with all but 10 being witnessed falls. Many of the significant specimens in Horejsi's collection are historic witnessed falls that once occupied prominence in the meteorite collections of Robert A. Haag, James Schwade, and Michael Farmer. Other important specimens were acquired through institutional trades including those from The Smithsonian Institution, Arizona State University, and other universities. Horejsi was awarded the Harvey (Nininger) Award in Tucson in 2006, The Brotherhood of Guardians of the Ensisheim Meteorite in 2011, a JPL Inspiration Person, on the JPL STARDUST Team that was awarded the Smithsonian Air and Space Museum Annual Trophy in 2008, and former board member of the International Meteorite Collectors Association, and the Northwest Council for Computers in Education.
PrevThe Real Rocks at Reality Rocks
Moldavites As FoundNext