The Forest City Meteorite: When Science Took a Backseat to Litigation

Iowa, as a state, joined 28 other others back on December 28, 1846. And late that same century, as Frank Cressy wrote, “Over a 15 year period in the late 1800s, the state of Iowa experienced three of the largest meteorite showers in the history of the United States.”

One of those falls was named Forest City, and it was the last of the three.

The first of the three major Iowa falls was Homestead, a L5 fall on February 12, 1875 of over 226kg. The Second was Esterville, a mesosiderite of over 337kg and it on fell May 10, 1879. And the third, Forest City, an H5 chondrite that fell on May 2, 1890 with 122kg of material recovered. So in those 15 years that Cressy referenced, over 685 kilograms of rocks from space fell on the freshly minted soil of Iowa. A forth stone meteorite, well, actually the first meteorite to fall in Iowa was called Marion and fell less than two months after the ink dried on the document welcoming Iowa to America. 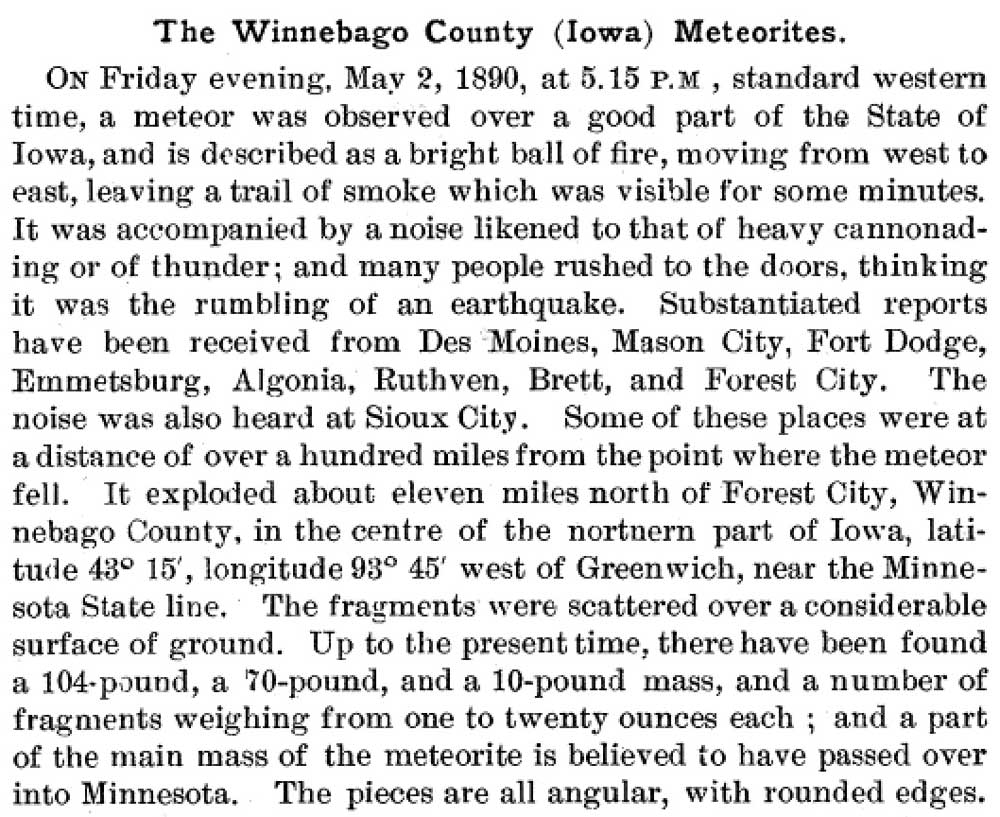 At the risk of a pun, the initial earthly journey of Forest City was a bit rocky. But then even the name Forest City could be a bit oxymoronic. All joking aside, the bumpy ride Forest City endured was not with the usual skepticism of meteorites falling, but rather was the age old selfish flaw of greed. The story was summed up in a July 1929 article published in the Iowa Recorder, a newspaper in Butler County that ended publication in 1956. 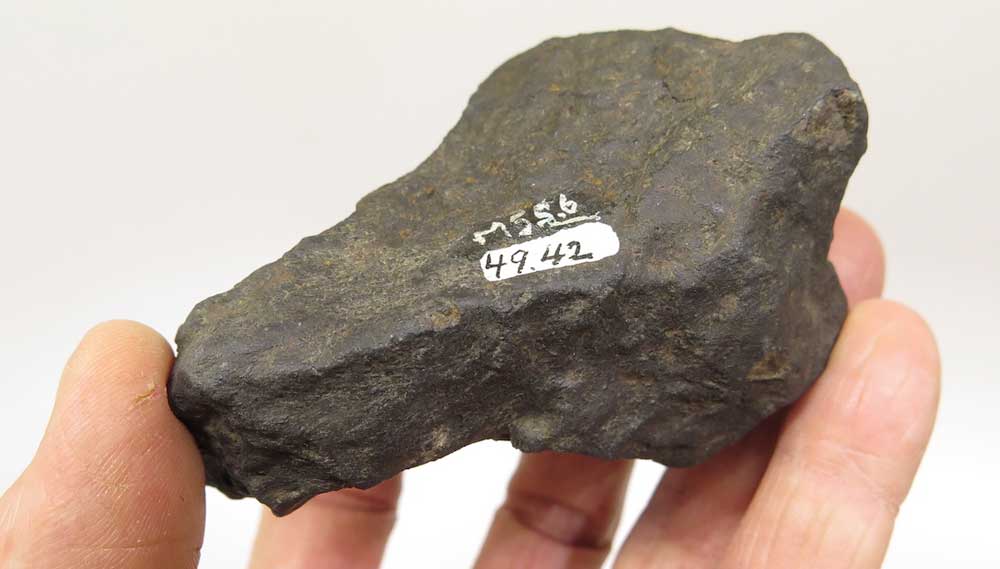 On May 2, 1890, Large Meteor Roared Across Sky and Exploded, Spreading Meteorites Over Ground

Late in the afternoon of May 2, 1890, people in northern Iowa were startled by the appearance of a great fireball in the west which eclipsed for a moment the sunlight of an almost cloudless sky. Traveling at incredible speed from the southwest the meteor roared across the sky sputtering and throwing off a long train of sparks. The dazzling head, likened to the moon in size, left a heavy line of black smoke in its water, distinctly marking the meteor’s course through the heavens. They story of the Forest City meteor, as it was named, it told by Ben Hur Wilson in a recent number of “The Palimpsest,” published by the State Historical Society of Iowa at Iowa City.

Few meteors have been more widely observed in their passage, perhaps on account of the time of day and the ideal weather conditions existing at the time. Authentic reports came from Des Moines, Mason City, Fort Dodge, Emmetsburg, Algona, Ruthven, Humboldt, Britt, Garner, Grinnell, Sioux City, and points outside of Iowa. For many miles around Winnebago county, the noise sounded like heavy cannonading accompanied by a hissing and a tremor which caused people to rush from their houses to inquire the cause.

The meteor descended at an angle variously judged to incline from 50 degrees to 55 degrees with the horizon, and to the eye its course was apparently from the southwest to the northeast. The final explosion occurred over Winnebago county about eleven miles northwest of Forest City. An area some three or four miles in length ad from one and one-half to two miles in width was showered with meteorites. Although this meteoric field was adjacent to the town of Thompson, it was readily accessible from Forest City, the county seat. Inasmuch as most of the publicity emanated from the latter place, the meteor became known as the Forest City meteor, though Thompson would have been a more accurate geographical designation. Of the larger meteorites recovered from this field, two were found weighing approximately four pounds each, one of ten pounds, another sixty-six, and the largest eighty-one pounds. Several hundred smaller pieces ranged in weight from less than an ounce to almost a pound.

Newspapers throughout the surrounding country carried reports of the meteor and scientists became interested at once in recovering fragments for museums. Within a day or two after the appearance of the meteor, Hans Matterson brought a few broken fragments to Forest City and left them on display at a local hardware store.

Matterson reported that a neighbor Peter Hoagland, has found a stone “as large as a water-bucket.” About this time Horace V. Winchell, assistant State Geologist representing the University of Minnesota, arrived in Forest City. He went directly to the Hoagland farm and tried to purchase the stone. Before terms could be agreed upon a second purchaser arrived. Bidding became spirited but Winchell persisted, and finally purchased the fragment for more than a hundred dollars.

Having paid Hoagland in cash. Winchell placed the meteorite in the back of his buggy and drove back to town. At Forest City he packed the stone in a strong box, took it to the express office, and consigned it to Minneapolis.

Meanwhile his competitor, learning that the stone had not fallen on Hoagland’s land but across the road, secured a write of replevin in the name of the owner of the land on which the stone had fallen. Armed with his writ, the sheriff went to the express office and took possession of the box.

The district court in Winnebago county decided that the stone belongs to the owner of the land when it had fallen. Hoagland, therefore was compelled to surrender the money he had received. The case was appealed to the Supreme Court of Iowa but before this tribunal had rendered a decision the University of Minnesota had secured the meteorite through a second writ or replevin. In October, 1892, the Supreme Court of Iowa sustained the finding of the lower court, and suit was brought against the University of Minnesota on its replevin bond. The jury assessed the value of the meteorite at nearly five times the original value fixed by the court, which sum was cheerfully paid, and the stone was deposited in the museum of the University where it has remained to this day. 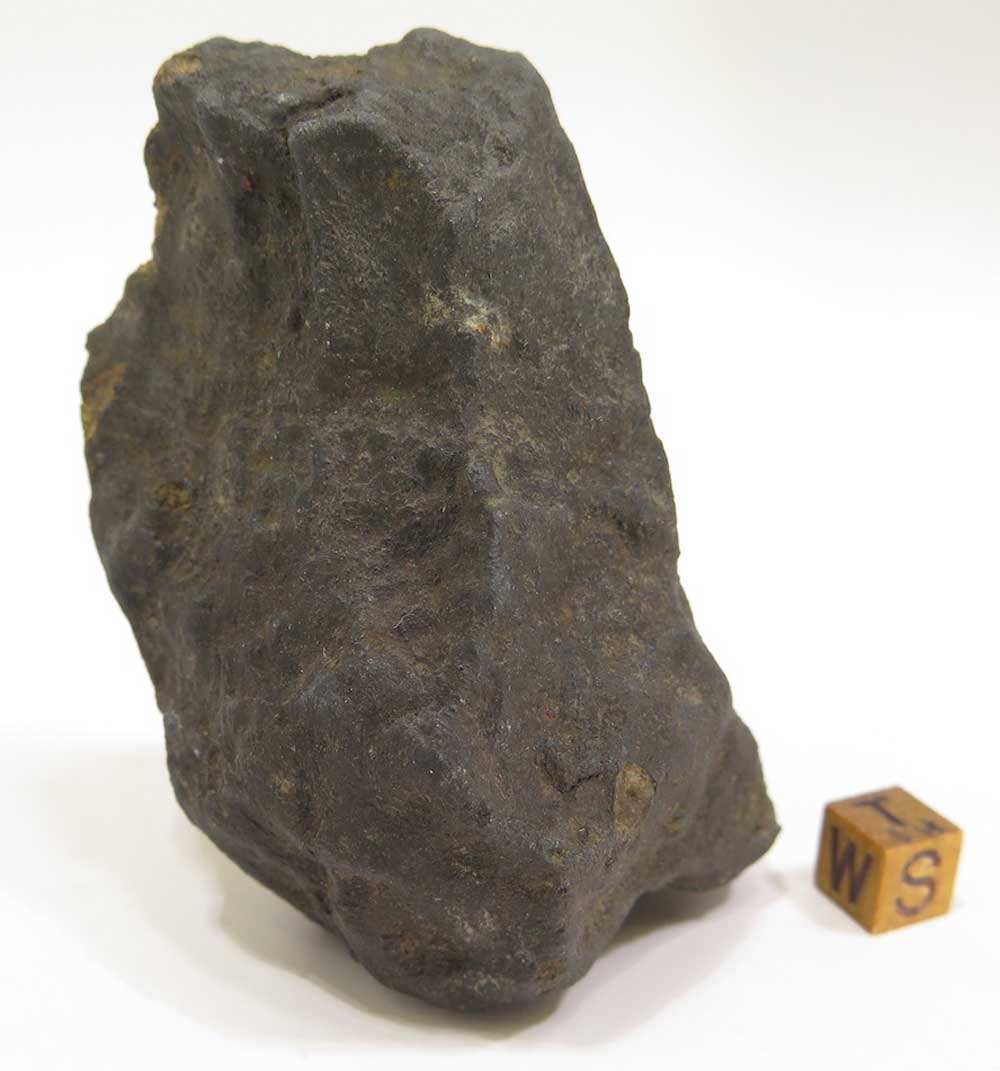 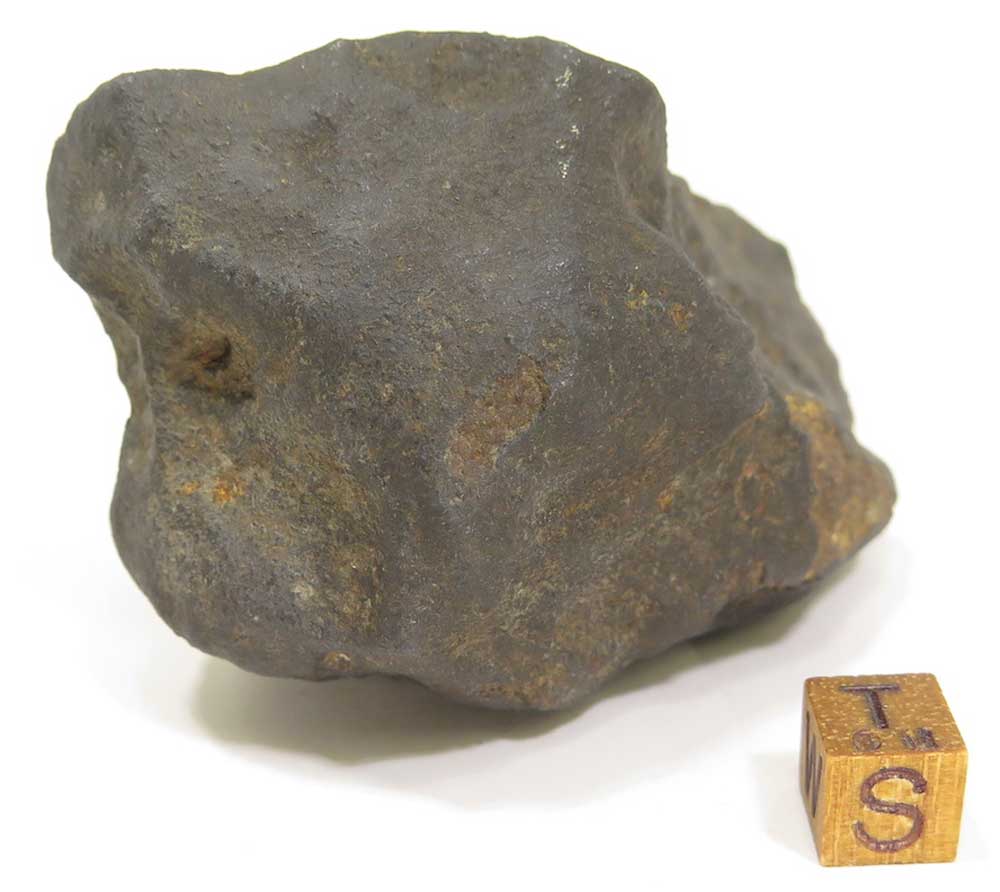 A detailed tome addressing Iowa Meteorites was published by Larry Kelsey in 1985. Here’s a link to that article.

As the years between acquisition of a specimen and today stretch into decades, I appreciate the meteorites in a different light. Forest City is a good example of this. Although the fall was large and well distributed, it, once a staple for beginning collectors, is now rare with complete individuals nearly impossible to add to one’s collection. So I guess it makes sense to sometimes sit back and wait 20 or 30 years before truly understanding the position a meteorite holds in a personal collection.

Dr. Martin Horejsi is a Professor of Instructional Technology and Science Education at The University of Montana, Missoula. A long-time meteorite collector and writer, before publishing his column "The Accretion Desk" in The Meteorite Times, he contributed often and wrote the column "From The Strewnfields" in Meteorite Magazine. Horejsi is also the Lead Technology Reviewer for The National Science Teaching Association, and just celebrated his 22th year working with NASA and the JPL in education and public outreach (EPO), and is a NASA Solar System Ambassador. Horejsi specializes in the collection and study of historic witnessed fall meteorites with the older, smaller, and rarer the better. Although his meteorite collection once numbered over a thousand pieces with near that many different locations, several large trades and sales and trades have streamlined the collection to about 250 important locations with all but 10 being witnessed falls. Many of the significant specimens in Horejsi's collection are historic witnessed falls that once occupied prominence in the meteorite collections of Robert A. Haag, James Schwade, and Michael Farmer. Other important specimens were acquired through institutional trades including those from The Smithsonian Institution, Arizona State University, and other universities. Horejsi was awarded the Harvey (Nininger) Award in Tucson in 2006, The Brotherhood of Guardians of the Ensisheim Meteorite in 2011, a JPL Inspiration Person, on the JPL STARDUST Team that was awarded the Smithsonian Air and Space Museum Annual Trophy in 2008, and former board member of the International Meteorite Collectors Association, and the Northwest Council for Computers in Education.
PrevScience Fiction Films and Meteorites
Gold Basin L4 MeteoriteNext