News from the Wide World of Meteorites

Almahata Sitta is 10 years old! It was the first meteorite to be identified as such before it even hit the ground. The story has been told many times but it is worth repeating. On the night of October 6, 2008, Richard Kowalski was the Catalina Sky Survey astronomer on duty under the dome of the Observatory of Mt Lemmon, just north of Tucson Arizona, went he spotted a small asteroid on his scope and alerted other observatories around the world. By morning the exact place and time of impact had been computed. They were right! It fell exactly where and when expected, a Historical First, but it fell in northern Sudan, just south of the border with Egypt and east of the railroad that links Egypt to Khartoum, the capital of Sudan.

By December NASA scientists working with a University of Khartoum scientist and students, searched the area and recovered hundreds of fragments, which turned out to be mostly ureilites.

Then in the summer 2009 Siegfried Haberer and his team finally received visas and permission to enter Sudan and look for the meteorite. They drove to the small village of Almahata Sitta (Station 6) along the railroad track and then headed east through a dry empty landscape of sand dunes. After several days of searching, they eventually found the large strewn field.

The meteorite had obviously exploded in many mostly small fragments. Siegfried and his team gather what they could and took them back to Germany where they were analyzed and classified by Dr. Bischoff at the University of Muenster. He made a remarkable discovery, this meteorite was in fact an amalgam of many very different lithologies. This meteorite is really unique and historic in so many different ways.

Here is the first message I received:
“Hello Monsieur Luc Labenne, I am in Madagascar, and I received your contact information from a family of close relatives living in France. During the lunar eclipse in the evening of Friday July 27, 2018, a meteorite fell just before the complete eclipse near a village in Madagascar. Happily, my friends and colleagues from work had the good luck to see both marvelous spectacles and we are now in possession of several whole fragments of that meteorite. If you are interested, please know Monsieur Luc Labenne that we are looking for someone with knowledge of these space jewels. I will await your response and hope to hear from you very soon”.

The villagers thought that these were pieces of the Moon, for them it was the Meteorite of the Eclipse! It was quite a while before they understood and accepted the fact that these were not pieces of the Moon, and that the prices could therefore not be “lunar”. This writer then sent the bill for a water pump for the village and then for some solar panels that he wanted to buy because the village is poor and quite isolated.

And that is how I acquired this meteorite. The classification will be done by Brigitte Zanda with the Musee d’Histoire Naturelle in Paris, it is pending, but it is probably an ordinary chondrite L6.

A meteorite hunting operation during 2018 (organized in several campaigns) by Pierre Antonin and Alain Gallien has led to the discovery of an important fall site of a metallic meteorite at St-Aubin in the Aube department of north-central France.

The discoveries and recovery of fragments from this impact took place between the end of March and the beginning of October.

The meteorite hunters used an experimental detector that enabled them to identify the meteorite’s elliptical strewn field that includes 123 points of impact, for a total mass of at least 6 tonnes recovered from the soil.

The extent of the ellipse covers no less than 1100 m in length and nearly 900 m in width.

The most remarkable part of the discovery occurred on Wednesday, 3 October, when the team unearthed a monster of 477 kg, which was then carefully extracted by Pierre. The impact event is dated to 55,000 ago, according to the first estimates made by the Centre de Recherche et d’Enseignement de Géosciences de l’Environnement (CEREGE) of Aix-Marseille and published by them in 2015.

The team identified the large fragment as the principal mass in the elliptical strewn field. This auspicious discovery was appropriately celebrated with champagne toasts by Pierre, Alain, Emmanuel, Brian and the happy owners of the property where the meteorite was found.

Metallographic and chemical analyses that I performed show that the mass belongs to the Saint Aubin meteorite, whose first fragment was discovered in 1968.

It is an octahedrite that has beautiful Widmanstätten patterns that are typical of ferrous meteorites. Analysis by X-ray fluorescence indicates that the composition is nearly 11% nickel with a little cobalt (0.7%) and phosphorus (0.1%).

I first began studying this meteorite in 2002 as part of my company EMTT and at the time I had verified it as the third largest French meteorite, with a total known mass of 525 kg. Three articles about the meteorite have been published in SAF’s magazine l’Astronomie.

However, taking into account the latest discoveries, as well as other fragments found by the landowners, we reach a final mass that has increased significantly to nearly 7 tonnes. We can therefore confirm today that this is the biggest meteorite to fall on French soil, beating the previous record held by the Mont Dieu meteorite (1.1 tonnes, estimated from a principal mass of 435 kg).

The principal work of the discovery, the definition of the elliptical strewn field and the initial laboratory analyses will be published for the first time by the search team as co-authors, in association with SAF’s Meteorite Commission, in l’Astronomie magazine next year.

Finally, the team is composed of four passionate individuals who not only have complementary skills, but also share a team spirit that is indispensable for the success of such an operation.

Pierre Antonin: the inventor of the detection system that made this incredible discovery possible, and team leader of the prospection and extraction activities.

Alain Gallien: for the logistics, relations with the landowners, support for the prospection and the work of scouting the terrain. He also undertook advance preparatory work for the search with Pierre Antonin.

Brian Barret: For the aerial photography by drone, photographs, video and film editing.

Emmanuel Dransart: For the studies of the terrain, metallurgical and mineralogical laboratory expertise.

There was also our colleague André Carpentier who had participated in the first campaigns and supported in terms of transportation and reconnaissance of the terrain.

We also wish to note that all of the discoveries were made as part of a private initiative, using our own funds and on land belonging to private landowners without whose support this operation could not have been undertaken. We most sincerely thank them.

Taking into account the importance of this discovery, a significant donation is planned to be made by the discoverers and the property owners to the collection of the French Museum national d’histoire naturelle, the museum with which we are in contact and which possesses the most important collection de meteorites in France.

In May 2012, Jay from Indiana was visiting relatives near Yuma Arizona when he decided to hike up a ridge in the Gila Mountains, just east of the city. Half way up the mountain he noticed a dark rock. It looked like many other rocks on that slope and still it was different so he picked it up and studied it a moment. It was heavy and he still had a long way to go. He went looking for a place where he could leave it and still be able to find it again. There were only 3 large cacti in the area, probably saguaros. He chose the middle one, the one with 3 arms, and carefully deposited his rock there.

The hike to the top and back took a great deal longer than he expected and it was night by the time he came back down. The nights are very dark in the desert and he could not find his cactus again. Guided by the glow of lights in town he made it all the way down the mountain and home. But he was determined to get that rock so the next morning he went back up, and this time he found the cactus, and the rock.

Still intrigued, he decided to keep it and take it home to Indiana. Once there, he took it to the University of Notre Dame, where the Earth Sciences department confirmed that it was a meteorite. They cut off a small corner and sent it to the Royal Ontario Museum in Toronto, Canada, for formal study and classification. It is an Ordinary Chondrite H4, and is now listed in the Meteoritical Bulletin database.

I am happy to present to you: Gila Mountains: 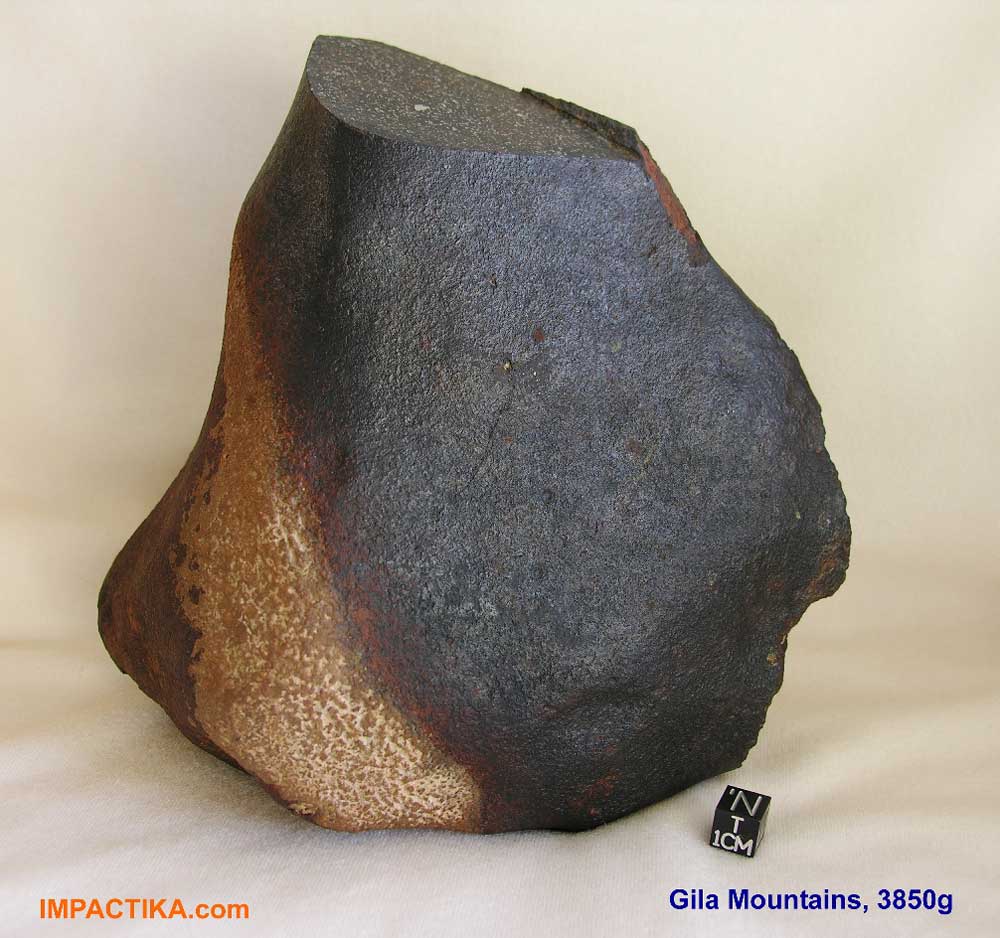 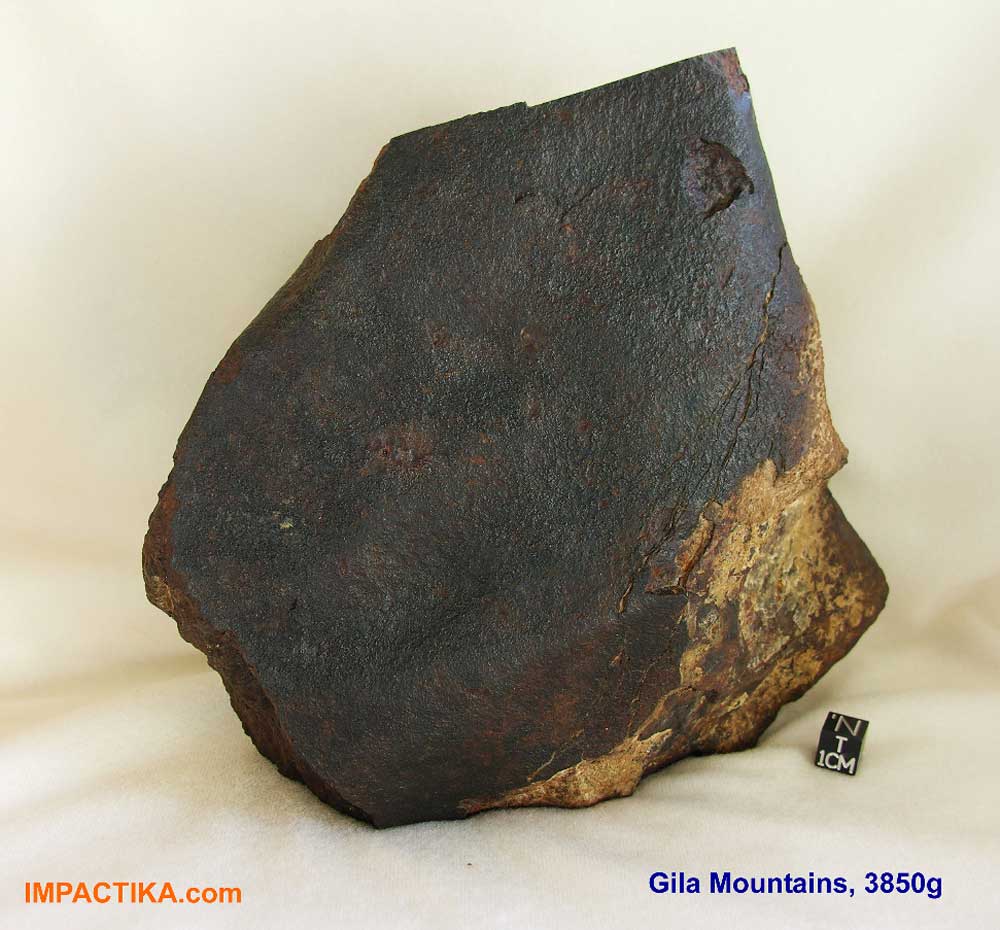 Notes to Readers:
This is a first.
Will there be other News article? It depends a lot on you. I do my best to keep up with what is happening in the World of Meteorites, but I can’t possibly see, hear everything. Please, if you would like to help me spread the News, tell me what you see and hear. Email me! And I will contact you if I believe it is worthy of Meteorite-Times.

I am a French-native, who moved to the States many years ago. Being in Colorado, I discovered the Denver Mineral Show, and I met Dr Alain Carion, the French expert and I started helping him during the Denver Show. Eventually he got me interested in meteorites but I really learned all about them when he asked me to translate his book “Meteorites” into English. That led to many new things: translation of his second book on meteorites, of various articles and most of all it lead to the creation of my website: IMPACTIKA.com in 1998. As a full-time meteorite dealer I now attend the shows in Denver, Ensisheim and Tucson where I have my own showroom. Along the way I also participated in the creation of the International Meteorite Collectors Association, where I was elected and re-elected President, and wrote many articles that you will find on Meteorite-Times.com.
PrevNew Meteorite Books on Amazon
CAIs in FERMO: an unusual aspect for ordinary chondritesNext