Meteorites 2017: A Curiosity of Proportions

2017 was an interesting year from any perspective, meteorites included. But then again meteorites are always interesting so anything they touch becomes a curiosity as well.

A few notable meteorite “things” caught my attention and here’s the short list. The first thing is that the top hits on Google for “meteorite” no longer begin with science but rather marketed products. The top Google-supplied shopping images include Amazon.com, a jewelry retailer and etsy. Prior to the search I would have figured eBay would be the top meteorite shopping hit, but no, eBay is the sixth shopping hit if one continues to dig. 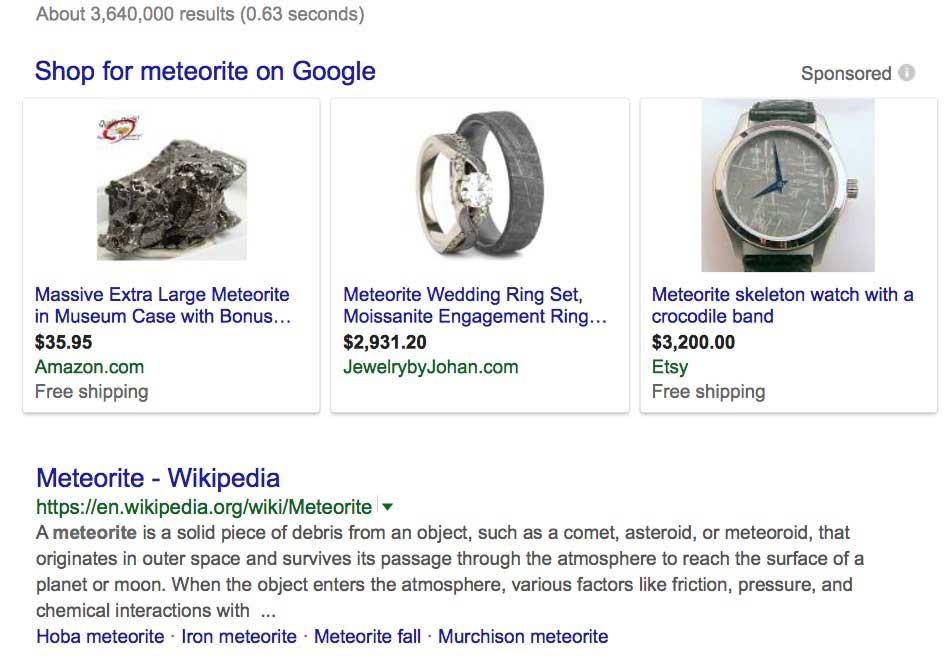 Second, Amazon.com has become a fairly large vehicle for the sale of meteorites as well as meteorite-themed products. Call me old, but “massive” seems to be a little smaller these days, especially for a highly treated and tumbled Campo del Cielo. 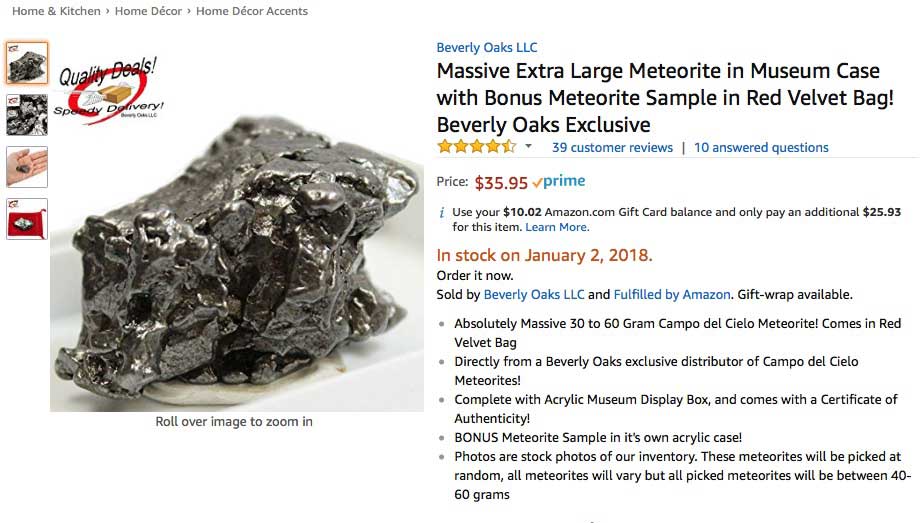 Also on Amazon was a dog tag-shaped slice on a chain. A company called Starborn is marketing the etched Seymchan. As a pallasite, Seymchan has two main flavors, traditional coarse octahedrite, and traditional olivine-rich matrix. My first concern with a wearable dog tag of meteorite iron would be durability. Oxidation from sweat is always a concern with meteorite jewelry but no worries, Wikipedia put my concerns to rest with the simple line in the Seymchan entry: “Seymchan is considered a stable and rust-resistant pallasite.” So it must be true.

Also on Amazon is a “Meteorite Hunting Kit” for $30. What does all that money buy? Well, a telescoping magnet, a dual lens magnifier, and a bottle of “Nickel Alert Detect.” For those of us already flush with magnets and magnifiers, the Nickel Detect solution is also available on Amazon for $23 for 7.2ml. 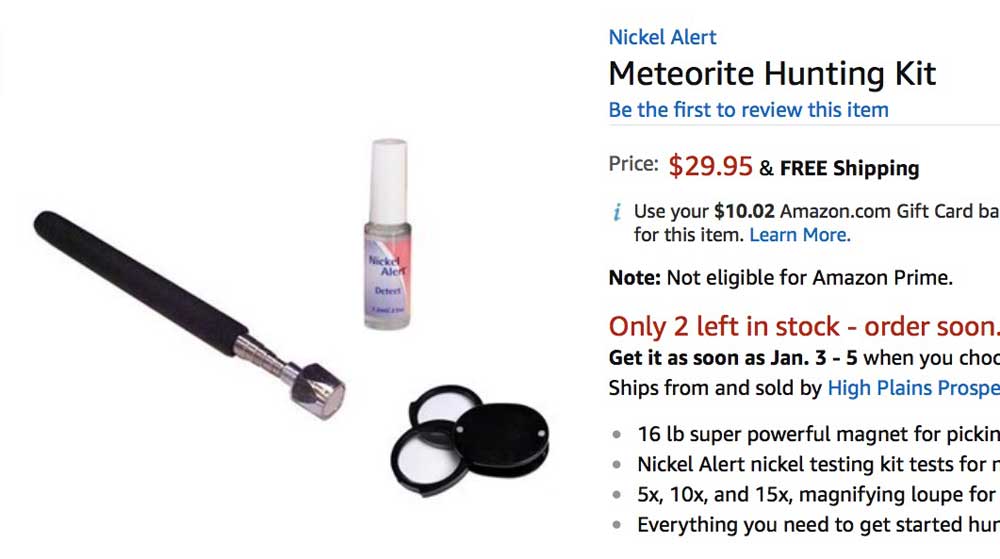 Two more Amazon offerings include an Herb and Spice grinder with a lid laser-etched with a childlike line drawing of what a meteorite in space might look like. Also on Amazon is a box of Double Bubble bubble gum labeled “Meteorite.” Presumably there is no actual meteorite in the gum since the FDA might have something to say about that, as well as the American Dental Association. However, since much of the labeling on the box of meteorite bubble gum is in Spanish, perhaps Americans are not the primary customers. The blue colored blobs are literally “acid with a liquid center,” just like a real meteorite (with acid meaning sour and a strawberry flavoring). 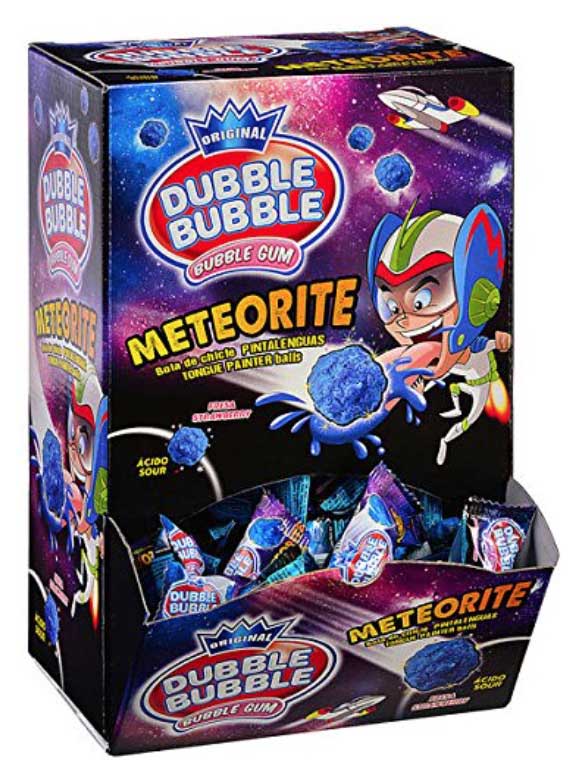 So with meteorites trending in other product lines, it’s no surprise that chondrite kitsch wall art would be next. For less than five bucks including shipping you too can have a 3-D wall decal portraying a future meteorite. When tilted appropriately, the deep space gash in your wall can take on an incoming bolide appearance which is especially important when trying to induce nightmares in your child’s play room. 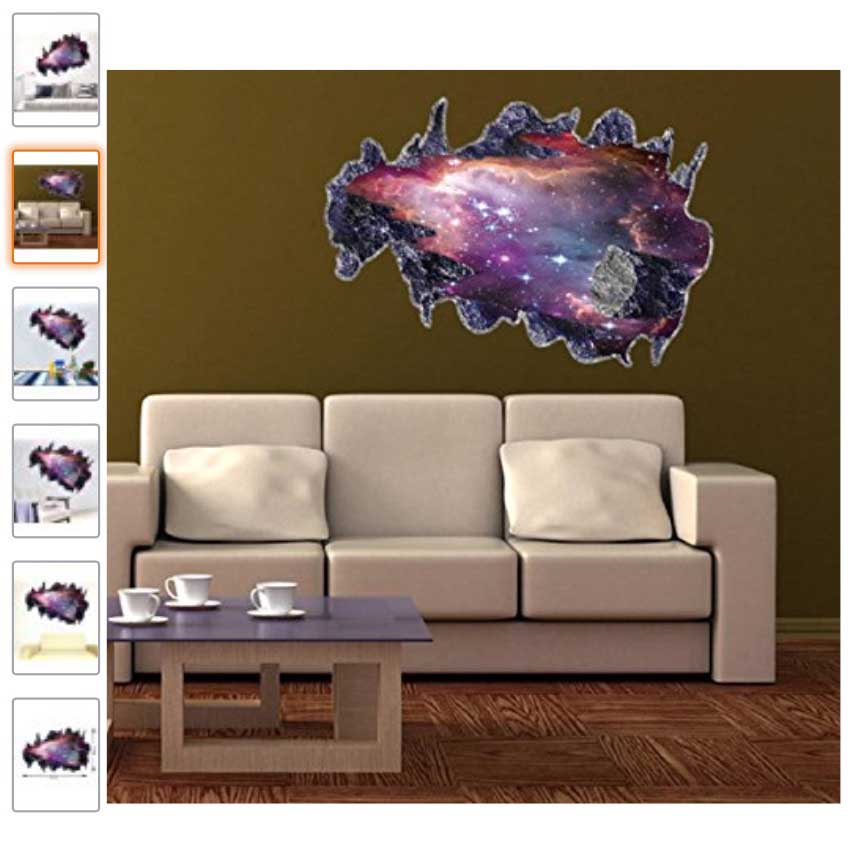 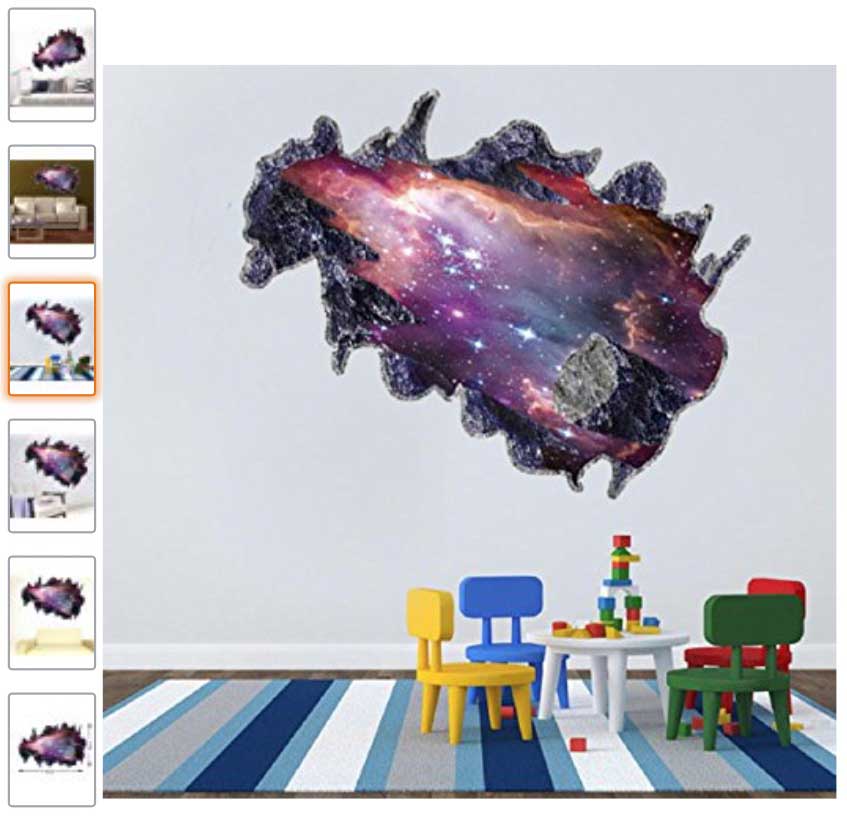 While Amazon might be the household name in meteorite gifts and jewelry, Etsy takes the cake with over 6700 hits for the word meteorite. Etsy is where you can sell “handmade, vintage or craft items.” The breath of Etsy’s meteorite offerings stretches from >$1000 rings to individual meteorite specimens as found. I guess it is the latter category would would qualify as vintage. 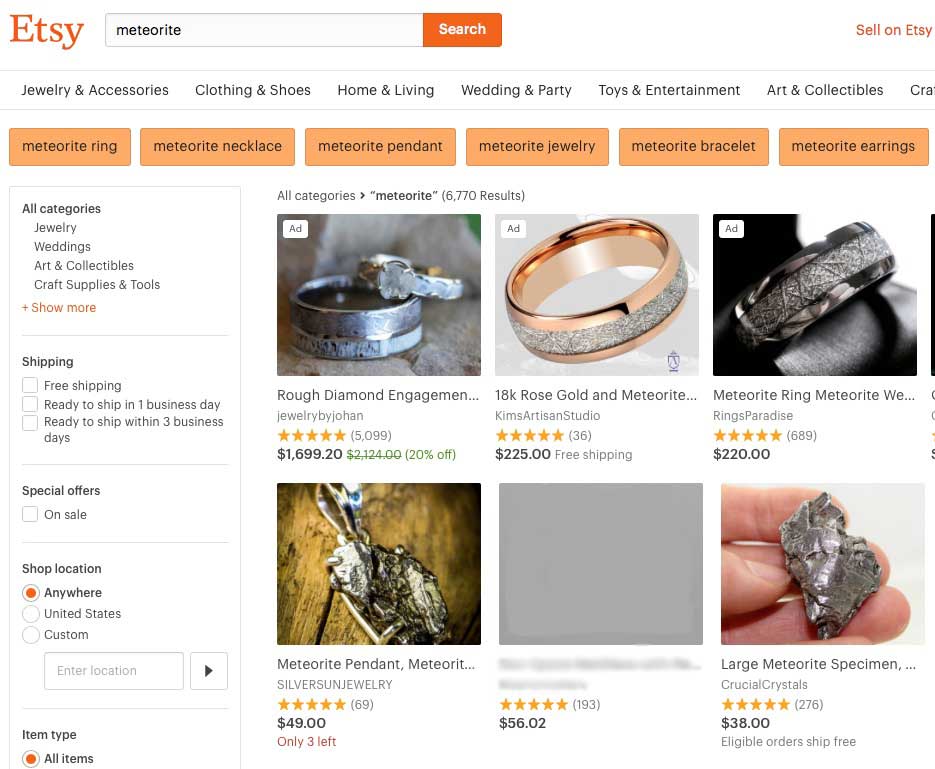 The list of discriminating meteorite collectors who use Etsy to enrich their collections is apparently not my usual crowd of academics. For instance princessangelina526 bought a large (46 gram) piece of “Real, Natural, Campo Del Cielo Fragment, High Quality Collector Grade Meteor Specimen.” So thrilled was princessangelina526 that she posted on November 14, 2017, “Amazing! This piece came from the universe to my hand! I am overwhelmed! Cool!” The princess is right, however, the large piece of real Campo did come from the universe.

One of the oddest entries into the meteorite fray is none other than Kentucky Fried Chicken or KFC as they rebranded themselves since “fried” became a five-letter four-letter-word in fast food. For a mere twenty thousand dollars (yes, $20,000) you could have been the proud owner of a nine-and-a-half-pound Chicken Zinger Sandwich-shaped meteorite. But unlike the meteorite bubble gum, this meteorite delicacy is not for human consumption (as noted in the description). 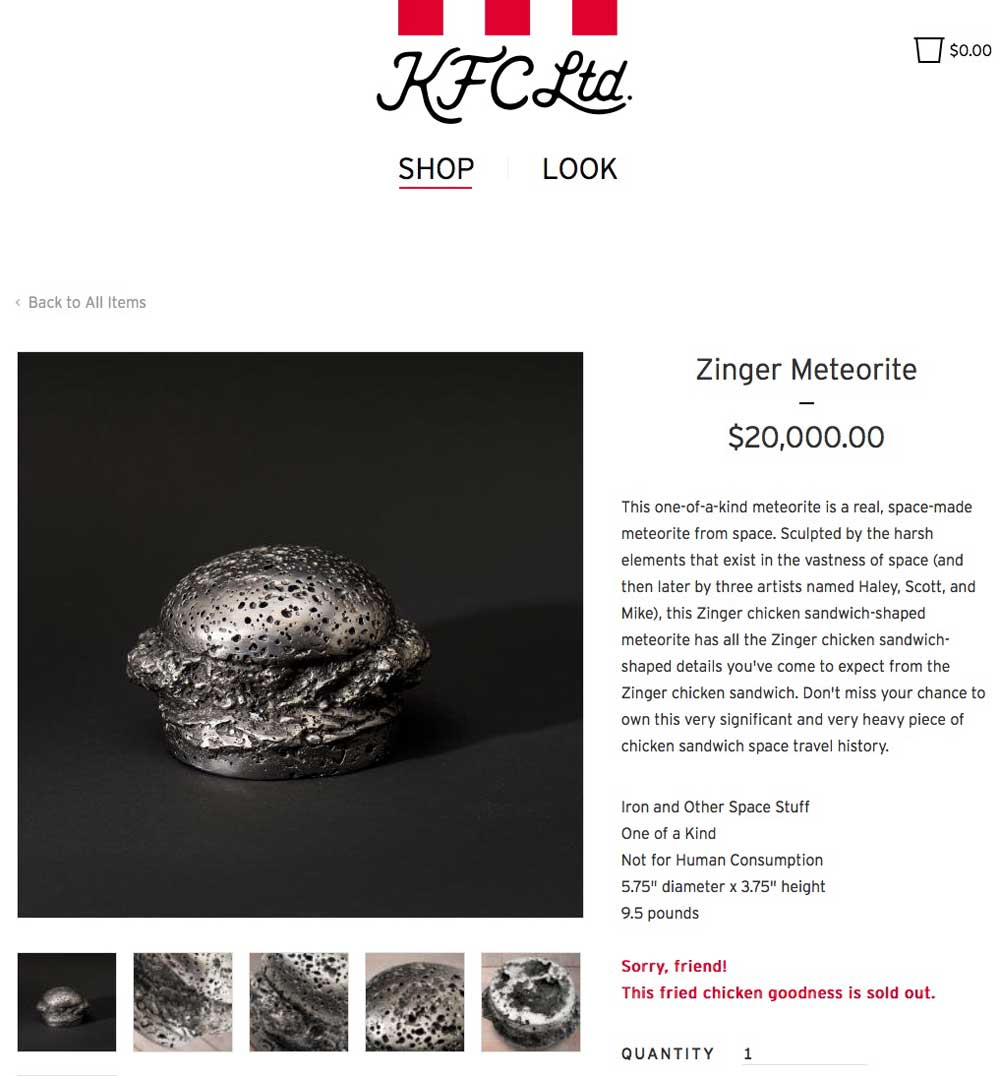 At this point I was a little confused as if the word meteorite still meant the same thing it did when I started collecting them. So a quick stop by the Urban Dictionary answered the question. Of course a meteorite is a meteorite… as well as a few other things. Here are two of the alternative definitions that are mildly appropriate to show here. If you are truly curious, you can look up the third non-traditional use of the word meteorite yourself and only in the company of adults. 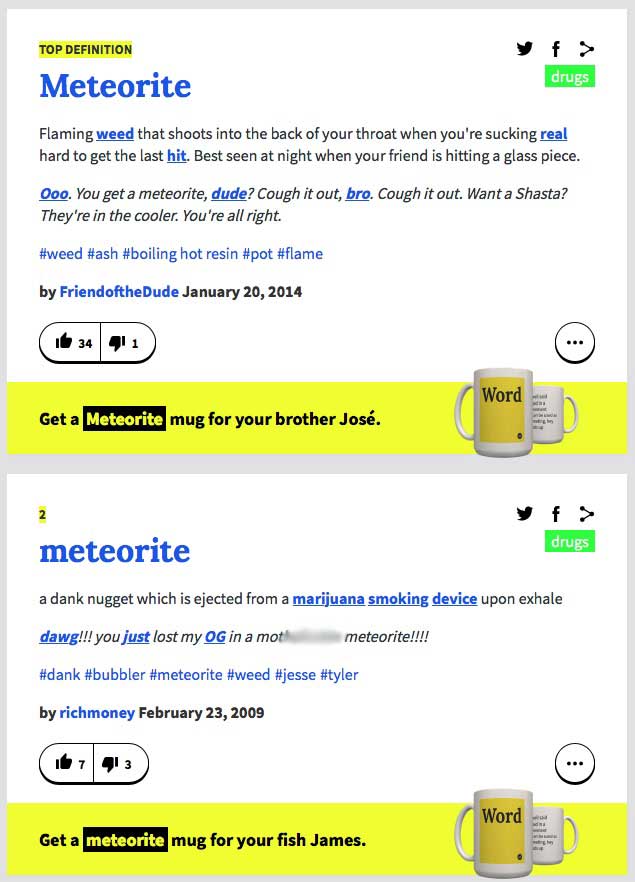 It seems in 2017 that a whole new concern about the value of a meteorite surfaced. The worry is that if NASA found a way to drag a minor asteroid named 16 Psyche back to earth for mining, the iron alone could be worth ten-thousand-quadrillion dollars which of course would collapse our global economy currently worth only a paltry seventy-three trillion dollars. At the moment, however, I’m not too worried because the likely market price for iron would drop to tons per penny with that kind of surplus, and the unintended damage of landing 16 Psyche on earth would be a boon for all other sectors of the economy. But just a heads up NASA, although the Iron Age has not technically ended since its start around 600 BCE, I imagine a 10,000 quadrillion dollar influx of iron would pretty much usher in the new age of Steampunk. Now that would make it worthwhile. 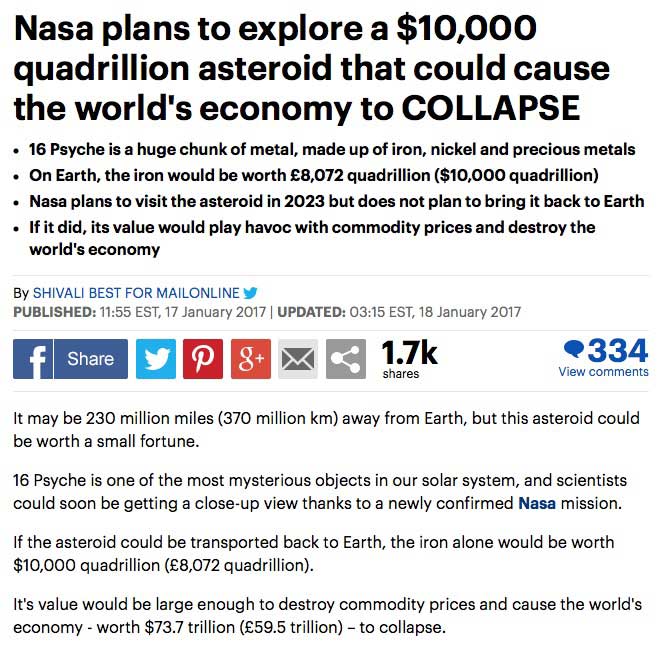 Shortly after the 16 Psyche news broke, The Economic Times (indiatimes.com) made a list titled, “A look at five biggest meteorite crashes of all time.” Topping the list was Ensisheim, which did actually crash, but biggest? Figuratively perhaps. Second on the list is Murchison. Again, a figurative crash, mostly of traditional science. Third is Allende which could be considered the biggest meteorite crash of all time if measured in kilotons of scientific papers and journal articles. Fourth is Chicxulub illustrated with a visual of Canyon Diablo. And the final and most surprising entry on the list is Orgueil. which “crashed in southern France as a fireball on May 14, 1864.” Crashed as a fireball? Hmmm. 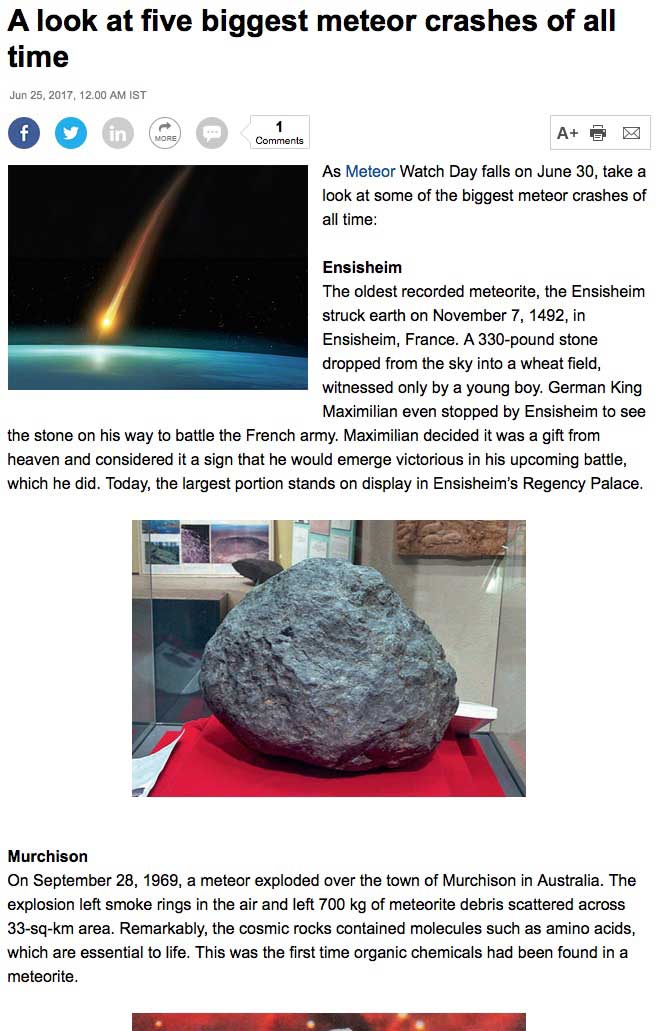 The last entry in this list of meteorite curiosities is one of poll results. Seems a third to a half of all 18-35 year old people would rather a giant meteorite slam into the earth trigging an apocalypse than to have either of the two major party candidates win the 2016 US presidential election. I know that particular news a year old, but apocalypses are kind of a big deal. 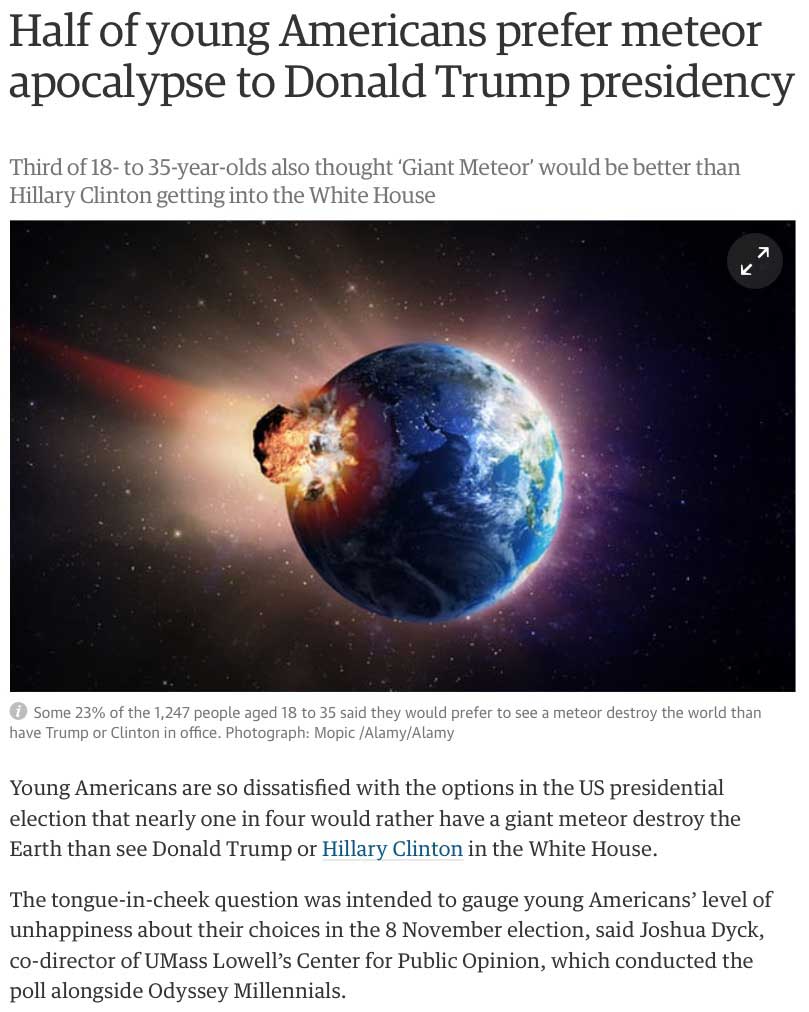 So with that, let’s welcome in a new year. Apocalypse or not, it will no doubt be a curious one too.

Dr. Martin Horejsi is a Professor of Instructional Technology and Science Education at The University of Montana, Missoula. A long-time meteorite collector and writer, before publishing his column "The Accretion Desk" in The Meteorite Times, he contributed often and wrote the column "From The Strewnfields" in Meteorite Magazine. Horejsi is also the Lead Technology Reviewer for The National Science Teaching Association, and just celebrated his 22th year working with NASA and the JPL in education and public outreach (EPO), and is a NASA Solar System Ambassador. Horejsi specializes in the collection and study of historic witnessed fall meteorites with the older, smaller, and rarer the better. Although his meteorite collection once numbered over a thousand pieces with near that many different locations, several large trades and sales and trades have streamlined the collection to about 250 important locations with all but 10 being witnessed falls. Many of the significant specimens in Horejsi's collection are historic witnessed falls that once occupied prominence in the meteorite collections of Robert A. Haag, James Schwade, and Michael Farmer. Other important specimens were acquired through institutional trades including those from The Smithsonian Institution, Arizona State University, and other universities. Horejsi was awarded the Harvey (Nininger) Award in Tucson in 2006, The Brotherhood of Guardians of the Ensisheim Meteorite in 2011, a JPL Inspiration Person, on the JPL STARDUST Team that was awarded the Smithsonian Air and Space Museum Annual Trophy in 2008, and former board member of the International Meteorite Collectors Association, and the Northwest Council for Computers in Education.
PrevQuitovac a New Mexican Meteorite
Parnallee LL3.6 MeteoriteNext