John Shaw and the Tagish Lake Meteorite: “Boy, that was close!”

The 21st century began with a bang over Alaska and Canada. Just over two weeks into the new millennium, an amazing specimen of carbonaceous space science landed on a frozen surface preserved about as well as anything could have been outside crashing through the roof of the Lunar and Planetary Lab at Johnson Space Center during a tour by top meteorite scientists.

But let me back up for a second and begin at the beginning. A few weeks ago I was at a family barbecue in Anchorage, Alaska. My wife and I had planned a trip up north in our pickup camper but Covid put a hard delay on that for a couple years. Anyway this summer we finally spent a month on the road and would do it again in a second! In fact, even though we drove over 6000 miles with the highest gas prices in history, we began planning our next trip north before we even got home.

But I digress. Back to the barbecue…In Attendance was my brother-in-law’s father-in-law, John Shaw. As the informal dinner progressed and the lawn chairs moved closer together, someone mentioned that I happen to like meteorites. Not an unusual introduction to my passion, nor was the immediate reply by John that, “I almost got hit by one,” an unusual response to the announcement. I actually hear that reply quite often to the point that I am disappointed when nobody jumps in with a close encounter story. My immediate followup question to such encounter stories, which usually stops this tangent in its tracks, is “What did it sound like?” Typically that question elicits a deer-in-the-headlights stare, but not for John. Rather, he lit up recalling the two-decade old event, describing what he heard as, “A snowplow on pavement.”

When meteorites fall, they tend to make noise. Often a lot of noise. And throughout history, witnesses describe that unfamiliar noise in the form of a familiar comparison. It is that specific sonic comparison I am most interested in because it usually has two defining characteristics that really defines its authenticity. First, the sound is compared to something relevant to the time-period. Meaning it makes sense given the point in time of the witness’ life. A witness 1000 years ago might have described the sound as thunder. 500 years ago it may have sounded like horses stampeding. 200 years ago, cannon fire. 100 years ago it might be any of the preceding comparisons in addition to mechanical, chemical, or biological, such as a buzz saw, dynamite exploding, or stampeding cattle. So when John said “a snowplow”, I took his words seriously and immediately felt confident this was a real witness event.

John, comparing the event to a snow plow, was also a including a place reference. This was not a little electric snow plow clearing the white fluff off a sidewalk. This is Alaska in the dead of winter. We are talking about a two story tall orange dump truck with a giant bulldozer-like blade scraping the ice off a full traffic lane while at highway speed. Having heard such a sound many times, it is very likely my brain would have gone to that same vision, especially since John was walking down a road in Haines, Alaska in the morning on that January 18th. As the crow flies, Haines is just a neighborly 87 km (54 miles) from where the Tagish Lake meteorite landed.  Remember that when we are that far north in winter, daylight is scarce. Even down here in Montana at that time of year, the sun struggles to climb over the mountains at nine in the morning. So it’s doubtful there would be any sunshine to speak of at a quarter before that in a time zone further west. 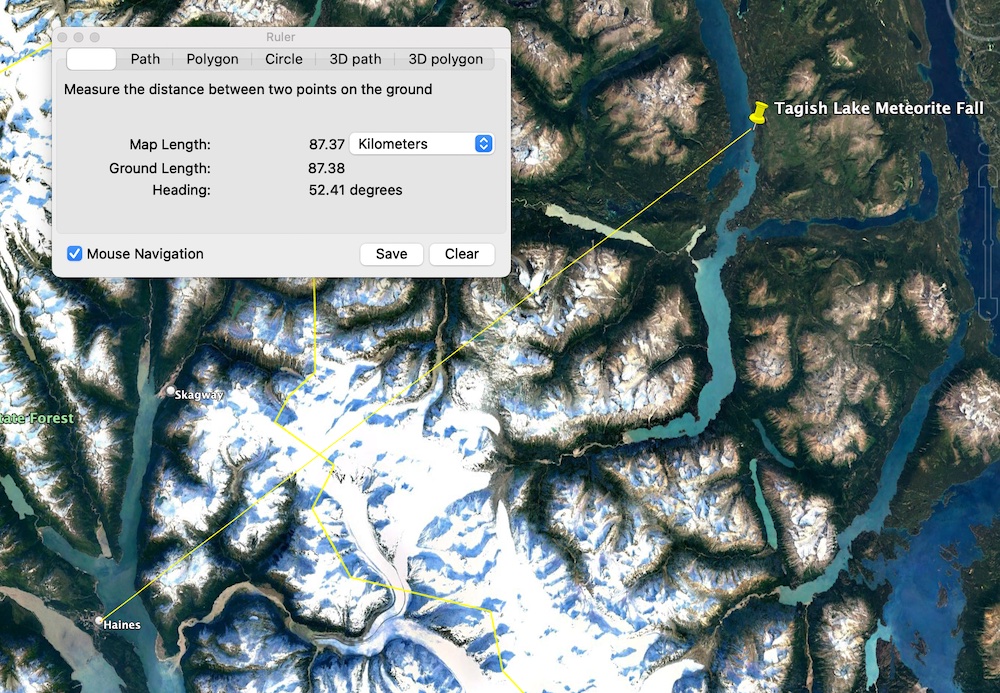 Tagish Lake is a very long, very narrow lake. Stretching out over 62 km in length while only 2 km wide, one could consider it a small target. I, however, prefer to think of Tagish Lake as a cosmic runway that when frozen would make the perfect landing site for an out-of-control chunk of space debris. The two arms of Tagish Lake stretch into different Canadian Provinces with the Windy Arm reaching into the Yukon, and the Taku Arm firmly planted in British Columbia. Itwas upon the Taku Arm that the meteorite fragments fell.

The Tagish Lake meteorite was later determined to be an ungrouped Carbonaceous Chondrite, type C2. For more details on the mineralogy of Tagish Lake, please see this article.

If you happen to subscribe to the statistical possibility that you are breathing in Caesar’s Last Breath, you might also find comfort knowing that you could also be inhaling microscopic fragments of the Tagish Lake meteorite since it is estimated that the original pre-atmospheric mass was 56 tons. Of that, about 1.3 tons survived ablation, only to be blown to pieces and much of that vaporizing in the atmosphere. A scant 10kg was recovered. Further evidence for this tangent of inhaliation reasoning is that noctilucent clouds were still visible hundreds of kilometers away, even 12 hours after the event.

Let there be light!

John Shaw described more than sound. He experienced a light show in the sky as well. Having personally witnessed a massive fireball myself (the Great Teton Fireball of 1972) I can relate to the visual description with confidence. The photons hitting John’s retinas that morning caused a similar time period analogy. Remember that snowplow making all the noise? Well, imagine it crashing into a streetlight and causing a colorful dimming and brightening purplish glow. At this time of morning the streetlights in Haines, Alaska were on creating a diffuse radiance in the early morning fog. Due to that ground-based cloud, the exploding luminescent meteorite above John’s head as it crossed perpendicular to the road he was walking on changed both the brightness and color of the fog, It’s easy to imagine John’s visions of the blade on the huge orange truck clipping a streetlight of which many were on with the roads of Haines still in the grip of winter darkness.

Like most Alaskans, and I stereotype here, John set aside the once-in-a-lifetime event and went about his work with the pragmatic practicality and focus necessary to survive the winters in The Last Frontier. But a few days later, when the cosmic dust settled on the arrival of the Tagish Lake Meteorite, John got some closure. News reports poured in about the meteorite fall. Tagish Lake was extraordinarily well documented with both human and mechanical witnesses capturing the moment and pinpointing the landing site.

The meteorite fall of Tagish lake was 22 years ago. In that time, John’s kids have married, grandchildren were born. Children moved around Alaska, and summertime gatherings would including ever-changing family members and friends. Then one day in June of 2022, an in-law to-an-in-law drove up from Montana in a truck camper parking in the driveway a house in Anchorage to join in a meal late in the evening, and suddenly the Tagish Lake meteorite was on the menu.

When asked what his first thought was when he heard the news of the Tagish Lake meteorite fall. John observed “Boy, that was close!”

Dr. Martin Horejsi is a Professor of Instructional Technology and Science Education at The University of Montana, Missoula. A long-time meteorite collector and writer, before publishing his column "The Accretion Desk" in The Meteorite Times, he contributed often and wrote the column "From The Strewnfields" in Meteorite Magazine. Horejsi is also the Lead Technology Reviewer for The National Science Teaching Association, and just celebrated his 22th year working with NASA and the JPL in education and public outreach (EPO), and is a NASA Solar System Ambassador. Horejsi specializes in the collection and study of historic witnessed fall meteorites with the older, smaller, and rarer the better. Although his meteorite collection once numbered over a thousand pieces with near that many different locations, several large trades and sales and trades have streamlined the collection to about 250 important locations with all but 10 being witnessed falls. Many of the significant specimens in Horejsi's collection are historic witnessed falls that once occupied prominence in the meteorite collections of Robert A. Haag, James Schwade, and Michael Farmer. Other important specimens were acquired through institutional trades including those from The Smithsonian Institution, Arizona State University, and other universities. Horejsi was awarded the Harvey (Nininger) Award in Tucson in 2006, The Brotherhood of Guardians of the Ensisheim Meteorite in 2011, a JPL Inspiration Person, on the JPL STARDUST Team that was awarded the Smithsonian Air and Space Museum Annual Trophy in 2008, and former board member of the International Meteorite Collectors Association, and the Northwest Council for Computers in Education.
PrevNotkin Meteorite Auction Wrap Up
Canyon Diablo 136.7 gramsNext