Meteorite-Times was blessed with the opportunity to interview Jim Kriegh in October 2006. Jim was loved by all and although now gone he will never be forgotten.

Meteorite-Times (MT) What or who got you interested in meteorites and how old were you when you got your first meteorite?

James (Jim) Kriegh (JK) I was 63 years old when early in 1992 I got interested in hunting for gold with a metal detector. I first went with a friend, John Martin. John Martin and John Blennert regularly hunted together so I was given the opportunity to join them. I was fortunate to be going with such an expert as John Blennert as he soon taught me how to best use the metal detector. As a result of this activity I joined a local gold club. One of the speakers was Dr. David Kring who discussed and described meteorites and indicated he thought that many stone meteorites could be found with a metal detector. I paid attention to what he said and started picking up those “hot rocks”. In 1995 I had several hot rocks that I was curious about so I contacted Bob Haag. Even though I had never met Bob, he was courteous and invited me over so he could look at my hot rocks. I had about 10 to show him and as was usual when people brought him rocks to look at none were meteorites. When he was walking me to my car I suddenly remembered I had a small rock in my pocket that was a hot rock but it was the least likely thing that I thought would be a meteorite so I had kept it separate from the other rocks. I did want to ask him a question about it, however. When I pulled it out of my pocket and showed it to Bob, he immediately said “that looks like a meteorite”. He asked if he could cut it, I said yes and we went back to the house cut it. He identified it as a meteorite and encouraged me to take it to Dr. Kring at the University of Arizona Lunar & Planetary Laboratory. This I did. I gave Bob part of it and, of course, the Lunar & Planetary Lab kept part and I still have a piece of it. It is called the Greaterville meteorite.

(MT) Do you have special areas of interest that you focus on in regards to meteorites (thin sections, photography, chemistry, age dating, etc.)?

(JK) My particular interest is hunting for meteorites. I love to be outdoors and have spent much of my life in the outdoors. I need something to do when I am hiking around so I am always looking for anything of interest.

I do have some thin sections and a microscope that allows me to view them. I don’t really know what I am seeing except that they quite colorful and attractive.

(MT) Does your Family share in your interest in meteorites?

(JK) My wife died in 1991 and that in part got me going out metal detecting. I wanted to keep busy. My children are grown and with their own families. They all express interest in my hobby and are glad that I have such a hobby. My son joined me one day when I was in Gold Basin and he did find a meteorite.

(MT) Do you have any special approaches to collecting? (Type collection, only stones, only irons, only by aesthetics, etc. or any and all that you like.)

(JK) My approach to collecting was to obtain different types. That is the way I have them displayed in my cabinet. There became too many types for me to consider pursuing obtaining new meteorites for that purpose, now it is ones that I just happen to see, like and can afford. 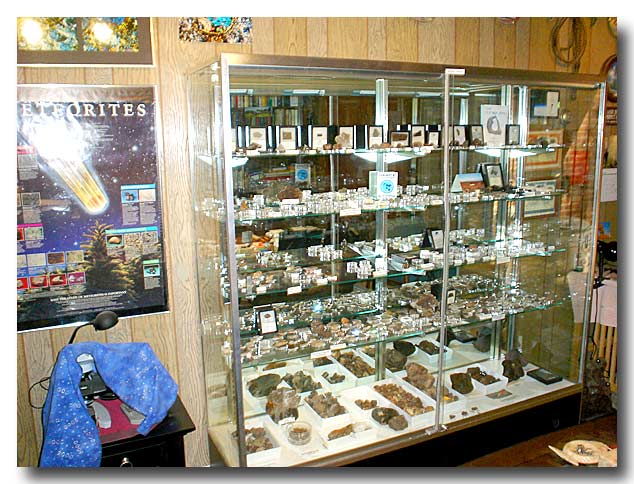 (MT) Do you mind saying how many locations your collection represents?

(JK) While I have my collection recorded I don’t know how many locations they represent. I have meteorites from many different countries. The ones I have found are from Arizona and Nevada.

(MT) In what ways do you use your computer for meteorites?

(JK) I have used the computer to type up my inventory of meteorites, to watch the emails on the meteorite list, to check the sales on Ebay, and to read the Meteorite Times.

(MT) How did you start hunting for meteorites?

(JK) After I had found the Greaterville meteorite, I was hunting for gold with John Blennert in the Gold Basin area during which time I picked up ‘hot rocks’ and brought many home. After cutting the rocks it was discovered that two were meteorites. This was the beginning of the establishment of the Gold Basin meteorite strewn field. For the next two years John Blennert, Twink Monrad and I hunted and mapped the meteorite strewn field. After the two years the find was announced to the public. I do have the first Gold Basin meteorite that was identified. I also have found meteorites at the Franconia Strewn field, Holbrook, Dos Cabezas, as well in select areas of Nevada. I am always looking when out wandering around in the desert.

(MT) What is your favorite meteorite in your collection?

(JK) I have, of course, a certain prejudice for the Gold Basin meteorites and one of my favorites is one that I found in Gold Basin called White Hills which is a mesosiderite. I do like a lot of the others I have as many do have special things to see when you look at them closely.

(MT) What meteorites are currently on your wish list?

(JK) None, unless I could happen to find some of the Tucson Ring.

(MT) What methods have been most successful in building your collection?  (Buying at shows, from dealers by mail, auctions on the web, trading… etc)

(JK) I started my collection by trading Gold Basin with dealers. I occasionally buy over ebay and I generally buy more at the Tucson Gem and Mineral Show.

(JK) I do have tektites, impactite, and shatter cone materials from various sites.

(MT) Do you prepare any of your own specimens? (cut, polish, etch, etc.)

(JK)  I do cut my own specimens and I can etch and polish. I don’t try to polish stone meteorites very often as I like how the surface looks if I cut slowly with my saw. I do polish iron meteorites before I etch the surface.

(MT) Have you had to take any special measures to protect them from the environment?

(JK) My specimens have no special protection for those in my house in the cabinet or for those in the safe. I try to keep them where I can enjoy looking at them.

I want to add that the biggest reward for finding the Gold Basin strewn field has been meeting so many people and developing many new friendships.

Paul is the webmaster for all of The Meteorite Exchange's websites including Meteorite Times Magazine. His fascination with all things space related began as a young boy during the Space Race. His free time is divided between meteorites, astrophotography, webmaster, and the daily operations of the ecommerce website www.meteorites-for-sale.com.
PrevJim Kriegh’s Favorite Gold Basin Meteorite Specimen
Star Poop and Meteoritic Water: The Journey of the Trâpeăng Rônoăs MeteoriteNext