Once in a while something really ugly comes along when you are looking at meteorites for sale. I have learned over the years to not pass them by. I always check them out. There was one in a tent at the last Tucson show that was particularly unsightly. I had no doubt that it was a meteorite, but what kind? I was buying a kilo of the dealers meteorites and getting a fantastic price by last year’s standards. Though it was a lot more than two shows ago. Since there was noticeably less material for sale in tents; I was getting all the unusual material that has gotten mixed in with the 869. I was thinking this was Maybe the last opportunity to get pure fun meteorite material to work with at really low prices. By last Tucson everything was mixed in the boxes and it was mostly larger broken fragments. There was never more than a couple boxes per tent. Beside the fragments there were only a few nearly complete stones and the ugly little thing was complete except for a couple chipped spots. I added it to the kilo of material and paid the dealer. I made my way back across the parking lot to the hotel. I caught up with my friend Martin who was just finishing buying some great Juanchengs he had located. 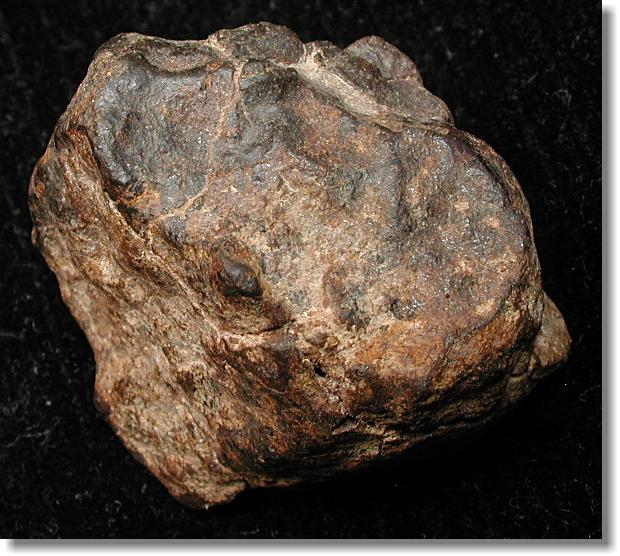 In a sort of “I’ll show you mine if you show me yours” moment we took a look at the morning’s acquisitions. I offered him the ugly little thing and he did not know what it was either. But, like me he noted the high weight for size. I packed it away at our hotel in the evening. I have looked at it several times in the months since the show. Always keeping it on the short list to window when I have a chance.

I am making that chance the topic of this month’s article. I will in the next few moments grind off part of the ugly little thing and see what is inside. We will take this trip together. I have not photographed it until this very second when I am stopping to set up the camera. . . .

I have now taken about a dozen pictures of the stone. I have looked at it carefully with respect to where to perform surgery. There is one naturally flat side on the ugly little thing. If I work on that side there are also no fractures. The other sides have got some cracks. I estimate a lost will be only about one gram to expose the inside. 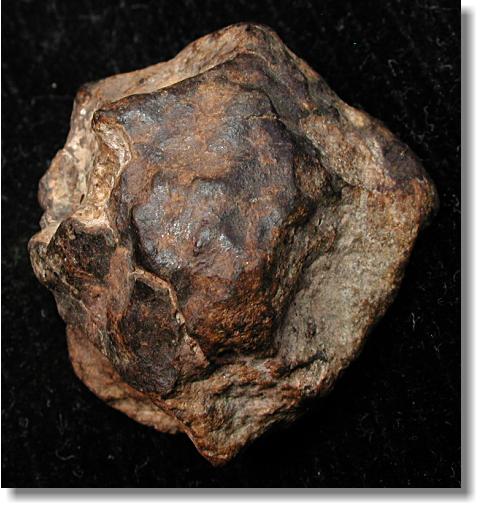 I have not weighed the stone so I will do that now. . . the specimen weighs 31.69grams. I’ll weigh it again just for fun after facing off the side. So it is off to the garage to put the stone on the diamond lap and I will be right back to continue the article. . . .It is five minutes later and I am going to image the face I cut. I ground off a little more than I could have gotten by with. I wanted to get just a little deeper inside.

It is a nice meteorite. The weight now is 30.831 grams and as the picture of the face shows I would really have to go a little deeper still to make a completely clean face. But, I have only used the coarsest of my diamond disks. More will come off later when I finish the face to probably 600 grit.

Here is a summary of what I see in the ugly little thing. It has very little visible metal as grains. The grains it does have are extremely small in size. There are spots in the ground mass where it looks like metal might have weathered away. They could also be spots where small chondrules were ripped out in grinding since it was a 160 grit lap. The ground mass is relatively light in color and not stained with rust. So I tend to think it is not rusted out metal grains that account for the pock marks in the surface.

Even still there would be very little metal if that was the case. Fine grinding will settle that issue later. Either the surface will get perfectly smooth or more tiny cavities will continue to appear. So based on the lack of metal I would place it at either the low metal extreme of the L’s or as I feel stronger about as an LL. The chondrules are varied in size and quite numerous. They are not sharply defined but easy to see. So Maybe its a 5 petrologic stage meteorite. There are a lot of shock veins running through it, so I would guess Maybe a 3-4 in the shock category.

The surface has nice fusion crust which is still very black in some spots. It has not been cleaned in any way. I don‘t know about the rest of the hidden fusion crust yet. The ground mass as stated before is still light in color. There is little or no staining around metal grains and only minor staining along cracks. I would guess at a weathering stage of 2.

Of course since this is all based on visual appearance it could be grossly different from a laboratory‘s results. I could prepare a thin section in about an hour in the garage, but don't want to make the cut on the ugly little thing and lose more material. Hard to explain its hefty feel with that little metal. I had forgotten to mention that a rare earth magnet had only poorly stuck to it. So I had known from the beginning I was not dealing with an H or any mesosiderite. I am always open to criticism on my guessing of class. It is a fun exercise, that I encourage others to try for its instructional benefits. So the ugly little thing like, much of life should not be judged by how it appears on the outside but instead by what is in its heart.

Scale of the Month

This month’s offering is a fairly modern version of the Cent-O-Gram series that has been produced for a long time. There are three beam versions however this is a four beam scale. It has a capacity of only about 300 grams but is a nice balance.