Over the years I have spoken to many different groups about meteorites. Sometimes it is an astronomical society . In that case it is usually a discussion of meteorites and what they are. If the group is treasure hunters or rock hounds then the topic will be weighted more to the finding of the meteorites. Last month I was off work and had some free time. My daughter called and asked if I would like to speak to my grandson’s class. It was easy to say yes.

I had about two days to prepare and that was fine. The hard part was to keep the discussion on a level that third graders would understand. There were not going to be questions about how do radio isotopes get used in determining the origin of suspected planetary meteorites? I figured that the questions would be more like: Are meteorites hot and do they start fires when they land? That question was in fact asked by one of the students. So I chose wording that would be in their experience and kept the topic to the basics.

I was to be part of their day after lunch. They get back from break at twelve and go home at 1:30. I was supposed to talk for 30 - 45 minutes. They kept me their till it was time to leave. I even had older siblings from other classrooms come in with their moms to look at the specimens because they were writing reports on meteorites in their rooms.

I usually take a nice selection of meteorites to the talks. This time I took smaller pieces that would be easier to handle. I did not want the children to drop a two kilo stone on one of their feet. And I had to be a little careful about the magnet I chose. I figured one of my powerful rare earth finger pinchers was a bad idea to give to eight year olds. I picked a small disk magnet about the size of an American dime. It was still quite strong. 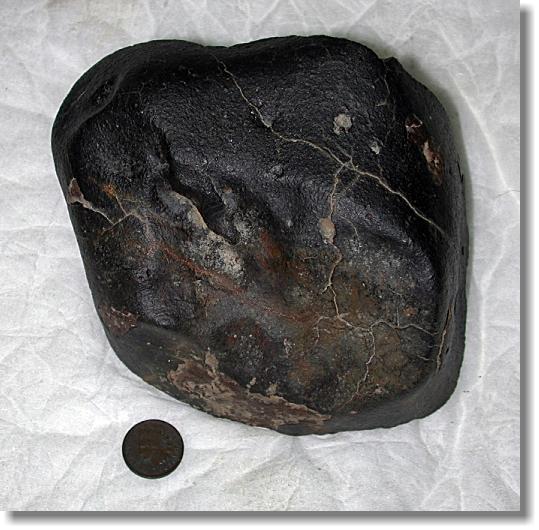 The kids got to see a nice selection of meteorites. I took mostly ordinary specimens. A 300 gram nicely shaped Campo for the iron individual. Three complete ordinary chondrites with small windows and great fusion crust. One an H, one an L, and of course the last an LL. I took some baby NWA 869s so they could see how small meteorites sometimes are. I did take a 2 ½ kilo cut L6 that I left on the table for them to look at after my talk. It has some great regmaglyphs and large easy to see chondrules. I figured they ought to see all the types so I brought along a slice of pallasite for my stony-iron. I did take one nice iron slice that I worried about a little. I was concerned that the handling might force me to rework it. I really liked the job I had done etching it a couple years ago. It is a 118 gram beautiful slice of medium octahedrite. But, it faired well with the children.

I began the talk with defining those three all important words, meteoroid, meteor, and meteorite. There is now at least one group of students that hopefully will write correctly about the rocks we love. The discussion turned then to the types of meteorites, the size of meteorites. How fast they hit the ground and where they land. How they are found was of course an important part. How could I, a devoted hunter not put some of that in the presentation.

I had deliberately decided not to scare them with talk of killer impacts. But, the instructor actually asked a question opening up that fearful topic. I had some aerial photos of Meteor Crater with me. So I told them briefly about impacts and emphasized the rarity of the events. They actually asked to have the crater photographs passed around a second time. I hope someone in the group got inspired. I had been inspired when only a little older to learn about Meteor Crater. I guess I am sort of recruiting an individual to continue on after I am gone.

I gave away a couple of my books to moms after the talk for their older kids in the other class. I left one of my crater history CD’s for the instructor to use in the future. That CD is now in version 5 and much expanded from the version I was selling years ago. I don’t try too hard to sell them except at RTMC, but it remains an ongoing work.

During my time of not working I also finally catalogued my collection. In doing so I was able to consolidate my specimens a little. I got a few Riker boxes back for reuse. I put a nice slice of NWA 869 in one and donated it to the school. It showed the brecciation, had visible crisp chondrules, a good scattering of metal grains, and fusion crust all around. I had bought the material partly to give away just like this. It was happily received by my grandson’s instructor. I imagine it is hard to describe the inside of meteorites to third graders and tell them what a chondrule is. I suspect most elementary school teachers have never held a meteorite themselves.

A couple years ago I spoke to a large astronomical society at a famous local college. It was a real dog and pony show with Power Point slides on the large auditorium screen and projected photos from my laptop. Really nice specimens were shared. About two hundred people in the audience. I enjoyed that presentation more than most. They did as well keeping me there for two hours of questions after my hour talk. They even had an after glow continuing meeting till one in the morning at a nearby restaurant. But, this presentation for my grandson and his classmates was more rewarding I think in some ways. I got to offer my excitement about rocks that did not start out on Earth and had wandered in space since creation; to really eager minds. To provide the opportunity for them to handle meteorites; how cool is that. In general very few people even know you can touch them. I think here is still a widely held belief that meteorites are only in the domain of scientific study and museums.

If you have the opportunity to speak to a group about meteorites, I would always say do it. If you are not comfortable speaking in public, go ahead and try it anyway. The audience is eager to hear what you know and excited to see what you bring. There will never be a more receptive group than those who want to hear about meteorites. The stones sell themselves to the listeners. You just have to speak from your heart about them. The next generation of collectors and scientists are students sitting in classrooms today. We are the ones who can motivate them to love meteorites. Till next month Jim.