Well, it has been a wild ride for many of us. But, it looks like the flood of meteorites from Northern Africa could be turning into a trickle. We have watched as tens of thousands of years of accumulation have been harvested like a crop in a few years.

I saw what was happening when the flood started and said to myself this could be my one opportunity to get some nice complete stones and add a lot of weight to my collection. I had spend decades collecting a piece at a time. Waiting for a specimen I was interested in to come on the market through a museum trade or collection sell. I realized that this NWA material was not classified and was never going to have the required data to get properly catalogued. But, those factors did not diminished the fact that some of this material was beautiful and really nice. Prior to the flood of Saharas and NWAs I had only a few complete stones in my collection. I had some Gaos, Allendes, Holbrooks and some others. A few more rare complete stones too, but now I have jars of complete stones.

We have seen tons (literally) of meteorites for sale the last few years. I wonder what effect the decline in availability of low cost meteorites will do to collecting?

There are still meteorites in Northern Africa and more will still be found. The strewnfields we have seen nearly cleared there will still produce some more specimens. Like Holbrook after nearly a century of hunting produces a few to the diligent and careful hunter. But, the rush is over I think. And unlike the gold rushes of 1849-1910 in America where most of the gold still remained in the ground after the frenzy, I think the meteorites of Northern Africa are truly mostly recovered.

So where now will the next big rush occur? Will these countries learn from the experience of nations in the past? Will they allow for the recovery and export of their meteorites to improve the income of some citizens; at the expense of the nation’s reserve of treasures from space. We have reaped the benefits of the economic realities of the North African region. The recovery and sell of meteorites dramatically changed the lives of some individuals. But Maybe only briefly, and only in certain areas. Countries May well decide that it is not to their advantage to lose their natural and historical heritage for the fleeting financial improvement of a handful of citizens. 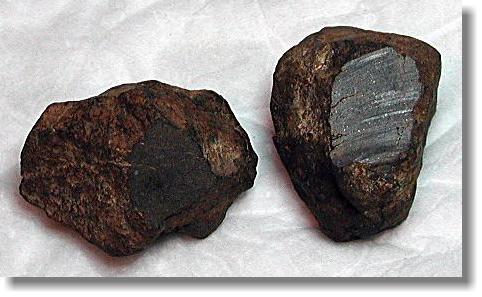 It would not surprise me to see no more meteorite rushes like those of the last few years. What areas are candidates? There are still plenty of deserts and arid regions to hunt. So far some that were thought to probably be as lucrative have not been found to have many meteorites. I was talking to one of the world’s renowned hunters recently and named a few places that I thought would be good regions to hunt. I heard this repeatedly. “We have tried but no meteorites are there.”  Now that does not mean that many will not be found in those place later. But, they have not been found in large numbers yet. I would reason that they are there since I still believe that meteorites fall randomly everywhere. Other factors, including motivated local residents have played an important role in supporting the rush of the past few years. The locals know the territory and there are a lot more of them to search that territory than meteorite hunters.

Until local hunters and gathers of the next crop of meteorites arise in new places it May be that we will have to work harder in our own backyards. For me it is fortunate that the deserts of the Southwestern US are that backyard. They are producing and May well have more meteorites than we can now dream of.

That would be great. For as much as I love to collect and study the specimens I have. I enjoy hunting them with friends and family even more. We are not always successful but we always have a great relaxing adventure. And it is almost the time of the year when we begin to think about where to go in the cooling down of the Fall.

New collectors have had it really easy the last few years. There has been availability of great quantities, ease of finding the specimens that are for sale, and a multitude of sellers. Not to mention the low prices. Will there be a return to scarcity, diminished sources of specimens, and higher prices. I think so; at least until new regions of recovery open up. I think that the strange phenomenon of everyone with three pieces of a particular meteorite becoming a dealer will disappear somewhat also. We May decide that now specimens can not be replaced. Having multiples of them May be good.

It is one thing to think that meteorites are neat and want to have some because they are not really that expensive. It is a far different thing to be passionate about them because they are the rarest material on the Earth with so much to teach us about the creation beyond the surface of our world. I have really enjoyed the last several years. It has been great for my collection. But, I have a few meteorites that are special favorites and they are not among the ones gotten during the frenzied rush. They are specimens I waited a long time for or were given by friends during a life of quiet collecting spanning forty years.

I still don’t have a huge collection. But, I have learned so much and have maintained a high excitement for meteorites during most of my life by just adding selected pieces now and then. In the dim past meteorite collecting was very much an educational opportunity. I researched and read about each of my specimens. Often there was a story of the hunting and finding associated with the specimen. And of course they had a real name. Recently it has been too hurried for that, and the specimens are often not written of in depth. Many not even classified. I have a supply myself to do classifications on. Lots to cut and thin section for years to come. The direction of my collecting May change as I work through this material. I could see a big return to lapidary work which would be fine with me. Only lack of time has stopped that recently.

Will there be a new generation of collectors after the current rush? Will those that bought when it was so easy and cheap continue to work at building collections during lean years that May be coming? I sure could not say. I hope so. The more collectors the better for everyone in the chain we are forging. A chain where the hunter is working with scientists and dealers. Where dealers work with science and collectors. With collectors spreading their excitement to their friends and the general public. It is a system that works most of the time. If it continues it should still be a great hobby for future generations.