Not Just Another Unclassified

I recently received a 1.8 kg unclassified chondrite in trade. It was shaped like a very thick slice of bread and had nothing about its shape to make it special. I put it in the saw and took the thinnest slice off that would leave a nice full smooth surface on the one side. I lost about four percent in that cut since it was too large for my thin bladed saw. It had to go on the ten inch that has a full thickness blade. I use that saw usually for regular lapidary work and not meteorites. Once in a while however, I have to make one cut on it to create pieces small enough for the trim saw with the .006 inch thick blade. 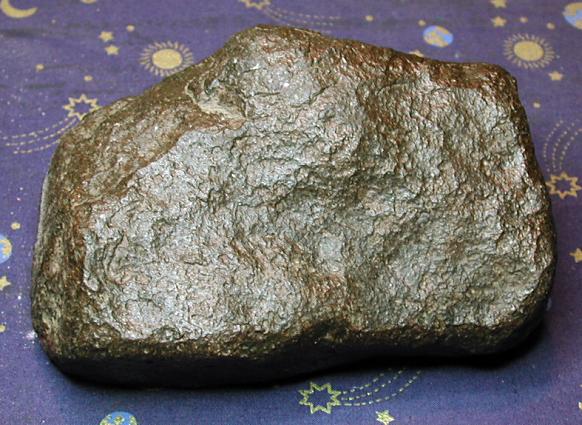 So I ended up with a thin slice from making the clean-up cut. It was not going to be of much use. I would probably not display it when I had the whole large chunk now well prepared. I decided to further cut down the clean up slice. Making some nice smaller slices. There were a couple spots on the clean up slice that were very thin. I even produced a hole in the slice by taking no more than was necessary off the original mass. I decided since it was not classified to make some thin sections from the portions that were already too thin to do much else with.

I could see on the cut surfaces that it was a fairly low petrologic type chondrite. The chondrules were distinct with the naked eye. The chondrules were a variety of colors and of all different sizes. Some actually quite large; around an eighth of an inch across. I was pretty excited about making the thin sections and putting them under polarized light. I really enjoy the exploration of a new meteorite.

It was a fairly weathered stone, though the matrix was only mottled with brown. There was about half of the matrix that was still a gray color. But, it was weathered enough that it lost all its character when even ground to a 220 grit stage. It went complete dark brown. I have left the smooth surface of the large piece at about 100 grit where it shows the chondrules nicer.

Some of the large chondrules were distinct enough to see that they were barred or radial in just the magnification of a loupe. So I was really hopeful that there was going to be something very interesting to see in the microscope after the thin sections were prepared. I made up four thin sections in about an hour. The remaining pictures in this article are from these thins.

There is really no reason for me to send this meteorite out to be classify. It will always be one of the many NWA’s that have poor provenance. Besides, I am satisfied that I know within a small range what the stone is. And I was not disappointed with the results. It was as neat a stone as I thought when I looked with a loupe. As always it was a fascinating journey of discovery. The best part being that I did not have to wait weeks for thin sections to come back. Or for material to be lost, or my thin sections to get sent to the wrong person. Or any of the nightmares that have happened in the past when I sent out for thin section preparation.

I leave it to you to view the photomicrographs and make your own decision as to what you think the classification is. I would be interested in hearing what you think. Here is a little more information about the general nature of the stone:

*Weathered enough that there are voids in the dark matrix areas where the metal grains have rusted out.

*Not a lot of metal. The grains are scattered and are mostly small but a few are larger.

*The chondrules vary greatly in size. Some are very small and a few are quite large.

*The chondrules are numerous and quite tightly packed together.

Good luck on your guessing. Sorry, I should say your very insightful reasoning of its type. You can send your results to jimSee Home Page For Email Address I will publish them next month.

Till next month and a report of the Tucson Show enjoy you meteorites.