Pulling its Weight in Science

The Beardsley, Kansas H5 chondrite put on quite a show when it fell on October 15, 1929, but only two pieces were recovered anytime soon after the fall. Although Beardsley is not a terribly illusive meteorite for collectors, complete individuals and pieces over 100g are almost never available. But through trades and purchases over the past year my collection has grown by three wonderful Beardsley pieces, each of which enriches the collection in its own way. 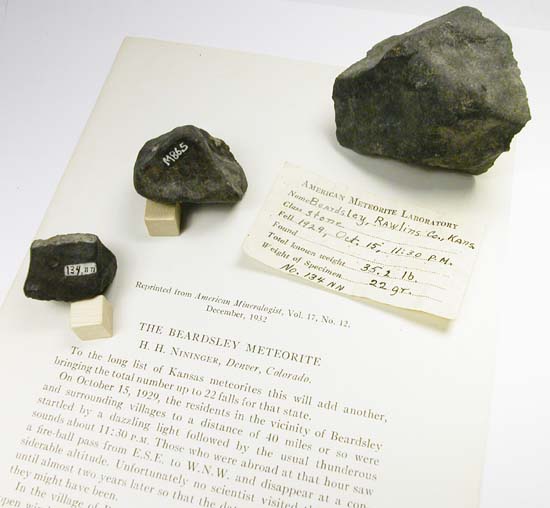 According to an article from American Mineralogist, Vol. 17, No. 12, December 1932, the journey of Beardsley from cropland to collection was an interesting story, and once again we owe our Beardsley specimens to the perseverance of H. H. Nininger.

To the long list of Kansas meteorites this will add another, bringing the total number up to 22 falls for that state.

On October 15, 1929, the residents in the vicinity of Beardsley and surrounding villages to a distance of 40 miles or so were startled by a dazzling light followed by the usual thunderous sounds about 11:30 p.m. Those who were abroad at that hour saw a fire-ball pass from E.S.E. to W.N.W. and disappear at a considerable altitude. Unfortunately no scientist visited the locality until almost two years later so that the data are not as definite as they might have been.

In the village of Beardsley Mrs. Ray Gaines leaned out of the open window on the north side of the house and heard distinctly the fall of two stones, one of which seemed to fall in the yard. A whizzing noise was heard preceding each impact. A search was made by the Gaines' during the next few days and two stones were found, one of 4 oz. about 20 meters east of the house was evidently on of those heard to strike. The other was found some 40 rods to the east and a little south of the house. This one weighed slightly less than 2 lbs. and lay on top of the lately sown wheat ground. It is very doubtful if this was the second stone heard by Mrs. Gaines who is quite certain that the one she heard fell to the north of the house.

The writer was in central Mexico at the time of this occurrence and word did not reach him until his return in late December. By this time the two stones had been sold to a collector in the east who was making an effort to recover any other stones which May have fallen, hence the writer did not visit the locality until August 1931, after being informed by the party that the two stones constituted in his opinion the entire fall.

On August 10, 1931, I instituted a search by a visit to the village of Beardsley and during the next 60 days was rewarded by securing six masses weighing respectively 15, 2.5, 8.4, 10.6, 43, and 328 oz. Some of these had been in the possession of their finders since October 1929. Others were found during the autumn plowing which was in progress at the time of my several visits during August and September.

All but the largest stone were found entirely on top of the ground. Three were found in pasture land the others on cultivated soil. The large stone was struck by the plow. Its upper surface lying at a depth of a little less than four inches.

The stones which were found two years after the fall seemed to be preserved about as well as those which were picked up within a few days of their arrival.

All of the stones are covered with the usual dark slaty grey fusion crust. Those which have lain exposed on the surface for two years have changed to almost jet black color where not in contact with the soil.

Nininger noted in his article that some inferences could be made about meteorite fall rates based upon the fall of Beardsley in relation to several other falls:

"An interesting fact concerning the Beardsley fall is in its relation in point of time to three other falls within the bounds of the eastern half of the United States, namely, the North Carolina fall of July 9, 1929; Paragould, Arkansas, Feb. 16, 1930; and the Miller, Arkansas, fall of July 13, 1930.

These constitute an unusual record of four falls (stones from which were recovered) within a twelve months period, or to be more exact a period of 369 days. If this area were taken as an index to the number of falls arriving on the lithosphere within the period under consideration, we should have to conclude that 532 falls landed on the earth during those twelve months.

As a matter of fact it is practically certain that less than half of the falls which occur in any area, such as the eastern half of the United States, are ever found. It is also possible that those four might represent an unusual concentration of meteoric impacts." 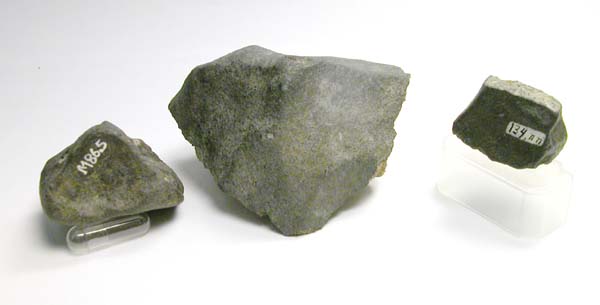 As the Earth's annual odometer clicks once again, it still remains important that we also celebrate the science meteorites have given us. Our science had to start somewhere, and 75 years ago when the Beardsley meteorite fell, though we did not know it at the time, one more piece of our cosmic puzzle moved slowly into place.