For the last several years we have worked really hard when we go to RTMC. Which for any new readers stands for Riverside Telescope Makers Conference. This year we worked a little less and took some time to enjoy the weekend. We actually made it to a couple workshops. One on CCD imaging and the other on astronomical image processing. I have tried some of what we learned on old images and hope soon to get some new images to work on. As I mentioned last month, Paul and I headed out to the country away from city lights to photograph Comet Neat. We did get some images and Paul will share that in his article, so I will move on to RTMC.

There is always a small group of meteorite dealers mixed in with the telescope and accessory vendors. Over the last few years the meteorite dealer numbers have dwindled. But, there are still plenty of great meteorites for attendees to see and buy. 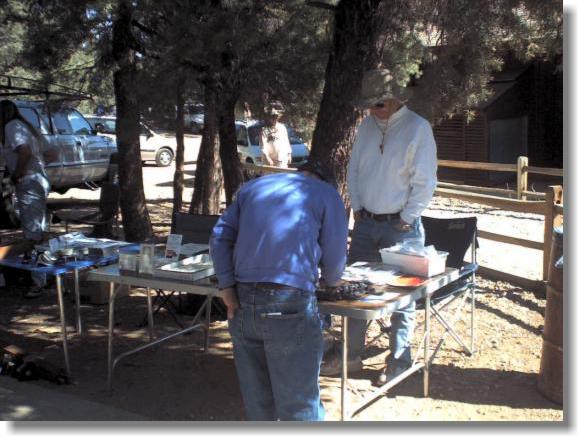 We set up on Saturday morning down at the swap meet. That’s where all the action is on Saturday. We thought we were up early enough at 5:45 AM. But, to our surprise the swap meet was already getting going when we got down there with our first load of stuff. I had some old telescope related items and mechanical clock drives that I wanted to sell. I had my normal supply of Meteor Crater books and CDs. A couple trips to the motor home and we had everything we brought to sell. We set it up on two tables and sat back ready to tell the story of tektites to any and all who were interested.

It wasn’t very long that Kitty Kilgore and daughter Laura put their table down next to ours and began spreading out nice Campos, books and other meteorite goodies. Now the meteorites people commanded a goodly chunk of sidewalk. We had a great time and knocked off in the early afternoon. We had a night of observing planned. We have not even gone out to look through scopes for several years we have been so beat after selling hard the whole weekend. This year we wanted take a look at what new things were up at the telescope field.

The moon was very bright this year so deep sky objects were some what restricted as observing choices. M13 seemed to be the object in most scopes. It is high in the early evening sky, and as one of the best globular nebulas available to us in the northern hemisphere it is frequently viewed. We looked at it in the 20 inch prototype of a new telescope, we saw it in a six inch refractor, and a 14 inch commercial SCT. But, without doubt the best view was in the amateur built 28 inch Newtonian. It was spectacular. We spent a couple hours looking through scopes and then retired for the evening.

The next day we attended the two workshops which were very rewarding. 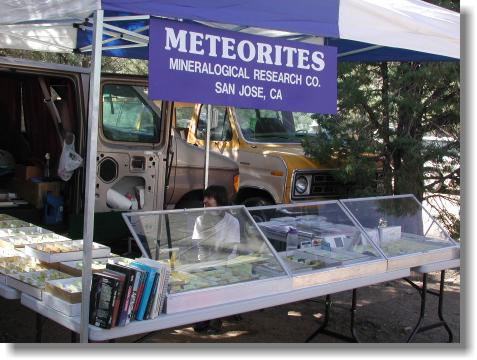 The two real regulars beside the Meteorite Exchange at RTMC are Mineralogical Research and Mare Meteorites. They both bring a great selection of specimens and books. As always Sharon and Eugene had some beautifully prepared irons and some slices of not so commonly seen meteorites. They bring up some minerals also since that is much of their business. It is easy to think that selling meteorites are what they do but it is only part. It is just what I happen to always see.

Mike of Mare Meteoritics is a long time vendor as well. I had a selection of NWAs. 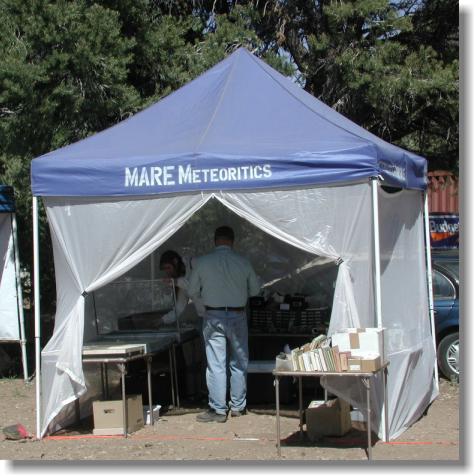 He had Ghubara, Sikhote Alin, and others. Some cute little Estherville slices caught my eye. I was really tempted by those but managed to keep the money in my wallet for once. He had some real finger pinching magnets for sell, and the sores to prove it. Seemed like every time we walked by he was playing with those magnets and every time he had a new wound from one. Great magnets for meteorite canes but, real care should be used when two are brought close to each other.

This was a different trip for us. We got some rest we needed and still sold our tektites and meteorites. We had some fine Shikote Alins ourselves which were quite popular. We had some chondrite slices and of course we had our woolly mammoth hair displays for sell. I did OK selling the stuff from my garage and I did not buy much to replace it. That is always the problem with swap meets. Next year I will get rid of some more, and in about fifty years I will have my garage back. Somehow I think I will end up renting a dumpster and make cleaning it up a lot faster. I have a back log of project to work on and no room.

It was a great weekend but, we sort of missed the times in the past when there were more meteorite people, and we had the great BBQ’s and story telling times at night.