To Clean or Not to Clean

For a number of years I have been intrigued by the prospect of cleaning meteorites with fine abrasive blasting. I had never done it. I had checked out the equipment at Tucson and other places. I had found it to be expensive. Way more than the amount I wanted to spend for the small number times I might use it. Still I thought it would be interesting to try. 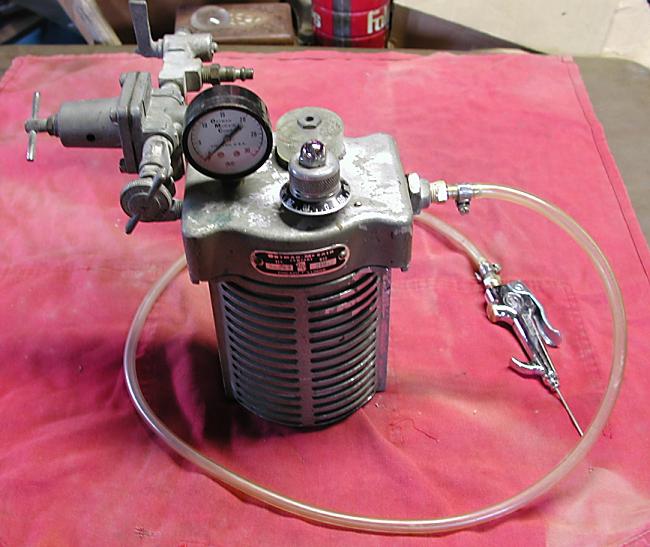 A few month ago my old Harris offset press was finally sent off as scrap metal. Before the old press left I took off the Ortman-McCain powder spray unit that had served me so well for 25 years; preventing offset of printing jobs. I wondered if it could not be adapted to spray fine abrasive powder instead of vegetable starch powder.

I am sort of known for making interesting machines out of old junk. This would be just one more project of many. I started modifying the fifty year old unit at 9 am and was done by 10:30. My regular blow gun worked for a test. However, it would be way too large for the type of work that I wanted to do on meteorites. It did tell me that I was on the right track with the Ortman-McCain unit. Printing equipment powder spray units are not designed to operate at high pressure. They have gauged regulators and secondary gauges to show the pulsed working pressure. This gauge topped out at only 30 PSI. I set it to that pressure and pressed the trigger. I got a spray of offset powder to blow out and that was encouraging. Now I needed a much finer tip and to connect some more flexible smaller hose. I chose ¼ inch clear plastic hose that I had around the house. I needed some barbed hose connectors too. I knew just the store about five minutes away that would have what I needed. A $3.99 kit that contained two barged connectors with normal air equipment threads on the other end, four hose clamps and one two ended barbed connector for joining hoses. Perfect, just what I needed. A tip of steel tubing only about 1/16 of an inch diameter and this project would be done. That was no problem either. Another half hour work and I was pouring out the old offset powder and replacing it with 220 grit aluminum oxide for a real test on a meteorite.

This kind of equipment needs to be used with a sealed box so the operator never breathes the dust. This test would be very short. I found a nice NWA 869 that had a good coat of scale. It had some nice rust spots also and brown spots in the scale. I took the unit out to the backyard in the fresh air, popped on the quick disconnect of my compressor hose and charged the unit up. I opened up the volume control for the air, set the needle valve control for the powder delivery, pushed the trigger and saw a burst of abrasive powder. It settled instantly to a fine stream. There must have been a little spilled into the hose from carrying the unit outside. Now to try it on the meteorite. Boy did it work great. I was surprised. It swept away the scale and dirt and rust like crazy. But it was soon totally ineffective. After the scale was gone it did nothing else to the meteorite. Or so I thought at first. Later when I examined the stone under a good light with magnification I noticed that there was a little polish to the surface that could not have been there under the scale. I think the abrasive blasting created that shine.

I should say at some point here that I personally like my meteorites in a clean, but as found condition. This entire project was more for the experience of doing it than to use the process very often. I only brush meteorites with an old toothbrush usually to clean off the remaining dirt. I might use the spray unit on an occasional low cost NWA stone with stubborn scale. It was fast and if used conservatively the results looked good. Clearly continued use in one area of the stone results in a little alteration of the surface. But, even with this experimental stone there is a great improvement in the detail visible and the hidden fusion crust was greatly improved.

I will probably get some fine glass beads and try the unit with that instead of the really aggressive aluminum oxide. Not a bad couple hours work and a few dollars. Learned a lot and got some interesting results. Now the harder part of building the dust proof glove box. It has to have a clear lid so I can watch the work obviously. I think it ought to have a light inside too. Maybe next weekend I will start doing that project.