Treasures are where you find them

It is pretty hard for me to pass up an old box of books at the swap meet. Recently, I was rummaging through just such a box and came upon several great finds. The former owner must have been a kindred spirit for I found three books that had no relationship to each other but were on three of my favorite hobbies.

The first was the 1938 edition of the Watch and Clock Makers’ Handbook. For more than two decades I have been a member or the largest association of watch and clock collectors in America. Our house and garage have well over the average number of clocks. To keep the noise down, most are not kept wound. And the strike and chimes are turned off on all of them. Get to know me very well and you are likely to receive a clock for Christmas. Ask Paul. It was a real treat to find an old copy of this classic treatise.

The second of the books was a first edition of The Telescope by Louis Bell from 1922. This work is just too wonderful for words. Every aspect of the telescope is covered in great detail from the making of lenses and mirrors to the description of at least twenty different mounts. It would surprise most of us I think if we knew how many "revolutionary inventions" of today had been done long ago. For instance in this book there is some time occupied in discussing Dolland’s achromatics, and his son’s triplet objectives. Even by 1765 it was known that three pieces of glass could better correct color than two. It is interesting to read about apochromatic triplets in a book from the 1920s. They are probably the most prized of the fast refractor objective lenses made today. The glass materials have changed some but the knowledge was around long ago.

I know none of this has anything to do with meteorites, but that is how it is sometimes. But, there was one more book remember.

And it in fact has nothing to do with meteorites either, but the author has. Forest Ray Moulton, Ph.D. and his An Introduction to Celestial Mechanics. It was and May still be a classics and required reading. When I saw his name and title in the old box I felt my heart leap. Moulton did the mathematical study on the impact at Meteor Crater.

He produced a small first report which was met with great opposition for it suggested a small body made the crater. To this Moulton responded, by producing a second very in depth report. I believe his second report on the crater led to the final stress, which took Barringer’s life. In only a couple days of reading the report Barringer suffered a heart attack and died. For many years the size of the impactor had been getting smaller. Barringer’s huge mass simply could not be supported by the evidence or found by exploration. But, it was Moulton who put it all together in a set of mathematical formulae. He took the millions of tons of nickel-iron needed for economical mining out of the equation forever. Today, we know that it was thousands of tons and that the vast majority was vaporized. But, like the optics discussed above, which had long genealogies to get to their present form. Vaporization of the impactor was suggested at the very start of the investigations at Meteor Crater. After Moulton it could be demonstrated mathematically.

I will never be able to do the math in his Celestial Mechanics book and have no desire to try. Just to have the work in my library and to have read through it is rewarding enough. He was a giant of his time.

Lest I be accused of being lazy or unmotivated about trig and calculus. I am going to offer a photo of a single page of the book for your enjoyment. It is a portion of the formulae for periodic variations, as in perturbations of orbits. Just the look of the page will make you appreciate your scientific calculator. 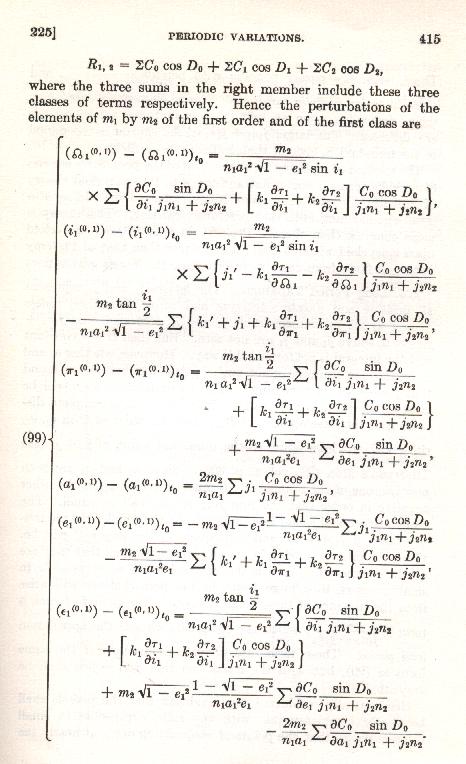 For the Meteor Crater report Moulton formulated 82 equations. It contained 1,300 individual computations. Though it placed the very highest mass of the body at 500,000 tons its implications were that the mass could much less than that. He deliberately used a low impact velocity. I have never gotten from my reading that this second report was very seriously contested.

The Internet is wonderful; it has become a tremendous source of information and offers great promise for exciting things to come. But, there is just something about a well wore book cover that draws me like a magnet. These three books were a delight and perhaps the best $3 I have spent recently.