One never knows what they will find when they set out on foot across a dry lakebed or are wandering in the hummock. It was about a year ago when Paul and I took one of our hunting trips up to Cuddeback Dry Lake. As fate would have it we took the road that was marked as what we should use and it was in actuality one road too soon. We meandered through the dark for what was clearly too long and said let’s just camp here and find the lake in the morning. It was an evening of great clear skies and a nice Moon. Usually we don’t plan trips out on weekends with a lot of moonlight since we like to mix the hunting in the daytime with astronomy and astrophotography at night. But, we had put off going out for a while and this was the weekend we could go. 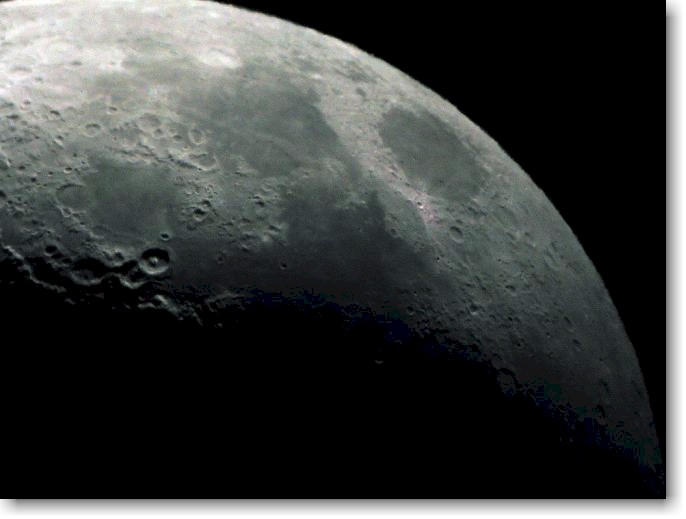 We checked the map in the morning and using the GPS grids determined that we were south and east of the lakebed and headed off to find it. As we came around a little knoll on the right the lake was visible before us. We parked somewhere near the middle and got our equipment together. Radio, GPS, water, snacks, camera; one by one we checked items off our mental lists. Soon we headed off to find some meteorites. I proceeded north up the lake and made my way to the west side. Paul took off southward working tight traverses across the lake. 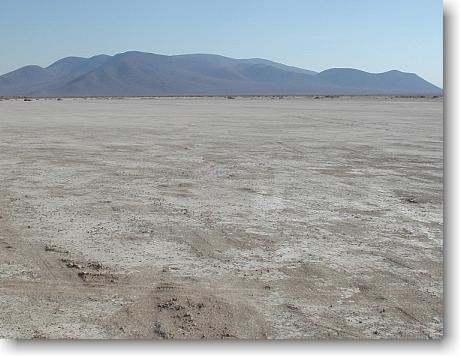 The motion of walking and shifting packs without fail causes one of us to bump the page button on a radio occasionally. A minor nuisance that as least has the side effect of letting us know that we are still in range of the other. On this morning I was moving pretty fast north and we were out of range within an hour or so. I was hunting in the hummock of the northwest side of the lake when all of a sudden I saw the remains of a pier and debris of a boat half buried in the lakebed. This was really strange. I had always thought that the lakes in the Southern California desert were long dry or only very shallowly covered with water in even heavy rains. I certainly did not think any got adequately flooded to have ever had boating. Well this demanded a picture and I could use a drink of water. So I stopped and got out my camera.

I was not alone on the lake there were some RV’s parked along the other side further up, and there had been some recent activity in the middle of the lake that I had passed on my way by. As I stood there drinking my water I looked out off the west side and saw the clear remains of some old diggings. Being always curious about old mines I took a side trip over to see them. It turned out to be a nice shaft with litter that indicated it had been dug a long time ago. There were a lot of darkly purpled glass shards around it and the rifle cartridges were not those of makers still in business. The waste rock pile was completely overgrown and the area looked undisturbed for decades.

I tried the radio, to see if Paul was moving this way and might be back in range. No luck. Soon I headed off across the lake to hunt the eastern side. It was heating up now. The morning had been very nice, but it was turning into a real scorcher. I found the east side to be a perfect hunting surface and spent a long time in the area. Got nearly over to the hummock on the east side but not quite.

Around noon I began making my way south and very soon saw Paul in the far distance. Eventually, we reached each other and shared our stories. I told him all the strange things I had seen. The digging in the center of the lake, and the pier with the remains of the boat and anchor, the mine shaft and the interesting stuff I found. We headed off to have some lunch. More hunting in the afternoon but not too much it was too hot. We needed to find a place to camp for the night. We had some great photo opportunities that weekend. The Space Shuttle and the Space Station were hooked together and would be passing near the horizon in the west. We wanted pictures of that and Paul wanted to take some astrophotos. I would set up my tracking cameras and take some too. 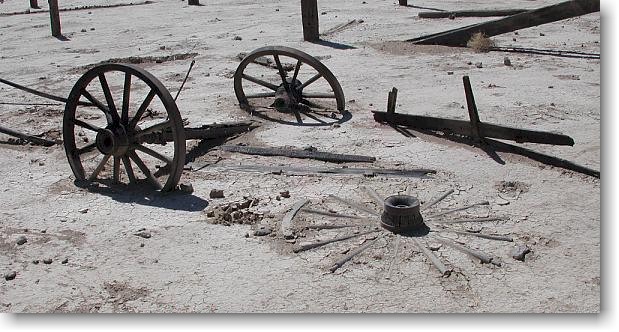 We did not find any more meteorites on Cuddeback that trip. As it turned out I was nearly in the area they had been found. We had been asked to hunt it without knowing where the recovers had been made to see if we could make use of first timer luck. It is not very scientific, but it is a thing that often happens. We have all heard stories of parking the car stepping out and someone finds the meteorite or beautiful fossil of the day right at their feet.

I guess after telling all this I should now reveal the rest. We have not talked about this part in other reviews of the trip. As I was taking my break for a drink and a picture at the pier and boat location a fast moving truck was making his way toward me. In a minute he was pulling up to speak to me. Always a little bit of an anxious moment when you are by yourself. He was security based from the name painted on the truck door. He asked what I was out in the heat for. I told him I was hiking and looking for meteorites. That always starts about five more conversations in itself. I said I was about to take pictures of the pier and anchor. Oh I didn’t mention the plastic cones that were set up around the location, sorry. Or the wooden sandwich things with the reflectors on them that you see on the road. He said it was OK to take some pictures and began to describe what he knew about the movie that was being filmed on the lake. That helped a lot to explain the HOLES that had been dug in the center of the lake. Of course I had seen the tops of the big outdoor lights that were stored just up from there on the side of the lake.

Paul and I had picked one of the last weekends that they were at Cuddeback filming the movie that has just recently been released into theaters. I have not seen the movie. If any of you have you May recognize the pictures shown here. Sometimes it is rattlesnakes, or coyotes, or desert tortoises that we see. Some times circling birds of prey, that prompt us to check and make sure we did bring that water bottle or two. Other times it is a major studio and their sets that we see. But it is always an adventure. Till next month, Jim