An Article In Meteorite-Times Magazine

This feature is devoted each month to one of the personalities within the meteorite community. This month we are delighted to share an interview we had with Meteorite Dealer Eric Twelker of The Meteorite Market.

What or who got you interested in meteorites and how old were you when you got your first meteorite?

It seemed like meteorites and I were just a natural fit. For many years I was a mining exploration geologist--sort of a modern day prospector/treasure hunter but with a scientific bent. Even after I gave up geology and took on a second career as a lawyer, I retained my interest in rocks. Since the early 1990s, I have gone to the Tucson show. It was there that meteorites attracted my attention. I am not sure what got me interested in meteorites--just the idea of rocks from space intrigued me. The science is of interest, but so are the fun of finding and trading them. So far the finding has been only of the desk-bound or vicarious sort. I have to admit to being a late-comer to this business. I was 45 when I got my first meteorite--at least I think so. As a geologist I broke and looked at about a million rocks. Looking back, I can't help but think that one or two of these might have been meteorites and I just didn't know it. Now, at age 53, I am now a full time meteorite dealer.

I can't recall for sure. It could have been a 6kg Gibeon from Bud Eisler, a flat of Canyon Diablos from Marvin Kilgore, some Sikhote-Alin fragments, or perhaps a tumbled Odessa from Bob Haag. I think I bought them all at the same Tucson show.

Do you have special areas of interest that you focus on in regards to meteorites (thin sections, photography, chemistry, age dating.. etc)?

This is a tough question. I would say not really. First and foremost, as a dealer I try to serve my customers' interests. Since they are interested in the science, I try to focus there. I especially like to provide good samples to people doing meteoritics research. But that is by no means a majority of my business. Mostly I cater to collectors. For them, I try to provide what information I can on the rocks and try to stock specimens of scientific interest. I also try to provide good looking stable specimens. And in fact, I spend quite a bit of time and effort trying to figure out what the best way to do this is.

Does your Family share in your interest in meteorites?

Yes, to varying degrees. My wife, Janeann, and my two sons (Evan 21 and Karl 19) have helped me in the business at various times. Janeann is a former geologist and Evan is a geology major at Middlebury College. Karl is graduating from high school this year and will study some sort of science at Middlebury next year. It wouldn't surprise me to see one or both of my sons enter the serious side of meteoritics--but that is seeing too far into the future.

Do you have a collection?

I am one of the few dealers that is not a collector. The meteorites that come in and go out here are the ones I think my customers will want. If I get a particularly fine piece, it goes on sale. In fact, most of the specimens pictured on this page are not mine anymore. The Canyon Diablo, the DaG 400, and the Gujba are in others' collections now. I haven't kept track of how many different finds and falls I have had, but over they years I bet it has been over a hundred. That is not a lot compared to many folks, but it has been enough to have some fun with.

Are your meteorites displayed or kept in a dry box or both?

For me, keeping meteorites is keeping inventory. I use Rubbermaid food containers with desiccant bags. I tape moisture indicators on the inside of the box where they show to the outside. This keeps the rocks dry, but it is not much for display. (Which is no matter since they mostly stay in a safe anyway.) Keeping meteorites dry is a never-ending battle. On occasion one will get rusty, but most times repair is possible. For the bad ones, I like to experiment with different techniques for repair and preservation. Some of them grace the shelves of my office just as experiments. I have put a few of my thoughts on this subject on a preservation and repair web page, but I have to say that it is woefully out of date.

I can safely say that I wouldn't be in the meteorite business if it weren't for computers and especially the Internet. When I bought those first meteorites I mentioned a bit ago, my plan was to find a way to sell them to the thousands of tourists that come through Juneau every summer. Shortly after I got home from Tucson and before I had time to think about my plan, I attended a promotional talk on this new and up-coming thing, the Internet. It struck me that this was the way to sell unique items like meteorites. A photograph would make all the difference and I could publish it for essentially nothing. I checked and surprisingly there weren't any meteorite sellers out there yet. So with the one megabyte of "free" server space that came with my email account, I set up a web page. I didn't have a digital camera or a scanner so I had the local copy shop scan a sheet of photos. I put them on the new web page along with a lot of background information and waited for my first sale. I think I waited a couple of months--or so it seemed. But pretty soon people were writing every day and the business was off and running. To go back to your question, every part of my business is centered on the computer. Because of computers and the reach of the Internet, I have been able to do business world-wide from a small isolated town in Alaska.

This is one part of my meteorite experience where I haven't done as much as I would like. I like to plan trips, but it's only on rare occasions that I actually go anywhere. I hope that changes in the future. I did do some serious hunting in one instance. My sons and I went up to Tagish Lake and spent a few days crawling through the bushes to no avail. This was despite the fact that we knew exactly where to look. You can see from the photo what a frustrating experience this was--especially when you consider that this meteorite melts in the rain and it had been several months since the fall. Better luck came to me when local back-woodsmen who had more time to spend came to me with specimens they had found. My forte just seemed to be encouraging them with the Canadian government's export paperwork. 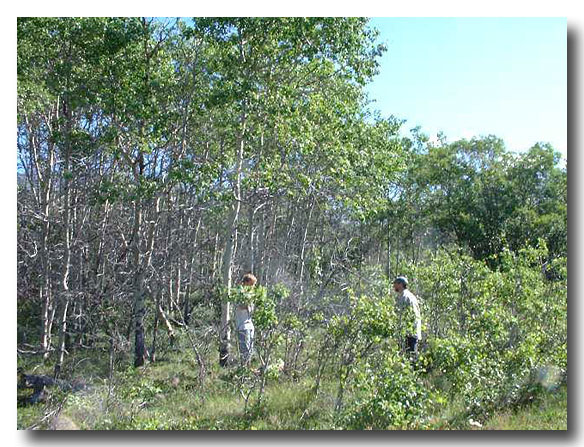 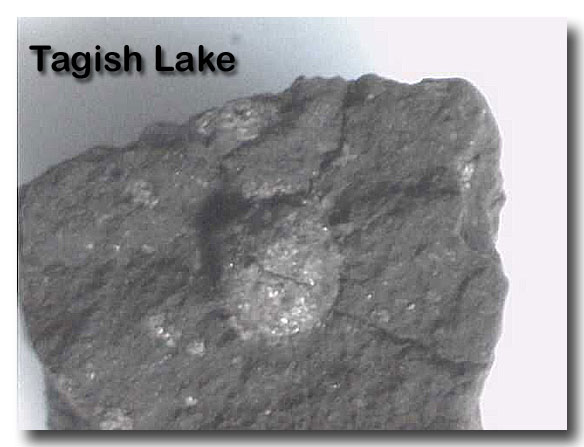 What is your favorite meteorite?

This is a tough call and Tagish Lake would have to be in the running. With all the scientific interest, it has brought much attention my way. Still, I would have to say my favorite is the Bencubbinite, Gujba. Because I brought this meteorite out of Nigeria, I have a personal interest, of course. But by any standard it is one of the prettiest and most intriguing meteorites there is.

Beauty is an obvious answer, but there is more. The research is by no means complete on Gujba, but it looks like it formed from vaporized material in an asteriodal collision. The iron nodules and silicate chondrules seem to have formed almost instantly. I expect that when the work is done, it will teach us something about formation of chondrules from the solar nebula. I am also intrigued by the relationship of Gujba (and Bencubbin and Weatherford) to the mesosiderites.

Anything new, anything that will sell. I like unequilibrated and carbonaceous chondrites a lot. And right now I am looking for big ugly irons to cut up.

What methods have been most successful in building your collection? (Buying at shows, from dealers by mail, auctions on the web, trading... etc)

Mostly I just take opportunities that come my way. Because I have been around for a while and we are so widely linked on the web, people bring things to us. I suppose a downside of this is the people with driveway rocks who write every day asking me to buy their valuable "meteorites." I try to be polite and identify the rocks as best I can. I don't like to discourage them because once in a while a real one pops up--of course then it is tough to make a deal because they want a gazillion dollars. I should also mention that I like to trade with other dealers, though being the quiet type, I usually await their proposals.

Yes. Lapidary is a big part of my business. To me this is both a fun and frustrating. I like to play with my machines and figure out better, more efficient and cheaper ways to cut and polish. It can get tedious at times--and it is dirty work with some nasty chemicals.

All in all, being a meteorite dealer is a lot of fun. I enjoy both the rocks and the people that are attracted to these rocks. I am always willing to take a shot at someone's question about a rock or what would be a good sample to build a collection or any other meteorite topic. And, finally, I appreciate the chance to share some of what I do with the Meteorite-Times and the meteorite community. Thanks!